Hey everyone!
It’s been something of a quiet week here, hence the solitary game-day blog on Tuesday I suppose. Did anyone read it? It’s about Dominion, the grandfather of the deck-building games, and one that I often enjoy, but rarely get to play. See, deck-building games have evolved so much since Dominion burst onto the scene that going back to the original can sometimes be a little, well, boring. Take, for example, Marvel Legendary, which is a deck-building game where you also get to fight classic Marvel villains (or heroes!) as you build your deck. Or Thunderstone, where you have the option of acquiring cards in the deck-building manner or delving into a dungeon to fight monsters in your search for the legendary thunderstone. These games, with their increased options that have refined the deck-building genre into a more recognisable game usually find their way to the table more often than the one that started it all. A shame, really.

This coming Tuesday, I hope to do something a bit different with my game day blog, so hopefully you’ll all enjoy that!

I have an essay due next week, so have been working on that for the past few days, also. Have you read the Odyssey? It’s a really good book anyway, but studying it can make it so much more interesting. The book details the return of Odysseus from the Trojan War, when he finds his palace overrun with suitors to his wife Penelope, all of whom believe he is dead. The book begins with his son Telemachus on something of his own hero’s journey, and the essay poses a question about hospitality in the ancient world as seen through his experiences. It’s a cracking read, like I say, but the translation that forms the set book for my course is really uninspiring. If you’d like to investigate what on earth I’m talking about, I recommend the Penguin translation, by EV Rieu. I used that when I studied the Odyssey at A level, and it’s much more readable.

I’ve been reading The Fall of Altdorf since its release earlier in the month, and finished that at the beginning of last week. The second book in the End Times series, it loosely follows on from The Return of Nagash, though the events of that book take on much more of a back seat. At the end of the first book, Nagash raised Vlad von Carstein back from the dead (again), and that provides the link here. In this book, we see the forces of Chaos march against the Empire, with the Vampire Counts forming a third arc to the story. The book has obviously strong ties to the Glottkin release it accompanied, so we see the pestilent swarm cutting a huge swath through the Empire, decimating all that it leaves behind.

Please be aware, I’m discussing spoilers for the book here!

I was really, deeply impressed with this book. While I have, to some extent, enjoyed every Warhammer novel I have read so far, this one was like a new experience for me, as I devoured as much as I could of it night after night. I’ve never really been all that interested in the Empire before – it’s always been just the humans in a setting with much more fantastical creatures to pique my imagination – but Chris Wraight has successfully interested me with this book! I already have the Swords of the Emperor omnibus, along with Luthor Huss and the War of Vengeance novels, so have now moved onto Luthor to see what I’ve missed! Of course, it feels a bit daft, as the Empire is pretty much left in tatters at the end of this book, with some pretty major characters killed off or MIA. Currently, Luthor is one of the latter, so at least there’s the outside chance that we’ll see him again. But what on earth was all that stuff with Karl Franz? Jeez! Looks like this book might also have been the turning point in the End Times: while in book one we saw the great necromancer Nagash rise, presumably with evil intent, here we’ve seen the rise of “a new god” to possibly oppose this. Makes me wonder if the series will end with something like triumph, but I suppose we’ll have to wait and see.

At any rate, I really enjoyed this book, and cannot recommend it enough. Pretty much every GW store I’ve been to still has copies left over, so it shouldn’t be as hard as the Nagash novel to pick up, anyway! 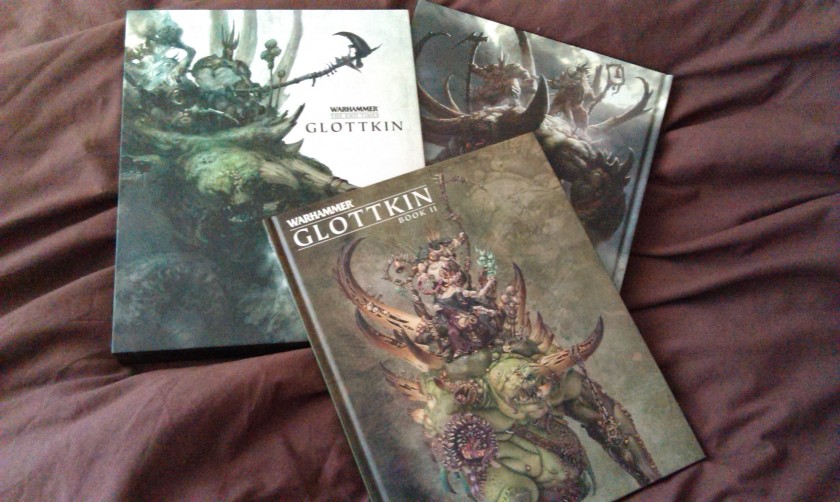 The two-book release for the Glottkin continues the standard of that for Nagash, though they do appear to be a little thinner than the first set. Hm. At any rate, beautiful artwork and amazingly painted miniatures accompany the story of the fall of Altdorf, laid out in a series of chapters that almost form set-piece battles in the first book, which are then given battleplans and rules in the second for you to recreate on the tabletop.

On the subject of Warhammer, remember my Tomb Stalker? That painfully intricate model that took me about two weeks to assemble and paint? Well, he fell off the bookcase last week, breaking the body in half, and snapping most of the legs off. So it was a pain in the ass but I managed to put him back together again, and I’m hoping that you can’t tell… 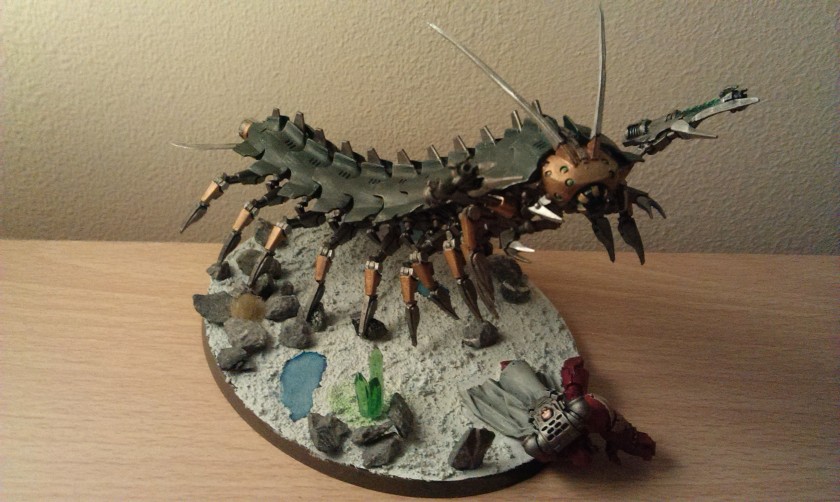 I’ve decided to keep up the tradition of Big Game Saturdays leading up to xmas, so following on from Runebound last weekend, I had an epic game of A Touch of Evil, with the Something Wicked expansion thrown in. That proved to be a really awesome game, and really goes to reinforce just how much I enjoy that whole game line! 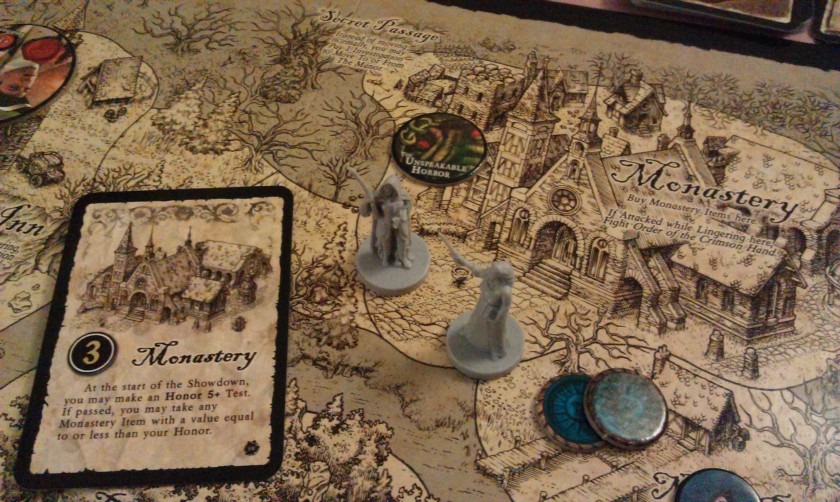 Epic, and wonderful! I think next week I might give something like Eldritch Horror an outing, as I haven’t played that game since May…

Going back to Flying Frog, however, we had another Shadows of Brimstone update this week, which told us that the games are currently stuck in transit between Germany and the UK, but should hopefully be shipping out within the next week. I’m starting to lose faith in this, to be perfectly honest, as it’s been taking so long and stuff, but we’ll see what next week brings! I’m sure, when the game and all the additional kickstarter goodness is in my hands, this will all be a distant memory…

My other kickstarter nightmare, Fallen, seems to be going equally badly. It’s coming up to a year since the game was initially supposed to be shipped, of course, and the most recent update (which arrived this morning) puts it at four weeks before we should all have the game in our hands. That seems to be cutting it awfully close, to me, and I don’t actually expect to have it before xmas. Of course, I might be pleasantly surprised, but still.

These two experiences are really putting me off the kickstarter thing, anyway, and I’m thinking I might not actually bother with any more. But anyway, at least Lagoon was a breeze! I still want to try that game out…along with about a dozen others…