Time to return to the #HorusHeresy…

It feels like an age since I finished reading a book! According to the above instagram photo, however, it’s been almost a month, and more than two since I last read a Horus Heresy novel. At any rate, I’ve finally finished reading the ninth novel in the Horus Heresy series, Mechanicum, so thought I’d come here and share my thoughts, as per usual!

In short, I didn’t like this book. This has nothing to do with the writing (Graham McNeill is one of my favourite genre authors, as I’ve mentioned previously on this blog), but rather the subject matter. I know the Adeptus Mechanicus is a popular thing for lots of Warhammer fans, shown especially when they launched as a distinct faction for the tabletop miniatures game, but despite trying to be interested, I’m just not all that interested in them. The story of this novel deals with the Schism of Mars, and I feel it sets up a very important element of the overall Heresy storyline, but I found it far too uninteresting, and sometimes went almost a week between chapters.

The book has three story strands that coalesce towards the end, though I do feel that one point is left hanging somewhat awkwardly. First of all, we have the story of Dalia Cythera, a latent psyker brought to Mars to help build a machine called the Akashic Reader, which is supposed to be able to harness the power of the Warp enough for a more capable psyker to delve into its secrets. She does so, but the initial run with it involves draining power from the Astronomican, and causes a massive catastrophe yet it is strongly suggested that some of the knowledge from the Warp was collected, but we never find out what. Touched by the psychic power unleashed, Dalia begins to dream of a dragon locked beneath the Noctis Labyrinthus, and travels across the red planet to free it. What she finds there, however, is not what she expected.

The sponsor for this work is Mechanicum Adept Koriel Zeth, who is something of an anomaly in the Adeptus Mechanicus in that she believes more in the supremacy of science than the power of the Omnissiah, something that causes a rift among her colleagues. Her forge at the Magma City becomes a centre of attention as the story progresses, as one of the few forges that escape the conversion to the Dark Mechanicum.

This is something that I’d heard bandied around by 40k enthusiasts for a long time now, in terms of modelling an army and the like, so I thought it intriguing to read about it all. Basically, Regulus, the Mechanicum adjunct to the Sons of Horus from back in the original opening trilogy, returns to Mars with the offer of an alliance with the Warmaster and Mars – if the Fabricator-General agrees to supply the Warmaster and his allies over the rest of the Astartes, Horus would not only give full control to all of the galaxy’s Forge Worlds over to the Mechanicum, but also provide the original Standard Template Construct database recovered from the Auretian Technocracy (detailed in the second novel, False Gods), and would provide the key to unlocking the fabled Vaults of Moravec and all the technology held there. The Fabricator-General, Kelbor-Hal, agrees, and the Vaults are opened, revealing a host of Warp-enhanced servitors and Skitarii, as well as a virus-like “scrap code” that proceeds to infest the majority of the forges of Mars. Kelbor-Hal then begins production of a titanic new ship for the Word Bearers Legion, Furious Abyss.

Something of a power-play takes up the central portion of the novel, as the Titan Legions posture before finally declaring all-out war. Legio Mortis strikes the forge of Koriel Zeth, who is defended by Legio Tempestus. The novel ends in something of a bloodbath, with only one machine of the Legio Mortis left standing – that is, until Koriel Zeth releases the safety protocols on her Magma City, basically wiping out her entire forge in a sea of magma.

Despite what I said at the beginning there, parts of this book really interested me, and I found a lot of it really enjoyable. I think the politics of Regulus and Kelbor-Hal were the outstanding parts for me, as they had the strongest tie to the overall Horus Heresy storyline, which is what I’m really keen to learn more about. The rise of the Dark Mechanicum, while a little weird, is nevertheless an important part of the lore, so I was glad to discover more about that.

Dalia’s storyline started out really intriguing, especially as they managed to make the Akashic Reader a reality. However, I was left feeling a little cheated when the suggestion that it had, in fact, worked went unexplored. The storyline lost most of its interest for me as she traveled the planet to the Dragon of Mars, which was a little too crazy at times – though I have since read that the Dragon might be one of the C’tan, which is exciting for a Necron player such as myself! Dalia’s storyline ends fairly abruptly, too, which I was surprised by, though perhaps this is going to be picked up in a future novel?

The third storyline in the book is that of the Titan legions, and while I’m sure it was meant to be as interesting as the others, just confused me from the start, and I found most of it just boring. There are a lot of characters in this book, which is nothing really new for the Heresy series, but having almost every warmachine rider as a named character, across the whole Titan Legion, led to me losing interest as I couldn’t keep up. As the story progresses, this strand becomes increasingly foregrounded, which didn’t help in the slightest, and I think led in part to my disinterest in the novel.

Overall, I’m glad I read it, but I think I was expecting a lot more than what we received. The parts that disinterested me unfortunately outweighed the parts that I found to be interesting, which has led to me feeling less than positive about it. At any rate, if you like the Adeptus Mechanicus faction, you’ve either read this already, or else should definitely pick it up. Otherwise, while it has some important impacts on the overall Horus Heresy, I feel it could be summed up as “Regulus starts a civil war on Mars, leading to the Mechanicum largely following Horus”.

Fifteen weeks in, and my laziness has returned! I’ve been pretty organised with my time over the last week, unfortunately that time-management didn’t make much room for painting! As a result, I have a pretty short blog for this week’s progress…

First of all, the Treeman Ancient is now finished, and looks absolutely beautiful, even if I do say so myself. He’s since been primed black, and stands proudly among a whole host of other things that have also been primed black but are awaiting further work. I absolutely love this model, however, and have been pondering getting a second, though I think I’m going to get this one sorted properly first. Super fun to put together, though – and as I said, it looks incredible! 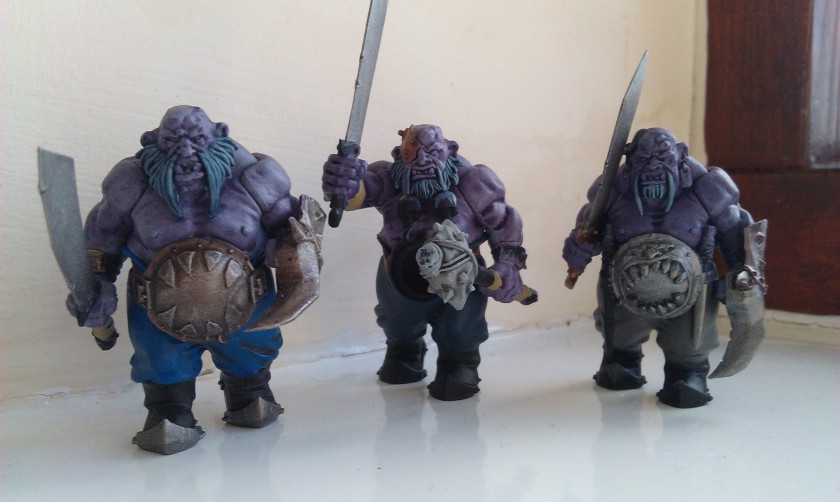 I suppose these chaps do look a little misleading for being featured in this blog, as I’ve not really done that much work on them. They’re some of the Ogres/Ogors that I’ve been painting off-and-on for over a year now, and this week has seen me paint… their beards. Don’t get me wrong, I have like twelve of them on the go, so it’s still something of a decent undertaking. But yeah… One day I’m going to have an army of these guys – but that day will not be any day soon!

Let me take you back to January, for a moment, when I first assembled three of these Electro-Priests. I don’t honestly know why I didn’t assemble all five, but then it isn’t the first time I’ve done this. At any rate, I have been slowly working on the three, which had been primed in white roughly around the time my local GW store had a “Paint it White” event, for which I painted some White Scars. The Priests took a back seat, therefore, and I returned to them this week really for a bit of respite from weeks and weeks of painting Space Marines.

Unfortunately, the white primer had gone on really very grainy, and in painting their robes with Screaming Skull, it became really noticeable. I’ve persevered, but in doing the gold I became really annoyed with how chalky the primer coat is. Yesterday, therefore, I built up the remaining two and primed them black, and so far have done the skin and robes, as you can see. I do think that Chaos Black spray is just superb and wins over the white, even though I want to do the robes really light, so I guess it’ll just be multiple layers to get the tone right! In the picture above, both white-primed and black-primed Priests have had three coats of Screaming Skull on their robes, and I don’t really think there’s a lot of difference between the two. The skin I’ve painted in Eshin Grey, and have shaded it on the white-primed trio with Nuln Oil. In the lore, Electro-Priests are so consumed by the power of the Omnissiah they kinda burn up from the inside, and it has long been my plan to paint them with charcoal-grey skin to signify this process. The scarring I want to do in a lighter grey, and I’m currently undecided over whether to paint the details in red or green, hence the flash of green you can see on one of them.

I really love these models, the level of detailing is superb and, while some of them are a bitch to assemble, they look fantastic so are well worth it. Given how disappointed I am with the white primer, I’m currently weighing up whether I want to get another box, but I think that’ll also have to wait for the moment.

And finally, while we’re on the subject of building…

I assembled this chap this very day! I picked up some Lizardmen the other week and haven’t done anything with them up to this point, but had been pondering whether I want to get the Start Collecting box, given its insane value, but have so far resisted. I have to say, while I love the Lizardmen, the models are fairly old now, and the mouldlines are just awful, particularly on the torso of this one, which looks like the mould had slipped or something. Hence, for now, he is very much alone as I can’t face putting any more together right now! That said, I do still have two resin Lizardmen sort-of built up from my previous attempt at them…

At any rate, that’s pretty much all I’ve done this week. Work has been ridiculous, but I’ve also been trying to get on with my degree work, so haven’t had much time, as already stated, to get a lot of painting done. I have some time off in the coming week, however, so I hope that I might be able to get some more done by next week – in particular, I want to actually get some more models finished and off the work space (read: dining table) rather than having them scattered around all the time.

Until then, here’s an instagram post I shared yesterday to celebrate the 30th anniversary of the Space Marine; a selection of those that are pretty much complete!

Happy 30th Birthday to the awesome warriors of the grimdark! #Warhammer40k #SpaceMarines #GamesWorkshop