Hey everybody,
Today’s game day blog has been a long time coming, let me tell you! Today, I’m finally getting round to talking about the third edition of Arkham Horror! I first played this game in January, and have been meaning to do a first impressions blog pretty much ever since! Having recently returned to board games to some extent, though, I thought now would be a good time to feature this game here. So, without further ado, let’s dive in!

The third edition of Arkham Horror came out in 2018, so I’m already late to the party. It’s had a pretty huge makeover since the second edition, as well, no longer having the traditional board that represents the city of Arkham, but rather a series of tiles that are interconnected to form the map for each scenario. This is now most definitely a scenario-driven game, as opposed to the classic “just try to survive” of the earlier version, which I suppose could be boiled down to the same game each time you play it, just with various tweaks and so forth. 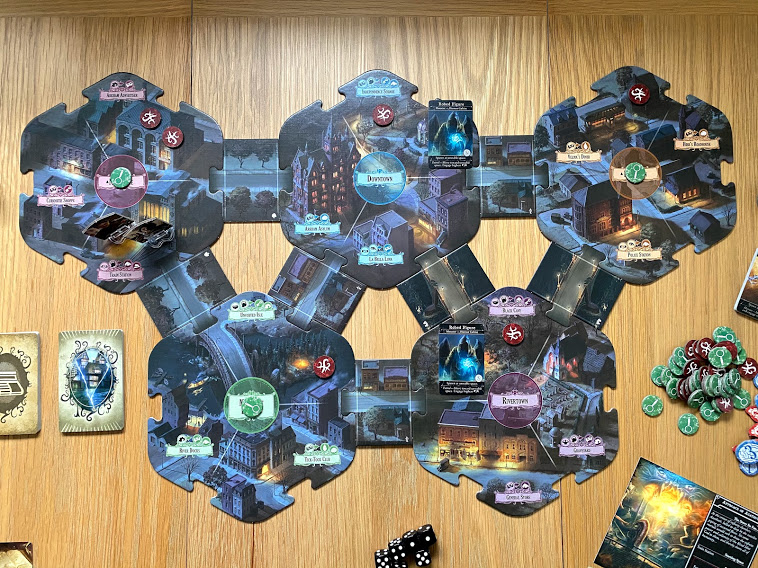 Third edition is built to give you a new experience each time, through the use of scenarios tied to the Great Old Ones, rather than simply going up against them that we’re used to. The game was redesigned by Nikki Valens, who was also heavily involved (if not responsible for) the ongoing development of Eldritch Horror after the core set, and so there are a number of classic Arkham Files beats coming through loud and clear.

Each scenario has got its own win condition, and you don’t always know what you need to do to win. This was a little bit disconcerting to me at first, because I had a bit of AP as I tried to decide what to do with my actions. But then I just embraced it all and it’s actually an incredibly effective and thematic way to go about this type of game! The game uses this idea of the “codex”, a collection of cards placed next to the scenario sheet, which represents the changing objectives throughout the game. So you’re not simply trying to gather clues to throw at the monster, or whatever, and there are both success and failure paths to follow as the story unfolds. It takes some getting used to, but it’s actually really nice and very flavourful when you get into it.

The game is played across 4 Phases. To start with, there’s the action phase, where the investigators get to do their thing. The monster phase comes next, with monsters moving and attacking the investigators. The AI for monsters is somehow slicker than 2nd edition, which was itself quite nicely done. Here, they either move to a specific investigator, or to a specific location, or they just cause chaos by adding doom. Monsters are represented with cards in this edition though, which is a little more tricky to manage on the board than the tokens of 2nd edition or other Arkham games. 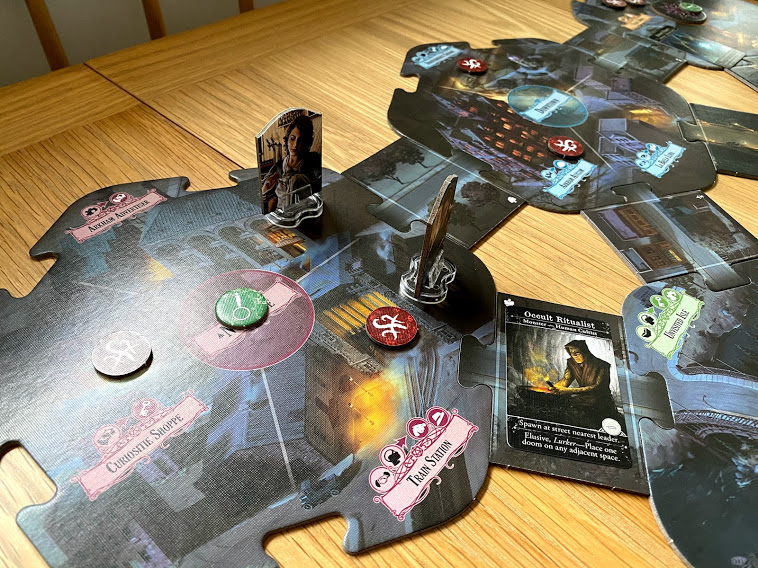 The encounter phase is next, and this is similar to other iterations where you draw a card and have a short adventure, usually involving a skill test of some sort. Some encounters have been seeded into the deck by the scenario, and will allow you to further the investigation with clues. The last phase is the mythos phase, where players draw a token from the mythos cup, and resolve its effect. These can spawn clues to spawn monsters, resolve the reckoning effects of cards in play, or resolving a headline – a new type of card that kind of acts a little like mythos cards of old. The tokens are interesting because there are also blank ones, which add an element of surprise, but you also don’t throw them back into the bag after drawing them until all have been drawn, so you can get an idea for how good or bad a mythos phase is going to be, based on what has already come out.

At its core, third edition is very much a blend of second edition and Eldritch Horror, with some new or streamlined elements that make it feel very much like a new game. While I’ve been happy to play and replay second edition many times, I think third edition has an increased replayability simply from the scenario aspect. The Codex is a very interesting idea as well, as it contains a bunch of numbered cards that are added in as determined by how the game is going, but are used in varying ways across the scenarios, allowing for some interesting gameplay as time goes on.

Gates don’t really exist in this edition – instead we have Anomalies, which don’t appear in every scenario, but are functionally the same as Gates of old. You can enter an Anomaly and have an encounter, which might help to seal it, or you can attempt to Ward Doom to prevent one opening in the first place. An interesting addition is the Remnant token, which some monsters leave behind when you defeat them, or from removing multiple Doom tokens with a Ward Doom action. They can later be spent for profit or to help with casting spells, which I find super thematic!

Third edition is a very different, very interesting game that I think definitely needs a lot more exploration to see what it has to offer. I find it a very interesting amalgamation, between Eldritch Horror and Arkham Horror second edition. There are also elements from the card game present, in terms of how the game is strongly tied towards the scenario, and being a big fan of that game it is very nice to see.

I do like second edition, and the opportunity that it has for telling your own stories. I do love Eldritch Horror, and the global scale of adventure and exploration that it gives us. I also love the card game, as has been well-chronicled here on this blog over the last twelve months! This third edition doesn’t have anything that I could say really detracts from it, in my view. It’s a solid addition to the game line, pulling elements from across several other games to make something very thematic from the previous version.

So far, we’ve had two small box expansions, and one big-box, coming at a rate of one per year. So we’re seeing a fairly steady stream, but nothing that seems to be difficult to keep up with. In a new move for me, I’ve not bought into any of these yet, although I have been eyeing up the most recent one, Secrets of the Order, as I love anything to do with the Order of the Silver Twilight! It will be interesting to see how these expansions integrate into the base game, in the fullness of time of course! For now, I definitely need to try and play the core set some more, even if I just play each of the four scenarios once!