Hey everybody,
Over the past few days, I’ve been managing to juggle looking after my now two-week-old daughter while also deep-diving into the House of Blades for Necromunda, I honestly don’t know how this has been achieved, but I’m just going with it and somehow managing to help keep a tiny person alive (full disclosure: my wife does the lion’s share!) and also throw around ideas for a starting gang. Having now picked up the Escher reinforcements, as well as the Escher plastic weapons set, I feel like I’m now poised on the brink of greatness here! 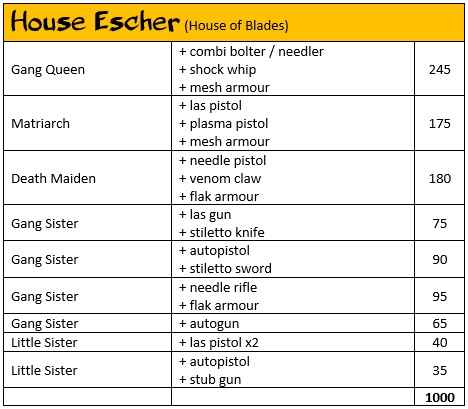 So this is very much my first effort at creating an Escher gang. Back when I first picked up the boxed game, I built up the Escher side of the box pretty much as the instructions told me, without knowing anything about anything. So I already have ten gangers built, but I don’t really want to play that type of gang, as I feel as though it’s a bit boring. As an aside, I can’t believe how non-descript the Escher sprue is – the weapons are all pretty basic things, there are no special weapons beside the chem thrower and combi needler! I’m so glad that GW has finally brought out an affordable upgrade sprue, because these gangs really need it! I just hope they actually produce such things for the other gangs (wouldn’t it be awesome if the reason why the Enforcers and Corpse Grinder Cult hasn’t had any Forge World upgrades is because they’re going to make them in plastic instead?)

Now that I have Hive War, I’ve got ten more Sisters to build, and I definitely want to make sure that I’m building them the way that I want!

In the above list, there are only three more gangers to build: the needle rifle, the autogun, and the Little Sister with autopistol and stub gun. Only the autogun comes in the base gang set, so let’s give another cheer for the plastic upgrade set! 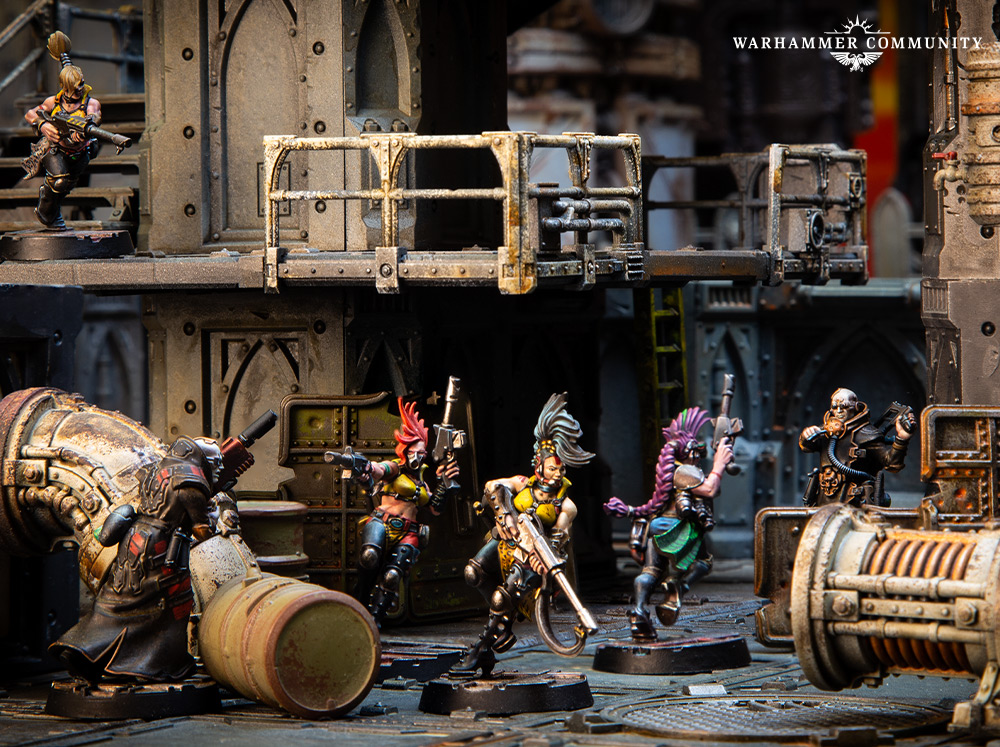 This gang is the first time that I’m including juves – for the Escher, we’re now calling them Little Sisters – and I have to say, I don’t know why I didn’t do this earlier. While the leader is always going to be a touch on the expensive side, having juves does allow you to then include either a couple more special types, or just more bodies in general. As an aside, I’ve gone for the needle rifle on my specialist Sister (ganger), which is only a slight extravagance – I think my very first thought of including a plasma gun in the list meant that one ganger cost 160 credits! Far too extravagant! I have given her flak armour, to at least try to ensure she stays with me, but after talking it over in the Escher facebook group, flak armour (most of the time) is a bit of a waste of credits across the whole gang, because it will work so rarely, but can be the cost of a whole other ganger if you cut it entirely!

I’ve also picked up the reinforcements kit (are we calling them that?) with Death Maidens and Wyld Runners, and the cats. I love the variety that these things give, especially how the earlier kits like that for Escher are basically just more of the same, albeit with much more exotic options. I do feel that stuff like Van Saar and (particularly) Delaque have had some very weird reinforcements, but anyway. I wanted to include one of the Death Maidens because I find them utterly fascinating, and I think it’ll be an interesting sort of game to have an undead Sister running about. The lore on these things is very creepy, and I think it definitely adds depth to the House.

While I’ve mostly been plotting my list and reading up on the lore while giving my wife a break from dealing with Freya, at the weekend I was actually able to grab about an hour’s hobby time during the day, so built up the Death Maiden as well as threw a bit of paint on some gangers! I’m still not 100% sure on the sort of colour scheme that I want to go for – I had been considering a violet and maybe green theme, then I thought maybe about doing something with orange, but now I’m leaning more towards having a grungy sort of look, and only picking out things like the feathers in brighter colours. I mean, this is the Underhive still, and I’m not entirely convinced that the gang would be able to keep their boob armour that pristine yellow on the box art… 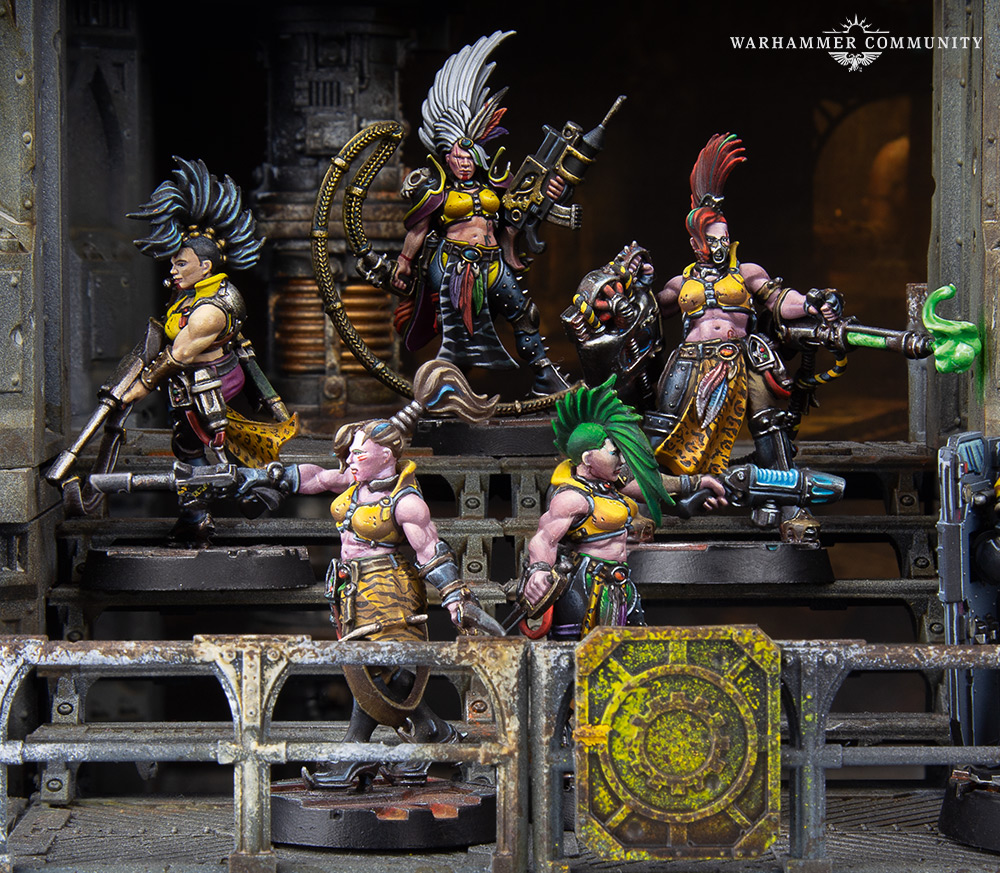 I’m also not convinced by that almost-purple skin tone they use for the models, although given the lore of chem-cults and so forth, I suppose it might fit with the notion of some gangers being almost drug-addicts. I’m going to stick with my more “normal” skintones, anyway, and see how far I get.

So there we have it – my starting gang, nine models strong, with some fairly interesting things going on (hopefully!) I still need to think about skills for the champions and leader, but I’m currently dying from a cold (it’s not COVID, honest!) so I don’t really have the wherewithal to make those sorts of decisions yet! I’m hoping that I’ll be able to have some more hobby time before I go back to work in two weeks, and maybe I’ll have some completed gangers to show for it!