Hey everybody,
Today is the day of the long-awaited fourth new army update! While this has pretty much been covered in both my April and May retrospective blogs, I thought I’d keep the tradition going and provide a proper update for the force, mainly so that I can share some fancy pictures!

Since the last update, I’ve painted up the three Endless Spells for the Ossiarch Bonereapers, as well as some more hero models. Vokmortian and the Mortisan Soulreaper are both wizards, something my army was otherwise lacking (considering I’d painted up the spells with only the Mortisan Boneshaper to cast them all).

I really enjoy the Vokmortian mini. He was the original Bonereapers character, of course, coming out in Feast of Bones back in the day, and under the current rules, he has that spell that can outright kill a model. His miniature design is also pretty bonkers, a skeleton clerk holding out a contract and wearing a tombstone strapped to his back. I mean, what’s not to love?! I can probably make him look a lot better, particularly in terms of his staff, but I think I principally wanted to concentrate on getting the model finished.

That’s been a theme across pretty much the whole army, though, I suppose – having a colour scheme that is quick to replicate across all the models, to get them tabletop ready, and then I can come back in as time allows to properly finish off odd details when necessary.

The Mortisan Soulreaper was an interesting model to paint, because of the ghostly stuff going on around that massive scythe he’s got. Again, there’s really nothing new on this model that I haven’t painted before, the ghostly bits being similar to the hafts of the Immortis Guard weapons. I’m quite pleased about the way I’ve been able to get the screaming ghost blending in with the scythe blade.

The main boy in this procession of heroes is Arch-Kavalos Zandtos, who is a named character for the Mortis Praetorians that I’ve painted in the colour scheme of the Petrifex Elite. But I suppose my use for him is as a Liege-Kavalos. I built this model up in its entirety to start with, which didn’t feel like it would be a problem until it came to painting and discovered that it was more difficult than I’d anticipated! The shield is connected to the arm and harness, meaning it can’t really be left off to paint, so led to some issues, but I think I managed to pull it back and get him looking reasonably fancy! I decided to paint the weapon as metallic rather than the usual scheme I’ve been using for the nadirite weaponry, but on reflection I’m thinking I might change it – it’s called the Dark Lance, after all!

I’m trying not to get too much into the rules now that AOS 3 is on the horizon, but Zandtos has some very nice abilities, allowing for re-rolls of wound rolls and the like, plus dishing our mortal wounds to nearby enemies when he finishes a charge, as well as a command ability that adds 1 to the attacks of a unit within 12”. The Liege-Kavalos has these last two abilities as well, and clocks in at 20 points cheaper. What’s 20 points, I hear you cry? Well, it’s the difference between a stock named character and a generic character that you can give additional relics and command abilities to, allowing you to tailor your approach. 20 points is also the cost of the Soulstealer Carrion, the massive bird endless spell.

So this is where I’m up to, anyway! 1380 points (if I’m taking the mounted hero as Arch-Kavalos Zandtos), and I’m very pleased with my efforts to date!

I still have a few models to get moving on, specifically those Kavalos Deathriders, as I’d like to get a mounted contingent started for the army, and give Zandtos some friends! The catapult is an absolutely stunning model, as I’ve said previously, but I’m still a bit wary of it for the time being! One of my principal concerns is that I don’t actually have a proper storage solution for the army sorted yet – so they’re all pretty much stood up in a storage box, which is already full!

Longer term, I’m going to get myself another 20 Mortek Guard, and bulk out both of the squads that I’ve already got going on. Of course, with everything about to be going on in my life, I’m not in any rush, so can probably afford to wait and see if we do get a Start Collecting box when the new battletome comes out!

It’s probably incumbent upon me to mention the faction focus that came out the other day, looking at how Ossiarch Bonereapers are going to play in the new edition. I have to admit, I didn’t really take anything away from it as I’ve not been following the news with gusto, so aside from the fact Nagash is a powerhouse of Arcane Bolts now, the biggest thing for me was the fact that the Gothizzar Harvester counts as more than one model for holding objectives, because it’s a monster. Excellent! 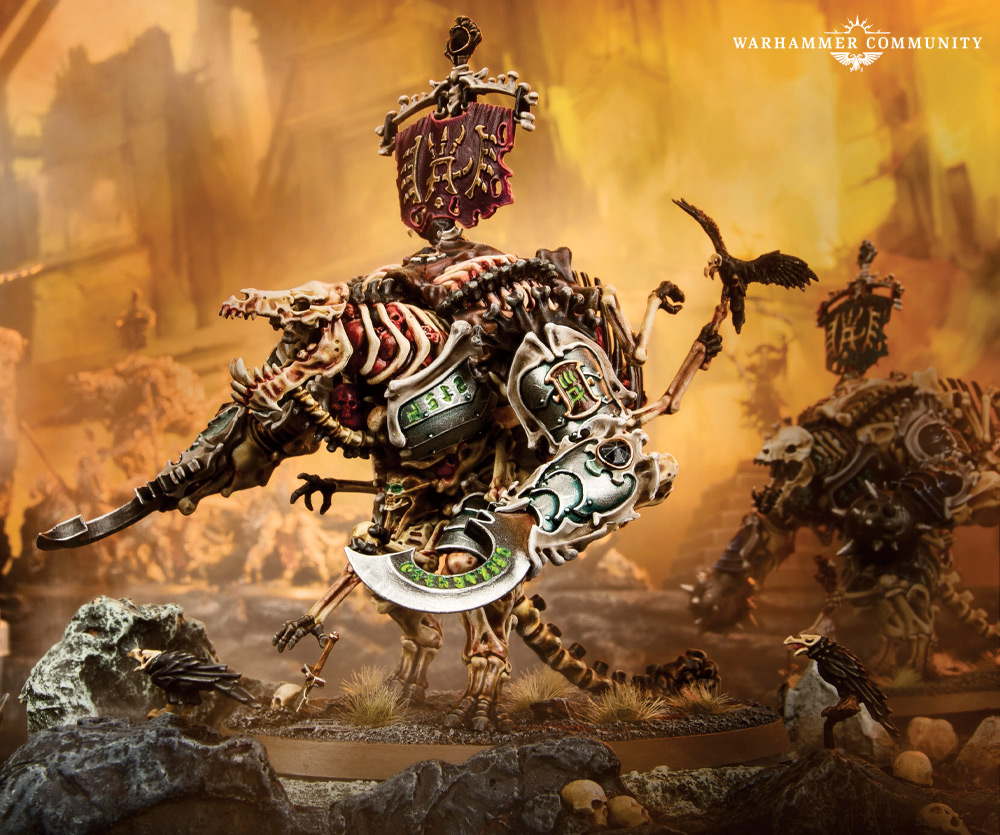 The facebook group seemed to be going crazy about how the Bonereapers are now nerfed into the ground, though, because of the way command abilities work. The army still collects Relentless Discipline points, which are used for using command abilities as normal. I hear things about not being able to use more than one command ability per phase though, but I don’t know if (a) RD points work around that, as we don’t appear to have seen the whole rule yet, or (b) if I’d even find myself trying to use multiple command abilities per phase? It has been on my mind to properly sit down and work out the kind of battle plan I’d like to affect, but now that the game is in flux I don’t really see the need anymore!

Things do seem a little bit up in the air at the moment, but hopefully when the time comes for me to look again at this army, we’ll have a new book and know more about any potential new units coming out – Mortek Archers, I want you!