Hey everybody!
It’s been a while since I’ve talked about cardboard crack on this blog, but following on from my discovery of some cards in the attic, which I mentioned very briefly in my May update, I thought I’d do a little bit of investigation into what I’ve missed in the few years since I last cracked a pack. What else am I going to do with my paternity leave, right?! 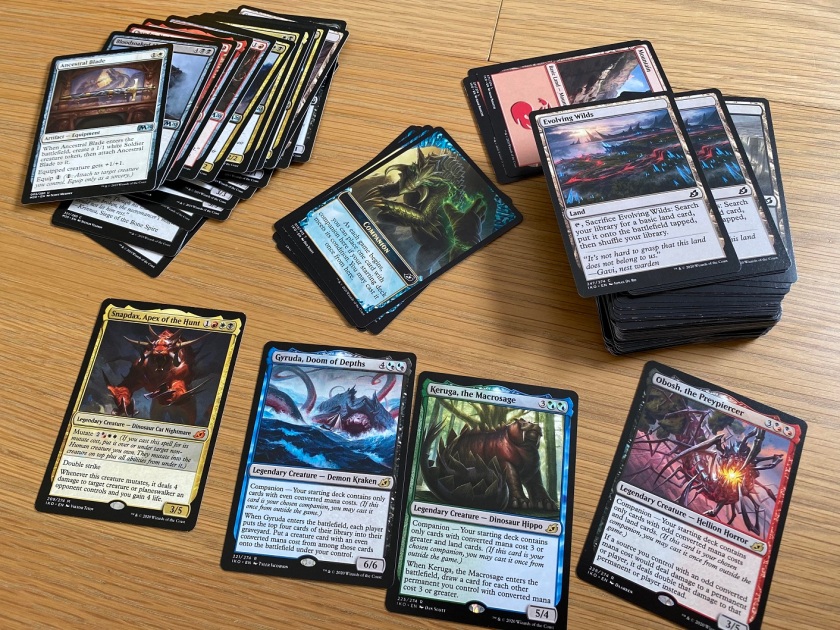 So let’s just remember that the last set that I was anything like present for was War of the Spark, which released in May 2019. Oh wow, so since I last shuffled up a deck of cards, I’ve had two children… wow! Since that time, I count six full sets have been released, the most recent of which is Strixhaven. But I’ll get to that later.

2019 saw a new core set, M20, the second of the new core sets to be released since they had been abandoned after Magic Origins back in the day. The core set was roughly based around Chandra Nalaar, although there doesn’t seem to have been much in the way of actual story for the set. Fair enough – it’s a core set, after all. Gimme the reprints I need!

After M20, the next set was Throne of Eldraine, which I do remember coming out as being something of a fairy tale set. Apparently it’s a top-down design based on Grimm’s tales and Arthurian legend. Sounds interesting! The storyline seems to be based around a conflict between the Knights and the Wild Peoples, with Garruk turning up to kidnap the resident king, but his kids manage to rescue him and ignite their sparks. The kids are Will and Rowan Kenrith, who I seem to recall came as partners in the Battlebond set.

There is a new card type in the set, called Adventures, which are spells stuck onto creatures. The video above shows how they work, but honestly, I just don’t get it. It’s not really like there’s a link between the two aspects on the card – the Adventure portion doesn’t seem to make the creature you can cast any bigger or anything, it’s like they had too many cards they wanted to fit in, so stuck 30 of them onto creatures and made up this weird thing.

Otherwise, Eldraine seems like an interesting enough set, and maybe I’ll look into that some more at a later date…

2019 also saw something called Secret Lair, which appears to be a very expensive booster game where you can get older cards reprinted. I’ve heard some pretty negative stuff about this whole thing, though, so suffice it to say I won’t be looking into these things.

Moving into 2020 now, the first set of the year was Theros: Beyond Death. A return to Theros, how delightful! The set is mainly focused on the Underworld of the plane, however, which the above trailer seems to show really well. Elspeth isn’t dead, or maybe she is but she’s beyond death now (eh? eh!) and we’ve also got Ashiok running around, one of my all-time favourite pieces of creepy-weird art from the game. There’s also a new Theros god, Klothys the god of destiny (in red/green, weird). We’ve got mono-coloured gods, the original five returning, plus five demigods, who I’m pretty sure we’ve seen previously as dual-coloured creatures. These demigod cards are more like their prequel versions? I don’t know.

The big news, to me, is that the set uses Sagas once more, the legendary enchantment type introduced back in Dominaria. Nice!

Despite COVID breaking out, we still had set releases almost as normal. Ikoria, Lair of Behemoths was next up, and is a set that I’ve previously mentioned as sounding interesting to me. It features the Tarkir wedges once more, and we have some pretty crazy-huge creatures (well, it is the land of behemoths!) The set is one of those for which I’d picked up some cards somehow without really realising! So I think I need to get in on this and see what it was all about!

This set is all about massive monsters, with a vaguely kaiju air to it. Narset is back as a planeswalker, by the way, in her original Jeskai colours as opposed to the blue/white of her last Tarkir incarnation. One of the big themes of the set is Mutate, a kind of “build your own monster”. Cards with this keyword can be cast for their Mutate cost, where they are attached to a non-Human creature, either above or below that target, and the two (or more!) creatures become one – that is, they’re considered to be the creature on top (for CMC and power/toughness) but with the abilities of all the other creatures below it. Interestingly, if the creature is flickered, then it comes back to the battlefield as individual cards.

There’s also the neat little keyword Companion, which is featured on some cards and instructs a deckbuilding limitation (such as all cards need to be a certain CMC or something), but allows you to include that card in your sideboard and then cast it – almost like a mini version of Commander. Originally, there were no particular rules around this, but later it was revised to cost 3 generic mana to cast your chosen Companion.

Having at least some of these cards has made me excited to start thinking about building decks with something of an Ikoria theme, so we’ll have to see if parenting duties will allow for that to happen!

We got the summer core set, M21, as well as a supplemental product called Jumpstart. This has been fascinating me since I’ve now taken the time to actually look into it and see what I’ve been missing. A massive set of over 500 cards, most of which are either reprints from the history of the game, or else ported over from M21, with just shy of 80 actual new cards. It’s not just new cards, but a new way to play – the boosters have 20 cards in them, and the idea is that you buy two, shuffle them together, and you play! The packs all have basic lands in them, but it’s kind of a case of just throwing together two random packs and hoping for the best, as there’s no way to plan a deck because of the random nature. It’s really quite fascinating, I have to say!

A MTG version of Smash Up? Interesting. It’s been a while, obviously, since I’ve seen a video with the Professor, but I feel as though any MTG product that he speaks well of must actually be worth looking into!

This blog seems to be running long, so I’m going to close up for now. I’m going to continue to catch myself up with the game that I’ve missed later this week, so stay tuned for more!

2 thoughts on “A little night Magic… (part one)”