Hey everybody,
I recently got to play my very first game of Necromunda, for real, and it was awesome! It was my Delaque vs James’ Orlocks, and it was an absolute blast! We did have to take our time going through the rules, and trying to make sure we were playing properly etc. But the game was really good, I have to say. 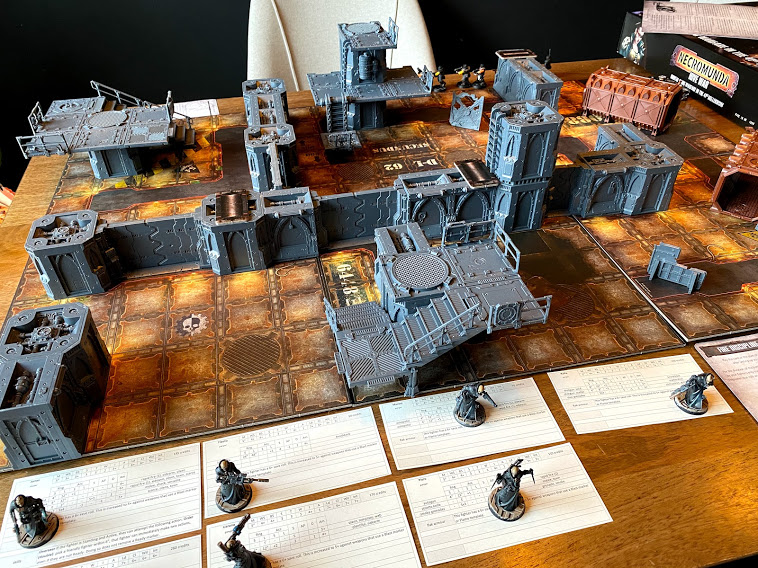 I’ve previously played twice against myself, of course, so had a vague understanding of how the game plays etc, but it’s no substitute for coming up against a real opponent. Both games were against Van Saar, as well, so getting to play against Orlocks was good for the variety, too. The game was a basic brawl, with no other objective than to wipe each other out. While I did manage to draw first blood with a simple vaporising one gang member with my champion’s grav gun, I was ultimately defeated when my last guy was seen off.

Interestingly, both our gangs didn’t really draw in to close combat. Delaque weaponry is almost at its best in the mid-to-short range, it seems, and so I was getting perhaps closer than I would normally like, but I was still holding back from properly getting stuck into melee. The Orlock gang was built with the full suite of new rules from House of Iron, whereas my Delaque are still awaiting their update from House of Shadows later in the year, but even so, I didn’t feel like I was particularly outclassed as a result.

Things are a bit on-hold for the time being, as I plunge once more into child-rearing with the secondborn, but once we can be reliably sure that both kids are sleeping through the night, I’m hoping that James and I can make a start on a campaign! We’ve not really made much headway into deciding any particulars of course, but I have so much stuff for this game that I doubt we’ll actually be at a loss.

I’ve decided that I need to pick up some more gangers, so have bought the FW heads to try and get some variety in there. I already have one of the weapon packs, but I’m actually thinking that I could do with more basic-weapon guys in my group! I think the Delaque in particular were a bit of a victim of my over-zealous building with the fancy stuff back in the day, so that when I came to create the gang properly, I found that I couldn’t actually use all 10 in a starting force. So I’m thinking more shotguns and more pistols. Basic stuff, so more bodies from the off.

In terms of the actual ganger bodies themselves, though, I’m going to get the new Hive War box, mainly because it’s only marginally more expensive than buying a gang box and the scenery separate, and for the extra £10 I’d get ten more Escher and the extra gubbins that I could potentially sell off regardless. So that’ll be something to take a look at some time soon. I’ve already got another box of the platforms and stairs, but have held off from putting any of it together because I don’t really know what I want to do with it. I think having the extra columns and walls from the new box will give me even more scope with the terrain that came in Dark Uprising, and so I think I should be able to get some interesting terrain set ups in the future! I’d been playing around with a few configurations prior to the game, and have taken the plunge with gluing some more platforms together, creating a nice bit of modular centrepiece stuff – now, of course, I just need to paint it all! I definitely need something simple, because I’m already looking at a hell of a lot of plastic that needs covering, and have seen a few different schemes now that look interesting enough, so it’s only a matter of time!

Having painted up all 10 of the Delaque to a reasonable standard, though, I’m now turning my attention once more to Van Saar. I do have House of Artifice, of course, and have been quite keenly reading through it of late, to see what these books actually have to offer. It’s a bit like a compulsion for me, to buy the new Necromunda stuff when it’s released, but then not get round to reading it – though I suppose it’s only recently that I’ve been assured of actually using this stuff in games.

I’m actually really impressed with the amount of stuff that is in these books, between the lore and the new rules. I’ve barely scratched the surface for the moment, of course, but I’ll have plenty of time, between feeds, with which to get to grips with it all. Something that I’ve been really excited about is the Alliances stuff, where each House has a set of three other groups with which they have a Strong Alliance. Basically free fighters for the gang, these things are very interesting, and I’m excited at the prospect that we might be getting miniatures for them all when Forge World gets back up and running. I’m half sure that I remember something from one of the Open Days where they showed off artwork for possible upcoming models, or something? We’ll see, I guess, when the world returns to normal.

So far, each gang book has given options for an alliance with a Guild, a Recidivist (criminal) group, and a Noble House. Van Saar has a strong alliance with the Promethium Guild, Imperial Imposters, and House Catullus, and can choose to form an alliance with one of these groups during a campaign. The benefits are free fighters and perhaps other benefits like bonus credits after a scenario, or access to exotic weaponry and upgrades. However, you might get bonus credits, but sometimes the alliance you’re in might result in there being a negative effect, like the noble house taking a huge cut of your profits. It’s really intriguing me, and I’m finding myself hopeful for seeing some new models for these things in due course! The Slave Guild has already come out for Goliath in House of Chains, and I believe the Water Guild is due at some point for House of Blades, so I’m cautiously optimistic. These groups seem to only be two-to-four models, though the Slave Guild is about £40 to pick up. The recent weapons for Goliath and Escher in plastic, though, make me wonder whether the future of Necromunda might well lie in more plastic… 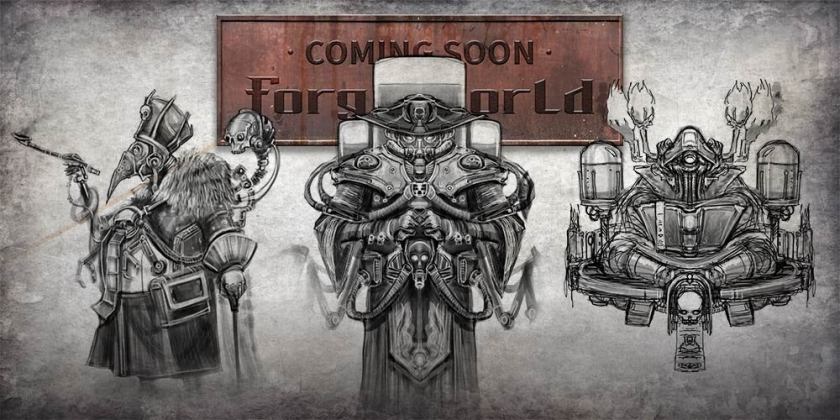 At any rate, Necromunda is a game that has me incredibly excited right now! We’re a few more months away from House of Shadows, at which point we’ll be once more staring over the precipice of what can be coming next. A lot of people on the internets seem to be expect Spyrers at some point, which is one of these storied names about which I know nothing! I’d like to think we could potentially have models for these Noble Houses / Guilds / Recidivists. The depth of this game, though, means that we could be seeing quite literally anything coming out, and it will no doubt be utterly glorious!

2 thoughts on “So much Necromunda!”