Hey everybody,
Welcome back to the second part of my Codex deep-dive into the Sisters of Battle, this time looking across the wider suite of rules n the book and seeing what I can make with the models that I have.

Last time, I was looking at the army-wide rules and how they all fit in with what the army is trying to accomplish. Now, I’ve started to re-work my list ideas into something that I will have to aim for, without trying to get too far ahead of myself, of course! There’s always the danger of running away with myself when doing this sort of thing – building a load of models up, and then feeling overwhelmed by it all! I’ve moved away from the initial list that I had made,

I’m aiming for 1500 points, though I don’t want to worry just yet about how I will fill all of this. I mean, I’m pretty sure that I’ll be getting more troops, of course, and with the new releases on their way I want to keep my options open for what new stuff I’ll be sprinkling in.

I’m playing Order of the Sacred Rose, as I’ve said before. The rules for this Order Conviction are:
– no more than one model can flee when a Morale test is failed;
– regain one Miracle die on a 5+ after performing an Act of Faith;
– Overwatch attacks hit on a 5 or 6.

In addition to the usual relics and warlord traits on offer, there is a stratagem for the Order that allows for hit rolls of 6 during Overwatch to score 1 additional hit. Wonderful stuff!

Let’s start at the top, anyway, with the Canoness. The warlord trait that I have chosen is Light of the Emperor, the Sacred Rose specific trait that allows for the warlord to gain one Miracle die after performing an Act of Faith, with no roll needed. The relic she has merely improves the damage output of the blessed blade from D3 to a flat 3. I’m not really sure how to use the model yet though, as I’m always a bit wary of throwing my warlord into the thick of things, but there are a number of stratagems that can protect characters – and even bring them back from the dead, if need be!

I’m intending to run the Canoness around with her bodyguard unit of Celestians, anyway. The squad has a slightly better stat line than the basic Sisters squad, though both units can equip one heavy weapon and one special weapon, or two special weapons. They have a better WS, and more attacks, which could be seen as making the case for equipping the Celestian Superior with a fancier weapon, but the chainsword is always a solid option for granting one additional attack! I’m going for a general theme of having my Sisters preferring melta weaponry, so the squad has a meltagun and an inferno pistol in there. However, there is also the heavy flamer, and three bolt guns, meaning that it is a viable target for the Holy Trinity stratagem, which gives +1 to wound if flamer, melta and bolt weaponry all fire at the same target. In addition, Celestians can re-roll hit rolls while within 6″ of a character model, so I think it’ll be good to keep them close to the Canoness! 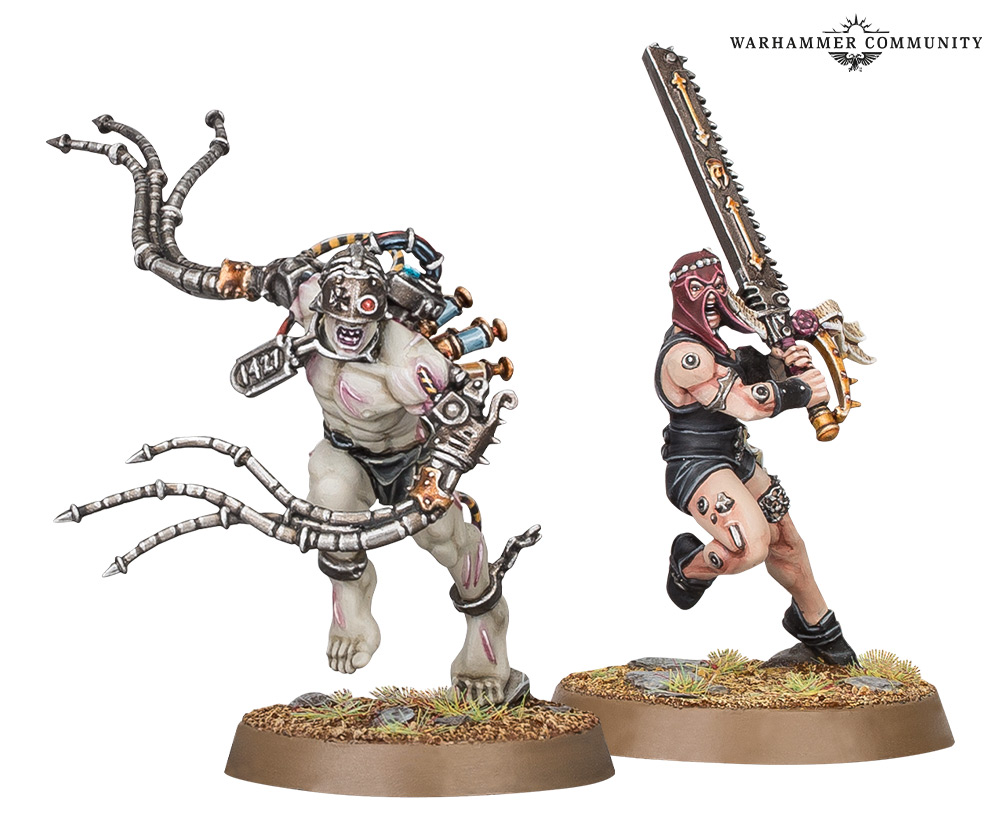 Let’s talk about close combat now. I said before that I’m planning to have the core of the army reflective of the launch box for the new army, so I’ve worked in the squad of Sisters Repentia with the Repentia Superior to chivvy them along. The elite slot is really heavy in a Sisters army, though the Repentia Superior doesn’t count in it while she comes alongside a group of penitents. However, when I start wanting to expand into the Dialogus et al, I think I’m going to need a new detachment!

The Repentia can re-roll wound rolls of 1 when within 6″ of the Superior. They also have the Zealot rule, which allows them to re-roll hit rolls if they charged or were charged that phase. So there are definitely options to improve their accuracy. 8 attacks in the squad, at S6 AP-3 and 2 damage each, togged up with these re-rolls, should be quite nice! The Repentia also have their own stratagem, Final Redemption – when the unit is being attacked, each time a model is destroyed, you get to inflict a mortal wound on the attacking unit on a 4+. There is also the option, for 3CP, to get the unit to fight again at the end of the fight phase, which may also be useful!

The arco-flagellants are one of the ecclesiarchy battle conclave units that are allowed in the army. They also have the Zealot rule, and have a unique stratagem, Extremis Trigger Word. This one is interesting, because the regular group of three – two flagellants and an endurant – has a base 7 attacks. However, for each attack, you make D3 hit rolls, and the stratagem makes that a flat 3. So 7 attacks, making three hit rolls each – 21 dice, at S5 AP-1 and 1 damage each… oh yes! The only downside to this is that you must then roll a D6 for each model, and on a 6, they die. 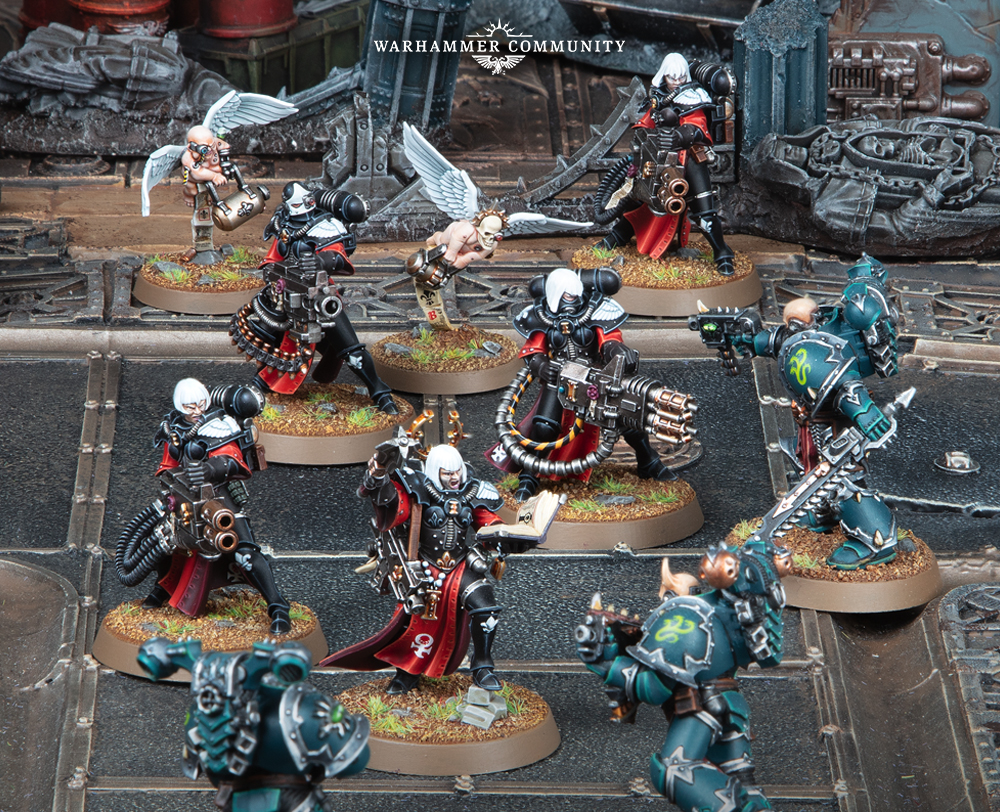 The group of Retributors that I’ve recently put together is made up of a pair each of multi-meltas and heavy bolters, with the Retributor Superior has a combi-plasma and power maul. I’m still not a big fan of the Superior’s pose, it looks incredibly awkward somehow, but anyway. Retributor Squads also have a unique stratagem, which costs 2CP and allows you to choose an effect depending on the weapon load out – +1 to hit for a heavy bolter OR re-roll the wound roll for a heavy flamer OR +12″ to the range of all multi-meltas and +1 damage for a multi-melta. Having a pair of multi-meltas, I think I’ll probably be using it for them, as the range increase will mean the melta effect will kick in within 18″, but will still give them the same range of the heavy bolters.

I’ve got the Penitent Engine in here for some added threat – it’s not a particularly big model, if I’m honest, though it’s bigger than anything else in this line-up, armed with a pair of heavy flamers and capable of 5 S8 attacks at AP-3. Very nice, but I do worry about it getting stuck in with only being T5 at 5 wounds. There’s very little to bolster it, being an Adeptus Ministorum unit, though the same 3CP stratagem as the Repentia have does apply to the Engines as well, allowing them to fight twice. 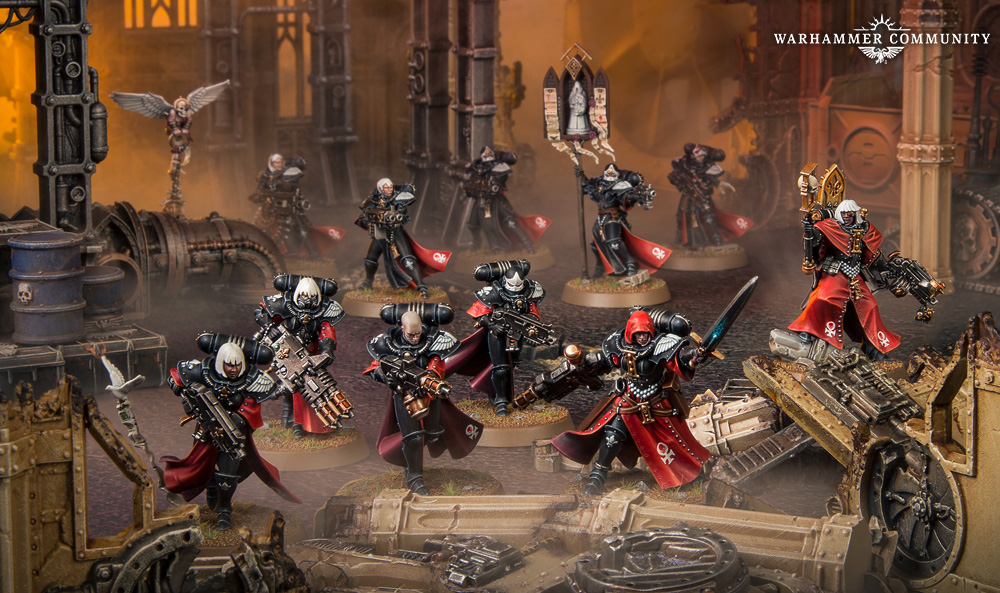 Something that I’ve been backwards and forwards on multiple times, though, is the Dominion squad. The purpose of these girls has eluded me for a while, flicking casually through the Codex, but it’s clear that their intended purpose is to move up the board as quickly as possible to maximise on positioning, and then either objective-camp with their fancy weapons, or aggressively go after a choice target. They really are a special weapon showcase, being able to take four of them per squad. On the competitive scene, the go-to load-out seems to be four storm bolters, to use the Blessed Bolts stratagem. For 1CP, you can make storm bolters AP-2 and D2 each. That’s pretty good, although I find it a bit boring to equip the squad entirely the same, you know? So I’ve added in some meltagun girls because they’re going to be moving significantly, anyway – the melta effect comes into play at 6″, but even at their maximum range of 12″, that’ll put the storm bolters into rapid fire range for some serious threat.

I would just like to point out, as well, that the Battle Sisters box, which can also be used to build Dominions and Celestians, comes with four of each special weapon, so you don’t get shafted if you’re trying to build them as Dominions. Excellent stuff, there!

Of course, as with a lot of the ranged units in the force, there are a few targets for specific stratagems that I’ve mentioned; the Sacred Rose-specific The Emperor’s Judgement allowing for exploding hits on 6s in Overwatch will be useful for a variety of units, after all. Blessed Bolts can be used by the regular Battle Sisters, one of whom has a storm bolter, etc.

I think this is going to be a good start to the army, though of course with a new Codex on the way, who knows how any of this will hold over? Yesterday, I was reading the latest Battle Sister Bulletin that began to tease new rules for the army, giving us six battle hymns that we can have a priest sing at the start of the turn. It reminded me a lot of Canticles of the Omnissiah for the Adeptus Mechanicus, though I suppose the Prayers to the Dark Gods from the Heretic Astartes might be more appropriate. These priests can provide some very nice aura effects, such as causing auto-hits on 6s for bolt weapons fired by a unit within 6″, or to shut down any psykers attempting to manifest powers at a nearby unit. Very powerful, that one, and what I find more interesting is that the Dialogus is now seemingly classed as a priest, herself – as well as the new Dogmata model. 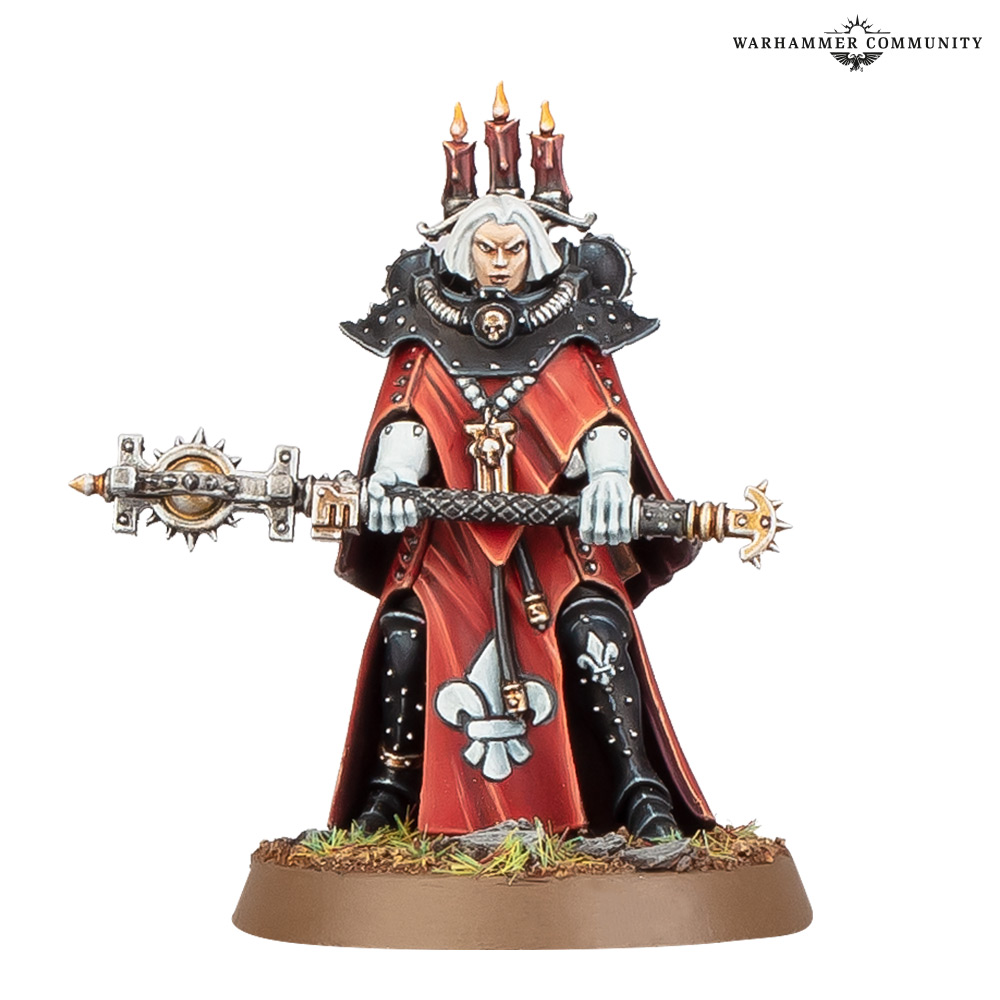 I know not everybody likes the new model, but I can certainly see a place for her with these hymns being on the horizon!

At any rate, I’ve got plenty to be getting along with here, so hopefully I can make a concerted effort to get painting these models next! We’ve got a long weekend coming up, and it’ll soon be time for my May retrospective, so keep an eye out for some progress on the Battle Sisters, soon!!

One thought on “The Adepta Sororitas”