Hey everybody,
Warhammer Fest 2021 has been and gone, and there have been some fairly mixed reviews on the internet overall, with a lot of people seemingly disappointed with the fact that the hyped 6 days of previews didn’t live up to expectations. While that is perhaps true, and the event didn’t really have the usual feel of these preview events as being ground-shaking, there’s still a lot to talk about here! So let’s get to it!

Warhammer 40,000
To start with, let’s talk 40k. Over the six days, there were two devoted specifically to 40k, the first seeing a collation of the various Adepta Sororitas previews that we’ve had over the past few weeks and months, plus a few extras of course. Looks like the warsuit thing is coming in a squad of three, and there will be the new Celestian squad with the maces and shields.

The weird thing about all of this is, we’re getting a High Lord of Terra! Weird, right? Well, I guess anything is possible.

It’s always exciting when an army gets new stuff though, isn’t it? So however weird these things are, let’s just enjoy the fact that the Sisters range didn’t just get a plastic overhaul back in 2019; they’re now being fully developed as a faction.

Sisters will be getting their Codex soon, and the next chapter in War Zone Charadon is on its way, and will come with rules for Be’lakor in the 41st millennium, which is pretty exciting, and it’ll be coming out alongside a terrain expansion that seems to have all of the Sector Mechanicus stuff that has been hard to find for quite some time now! 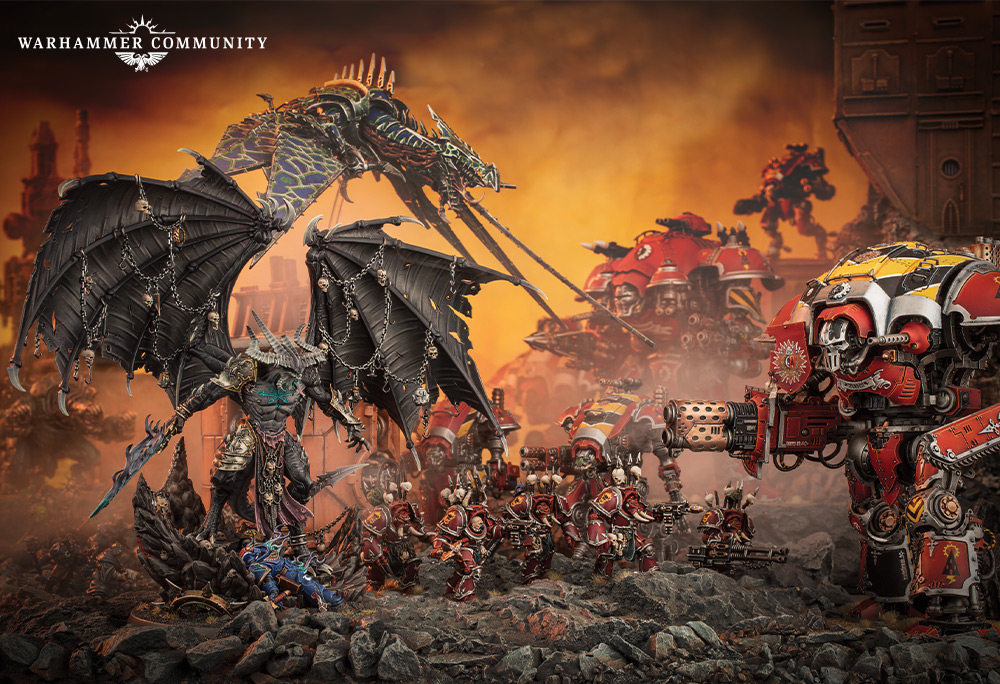 The second day for 40k reveals came on day five, and we’ve got more Orks coming, those squig-riding things and a couple of new characters.

In addition, there is going to be a reboxing of Cadian Shock Troopers to give them more diversity, more faces and the like.

Not a new kit, though, which everybody has been clamouring for for years. Ah well! But we have also seen this little teaser:

I must admit, I’ve been turning away from the light of the Emperor of late, and preparing to embrace the fact that I’m a xenos player through and through. However, now that we’re seeing some Grey Knights on the horizon, however distant that may be, I’m thinking I need to wait and see what’s coming before I do anything too hasty!

That wasn’t all for the 41st millennium though, as day three brought us a bit of a surprise (for me, at least!) – Gaunt’s Ghosts are getting new miniatures!

I did not expect this! There are another raft of novels on the way, including two more Warhammer Crime anthologies! I’m a little disappointed to find out that they’re anthologies – although one apparently had a novella in there – but it’s still very good to have more of this stuff! Grim Repast, “a Quillon Drask novel”, sounds like it should be good though. I just hope that we see Black Library make good on these books that are sold as “a (character) novel” and give us more of that same character in future books.

Boxed Games
Day four was all about boxed games, and we saw some upcoming stuff for Direchasm, Necromunda and Aeronautica Imperialis. The latter doesn’t really interest me, though I do think it’s kinda funny that it’s being marketed as the plastic thunderhawk that people have been asking for for years.

Necromunda previews consist of the House of Shadows, and the Delaque specialists. I am very excited about this particular release, as they really have become my preferred gang! The new models are just as weird as I’d hoped they’d be, with a couple of gribblies such as that weird flying brain thing. Definitely the sort of thing that I’d expected from Delaque!

For Direchasm, we’re getting the Idoneth Deepkin warband, though everyone has been going crazy for the crab mini!

Which brings us nicely on to…

Age of Sigmar
I’ve saved this until last because it was probably the biggest part of the week of previews – outside of the crab, of course. Day One saw the remaining previews of the Soulblight Gravelords miniatures, which look truly like the stuff of nightmares:

These models tie in quite strongly with Warhammer Quest: Cursed City, which is quite sad because that game has disappeared entirely in a whimper that wholly belies the ceremony and hype that had been lavished upon it prior to release! A lot of people – myself included – had hoped there would be some kind of official word on this game coming from one of the days, but despite hundreds of comments in the twitch chat asking about it, no mention has been made whatsoever. Shame.

The fourth Mortal Realms book has also been announced: Kragnos is a huge Beastman-type, and the book will be coming with all those cool new models that have been shown off, such as the flying Slaaneshi thing, the new Lord Kroak and more. Mortal Realms then draws a line underneath Age of Sigmar 2nd edition, as the Sixth and Final Day of previews has given us the big news (that so many people had already guessed) – third edition is on its way!

This model is just wonderful, and I won’t lie, it’s got me pondering starting a Stormcast army!

She’s a new type of Lord-Celestant, or something – I didn’t really watch the stream, although I caught bits of this one as I was putting my daughter to bed. The interesting thing, for me, is that the lore has the armies of Order finally reclaiming the lands lost to Chaos and creating outpost cities. I find this fascinating because it feels like we may actually be seeing something akin to the Old World, and the network of cities and whatnot. Of course, there’s still the potential for them to all have daft names, but even so!

The article makes mention of a new narrative play style, which I guess is Crusade from 40k by another name, so we can expect to get updated battletomes for all factions to include those new rules. So long as the Ossiarch Bonereapers get their Mortek Archers and the mace-wielding guys, I’ll be happy!

And that was it! Big news was Age of Sigmar v3, and we have supplemental ranges of Sisters and Orks to look forward to. I think everything else was decidedly of a lower rung of colossal really, though I’m trying not to follow the rest of the internet with complaining too much. New stuff is nice, for sure, but I think this time around, it was definitely over-hyped, and with having everything spread over six days, it meant that individually each live stream was a little disappointing. But we’ve got the promise of more previews to come in May, which may bring us further news of what’s coming – hopefully they won’t be quite so universally decried…