Hey everybody,
Almost a year to the day after taking a look at the first six Galaxy Guides for the original Star Wars RPG from West End Games, I’m back to take a look at books 7 to 12, as I get all warm and nostalgic for Star Wars in the olden days!

Galaxy Guide 7 is all about Mos Eisley, and brings together a variety of bits and pieces from the guide covering episode IV, plus Tatooine Manhunt, then builds upon it. We have profiles for all the personnel we could ever hope to encounter, from the Imperial Governor right on down to a lowly Squib droid dealer named Mace Windu. Yep, back before the prequels this was just another name running around in the background of the lore. Funny, huh?

The eighth book is all about Scouts, and is somewhat renowned for being the first of the WEG books to take things firmly into the New Republic era. It has a lot that deals with expanding the frontier, with stuff like planet generators that allow GMs to go crazy with creating their own area of SW lore. Book 9, Fragments from the Rim, is such a curious beast, I don’t know where to begin! It’s almost like a compilation of odds and ends that we’re trimmed out from other books – chapters cover everything from Rebel SpecOps to leisure activities and music in the GFFA, and take in both the Empire and swoop gangs, big business and the criminal underworld along the way. It’s so bizarre, I just love it! I feel like this one, more than anything, is truly indicative of how much of a sandbox the WEG system could be for the RPG. Truly amazing.

Guide 10 is all about Bounty Hunters, and would have been the essential book for players who want to use a bounty hunter character in the game. We get some background on what hunting is all about, specifically how it is regulated in the Empire, and run through character creation and profiles of notable hunters, including of course all six hunters who answered Vader’s call in Empire. The book is a fascinating exploration of bounty hunting, giving loads of in-depth information on everything from weapons and other tools, to the various Guilds and such. It concludes with an adventure specifically designed for three bounty hunter characters. All in all, it does exactly as you’d expect, and I imagine you’d find this book indispensable if that was the career path for your character. 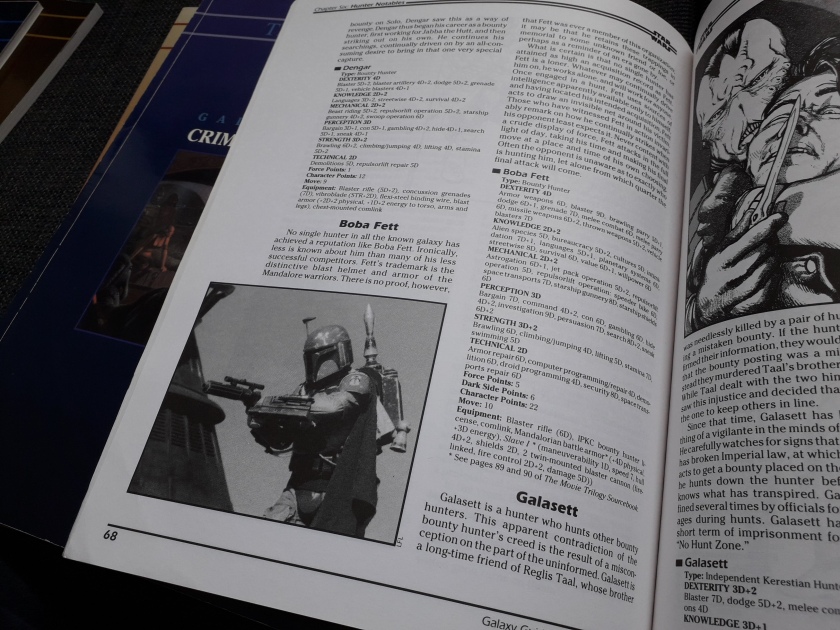 The eleventh book is devoted to Criminal Organisations, and we have a good look into the black market, the galactic fringe, and the Hutts. Again, it’s a great source book, though mainly I guess this one is for the GM, as it involves a lot of the sort of background material that I would appreciate having to hand, to make my campaigns more interesting. The twelfth and final Galaxy Guide is another compendium of alien races, with stats for all manner of stuff, mainly the Jabba’s Palace chaps that we’ve not seen before, but also several created for the RPG.

All in all, these Guides are tremendous for the amount of content that they pack in. The quality of this stuff is really top-notch, as well, going to the nth degree with what may be required for the game. Getting the storied history of so many criminal organisations and such is really great, even if I think you’d be really hard-pressed to use it all, even in multiple campaigns!

I think the type of stuff we get in these books speaks volumes as to what Star Wars was back in the 1990s. So much of this, and the other WEG books, covered material out on the galactic rim, without really venturing much into the conflict in the Core worlds. We have criminals out on the fringe, and rebels really acting on the sidelines. Which is really what the original trilogy was about, when you think about it. Cloud City was about as sophisticated as those movies got. Subsequent game systems blew the galaxy wide open, and with the help of the prequels, Star Wars became something a bit more refined. But it’s always so much fun to go back to these game books, and relive what Star Wars used to be.

Hope you’ve all enjoyed this jaunt down memory lane with me! There will be more WEG blogs in the future, because I have them all, so don’t think I’m done with these sorts of reminiscences!