Hey everybody!
I’m really enjoying these end-of-the-month round-ups that I’ve been putting out so far, hopefully they’ve been interesting to read, too!

I want to start off with talking about WandaVision, which I have finished and which I enjoyed immensely! From such a weird start, the show progressed incredibly well, with such a wonderful pacing as the mystery unfolds. In particular, I love the fact that we get so many quiet moments in this show, which is fundamentally about family life (albeit the ideal family life that Wanda wants). These kind of glimpses into character are of the sort that we’d never see on the big screen. Marvel have stated that the TV shows that they have on the books are intended to cover those characters who will very likely never get their own film; however, given the incredibe storytelling we’ve seen here, it makes me wonder if that will hold true, or whether they’ll instead branch out into further shows that explore the bigger movie characters in time.

It was a really great show, with an explosive finale that I for one really appreciated for actually staying true to the hints and suggestions of what exactly West View was all about. I think almost from the start it’s been fairly clear that this has all been Wanda’s creation, borne of her despair from losing Vision during the events of the Infinity War.

I do like the fact that we finally get to see Wanda embracing her comic book heritage with the costume and the name Scarlet Witch bestowed. In the tradition of Marvel movies, we get a mid-credits scene that shows Wanda in her astral form learning more about her powers, which indicates great things in store for her appearance in the upcoming Doctor Strange movie. 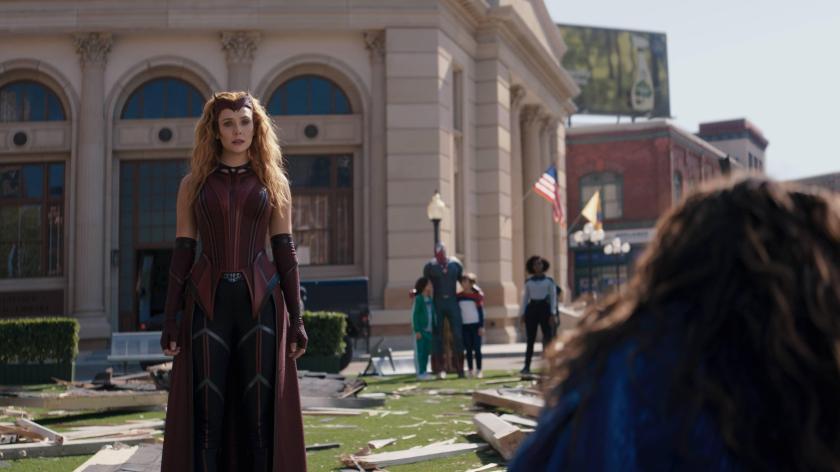 I haven’t just been stuck in front of the TV, though!

I’ve been able to play quite a few games this month, which has been incredible given the lack of much gaming so far this year! After a very false start with The Circle Undone, I have finally been able to play through the whole cycle now – and what a great run it was! You can check up my write-ups on the games here, here and here. I’ve also started on a much looser idea for a “campaign”, starting with playing Return to Night of the Zealot. My idea here is to play some of the standalone scenarios like Curse of the Rougarou and Murder at the Excelsior Hotel. Of course, I need to create a new investigator deck now, but I think it could be fun – and it’ll be nice to see what I’ve been missing all these years!

In addition to Arkham Horror LCG, I’ve played two games of Warcry! Still playing against myself, sadly, because we’re unable to meet up with friends indoors for the time being, but it’s been a decent way to get to grips with the game, and I’ve played these types of things solo before, controlling both sides of the board and making the best decisions for each, but having the one side that I wanted to actually win.

I’ve had two games with the Cypher Lords, and I do enjoy the way that they play. The first game, I was playing against them, and it was the sort of game that came right down to the wire before they were defeated by the Bloodbound, my warband of choice at that game – the Wrathmaster, with one wound remaining, rolled three critical hits to thoroughly beat the Thrallmaster into a pulp. The second game, playing as the Cypher Lords, I was completely outclassed by the Unmade and the Thrallmaster was again soundly decimated by the Blissful One attacking back to back. Absolutely incredible stuff, I have to say! I definitely need to crack on with painting the terrain for this game, though I have had a hard time deciding on a scheme.

Following on from my March Plans blog, I’ve now at least built up both the Shardspeaker and the Psychomancer – what an incredible pair of models! The Psychomancer in particular has greatly impressed me, as soon as I get some more Chaos Black spray, I’m sure I’ll be starting work on these.

I’ve been building up some more Ossiarch Bonereapers models, and have made quite a bit of progress here – I’ll be getting another army update blog posted up at some point over the Easter weekend, anyway, so stay tuned for that!

As well as the miniatures side of the hobby, I’ve also been reading more novels set in the war-torn hellscape of the far future. After putting it off for years, I’ve read Fallen Angels, which ended up a much better read than I’d been expecting. I’ve also finished the Ravenor trilogy with Ravenor Rogue, which sadly did not really live up to the rest of the trilogy! Never mind. I’m trying to get back into the Horus Heresy, after Fallen Angels – I’ve started to read the beast that is Vengeful Spirit, and I hope to move through the series a bit more this year, though I have said that a lot with these books, and only read one a year for quite some time now!

I’ve also read the second Darth Bane novel, Rule of Two, which was better than the first one, though I still don’t honestly see what so many people see in this series. The book helped me to see the whole Sith Academy thing in a different light – it was one of my major bugbears about Path of Destruction, as you may recall, the ridiculous idea of having a school for essentially evil kids, but here we have Bane draw attention to the fact that this was one of Lord Kaan’s great failures.

The book is definitely more an exploration of Zannah’s journey this time, although the middle of the book jumps ten years so we don’t have to go through years of her learning how to use the Dark Side. Instead, we have her going on missions for Bane where she is essentially working to topple the Republic by using radical groups on Serenno, the homeworld of Count Dooku. We even have a Chancellor Valorum that makes an appearance, which all just serves to heighten the links to the Prequel era as opposed to work in any real temporal distance. I’ve said it before, of course, but the book is set 1000 years before A New Hope, but it feels like it’s merely a year or two before The Phantom Menace.

At any rate, while Zannah is working to topple the Republic, Bane is trying to figure out how to make a holocron, which seems to take him the course of the book and he still doesn’t figure it out. I’m not properly up on holocron lore, but there does seem to be some conflicting accounts of how prevalent they are in the galaxy. Coupled with this, while raiding Freedon Nadd’s tomb on Dxun, Bane gets covered with weird crustaceans called orbalisks, which render him pretty impervious to any attack (we saw this in the short story Bane of the Sith, of course). However, during the climax on Tython, he is almost killed by the creatures when his Sith lightning is turned back on himself. Zannah manages to save his life, though does tell him that she will kill him when she has no further use for him.

Somewhere in there, there is a really good story. I’m just not struck on Drew Karpyshyn’s style. It feels very simplistic, and a little too much like bad fan fiction at times. Zannah is described as just gorgeous and so on, much like Githany in the last book. It all just feels a bit non-Star Wars-y. Just not really my cup of blue milk, as they say! The actual storytelling, and the temporal feel aside, I think it’s a definite step-up since the earlier book, and I am somewhat looking forward to finishing the trilogy soon.

Hobby Goals 2021 – quarter one check-in!
So we’re three months into the year now, and I think it’s a good time for a check-in as regards my 2021 hobby goals! To start with, I wanted to get the Sisters army underway, but up to this point I haven’t actually done anything with these models. At one point, I actually considered moving away from them, as it happens. However, whenever I think about them for any length of time, it’s a project that  really feel excited for, and I want to get it off the ground. I’m not sure if I should try to pare down my goals here though, and think about getting just a couple of units done. Doing this might get me into the swing of things though, and perhaps I might yet get that 500-point list painted up after all! I guess we’ll see. But Sisters definitely remain on the menu for now!

I also haven’t done anything more with my Drukhari since the Incubi back in January. I have plans for the Grotesques here, for sure, and I think I’ll take stock of the situation again once I’ve got those guys finished up!

The Codex is now out of course, though I’ve not picked it up yet… I should try harder!

Working on my Imperium forces now, I’m not sure about the Blood Angels, or the Deathwatch, but I have already thinned-out some of the AdMech models that I’d not quite gotten round to painting yet, thinking I might keep a small force of them just to have some fun with. They are just lovely models, after all. I think the Tempestus Scions might be for the chop, though – I just don’t know where I’m going with the army, and it’s been that way for so long, I think it might just be time to call it a day and focus myself elsewhere.

I still haven’t done anything with Tyranids yet, either, and the Genestealer Cults are a force similar to the Sisters in that I’ve thought maybe they could be something to move away from. Whenever I think about them, at all, I just feel the need to paint up some more Neophytes, or something. I definitely want to have a Genestealer Cult force, so I really need to plot that out.

All in all, then, it’s really not been a very productive quarter, when compared with my hobby goals! However, I’ve produced quite a lot of minis for my new Ossiarch Bonereapers army, which is quite something to be pleased about. I’ve been able to get some more Necrons done, and the Incubi as mentioned before. Things are definitely going well, I think, so it’s nothing to worry about just yet! Maybe at the halfway point there will be a bit more ticked off from here, anyway!