Hey everybody,
It’s game day here at spalanz.com, and I’m back to the mythos today as I’m talking about the cycle that I’m currently playing for Arkham Horror LCG!

So I’ve skipped over an entire cycle here, forgetting about The Forgotten Age for now and going straight to The Circle Undone! I’ve wanted to try out Diana Stanley as an investigator for some time, so even though it doesn’t feel like all that long since I played a Mystic, I wanted to see what the whole thing was about with cancelling effects and so on. Other than that, I had no real clue as to what I was letting myself in for, but to date, this has by far been one of the most enjoyable gaming experiences out there!

The deluxe expansion is where we’re at today, and things are a bit crazy off the bat. There is a prologue before we get to the main two scenarios of the game, Disappearance at the Twilight Estate. We’re at a party, and strange things are going on. There are four “prologue investigators” included in the box, who each have a hand (not a deck) constructed from the available pool of investigator cards. The object of this prologue is simply to survive – indeed, the booklet does actually start off by telling us “there is no positive resolution for this scenario”, ending with “good luck – you’ll need it”!

The prologue, I believe, has a bearing on what happens further down the line in the cycle, though I’ve read a lot of people don’t like this prologue scenario, because it forces you into playing “investigators” and so on that you don’t necessarily want to. It’s fine with me though, as it adds another layer of the narrative to things – although I wasn’t best pleased when I discovered that I needed to use cards that had already been earmarked for my investigator decks!

I played as Jerome Davids and Valentino Rivas in the prologue, and it ended up with them both being pulled into the spectral realm. Creepy mist is hanging about – it’s all beautiful! 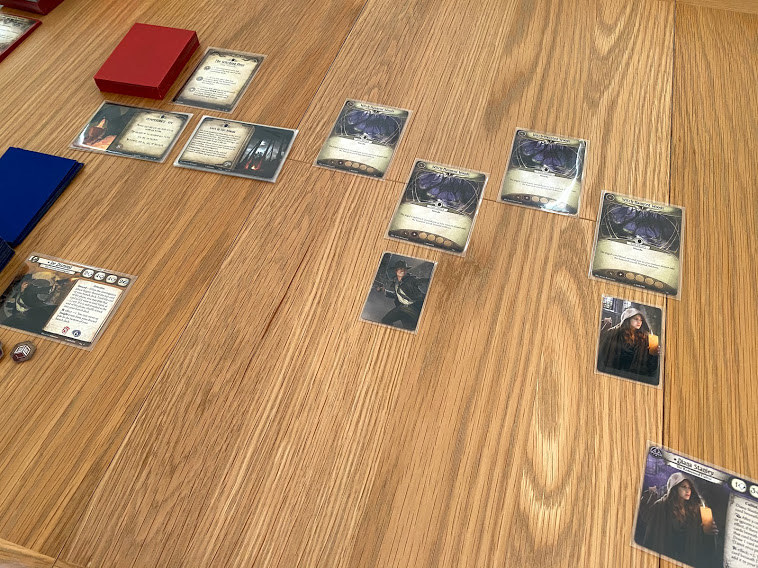 The first scenario proper is The Witching Hour, and begins with the investigators having their fortunes told on the breezy streets of Arkham. The tarot reading is a big part of this expansion, as Tarot cards are a new slot in the game that add a variety of effects, which can be quite interesting – though again, a few people I’ve seen discussing this expansion online seem to object to the addition! Anyway, the first scenario is all about witches, as a bolt of lightning streaks across the sky and we are transplanted into Arkham woods. This is an interesting scenario in that the investigators are at first separated, and can only investigate their own location – set-up instructs you to pass the locations around the table and place them in front of you, which does nothing for me playing solo, but I imagine for a 4-player game it would be quite atmospheric!

The object of this scenario is a bit like ‘defeat the big baddie’, but once again we have that pervasive sense of how futile victory can be.

The second scenario, At Death’s Doorstep, sees us returning to the Meiger estate, investigating some disappearances that have been occurring in the French Hill area of Arkham. I played this one a little while after the prologue, which is just as well I think, because it does feel very similar at first. Depending on who got pulled into the mist in the prologue, clues are placed at certain locations and those locations can flip over onto their spectral side as before. It’s all very weird, with the mist coming into the house, but we learn that the Silver Twilight has attempted to recreate the events of the earlier scenario in order to investigate what exactly happened. Creepy stuff!

This scenario is slightly weird also, because it includes an Interlude in the middle of the game. Following the conclusion of the scenario, there is a further Interlude, which serves to put the story firmly on its trajectory for the subsequent cycle. More so than Dunwich or Carcosa, I felt very much like this one was trying too hard to straightjacket us into the right way, if that makes sense. It’s not getting in the way of things, I don’t think, but it is noticeably there, and as such does seem to impact a little on the flow of things. The second Interlude feels a little bit overly mechanical like this, in that it is a single story chopped up into 9 pieces, and we skip over any of those that didn’t have an impact, which feels ever so slightly odd. I don’t know, it sounds like I’m purposefully trying to be difficult about this box, and I’m really not! It’s probably one of my favourites for the theme so far, as I’ve said! New England witchcraft, what’s not to like?!

So I’m at the end of the box, now, and have managed to gather 7VPs for my investigators from the scenarios, along with becoming an enemy of the Lodge – something I’m not entirely sure how it happened, but there we go! I have accepted my fate, escaped the spectral realm, and I’m on Valentino’s trail. In addition, the booklet has been instructing me to note down “mementos discovered” – I have no idea why, but I feel it might be interesting later on. For now, then, I’ve recovered a mesmerizing flute, and some ritual components. Hm.

It really has been fun, despite my small grievances I’ve mentioned – I think it’s one of those that appeals to me because I enjoy the regular-cultist trope over fantastical monsters, and it is really intriguing to think how these two elements – witches, and the Silver Twilight – might come together. It’s making me want to get back into reading some of the more spooky Lovecraft stories – Dreams in the Witch House and so on! It’s a really nice pace for the game, and I think the fact I didn’t enjoy the second scenario as much is probably more to do with wanting to have more witchcraft-y scenarios like the first one!

So there we have it – I’m firmly on the path now, though have been finding it difficult to get games in since Christmas has been and gone. Definitely been in more of a hobby mood of late, as shown with the army update blogs, but hopefully I’ll be able to get some more card games in soon. I still have a lot of Lord of the Rings to catch up on, as well!

6 thoughts on “The Circle Undone”