Hey everybody,
It’s time for an update on my New Year, New Army project for 2021 – yes, already! Only because I’ve been making some really good progress, so thought I’d come along and share it with you all!

I’ve been painting up the Mortek Guard, the basic foot soldiers of the Ossiarch Bonereapers, as I thought I’d try first to get the colour scheme down on the basic guys, before moving on to the more exciting stuff! I’ve gone for the colour scheme of the Petrifex Elite, after seeing them in the battletome and liking the mix of dark bone on the warriors themselves, lighter bone trim, then the more striking bright red armour and jade/turquoise cloth! 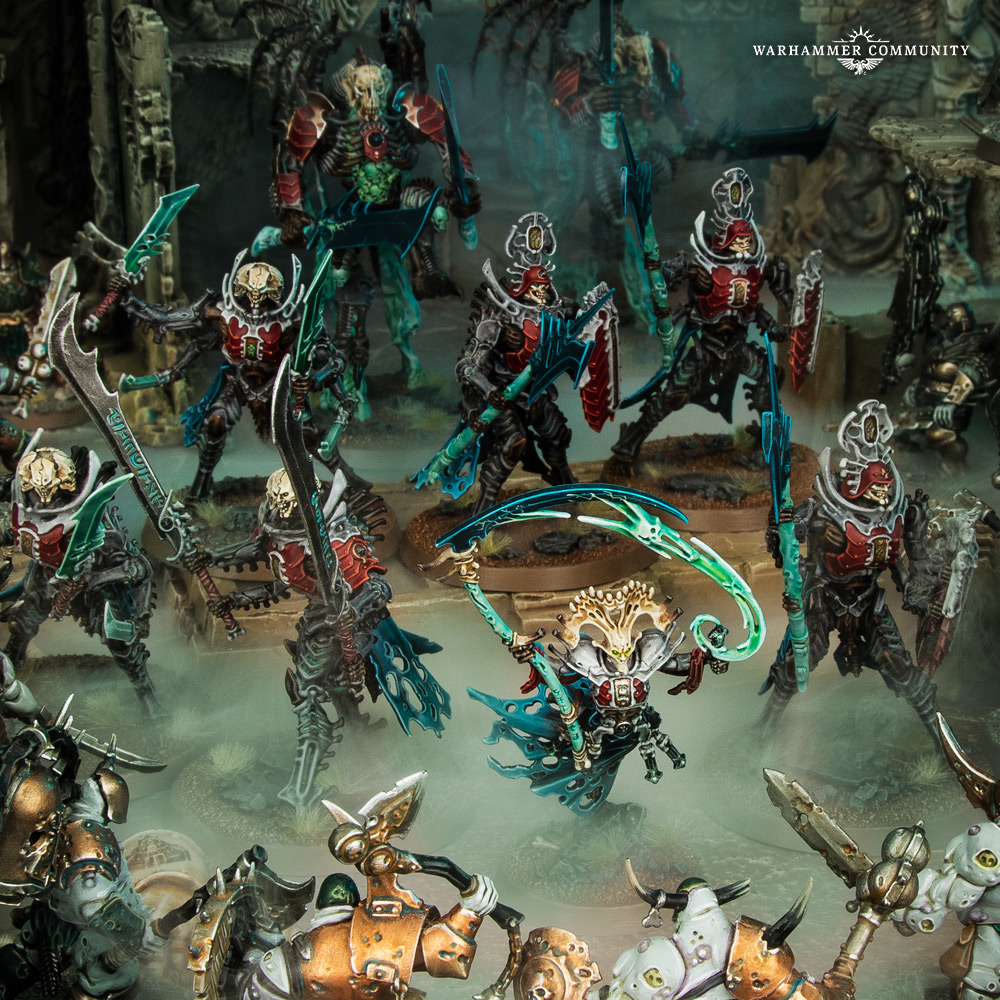 I’ve got a long way to go yet, but fortunately there are painting guides included in the Battletomes for Age of Sigmar, so I have some idea of where I need to go with it all! The scheme uses Contrast paints, which is fairly exciting for me, as I’ve not really done a great deal with them before. I must admit, I’m still not 100% sold on them even now, but I think once I start to bring it all together, it could be quite nice!

The Petrifex Elite were the original go-to choice for all the tournament lists once Ossiarch Bonereapers initially came out, due to the army-wide +1 to save. Basic troops with a 3+ save is quite powerful, after all! However, this has now been changed to a re-roll save rolls of 1, which isn’t quite as powerful, though for sure will have its uses! Of course, I’m no power gamer, so I’m fairly oblivious to the vagaries of these things! I also have nowhere near a playable army, with my partially-painted Mortek Guard bringing the grand total of 130 points to my army list!

The other Petrifex Elite abilities are nice, improving the rend of melee weapons as a command ability, and negating the first wound allocated to the relic-bearer etc. Age of Sigmar rules are not my specialism at the moment, however, so I’m going to have to go away and learn all about this stuff before I can talk sensibly about these things!

I have, however, made a start on my list, and have made the decision on which sub-Legion to use now, so that’s positive! 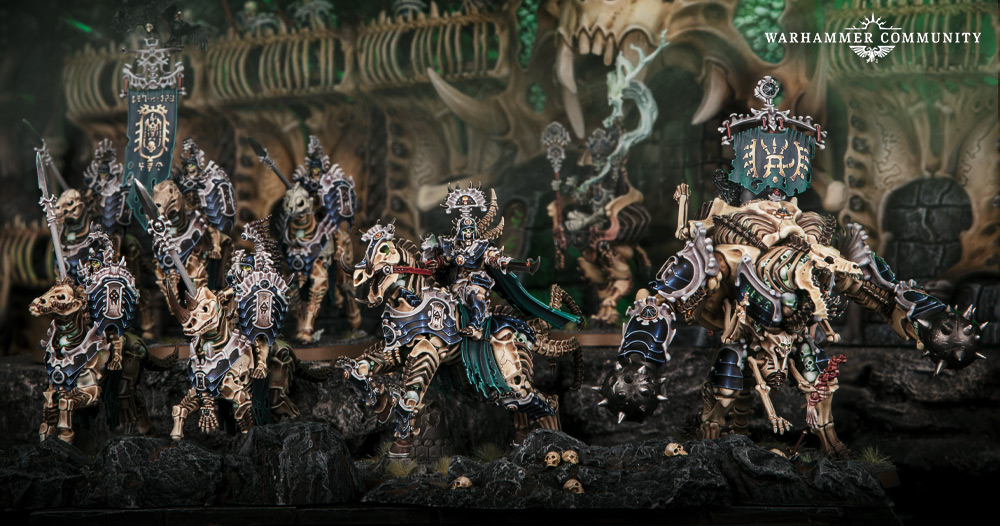 I’m starting out with the unit of 10 Mortek Guard, armed with Nadirite Blades (plus the one-in-ten champion type, who is armed with a Soulcleaver Greatblade which hits on a 3+, rather than a 4+). Nadirite weapons score 2 hits on a natural 6, which is very nice because the unit has 9 of these things, which make 2 attacks each! In 18 dice rolls, there has to be at least a couple of natural 6s, even the way I roll dice!

Mortek Guard are the basic troops, but I’ve ordered some Immortis Guard to give myself some elite options. These guys are armed with halberds that have a slightly improved stat line to the Guard’s blades, but importantly they also attack with their massive shields, which has the same Nadirite weapon ability of causing 2 hits on a natural 6. Fantastic! Furthermore, they have a command ability that lets them attack for a second time with the shields – anything that gives extra attacks is okay in my book!

The Immortis Guard also have the HEKATOS keyword, which is the name of the sergeant-type guys, and triggers off a number of other abilities, including the Legion-specific command abilities. For my Legion choice, I’ve gone with the Mortis Praetorians, which is the Legion on the box art, and the one with the named characters in there. I’m not sure, because I’m thinking like a 40k player, but I imagine that I can’t include those characters in my army if I were playing a different Legion… anyway!

Mortis Praetorians have a fear-like army-wide rule that subtracts 1 from the bravery of any unit within 12″ of them, and the command ability allows you to re-roll hits for units within range of a HERO or a HEKATOS, which is nice!

Speaking of heroes, I have got the Mortisan Boneshaper, a support wizard that can heal units, with a spell that lets them deal mortal wounds to enemy units based on that unit’s model count. It’s a variation on a fairly popular theme, but I think he’ll be quite useful in the back-line (his spell is 18″). I’ve got my eye on one of the named characters, Arch-Kavalos Zandtos, though currently haven’t pulled the trigger on buying him (it was him or the Immortis Guard this month!)

As a bit of heavy support, I have the Gothizzar Harvester to go about healing my chaps in a similar manner to the Boneshaper, though I’m also arming him with Soulcleaver Sickles, which increase the attacks for larger units. I’m not entirely sure how big this guy is, but I’m thinking somewhat Carnifex-sized. Should be a nice sort of centrepiece model while the army is still small-ish, though!

There is a lot to do right now, for sure, but I’m trying to focus myself on building and painting one unit at a time (might do the hero alongside the big guy though). My principal focus for the time being is to get the equivalent of a Start Collecting box painted, so I’m thinking the troops, the hero, and the big guy. I want those finished by the end of February, and given how quickly the Guard have progressed since I started painting them on Saturday, I’m hopeful this is achievable! I may even get the other 10 warriors painted up in that time, actually!

Following a flurry of interest back in September, Warcry has somewhat fallen on the back burner once more for me, as 40k and Necromunda took over my life for the remainder of the year. However, I’m really on the fantasy kick once more with this current project, and I’m really enjoying the return to fantasy models and all that entails – it’s always the same for me when I come back after time away, it’s like my world is blown open and I remember why I got into this whole mess in the first place.

Back when I bought the first few Ossiarch Bonereapers kits, I also picked up the Warcry cards for them, as I think the store had one left in stock, and I thought, why not? The Bonereapers seem to have a fair number of units available to them, made from three boxes: the Mortek Guard, the Necropolis Stakers (the Immortis Guard aren’t allowed, oddly), and the Kavalos Deathriders (the cavalry units). There are two leader choices, one of them mounted, and a whole host of new rules for unit types that I’d not come across when I initially tried the game out, so that’s been exciting!

There is the “bulwark” runemark which grants an ability that can be used by shield-wielding Mortek Guard, giving them +1 toughness, and two units for the “destroyer” runemark, which can be used by the Necropolis Stalkers to grant an additional move on a double, or a bonus to the number of attacks made on a quad. Very nice! 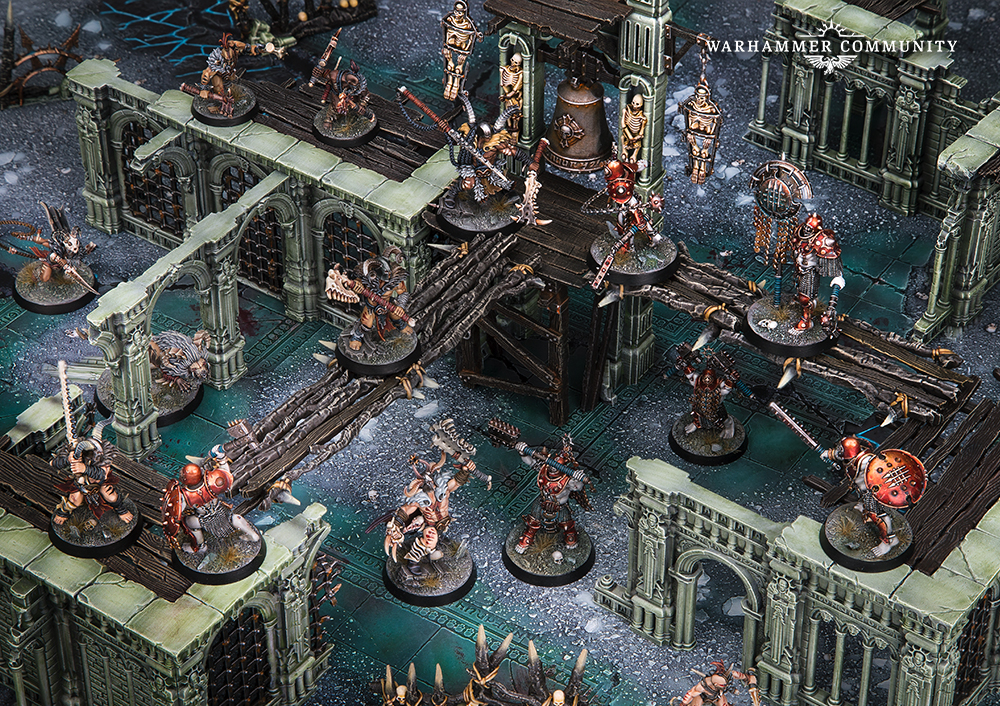 Warcry is definitely something that I’d like to try out some more, as I really do love the look of the game. For a 1000-point warband of Ossiarch Bonereapers, I’ve thrown together the idea of a Hekatos, a Necropolis Stalker, and the Guard champion fella, with six further Mortek Guard to get me nine guys at 985 points. Could be quite interesting, though I suppose there’s only one way to find out!!

5 thoughts on “New Army Update One”