At the weekend, we had the latest Warhammer preview, showing off some of the new stuff that’s coming up in 2021, and some of it is very exciting, to say the least! I really hope this year brings us some awesome new toys, because let’s be fair, it’s been pretty grim these last few months, and we currently don’t have any sort of end in sight…

First off, we have the Sisters of Battle version of the Nemesis Dreadknight. It’s a little silly looking, in particular when you try to imagine the dimensions of the pilot and imagine how long her neck must be. But new models are always cool, even when they’re not necessarily the new models you’d have hoped for. No Biker Sisters? Hm. I’m curious as to whether, between this and the Palatine model, we have enough to warrant a new Codex already? Will we be seeing even more new kits? Hm.

Next up for 40k is a new expansion for Kill Team, showing that skirmish 40k hasn’t entirely been abandoned. I believe that this set is in addition to the re-vamp promised for the system later in the year? I’m a little sad that it seems we may need to wait longer still before getting the Chronomancer and Flayed Ones as separate kits, though I guess it’s possible people might be splitting these sets on eBay.

On a separate note, I’m really pleased to see the Psychomancer up for preorder soon! It seems like ages since I wrote my Necrons list with that guy in there! 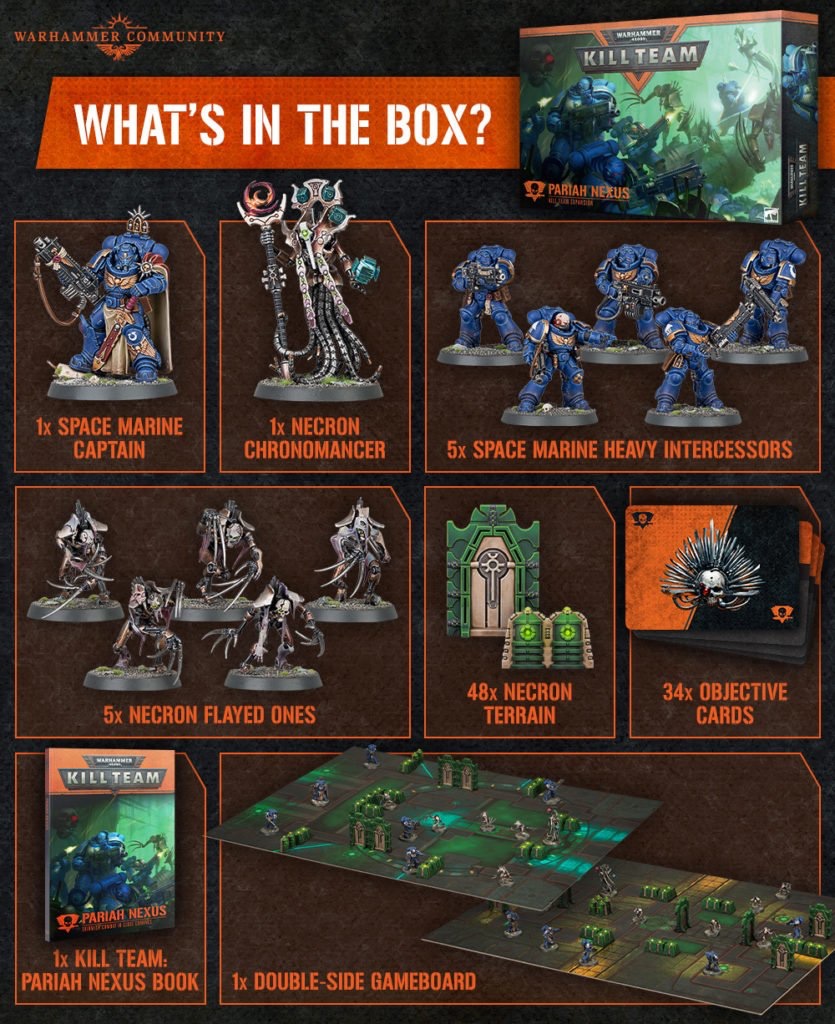 The new Kill Team box is likely going to be a pass from me, price depending, but it’s interesting to note that this bundle gives new players who picked up Indomitus, or any of the new starter sets, a nice little expansion to those armies while also getting a different sort of game. Nice one!

We’re off to the Mortal Realms now, however…

I am categorically not about to start an army of High Elves, but I think it’s really neat to see how GW have taken the old classic elf fantasy trope and combined it with something a bit more eastern/otherworldly, with these huge animal-spirit-type forces-of-nature thing they have going on. Very Studio Ghibli. The Teclis model is strange as all hell, for sure, but I do like these big mountain spirit things!

We’ve seen some of the Vampire previews doing the rounds, but finally the new Soulblight Gravelords are making an entrance into the game with a new warband for Warhammer Underworlds, and they do look very nice! Just to reiterate, I’m not about to start yet another new army, but I could see me picking up this warband, to actually try out this game!

We’ve recently seen the update for Warhammer Underworlds, with the Slaves to Darkness warband going up for preorder soon, and what looks like an Ossiarch Bonereapers warband coming up in May. Direchasm is shaping up to have a lot of nice warband options, that’s for sure! It’s definitely time that I tried this one out, I’m thinking!

The big news, for me, is this. We’ve got a new version of Warhammer Quest coming out, and it’s once again in the Mortal Realms. However, this one miniature has got me completely drawn in – I’ve been trying to calm myself in regards to buying new stuff, but look at that guy! If we think back to Silver Tower, and all of the Tzeentch-y weirdness that we had there, this has the potential for unspeakably good zombie minis along the lines of this gravedigger lad.

Time will tell, but this is definitely one to keep an eye on, as the miniatures design shown off in just this one guy, combined with everything they’ve doubtless learnt from Blackstone Fortress, will surely make for an incredible experience!

It vaguely surprises me how, in recent weeks, I’ve moved back into what I suppose is my first love from Games Workshop, the fantasy stuff. 40k is still up there, don’t worry, but I do find myself increasingly enamoured of the Age of Sigmar miniatures line, and I think going all-in on the Bonereapers army recently testifies to that.

I’ve been worried recently that my drive to hobby has been waning, in part due to lockdown stopping me playing games, but seeing stuff like this coming over the hill has started to fire me up once more!