I’m not sure if I’m actually going to reinstate the whole Tuesday-game-day thing in 2021, but hopefully I can write more about my games here as the year goes on! We’re now in Lockdown #3 here in the UK, where staying home is pretty much the new way of life for us, so what’s better than playing loads of games, right?! Today, I thought I’d have a bit of a ramble about my latest endeavour, playing through more of the Lord of the Rings scenarios that I’ve never explored. Given that the game ended last year (well, went on hiatus), I’m probably a bit late to this party! But it’s among my all-time favourite games, and I want to devote more time to it.

If you’ve been reading my blog for a while, you might have noticed a slip here – I’ve long thought of Lord of the Rings LCG as “my favourite game”, even when it was curb-stomping me, and even when I wasn’t playing it regularly. Now, however, I’m much more into Arkham Horror LCG as being a better overall game experience, though I come back to Middle Earth for the nostalgia trip!

Over Christmas, I decided to make the effort to play at least one full cycle from one of the five or six later ones that I’d never taken the time to explore, and settled eventually on the Angmar Awakened cycle. This one begins with The Lost Realm deluxe expansion, which brings the game into the north of Middle Earth, and explores the area to the north of the Shire, in the Lost Realm of Arnor. Hence the name!

There is a very strong Dúnedain theme developed across the player cards of the cycle, where the main focus is around engaging enemies. It was recently pointed out to me that this theme was telegraphed from way back in the core set with Son of Arnor, which I find pretty neat. 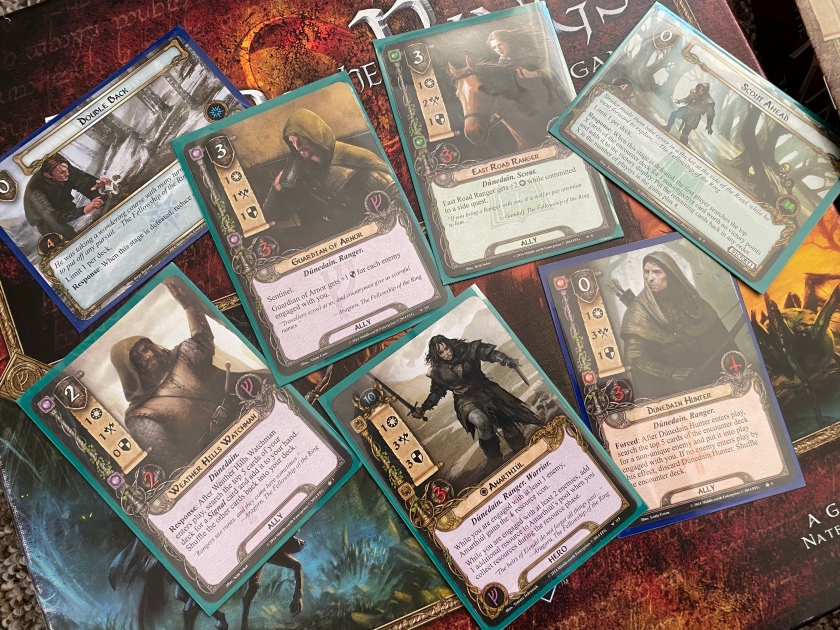 As the cycle moved on, and certainly as further cards came out in subsequent cycles, we’ve seen the Dúnedain theme become quite strong, rewarding players for engaging multiple enemies (although, I have to say, there are few defensive cards associated with the trait than I’d like!) It’s almost a high risk strategy, which sort of brings me to the next new thing in this cycle, Valour. A lot of cards have two effects, labelled Action and Valour Action. The Valour Action can only be triggered if your threat is above 40, but usually gives a much bigger effect – such cards have effects like ‘ready a character you control’ for the normal Action, and ‘ready all characters’ for the Valour Action.

But let’s talk about the quests in this box!

There are three, of course, and they’re all pretty middling difficulty, if I’m honest. I think this is due to the new Side Quest mechanic introduced in this cycle – cards that are shuffled into either your player deck, if it’s a player side quest, or into the encounter deck, and which act as an alternative to the main quest going on. Obviously, they depend upon being drawn to have an effect (although the second scenario, The Weather Hills, does instruct you to set one up in stage 2B), and having one (or more!) in play can make things extremely difficult!

Side quests are almost like extra active locations, in a sense – progress is placed there instead of the ‘main’ quest, and completing the quest does not advance the quest deck. Player quests can have some powerful effects, whereas encounter side quests can bolster enemies in play, so need to be removed!

The first scenario is Intruders in Chetwood, and serves to set the story up. The heroes are helping the Dúnedan Rangers in clearing out some Orcs that are marauding through Bree. In many ways, it’s similar to scenarios of the past – we have the objective-ally Iârion whom we need to keep alive, in a scenario full of enemies and nasty effects, some of which can trap him.

The Weather Hills is a bit more brutal, as we pursue the Orcs into, well, the Weather Hills. However, it seems that there is foul sorcery afoot! There is an objective card in play that collects tokens when enemies are defeated and, when flipped over, acts as something of a timer for the quest.

We pursue the Orcs into the old border fort of Amon Forn, where we discover the remnants of some depraved ritual having been carried out. Rescuing at least some of the prisoners from Bree, we take them to Fornost and have a chat with Aragorn, no less! But then – the sun goes down, and all hell breaks loose when Thaurdir, the spokesman for the prisoners, turns out to have been an undead wight!! 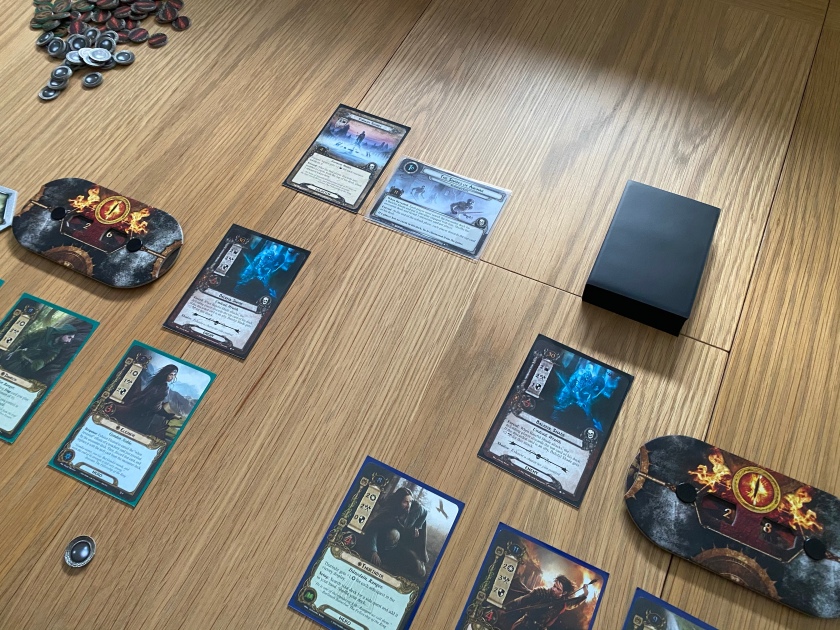 Deadman’s Dike tasks us with defeating the undead hordes roused by Thaurdir, though it is very much a ‘just survive’ type of quest. Thaurdir cannot be defeated, but if he doesn’t have damage on him equal to his hit points when the final progress token is placed on the quest, we haven’t yet won!

The story ends as Thaurdir escapes with Iârion captive, and we swear to his younger brother Amarthiúl that we will help to rescue him.

It was a bit odd for me to be playing a deck that included Amarthiúl from the start, although his hero card wasn’t released until the penultimate pack in the cycle! I’ve been playing two-handed solo, which is a completely new experience for me, and was actually a whole lot of fun – not least because I was finally able to experience both the Ranged and Sentinel keywords, so that was good! Whether it was helped by the fact I’ve been playing Arkham Horror in this manner for a while now, I found this way of playing really quite straightforward, and didn’t really get that confused by everything that was going on. The one concession I made, though, was to not pass the first player token.

The scenarios were really good, I have to say. I played the first one years ago, but don’t remember doing too well. However, aside from a miserable failure with the first Harad quest back in 2018, this box marks the first time in a long time that I have played “new” quests in this game! So that was pretty exciting to realise! There is a lot of theme in the scenarios, I think, and they don’t seem entirely impossible when playing with two decks, so that is nice! I was playing Standard mode, and still managed to make it through each one, at any rate – though I have read online that this was the first cycle that really tried to address the issue of scaling the game for 1-4 players, rather than assuming an optimum two.

At any rate, this was definitely an enjoyable experience for me, and I think it’s gone a long way to rekindling my love for the game, after the sound thrashing of the Ring-Maker cycle before it putting me off for years! As far as the Angmar Awakened cycle itself goes, I was a play-tester for that, so have played each one back in the day – albeit with cut-out bits of paper with text and no art! Not that I remember a great deal about it (it was 5 or 6 years ago, now), but I’m looking forward to going through the cycle in pursuit of Iârion, so stay tuned for more updates!

2 thoughts on “The Lost Realm”