Hey everybody,
Christmas is approaching, for those of you with the inclination, but the recent announcements over lockdowns in the UK has seemingly put a damper on things. This is as much as I’ll talk about with politics, of course, as I try to make this blog more of a haven from such things, but I think I’ll probably be posting a lot over the coming days as I try to take my mind off things – and, hopefully, yours, too!

It was my birthday on Friday, and I had a decent haul of Arkham Horror LCG stuff, which was great! I mean, a couple of those bits I’d kept back from recent purchases, such as the Dexter Drake novella and Guardians of the Abyss. I think the birthday haul is pretty indicative of what is on my radar right now, though – between the card game and Necromunda! I haven’t had a proper chance to do more than flick through House of Artifice, but I’m looking forward to digesting that over the coming days! I do want to get another game of Necromunda in at some point, even if it is by myself, because I’m really hooked right now!

Today, I was absolutely brutalised by Passage Through Mirkwood. You know, the introductory quest, the supposedly easy one that teaches you the basic mechanics of the game? I lost four heroes and ended up threating-out after something ridiculous like 5 rounds! #LordOfTheRingsLCG pic.twitter.com/wMW0iDVOHh

I have started to play Lord of the Rings again, though, thinking that I’d start off with Passage Through Mirkwood, the introductory scenario. And it absolutely brutalised me! I had a very bad series of draws from the encounter deck, and playing two-handed was obviously increasing the cards seen over the course of the game, but jeez!

There are a couple of things that I want to mention here, of course. First of all, playing two-handed is actually a real joy. I had the odd moment of “where am I up to?” of course, but those tended to be in the late game where a lot was going on, already. I think perhaps playing two investigators in Arkham Horror has prepared me well for this one, and I think in part that, in comparison, Lord of the Rings is definitely a much simpler game. It surprised me because there is a much more linear plan for the game: you do the same thing round after round, and the variety of it all comes from the different cards being revealed from the encounter deck. Having played a lot of Arkham Horror lately, which has got that element of a board game from having investigators moving around different locations, and the RPG feel of leveling-up cards etc, it gives for a much more complex game. While there are those elements in common, such as effectively playing against the encounter deck and such, it really surprised me that I had that feeling!

Of course, the decks that I was playing were not really built for this way of playing – each one was effectively a solo deck, so they could have dealt with the majority of the game by themselves. As such, I think I could tweak the decks back to dual-sphere and have each one cover the other better.

Interestingly, I went back to basics on this one as well, and read through the instruction manual, as well as watching the tutorial stuff again, and tried to get it right. Back when I first started playing this game, in 2011, I had incorporated a couple of house rules I suppose, to make it more manageable for actual solo play, and I just kept playing it that way. The ‘Basic Game’ as explained in the rulebook does suggest not revealing shadow cards while you get into it, and I’ve played that way pretty much ever since! I was also playing the game whereby if I had optionally engaged an enemy, I would attack it first rather than allowing for all enemies to attack me first, regardless of who engaged who. In my mind, it made sense that I would be able to do this, because otherwise it’s the equivalent of going up to someone for a fight, and letting them hit you first? Of course, there are player cards that allow you to dodge attacks and the like, but it always struck me as really odd that I couldn’t natively attack first when it was my choice to engage with that enemy!

Anyhow, playing the game correct, I thought, would be a lot of work, but as it happened the first game was over in 5 rounds, as I was just unable to overcome the threats in the staging area, due to bad draws from both the encounter and player decks! Any allies that I had were dying to enemy attacks as I threw them under the bus to just try to deal damage to the enemies engaged with me, but as time went on, I had to throw my heroes at them as defenders, meaning I was in a holding pattern of doom until round 5, when four of my six heroes were killed off. It was shocking!

I did later that same day play again, after briefly considering trying out the official Easy Mode of removing some of the encounter cards, but in the end went for a straightforward shuffle-up-and-reset, and I managed to prevail. The game was a lot longer than I’d expected, though I think that was in part because of the two-handed thing, but also simply because I was trying to defeat Ungoliant’s Spawn, which was the fourth card from the bottom of the deck. Still playing without shadow cards, I wasn’t drawing as many encounter cards as perhaps I could have been!

It’s interesting though, to me, that playing without shadow cards can be such a dual-edged sword; on the one hand, you’re potentially buffing enemies when they can already be a bit unwieldy, but almost in return you get to cycle through the encounter deck quicker, and can potentially avoid having so many locations or so many enemies coming into play. I suppose this is something to think about when we’re talking about implementing house rules or whatever – the game has been tested to play in a certain way, and is as balanced as possible based on its own rules. Adding to these, or changing things, can tip that balance and sometimes lead to a less-than-optimum experience. Certainly something I need to bear in mind when I’m complaining about “how tough is this game?!” 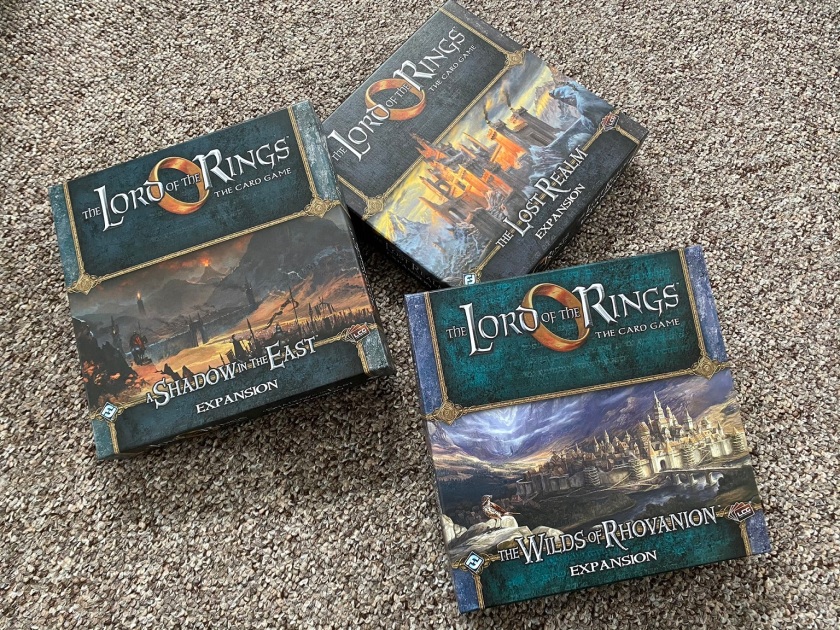 I’m still going to be playing through one of these cycles over the Christmas period – at least one, maybe more! – so look forward to hearing more of my musings as I properly get back into what I have always been calling my favourite game!

I picked up the latest White Dwarf this morning and, as I have the day off (yay!) I had a fairly leisurely breakfast while flicking through its pages. There’s a lot of Age of Sigmar stuff in there, which I kinda glossed over because I’m not big into Spiderfang Grots, but I was reading Robin Cruddace’s column on the new 40k rules, and it was quite interesting to see why they changed some of the rules from 8th to 9th edition.

I’ve talked briefly about this recently, but in some ways I think 9th edition coming out in the middle of a global pandemic, when there are so many restrictions in place that the GW stores themselves can’t even run demos of the game or have people in there for any longer than absolutely necessary, does seem to be a bit of a swing and a miss. Any sort of excitement around the new edition has been, for me, tempered by the fact that I couldn’t immediately play it, and the few games that I have managed to play since it arrived were a weird sort of hodge-podge of rules, in part because I was playing an 8th edition codex in a new game. Granted, it wasn’t massively different, though for something like Necrons, trying to play with the army when Reanimation Protocols had changed, but we didn’t have the rest of the rules yet, was such a weird experience. Now, I know plenty of other folks will have been through the pain barrier between editions where they’re using a book from an edition or two ago, but it’s difficult to get my head around!

It’s curious, although perhaps not totally unexpected, to see how I’ve almost gone off 40k in recent weeks. I think the lack of any outlet to play has a lot to do with this, as I’ve got no real motivation to paint anything up while there’s no end in sight to these lockdowns! I’ve moved into solo-able games so much that 40k has almost been left behind, but I do think it’s about time I used some of the down-time to get some projects finished, so that I can play with fully painted models when this is all over! I’m sure there’ll be more on this to come in the next couple of weeks – if only from the now-inevitable Hobby Resolutions blog! Now is not the time for a retrospective on that one, of course, but it’s definitely been a mixed bag in 2020, with some successes as well as some that have fallen by the wayside. Stay tuned for that blog, coming up sometime next week, no doubt!