Hey everybody!
It’s my 999th post on this blog! What an incredible milestone! I honestly didn’t give things much thought back when I started this endeavour back in 2014, but I suppose as time has gone on, I suppose it’s been quite exciting to see the blog growing – even if it is with my inane babble! As we gear up for post number 1000, which is already written and scheduled to go live tomorrow, I thought I’d have a bit of a catch-up blog with you all, and dip into some of the stuff that has been going on in recent weeks!

Recently, I’ve been playing a lot of Arkham Horror LCG, and enjoying myself immensely. Back when I first played the game upon release, I definitely knew that I enjoyed the game, but always seemed to struggle to get round to actually playing it. It wasn’t until last year, almost three years after the initial release, that I got round to actually trying out a full campaign.

Now, however, I’m firmly entrenched in the whole thing, having really revitalized my enjoyment of the game and throwing myself in whole-heartedly! I’ve made my way through two full campaigns now, and I’m poised to start on a third over the festive season, tackling The Circle Undone with Diana Stanley and Joe Diamond. Having sleeved the cards for this cycle, it’s been exciting to see that this one focuses more on the classic trope of regular cultists trying to bring about the end of the world, rather than fantastical creatures and the like. I’ve been recording my games here on the blog, and I’ve set up a page specifically to collect these posts together. I’m sure I’ll be trying out some campaigns multiple times, too, but I want to try out all the game has to offer me, and make up for lost time!

Interestingly, all of this Arkham Horror LCG has got me thinking about trying my other great card-game love, Lord of the Rings LCG. It’s been a long time since I have last played this game, I think I tried my hand in one of the early scenarios in the summer-time, but playing this game has really dropped off my radar in recent years. It’s interesting, of course, because I still really love it, and I still call it my all-time favourite card game. I suppose part of the reason for me having stepped back a bit from it resides in the fact there is just so much of it now. The game wound up a few months ago, after the last cycle took an absolute age to actually see all six packs released – in total, we have nine full cycles, eight deluxe Saga expansions, and about a dozen standalone scenarios. It’s quite mind-boggling, really, and the player cards have become quite the beast to wrangle!

Earlier this week, as it happens, I spent a sleepless night looking through my collection once more, and reliving some past memories as well as tinkering a little with my favourite Rohan deck. The whole thing was brought about because I wanted to re-sleeve some of the cards, requiring the transparent sleeves for Arkham Horror as it happens, but it really took me on that journey down memory lane, to the time when I would excitedly play each pack in the Mirkwood cycle as it was released – spending yet another sleepless night back in, what, 2011, playing The Dead Marshes. Ah, memories!

I’ve currently got four decks built up and ready for the game – the Rohan deck, a Dwarf deck, an Elf deck, and more of a generic/mix that uses a number of Dúnedain and Outlands cards. Going over these (and re-sleeving them), and sorting out a lot of the later packs from Harad, Rhovanion and Mordor, has got me thinking how I’ve never really ventured very far into this game, always returning to Mirkwood and the Dwarrowdelf, without really exploring any of the cycles from Ringmaker onwards, really! Looking back, I got as far as The Dunland Trap from that cycle (the game’s fourth, just fyi!) while playing what I would call regularly, back in 2015, and have pretty much given up, since! Sporadic plays of a scenario from Angmar and Harad notwithstanding, I’ve pretty much let the bulk of this game pass me by, whilst still compulsively collecting it!

Well, hopefully that will change soon!

I’ve got my eye on playing some of the newer quests, potentially with that Dúnedain deck, or else with the re-tuned Rohan deck, over the festive period (although probably more like the new year weekend). I’ve even been considering building up an entirely new deck, using the newer player cards to build around the Dale theme. I’ve got my eye on trying maybe The Lost Realm, or else Vengeance of Mordor as that has struck me as a very intriguing cycle. I’ve heard so many good things about the Ered Mithrin cycle, though, so that is also a strong contender. Of course, I playtested on the Angmar Awakened cycle, but I think I came into the game after the playtesting for the deluxe expansion had finished. I have lots of bad memories of never being able to escape from the dungeons, but it’ll be nice to actually play the game in its finished form, with artwork and not the badly-formatted black-and-white printouts that were sleeved on top of other cards!

So that’ll be something good to look forward to!

What else has been going on?

Well, I’m quite excited to say that I’ve pretty much finished my first major terrain piece! I mean, I’ve painted up some ammo crates before, but I’m quite excited for this one! The Sector Mechanicus stuff is really nice, and I have rather a lot of it after all, but I think after the game of Necromunda the other week has got me thinking more about terrain and whatnot, so I think it’ll be nice to have some done. I’ve been working on a Galvanic Magnavent lately, building it up to reflect the back of the box rather than the “standard” build from the front (I’m pretty sure I did that with another piece, too…) so I think when I have these big pieces painted up they’ll look really good out on the table! 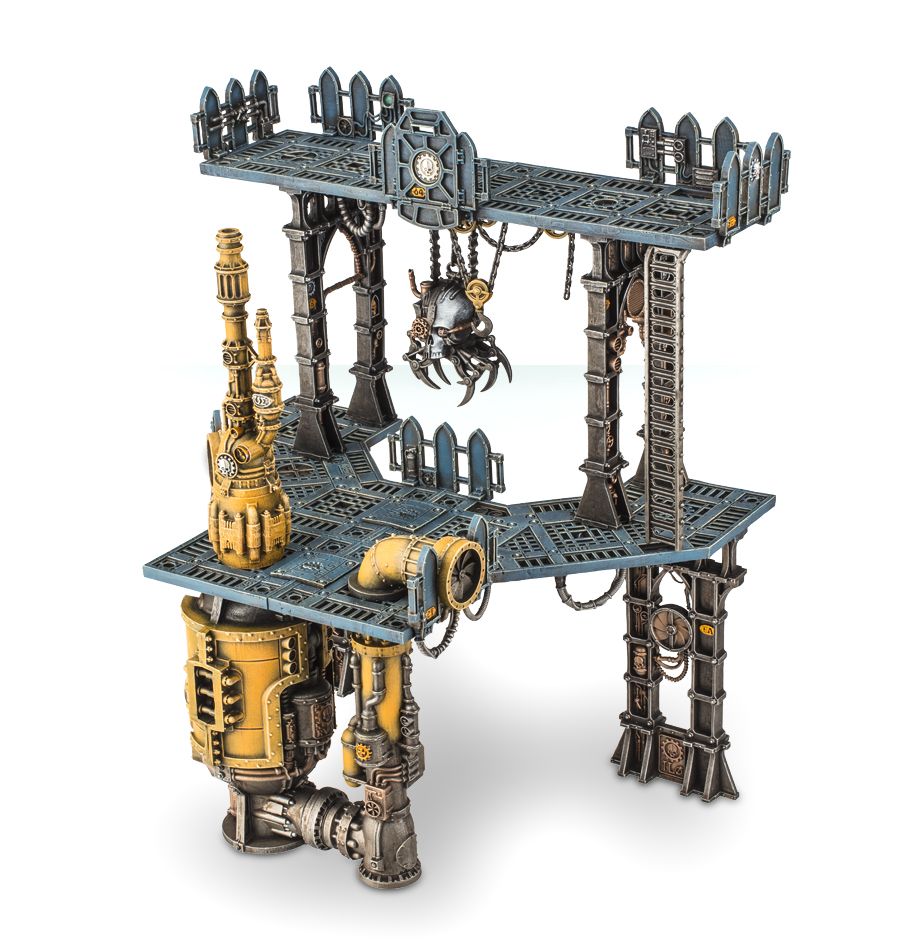 Let’s talk about Necromunda though, as it’s something I’m hoping to try out again over the festive break (first Lord of the Rings, more Arkham Horror, and now this?! Where will I find the time…) I’ve been reading up the rules for scenery from the Book of Peril, and I’m quite excited by just how interactive the battlefield can get! So it should be really interesting to see how all of that works (although it might not be something that I get to straight away, as there are a lot of moving parts in this game, after all!)

It’s not all about the scenery though, as I’ve also been building up some more Van Saar folks as the excitement around House of Artifice increases! My current leader comes in at a whopping 310 credits – I know Van Saar are expensive, but that’s a third of the starting gang, so I needed to slim them down a bit. This chap, above, is a much more respectable 245, which means I can actually fit in another body, between trimming down the leader and champion options. I think that game I linked to earlier definitely showed just how much the advantage of numbers can go in your favour – and expensive gangers are of no use to anybody if they’re Prone and Pinned!

We need to talk about this. I don’t think I’ve properly recovered yet, of course! But 10 new Star Wars series’ is just phenomenal! The Mandalorian is showing that Star Wars can absolutely have a future on the small screen, and I am so excited to see what they’re going to do with it all. I probably need to confine my thoughts on this to a separate piece, but suffice it to say, I’m really happy with what’s going on there right now!

So, folks, that’s almost a thousand posts finished! Come back tomorrow to celebrate my birthday with Post 1000 itself – I think it’ll be a good one!