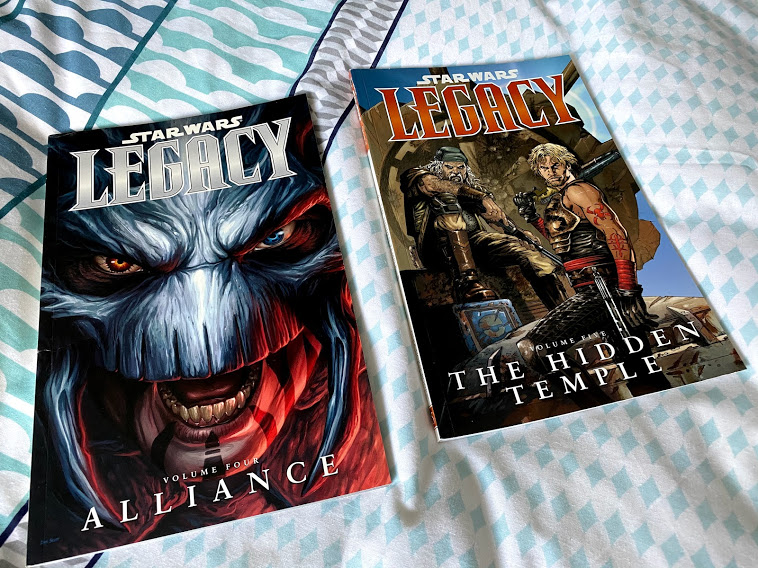 Volume Four: Alliance
After the dramatic events of the previous book, we have a swift change of pace now as we look to the wider galaxy, and catch up with what’s happening with Admiral Gar Stazi of the Galactic Alliance. The Empire attempts to trap Stazi by presenting him with an irresistible target, a new Star Destroyer being built at the Mon Calamari shipyards, the Indomitable. Stazi doesn’t disappoint, and the Empire think they have him in their clutches only to have the tide turned on them, and the Alliance makes off with the ship. In retribution, Darth Krayt personally initiates the mass-genocide of the Mon Calamari people. Stazi decides it might be time to once again pursue an alliance with Roan Fel.

There is also a one-shot issue that follows Darth Wyrlock as he attempts to find answers from the holocron of Darth Andeddu to help him deal with his master Darth Krayt’s impending doom.

To begin, I just want to say that the artwork in this volume is not my cup of tea. At times it was far too cartoon-y and stuff, and I really didn’t appreciate it overall. In addition, I wasn’t a huge fan of the storyline – I can remember reading this one back in the day and enjoying the fact that we were getting to see what was happening in the wider galaxy. I found there to be several missing links in the history that I wanted to see resolved, but now I found that I was just getting confused by things. There are a lot of flashbacks to the earlier war between the Galactic Alliance and the Empire, but nothing seemed to be really explained, which left me with a sense that the war was simply there as a device to have the galaxy in the state that it currently is. I can’t remember if there is any more detail to come, but I am a little deflated at this point in the timeline, trying to work out what on earth the backdrop to these events was supposed to be!

Volume Five: The Hidden Temple
We’re back to Cade and Co for the fifth volume in the series, as we catch up with the crew of the Mynock after their escape from the Sith Temple on Coruscant. Deciding to lie low for a while, they head to the moons of Iego and Cade’s uncle, Bantha Rawk, formerly Jedi Master Nat Skywalker. Bantha has left the order following the Ossus Massacre, and has established a life for himself with his family. When they arrive, however, Black Sun have been attacking the retreat and the Mynock is instrumental in fighting them off. It turns out that there is a bounty on Cade’s head and a lot of people have been looking for his known haunts to see if they can get ahead of him. Unbeknownst to everyone, however, someone else has arrived at Rawk’s Nest, Cade’s former fellow Jedi apprentice, Azlyn Rae. When the Empire turns up looking for Cade, the crew of the Mynock realises that this isn’t safe, so Bantha agrees to lead them to the Hidden Temple of the Jedi to see if they can help.

However, Azlyn is serving new masters these days, and helps to lead the Imperial Knights to the Temple in an attempt to broker an alliance between the Jedi and Roan Fel. Cade further expounds his plan to assassinate Darth Krayt, in the hope that the One Sith will fall in on themselves and eliminate that threat. The Imperial Knights feel this could well work in their favour, also, as it would allow Fel to reclaim the throne. Princess Marasiah stays behind at the Jedi Temple while Antares Draco and Azlyn Rae accompany Cade and his crew to the deep core, with Shado Vao also coming along to keep an eye on Cade.

After the previous volume, it felt good to be back to what seems to be the main storyline, seeing Cade, Jariah and Deliah going off on their adventures. We also get further backstory on Rav and his pirates, learning more about Jariah Syn and his hatred of the Jedi along the way. More character development is always a good thing, of course, and as the story moves along we see Cade embracing a little more of the fact that he can use the Force.

Jedi-wise, Master K’Kruhk is back, and it’s also really nice to see T’ra Saa from the Republic series coming back here. Of course, it is somewhat arguable that bringing back so many Jedi from these previous stories makes one question how effective Order 66 really was, but also it serves to show how the Jedi were able to come back in such force so quickly after the fall of the Empire. So I guess there are multiple sides to that.

I can’t help feeling as though the story is feeling a little rushed at this point, though, with Cade having gone from being the fringer nobody to suddenly thinking he has to solve the galaxy’s problems. True, he’s doing it to stop the Sith hunting him, but it all feels just a little bit like there should have been more reconciliation between his character at the start of the series, and how he is now. But maybe I’m expecting too much?

That said, though, I think the story moves along much better when it has this focus on Cade & Co, as if Ostrander and Duursema are much more at home telling the tale of their team, rather than trying to hang that story in the wider galactic context.