Hey everybody,
It’s been a long time since I’ve talked about Necrons on my blog, and I haven’t actually talked about 9th edition, despite having a couple of games before the second lockdown! I really need to catch up. I think 9th has been a strange time for me, as it’s been tough to get into it all with having only played a couple of games and all, but I really need to get to grips with the changes, as I want to be ready for when the world returns to normal!

In 9th edition, there’s a lot of stuff going on for armies – there’s an element of customization that I hadn’t really expected, but I’m really pleased to see for the game. Within the game, objectives have been shuffled around a bit so that we’ve now got the option to choose what we’re attempting to do within the scope of the mission, including taking actions instead of the usual shooting or melee combat. With the codex releases, we’re getting faction-specific objectives as well, which aid with the feel of really playing your guys.

Something that I really like is the addition of Cryptek Arkana, which are a bit like relics but better, on the whole, and come with a points/power cost to add to your Cryptek models. It’s a bit like the old fifth edition stuff we had, where you could make your Cryptek a Harbinger of something, which would open up a suite of effects for the model.

This brings me on to the list. I’ve talked before about building my Necrons list for 8th edition where I built around a couple of units, and with this one I’ve gone for the starting point of a Psychomancer. The model isn’t actually out yet, but does look so wonderfully weird that I’m really looking forward to getting one when they make it available! 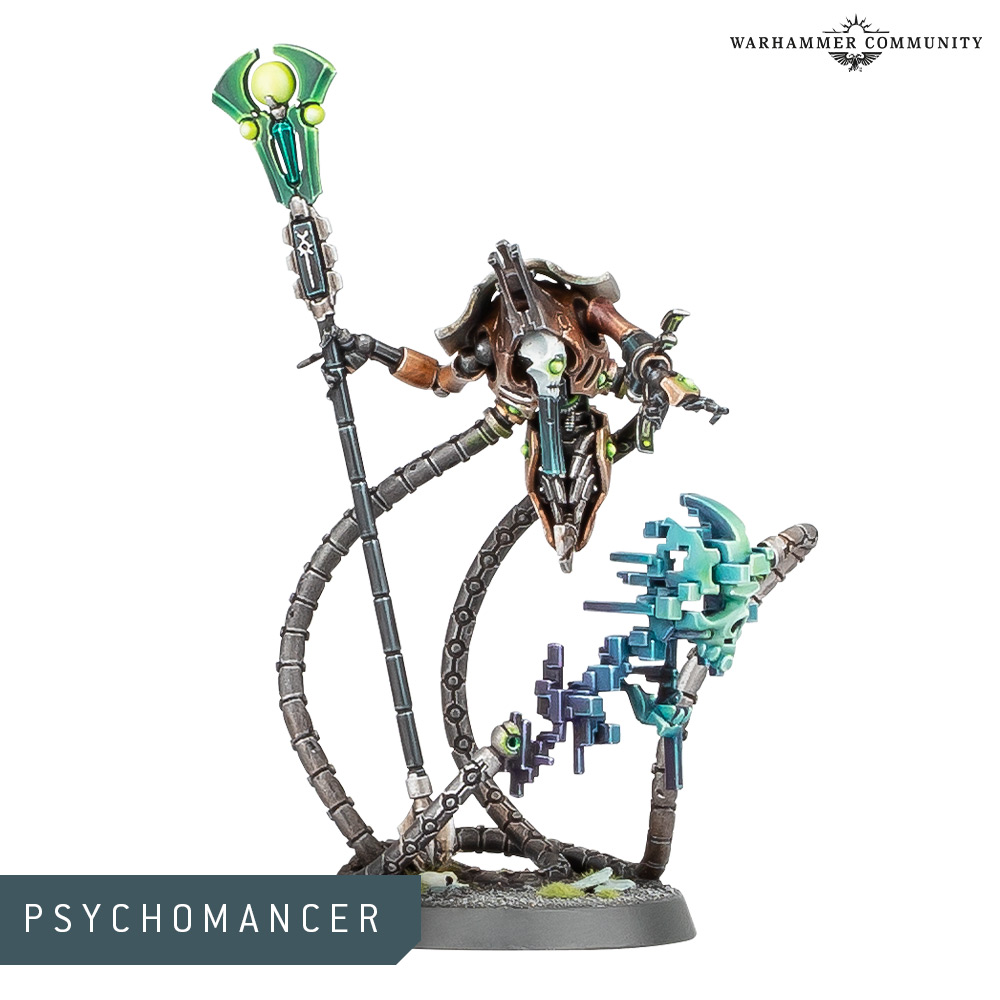 It really shows how insane Crypteks can get, removing parts of their bodies because why wouldn’t you? I do like the new plastic model that came out a few years back, and he’s also taking part in the army, but it’s the Psychomancer that I’ve chosen to give a piece of Arkana to – his special ability, Harbinger of Despair, causes negative effects to units close to him, so the Atavindicator seems like a natural choice, causing mortal wounds in a similar manner. I find him a very interesting model, though, with having former relics as his standard wargear – the abyssal lance and the nightmare shroud.

The plastic Cryptek has been renamed the Technomancer, interestingly. I think the old finecast model can also form the same role, as his weird bit of tech in his right hand (didn’t it used to be the chronometron?) can be used to represent the Canoptek control node, the alternative piece of wargear which adds 1 to the hit rolls of nearby Canoptek units. But I’ve taken the cloak, which still allows the model to double his movement and fly.

Now then. The army is sort of built with having the Psychomancer doing stuff, but he does need to get pretty close to the enemy to do his thing – 12″ for the Harbingers of Despair effect, 6″ for the nightmare shroud ability. At least the Atavindicator is 18″, and causes mortal wounds, which is quite a powerful.

To help with this, I have some Deathmarks who can pop out of their hyperspace oubliette and make a shooting attack when an enemy unit is set up from reserves (although at the cost of 1 command point now – but the synaptic disintegrator has been beefed up!) If they’re not being used for this, however, they can still pop up and provide support for the Cryptek, and now that they’re shooting with a S5, AP-2 weapon which deals mortal wounds on unmodified 6s can be quite a threat, which I enjoy.

Of course, there are some elements that I would say are “standard” for the Necron army – the Catacomb Command Barge as the warlord, three groups of Immortals (tesla has increased in price between 8th and 9th edition, it seems, so I’m sticking with two groups of gauss and just the one tesla cohort), and something that I’m really enjoying at the moment, the Triarch Stalker. It still has the targeting relay rule that allows for friendly units to re-roll hits of 1 if they shoot the same target, which is very nice. It’s also come down in points – I think the 8th edition cost for the Stalker with twin heavy gauss cannon was over 140 points. So that’s always nice!

However, mine is quite a long way from being a finished mini!

I’m sticking with Mephrit dynasty, though it’s worth pointing out that dynastic codes (much like all such “chapter tactics”) now have several rules built in, and not just one. Mephrit still has their improve AP by 1 when within half range, but now adds 3″ to all ranged weapons (except pistols), and allows you to pick both effects from the Protocol of the Vengeful Stars.

Protocol of what, now?

Adding to the tactical complexity, Necrons also have Command Protocols that function similar to the Space Marines combat doctrines, where you pick an effect to be in play for each battle round. Unlike the dynastic codes, all of the units in my list have the Command Protocols rule, indeed it’s only the C’tan Shards (and Tesseract Vault) that don’t have the rule. Provided that my warlord is a Necrons Noble unit, which the Command Barge is, and provided that all of my units are of the same dynasty, which they are, the rule will affect any unit that is within 6″ of a character. Each Protocol has two parts, and when that Protocol becomes active, I get to choose one of those parts to take effect – except for the Vengeful Stars, which my choice of dynasty allows me to keep both effects. Which is nice, as the effects are to improve the AP of each ranged attack on an unmodified 6, and enemy units within half range do not get the benefit of cover against my ranged attacks.

I was prepared for 9th edition to drive up the cost of a lot of my units, but in a 1500 point list, I’m quite pleased to see that I’ve actually ended up with a list pretty similar in size to my usual army. I have no idea how long it’s going to be until we can play games once more – I’m currently living in Tier 2 restrictions in England, so households cannot mix, but hopefully the new year will see these being lifted and life getting back to something like normal. So I need to be ready with my tiny painted men!

The scope here will be to get the Triarch Praetorians, Triarch Stalker and Canoptek Wraiths painted up, and then the Psychomancer whenever he gets released. Doesn’t sound insurmountable, does it?

3 thoughts on “Necrons in 9th”