Hey everybody,
Today I thought it would be fun to take a look at the details that have been doing the rounds online about how George Lucas would have filmed the Sequel Trilogy. I’ve already talked about my own ideas on this subject, of course, so why not look at the man who started it all, anyway?!

This is a discussion of the new information that has come to light in the last week or so, and doesn’t take account of the heritage of Star Wars, which discussed a nine-part saga as far back as the late 1970s. Back then, when Lucas had reined himself in from a twelve-movie series, the final trilogy would deal with Luke growing in his powers as a Jedi, meeting his sister (who was not Leia), and a final confrontation with the Emperor in episode IX. Despite initially thinking it would be good to re-visit the characters when they were older, as time wore on Lucas came to realise that he himself would also be older, and the idea seemed to lose some interest. The setting for these movies was variously from immediately following episode VI, to 20-40 years afterwards, and focusing instead on the grandchildren of Darth Vader.

When filming the prequels, however, Lucas was quite clear that the saga was in six-parts, and was the story of Anakin Skywalker, his life, his fall and his eventual redemption and death. Now, however, we’ve been learning about his plans for a projected trilogy that formed part of the deal with Disney, and it seems as though the idea of a family saga has fallen by the wayside, as while we do hear about Luke and Leia, there’s no real mention of Han or of any children from either Skywalker sibling.

Interestingly, Lucas’ sequel trilogy would have dealt with the immediate aftermath of the Galactic Civil War, and shown the stormtroopers refusing to give up the fight. Something that the Disney trilogy got really badly wrong, in my view, is not giving us that necessary story between episodes VI and VII, so we’re left with this yawning gulf between the movies that merely cling to Luke, Leia and Han without any real substance behind them. 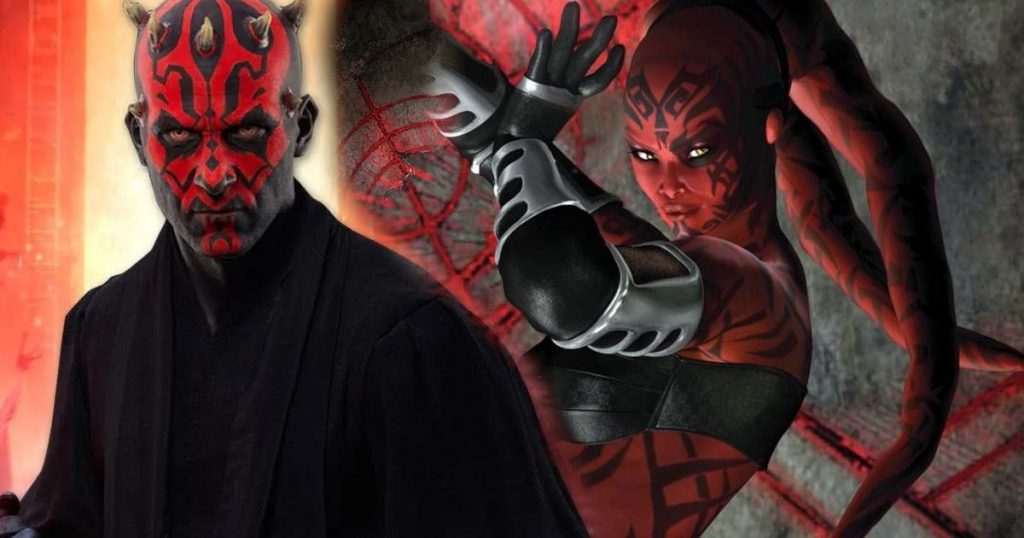 I also find it curious that Lucas was weaving in plot elements from the expanded universe, having Darth Maul return as the robot-legged criminal overlord that he was in season five of Clone Wars, and having Darth Talon as his lieutenant, in a role that has been likened to the Vader of the sequels. As an aside, I’ll be re-reading the Star Wars: Legacy comics this December, so stand by for more of an investigation into Darth Talon!

The main storyline, then, was to involve Leia trying to wrest control of the galaxy from the crime syndicates, and the renegade stormtroopers. Luke is in exile on the planet of the first Jedi Temple, trying to rebuild the Jedi Order. Elements of his outline, such as a female padawan reluctantly trained by him, and a blaster-toting teenager, made it into Abrams’ The Force Awakens, of course, in the shape of Rey and Finn. But I do recall Lucas being very upset around the time of episode VII’s release, so I guess rejection of his story ideas was a part of that.

I think it’s definitely interesting to have the idea of the fall-out from toppling a regime explored in the movies. While we’ll probably never see any of this stuff from Disney, I think they do still need to address what happened next, following Return of the Jedi. We saw tiny glimpses of this in the Aftermath trilogy, and there are some aspects of The Mandalorian that are also looking at the lawlessness of the New Republic period, but nothing that really covers the whole. I think we really need to get to grips with this story vacuum, and explore what was happening after the Ewoks put out their campfires, and see how the galaxy turned into a place where the First Order could rise up.

I do still hope that there are more movies told in the Solo series, that might explore Darth Maul as a crime boss, with or without Darth Talon. There are definitely stories to be told there, so I hope we get someone willing to follow up on this element – even if it isn’t in movie form, maybe a novel or three would sate my curiosity!

I also hope that The Mandalorian can continue for a long time yet, and maybe explore more of this idea of warlord stormtroopers going renegade and setting up mini-Empires in the far-flung reaches of the galaxy. Chapter 10 did touch on this, when discussing the perils of sublight travel, and I suppose we’ve also seen some of it with the feral Imperial warlord in Aftermath: Life Debt. But I think I’d like to see the idea explored properly – though I guess I’d like to see so many of the themes from this proposed trilogy developed more fully!

There has also been a lot reported about the planned sequel trilogy delving into the microbiology of the Force, and we’d get to meet and understand the Whills. Now, a lot of folks dislike the whole midi-chlorians thing from The Phantom Menace, and I’m also in that camp, but I think the prospect of learning more about the Whills is certainly very tasty. It’s a word laden with Star Wars lore from the early days, when the screenplay was said to be “from the Journal of the Whills”. Is Yoda’s species the Whills? What are they? It’s an idea that can forgive any multitude of Gungan sins from the prequel trilogy.

It’s all a bit irrelevant though, I guess, as these are not films that will be made. It’s always interesting to look at these things however, especially when it’s the creator’s own thoughts – however strange they may at first sound!

2 thoughts on “The Lucas Sequels”