Hey everybody,
Tuesdays have always been game days here at spalanz.com and, while I might not always be able to fulfill that with today’s crazy world, I thought I’d still take some time today to talk about the latest game in my Dunwich Legacy campaign, and have some reflections on the campaign system for Arkham Horror LCG as well. Let’s go! 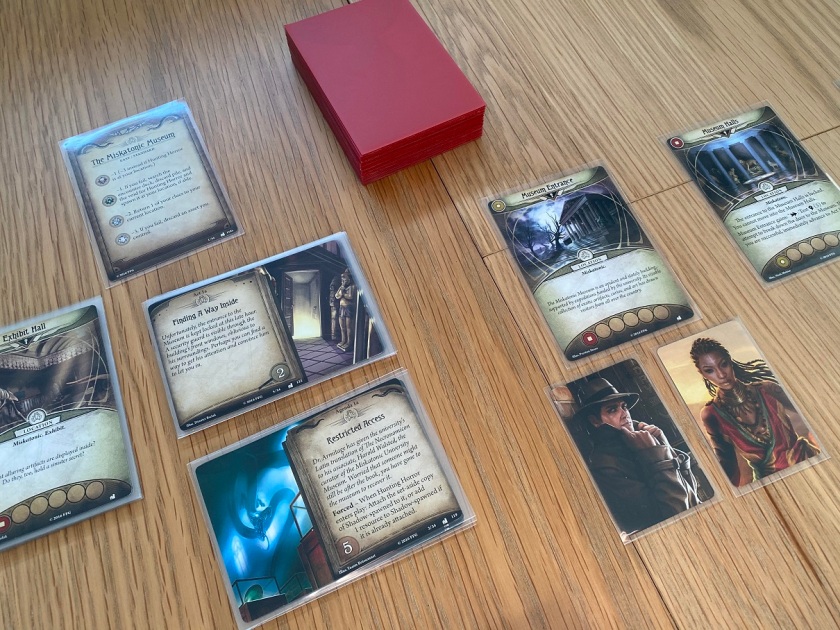 So I played the third scenario in the campaign at the weekend, and had a blast as I went round the Miskatonic Museum, searching the darkened exhibit halls for a copy of the dreaded Necronomicon. The campaign is set in the months following the events of The Dunwich Horror, for those who don’t know, and the investigators are following up on some of the worries of Dr Henry Armitage, the librarian at Miskatonic University. As readers of the original story will know, Wilbur Whateley attempted to steal a copy of the book from the library, and was injured in the process – the game takes this and further expounds that the University’s copy of the Necronomicon was then sent to the curator of the Miskatonic Museum for safekeeping.

This scenario was not perhaps as immersive as the last, as there were a few more game-mechanics involved to simulate wandering the darkened halls of the exhibits. As we moved through the museum, the only monster in the entire encounter deck is the Hunting Horror, which never really dies but goes back to “the void” when defeated, from whence it can strike once more. As it turned out, I had some very good set-up draws for Roland, and he was perfectly equipped to dispatch it each time it turned up, meaning it wasn’t so much a threat as simply an annoyance. But I suppose, that might be the point.

Akachi was therefore left to do a lot of the investigating, which didn’t always work well despite having Alyssa Graham out from the start, giving her +1 to her intellect. As such, the game was a little slow. The object of the scenario is to fully investigate the Restricted Area of the museum, which is one of the many Exhibit Hall location cards that forms part of that separate deck. We ended up finding it fairly quickly, as it happens, and so a couple of card effects allowed both investigators to clear the location of clues very easily.

Akachi has taken possession of the book – in my head, it makes sense from a thematic sense, not just because she needs all the intellect help that she can get. As a Mystic, she would doubtless be attracted to preserving the tome, even if she isn’t going to use it herself – Roland, as a Federal Agent, would perhaps not be interested in keeping the book but rather turning it in (or worse!) Anyway.

Campaign Log
The investigators took custody of the Necronomicon, but sadly that does mean that we have given in to the temptation of power – we’ve added a cursed token to the pool (more shortly), but we have each gained 3 XP!

Now, I have never thought twice about the Chaos bag since I set up my very first game of Arkham Horror LCG almost four years ago. As it turns out, I’ve been playing the Dunwich Legacy campaign, both last year and in this most recent run through, with five additional negative counters! What kind of masochist am I?! I’m playing on Easy mode, because I’m overwhelmingly into the story rather than being brutalised by the encounter deck, but even so! What a fool. So I’ve sorted the bag out now, which is a good thing!

I’ve also been making some upgrades to the decks! In campaign mode, you can upgrade or swap out cards at the cost of experience points earned through each game. Cards have an experience cost denoted by the pips that they have in a crescent underneath the card’s resource cost, in the top-left corner. I’ve managed to get quite a bit of experience for my investigators so far, so it’s time to kit them out anew!

Akachi has upgraded copies of Shrivelling and Alchemical Transmutation to higher-level copies – cards will often have a better version for a higher experience cost, allowing you to hit harder or whatever. If you upgrade cards like this, the experience cost is only equal to the difference between the copies – a 3-cost card upgraded to a 5-cost card will only cost 2 experience, for example. However, you can also swap out a card for a completely different one, which I’ve done in a couple of instances, as well.

Roland’s deck, however, felt a bit more difficult to upgrade. Akachi had a clear path, really – upgrading her spells to better copies of those spells, while keeping the majority of her supporting cards the same. For Roland, there weren’t a great deal of cards for him to upgrade to. However, I’ve come across a couple of gems that are definitely worth mentioning. The above Keen Eye is a Permanent card, which doesn’t have a resource cost in the top left: it starts the game in play, and can never be discarded. It costs 3 experience to purchase, however, so it’s not something you’re going to play with in your very first game! However, if he has the resources to play it, it can be very strong! I’ve also gone for the Guardian tarot card that came out during the Circle Undone cycle, giving him +1 strength.

These cards are pretty neat, as they are a new type of slot (so don’t take up a hand or body slot, etc). While Roland might not be one for reading the Necronomicon, I can totally see him being the sort of superstitious type who might well be carrying a tarot card with him.

I really like the deckbuilding in Arkham Horror LCG now. When I first started playing, I was a little bit dismayed that I couldn’t find viable cards to include in my strategies, but I think that was probably my inexperience with the game showing – thinking about what you want your investigator to do usually makes your decisions quite easy. For Roland, I wanted him to fulfill the roles of fighter, healer and investigator, which he is quite well-equipped for, having access to a lot of healing cards as a Guardian while also being able to tap into the Seeker cards for investigation. Akachi, on the other hand, was initially a bit more complicated to build for, until looking properly into the Mystic possibilities, I turned up a lot of ways of using Willpower for other tests (such as fight or investigate actions). With a massive Willpower attribute to start with, along with myriad ways of increasing her attribute there, she is again quite straightforward. Of course, the Mystic class does have a lot of tricks that you can use, which can make it less than simply straightforward…

I’m really enjoying myself with this game though, and I’m looking forward to playing through all of the scenarios on offer!

One thought on “The Miskatonic Museum”