This weekend, we’ve had another Warhammer Preview from the Community team, looking at a whole bunch of stuff from across a multitude of game systems. Let’s take a look!

We’ve got a new campaign coming, which looks like it might be the start of bringing out these lieutenant models that were teased a while ago: Death Guard vs AdMech (with Imperial Knights, and my favourite Drukhari!), which should be fun! I’m a bit curious about the title for the book, “Act One”, which seems to imply there’ll be more where this came from, which sounds a lot like another Vigilus. Remember when we had Shield of Baal, which was a Blood Angels vs Tyranids, with some Necrons and Sisters action on the side? When we had Warzone Fenris that was just Dark Angels, Space Wolves and Thousand Sons? 7th Edition had a lot that needed to be fixed, but at the same time, it was nice when a campaign had a much tighter focus. To me, it doesn’t matter if my Necrons aren’t featured in the current campaign – if I have a different campaign coming up that might have them front and centre instead. By trying to have all of the factions involved, it seems to dilute something from it, and can make a lot of it seem forced. But I guess we’ll see!

Getting back to the Drukhari, though…

Oh man, we’re going to be the first xenos codex of 2021! Hopefully we’ll be able to play actual games with it soon after, too! I’m very excited to see what is on offer, as I’ve heard we’re going to lose that penalty for mixing Kabal, Cult and Coven. I mean, I’d been experimenting with a mixed force that went back to the Index days towards the end of 8th edition anyway, so this will be good to find out more!

We’ve been promised “lethal combat damage across the board” – I hope that transpires to making a lot of the Cult units truly horrible. Whenever I’ve taken Wyches to games, they have rarely (if ever) made up their points in terms of the damage output. I mean, they should be truly terrifying to come up against, but end up just being a bit… meh…

The Dark Angels are also getting their Codex, with promise of more stratagems to hunt the Fallen. I mean… they’re really pushing the theme on this, fair play, but it’s very niche, don’t you think? I’m sure if you’re a Dark Angels player, and have regular matches against Chaos Marines, you’d benefit, but so many of these rules specifically mention the Fallen. I don’t really know what you’re going to expect from the new book, but I’ve definitely moved away from the army (despite loving the aesthetic!)

Okay, let’s get to something that I’m really excited for now! House of Artifice is coming to update House Van Saar in Necromunda, guys!

I am very excited about this! As we’ve seen for three gangs already now, we’ll be getting new leader-types and new juve-types – but my goodness, we’ve got juves on hover boards! I mean, Christ! This looks fantastic! 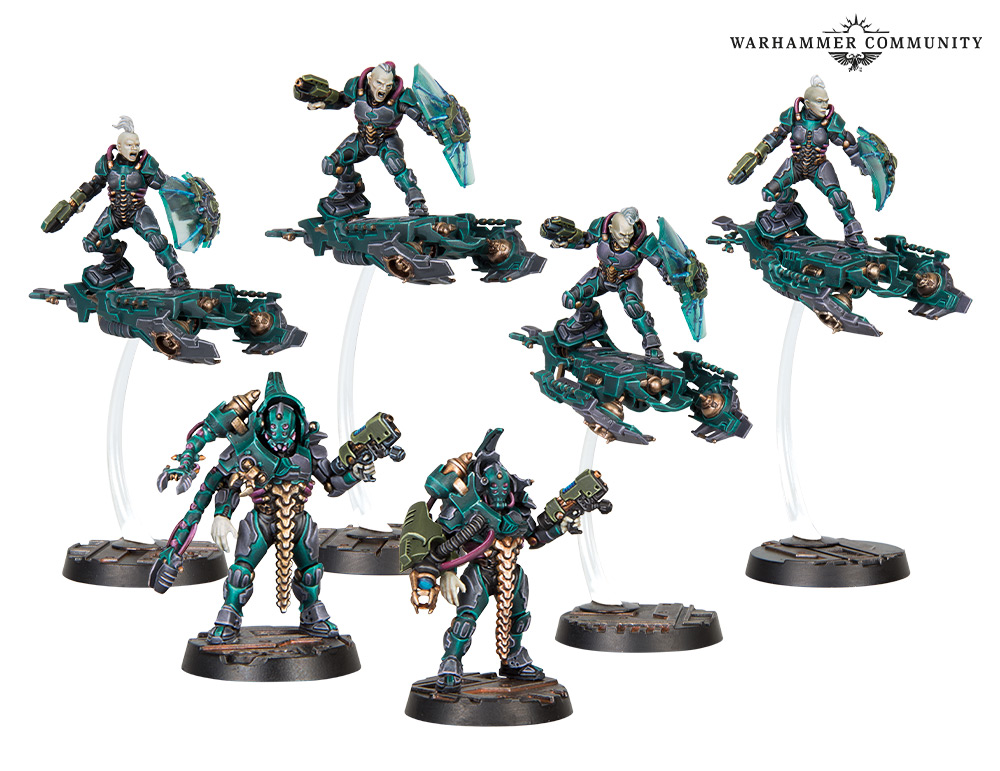 I’m looking forward to seeing what the rules are around these leaders as well, with their spider-arm weaponry up top there. They look great, and while I do love the main gang box, I do like their posture!

I’ve been somewhat on the fence about the new Direchasm set, although the fact that it has Slaanesh mortal units in there, I will most likely be picking it up in due course! However, these Slaves to Darkness do look really wonderful, and not just for the board game – that sorcerer character looks great, and I think I’ll definitely be picking up a box!

Speaking of Slaanesh, though… 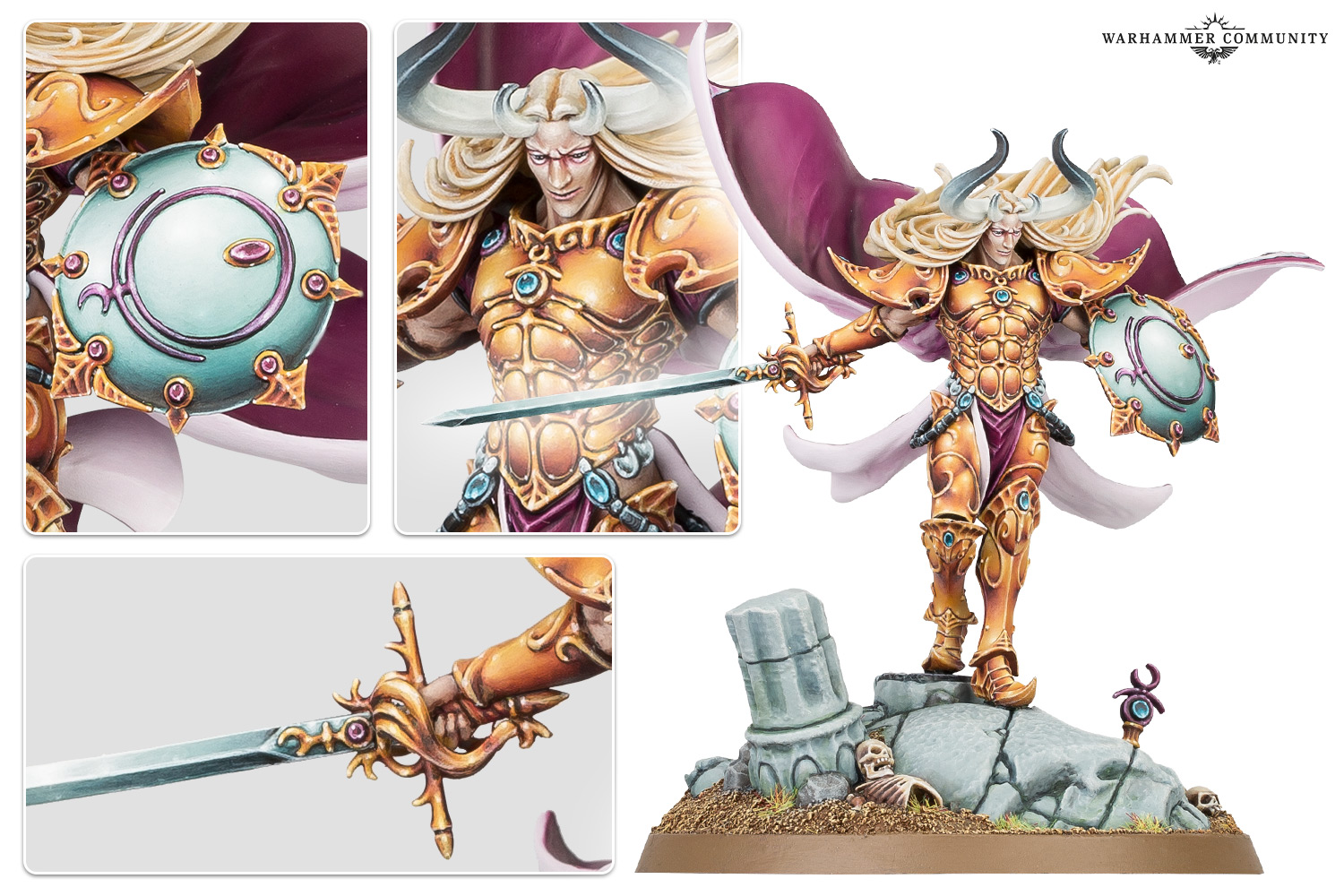 Sigvald the Magnificent was the first Warhammer novel I ever read, and I’m probably always going to have a soft spot for him (steady!) This miniature looks utterly amazing, and I absolutely love it. Some of these re-imaginings of Old World characters have been a bit… off… but I really love this new Sigvald – he’s definitely looking magnificent, don’t you think? It’s got just everything, and I really want to get this model…

And this isn’t all for Slaanesh…

We’re getting Slaanesh mortal units! The Myrmidesh Painbringers look like the kind of perfect warriors that I’ve been expecting from the Prince of Pleasure, and I think they personify that excess that the god is all about. Looks like a dual kit, as well, with these Symbaresh Twinsouls:

Where the Painbringers are perfect soldiers, the Twinsouls are just weird. Slaanesh isn’t just about sex and drugs, of course, and there is so much more to explore when it comes to the Dark Prince, I’m so glad we’re now getting to see this.

I thought we were being spoiled when we had all of that good stuff last year, with the new Keeper of Secrets at the head of the range of plastics. Now, we’re finally getting to explore the mortal side of things, and we’re seeing Sigvald at the head of his own Decadent Host! It’s a glorious time to be alive – dare I say, it’s magnificent!!

One thought on “Decadence & Decay: The Warhammer Preview!”