Hey everybody,
After a long time flirting with this game, I think I have finally taken the plunge to go all-in with the Arkham Horror LCG, and have been playing it quite a bit in recent weeks as I attempt to once more get to grips with things. Last summer, I managed to get myself through the entire Dunwich Legacy campaign, but only chronicled the start of that adventure here on the blog –  The Dunwich Horror is my favourite Lovecraft story, though, and I feel that the campaign deserves another run-through, so I’ve decided to tackle it once again, and will be coming back here regularly to talk about my plays! That is, at least, the plan! 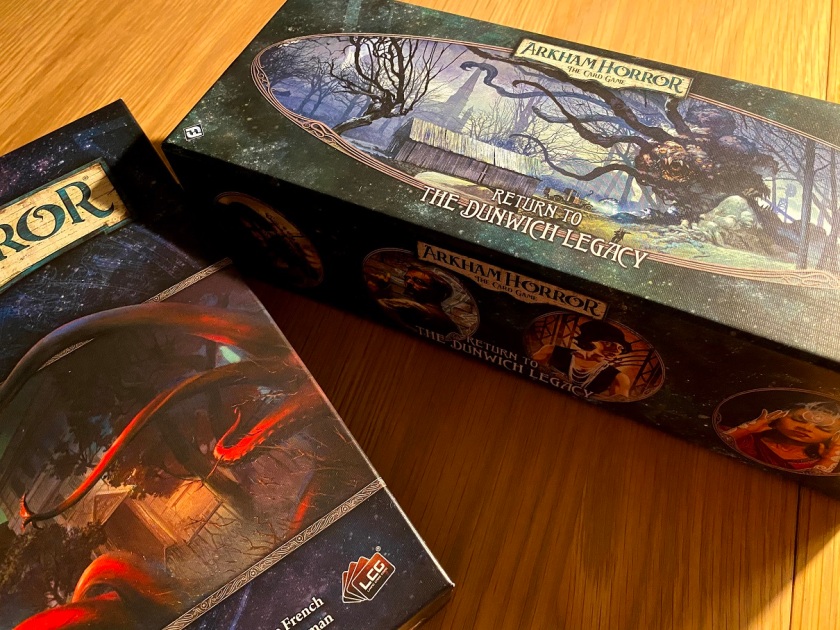 Dr Armitage is worried his colleague Professor Warren Rice, might be in trouble, so he has asked for your help in finding his friend. He seems unreasonably nervous about his colleague’s disappearance considering Professor Rice has only been “missing” for a matter of hours…

Much like last time, I’ve started with Extracurricular Activity, as we try to find out what’s been happening with Dr Armitage’s colleagues. It was a lot of fun to get into this scenario, I have to say – I’ve played The Gathering so many times, it’s a very nice change to have what I suppose is a “proper” game, as things get underway and we can see what the game has got to offer. I’d made up new decks for Roland Banks and Akachi Onyele recently, so set out with this pair and thoroughly enjoyed myself!

I’m very pleased to say that I didn’t remember the scenario all that much as I was playing it, so I wasn’t able to “game” it as I thought might be possible in these sorts of circumstances. Looking at my blog from last year, I turned out rescuing the professor, but the students didn’t make it out so well. This time, however, due to a combination of events in the encounter deck and a random path of exploration that turned up a lot of clues, I found myself in the dormitories and rescuing the students, leaving the experiment in the alchemy labs.

Interestingly, I didn’t have a great deal of enemies come out of the encounter deck, so the game did feel quite relaxed, although the treachery cards that I drew were just horrible (more in a bit!) Of course, I’m not an expert at this game yet, so I did still need to consult the rulebook at times, but I think it went quite smoothly overall! I think the worst part, for me, was a string of failed investigate checks – both investigators had an entire turn where nothing happened because all the checks were failed! 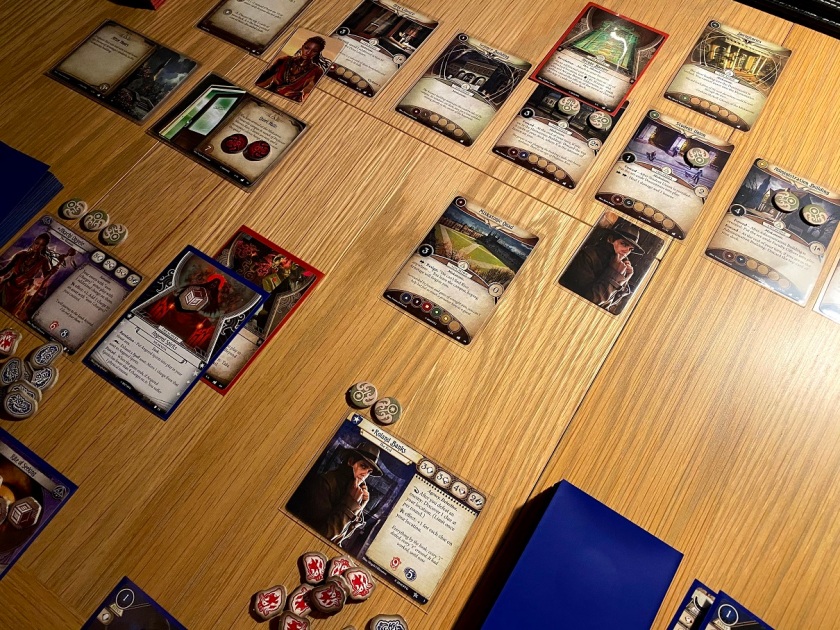 Campaign Log
So: Professor Warren was kidnapped, but the students were rescued. I managed to accrue 4 victory points, so both of my investigators have got some XP to play with, although I think I might play another scenario before I start looking to upgrade the decks.

Some thoughts
I find these decks curious to play. Akachi is built as quite a powerhouse, if I can get the right pieces of her deck into play. Something I noticed with the core set play-throughs is that she was a bit useless until the deck “comes online”, but once she was there, I kept drawing cards that felt redundant. This time, however, it was a slightly different story as I was getting some pieces that I needed, but I was also getting a lot of good stuff overall, which made it feel like she was a real player. Roland, by contrast, had some real bum draws, and wasn’t getting very far with either the investigation or combat. I drew Pushed into the Beyond for him rather a lot, also, which discarded anything useful that I managed to play! I do often find this with playing card games, that I will usually find myself just accumulating resources with nothing to spend them on – not sure if I need to give the Roland deck a tweak, but then I’m not really sure what I need to put in there!

Both signature weaknesses were drawn for the investigators, and both were overcome, which I was very pleased about.

It was a lot of fun though – stay tuned for scenario two, coming soon!

3 thoughts on “The Dunwich Legacy”