Hey everybody,
Following on from last week’s post about the Grey Knights, as I get ready for something of a major push towards finishing as many of these minis as I can by the end of the year, I’ve been thinking a lot about the list that I have and what I can do with it to field an army at the 1500-points mark, and have come up with something that I am quite excited for, so thought I’d talk about it here today!

There was quite a bit of talk in last week’s blog about the idea of the Paladin bomb, and while I have expanded the list a little with a second box of these chaps, this isn’t actually something that I’m going to be focusing on too much – principally because of the points cost for these guys! However, I have taken the opportunity of a second box to fill out the squad to five men, and have used the other bits to create a Paladin Ancient, the banner-bearer that gives nearby models +1 attack.

Having five Paladins does give me the option to equip two of them with special weapons – the wording on the datasheet in the current Codex does actually say “two”, and not “up to two”, which means that you can’t just put one in there, unfortunately. Paladins are 50 points each, and the weapons just add to that, so given that the current build of daemon hammer and two with pairs of falchions just screams melee-orientated unit, I didn’t then want to spend points on giving them ranged weapons that they wouldn’t be able to use when the unit got into combat. True, the special weapon only replaces the storm bolter, so they are still able to be equipped with melee weapons, but it’s all additional points that I’d rather spend elsewhere. I’ve gone for two additional guys with halberds, as the +1 attack for paired falchions is nice, but really, the +1 strength from the halberd should be very nice as well, so it’s a decent blend of attacks in there (especially with the daemon hammer hitting at S8!). 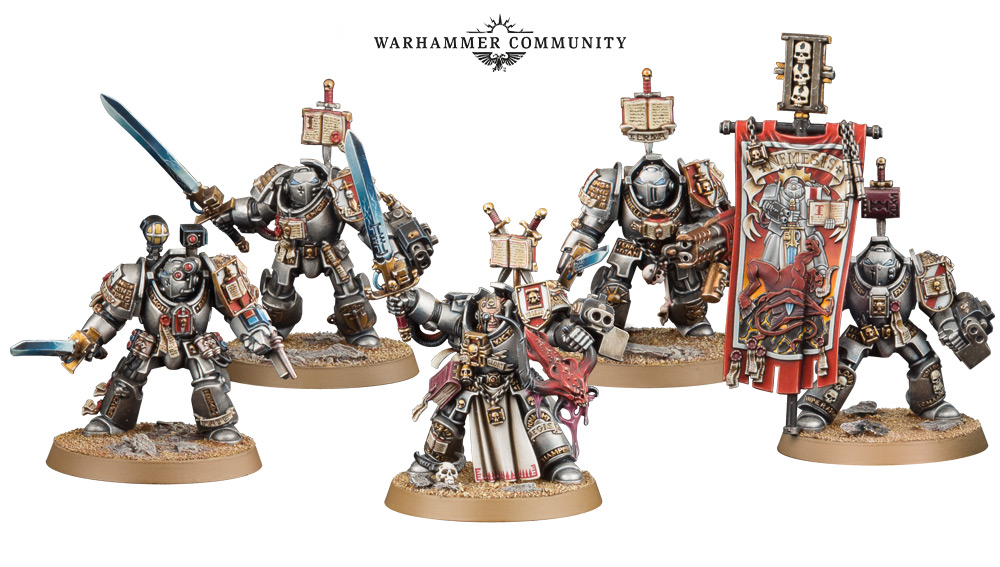 The choice of psychic powers for each unit is also really offensive. The Paladins have Purge Soul, which is almost like a leadership contest between the squad and their target. The Paragon, the sergeant for the Paladins, is Ld9, which is only one point above a marines’ sergeant, however, the important note here is that the Paladins will be running around with the Ancient in tow, giving them +1 to their Leadership value. There is potential for a couple of mortal wounds on a decent roll, here, I feel! Speaking of the Ancient, he has Inner Fire, one of the powers from the new Dominus discipline, which lets him roll a number of dice equal to the value of the psychic test for the power, and deal a mortal wound for each 3+ rolled.

Having units that can take part in every phase is a big draw for the Grey Knights, and is why I think they are so expensive as models. If all of those psychic powers come to pass, they could be doing upwards of 6 mortal wounds to a unit before they even shoot anything! Everyone has a storm bolter, of course, so within 12″ of an enemy unit that’ll be 10 shots from the Paladins and another 2 from the Ancient, hitting on 3s and likely wounding on 4s, then the juicy stuff happens when they’re in combat. Each Paladin has got 3 attacks, but the banner from the Ancient gives them +1 attack if the model is within 6″ of it – so best-case scenario, we’re looking at 20 attacks. There are two models equipped with falchions, so we’re now up to 22 attacks. The Paragon will be using his four attacks to hit on 2s with a S8 AP-4 D6 weapon (with 3 damage, minimum), which should be nice! The falchion-guys will be using their 10 attacks hitting on 3s and wounding on 4s (most likely), while the halberds will be making 8 attacks wounding (potentially) on 3s. Both the halberds and falchions are AP-2, as well, and D3 damage each.

Stratagems for the Grey Knights are not particularly fantastic, if I’m being wholly honest, but there are some useful things hidden away that can bolster the knights of Titan, and thinking about the Paladins in particular, there is help to keep them alive by reducing damage dealt from ranged attacks (for 1CP), once they’re in combat there’s a stratagem to give them +1 to hit rolls (for 1CP), you can keep any Paladins on the battlefield until they have had a chance to fight back (for 2CP), and the classic Honour the Chapter will allow the unit to fight again (for 3CP).

Some really interesting options in there, I feel – and all of this is just through the use of those six models. The Chaplain’s litanies, and the Grand Master’s Rites of Battle ability, can allow them to re-roll hit rolls, should those characters be nearby as well. It is difficult to get the kind of crazy aura shenanigans of some armies with the Grey Knights, for sure, but I do like the fact that you can still get some really interesting stuff going on for them.

As a bit of a footnote for this, Paladin squads have the Combat Squads ability, meaning that you can take a unit of 10 models and, before the battle, split them up into two units of five models. Given the fact that you can take two special weapons for every five models, this allows you to break up a squad into melee-orientated and shooting-orientated. However, the points investment for this kind of squad is ridiculous – almost 600 points for the ten-man unit. It’s definitely cheaper to take a Purgation squad if you want ranged firepower in the list, as the weapons alone cost cheaper when equipped to a non-terminator model. Sure, you get the terminator stat-line on the Paladins, but the weapons aren’t any more accurate when equipped to the bigger guys, so while this option did at first intrigue me, I don’t think I’m going to be rushing to build four psilencer-wielding Paladins anytime soon!