Inside abandoned hospitals, secret laboratories, and forgotten cellars, scientists are conducting depraved experiments that will drag humanity to the brink of the abyss. Only a small group of investigators can discover the truth and put an end to these mad plots before it’s too late…

The first expansion for Mansions of Madness, Forbidden Alchemy, delves into the sort of laboratory horror that filters through some of HP Lovecraft’s short stories, as we look at the strange goings-on in the private laboratories of crazed scientists. It’s been three years since I looked at the base game on this blog, and even though a lot has happened in that time, including a second edition of the game and me selling off my own copy of the first edition. But I still want to get round to exploring the expansions here, almost as a retrospective or comparative, looking at how things have been implemented across the variety of Lovecraft games in the stable!

Forbidden Alchemy is the type of small-box expansion for the game that gives us very much more of the same. We get some new investigators, again some classics from the Arkham Horror stable, and classic monsters like the Byakhee. There is, of course, the over-arching theme of mad scientists and the like, but in the main the expansion is fairly straightforward, if I’m honest. I always find it quite curious when talking about expansions like these – they’re the sort of expansion that I appreciate, because sometimes when I like a game, I just want more of the same. Sometimes an expansion for a game will greatly change the base game, almost to the point where you wonder if you’re playing the same thing, and while that can be nice to change things up a bit, sometimes you just want a new hero to try out, or whatever. 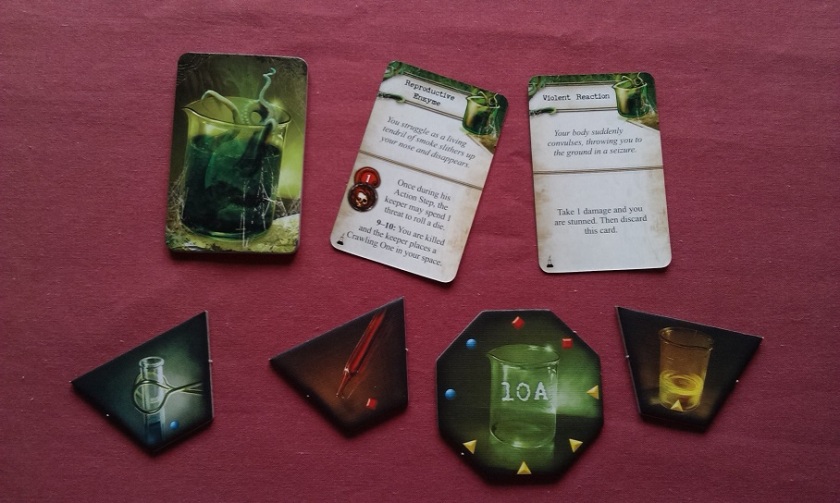 There are new puzzles in this box, themed of course around Alchemy, although these do change things up from the base game’s puzzles in that you don’t have the same kind of correlation between the investigator’s intellect and what they’re trying to do, but instead it’s all a bit random. Very thematic for the expansion, but I don’t think they’re necessarily better than the earlier puzzles.

The expansion is wonderful, though, for the scenarios it includes, featuring none other than Herbert West and his foul experiments! Crawling hands trying to grab the investigators when they least expect it… nice! 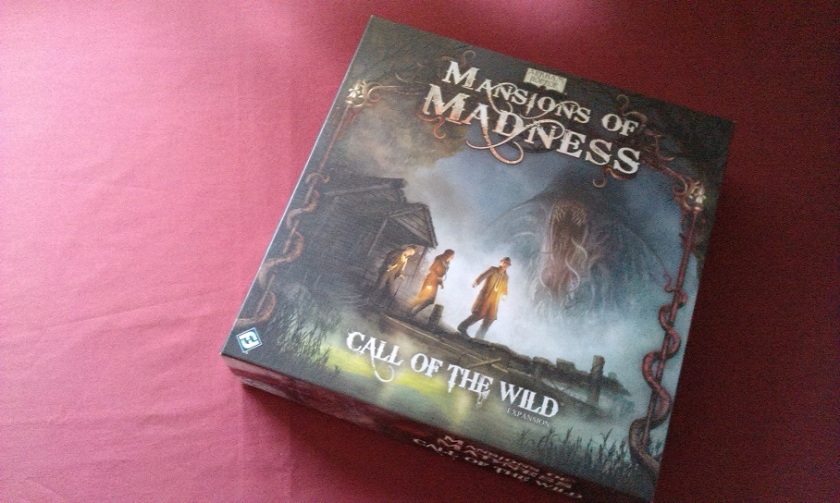 Call of the Wild was the big box expansion for the game, which featured a slew of new components for the game, and was themed somewhat around the Dunwich Horror. We go outside of the mansion this time around, and have scenarios that actually involve that forsaken hill where the Horror was banished. 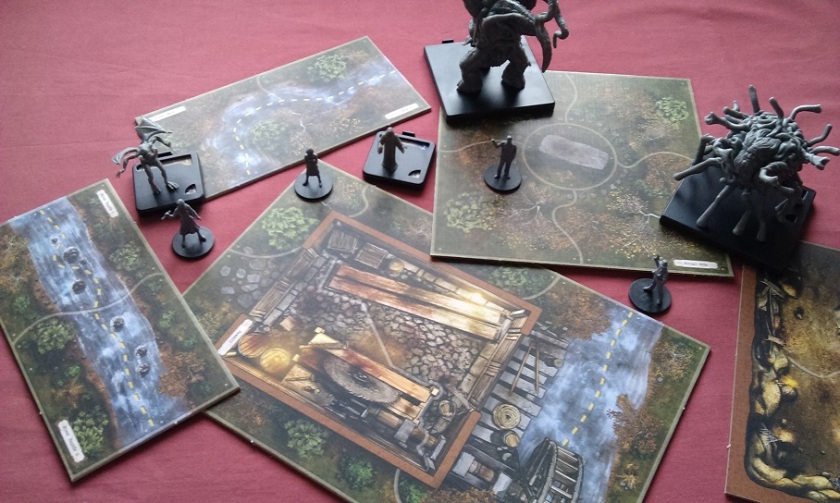 This expansion literally blows the game wide open, not only simply by virtue of being outside, but a lot of the structure of Mansions of Madness has gone, but in a good way. You’re not forced to follow a specific chain of clues to reach the objective, but rather can gather clues with almost total freedom. This sea-change necessarily means that the stacking of Objectives has also been replaced with a more flexible kind of end game in sight, and it’s really quite something!

There is a scenario that is a sort of whodunnit, where you can question townsfolk and gain them as allies as you try to discover a cult leader; there is a scenario where the investigators are trying to hide ritual pieces that the keeper is trying to discover, in order to enact a pre-chosen ritual. There’s a weird sort of dungeon-crawl type of scenario where you’re trying to escape a misty forest, and you build the map as you go. 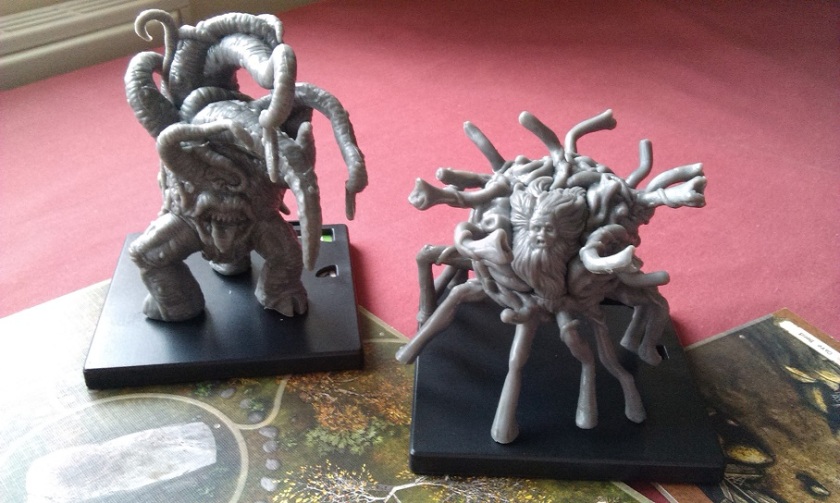 We also have the Dunwich Horror itself, in a scenario that sees the keeper trying to summon it, and the investigators trying to complete tasks set for them by Zebulon Whateley in order to foil these summoning efforts.

It’s really everything you’d expect from a big-box expansion, though. The altered gameplay that comes from being outside and not having to complete the clues in strict order, along with a raft of stuff that, some of it being highly themed to the new set, but still can be added in to the base game if you so wish.

Mansions of Madness is one of the great Ameritrash games where the theme is prioritised over everything else, although of course this game doesn’t just paste a theme onto some random basic game engine. There is so much going on in any game that it can make for a really immersive experience. The expansions are very nice additions, although Forbidden Alchemy did have a lot of trouble when it first came out, requiring the inclusion of a set of cards to replace “broken” components of the game. That did make for a very confusing box opening, I must say!

What I find quite interesting about this game is how it chooses to implement the mythos side of things. Call of the Wild is nothing like Dunwich Horror for Arkham Horror, or The Dunwich Legacy cycle for the LCG. It’s probably closest to the latter, in that both games take aspects from the source material and re-imagine them, but MoM has an extremely tenuous link to the Lovecraft tale, while at least the LCG tells a fairly compelling tale set in the aftermath of the story itself.

Forbidden Alchemy has no real antecedent in the other mythos games, of course, although it does scratch a very nice itch from the source material. Lovecraft himself was very interested in modern science, and I think if he had had the money, would absolutely have been one of those gentlemen scientists with a private lab in the basement. Quite a few of his stories include some form of science, with tales like Herbert West – Reanimator and Cool Air having almost the main focus of the story being on pushing the limits of scientific discovery. It’s definitely a lot of fun to see that given some attention within FFG’s stable of Lovecraft-themed games, in my view!

Mansions of Madness is now in its second edition, where the keeper has been replaced with an app, allowing for a fully-cooperative game experience. I’ve not really looking all that closely at the second edition, having pretty much downsized my collection when I moved house last year to a core of games that I regularly played, and the Cthulhu-themed games were pretty heavily hit. To all appearances, though, MoM2 is going well, with the most recent expansion, Path of the Serpent, being released twelve months ago. With five expansions that all look to be somewhat along the lines of big box entries, it definitely seems to be doing well for itself!