Hey everybody!
We’re inching ever closer to 9th edition Warhammer 40k now, and somewhat in spite of myself I’m getting a bit excited for it all. While in some ways we’re almost there already, with the rules and FAQs having been published already and the points leaked this last week, I still thought I’d share these plans now as a sort of preface to playing in the new edition.

While I’m planning for Genestealer Cults to become my main new project for the new edition, I’ve got a couple of other projects that I want to get some headway with, which is quite exciting! My aim was to get around 500 points of miniatures painted up, to go alongside this new Crusade idea that we’ve been seeing a lot of this week.

Let’s start with the Heretic Astartes! 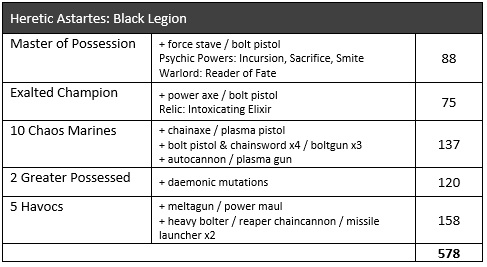 I’ve put together this small force based around the Shadowspear box that came out last year, having wanted to get these models painted up initially as Word Bearers.

At long last, I've finished the test mini for my planned #WordBearers force, adding a few highlights here and there. He's looking quite good, I think, so now I just need to think about how I can crack on with that scheme across the heretic side of #Shadowspear 🙃 #Warhammer40k #ChaosSpaceMarines #HereticAstartes #Lorgar #Chaos #newProject #newArmy #paintingWarhammer #GamesWorkshop

Since reading ADB’s Black Legion series this year, however, I’ve changed my mind completely, and have gone instead for the Black Legion as my heretics of choice. Of course, I haven’t really gotten all that far, having started with the Helbrute earlier this year (though I still haven’t finished him off yet!)

My aim with this was predominantly just to get started with the Legion, and get a decent force that may well be able to be used with this Crusade format. I’ve got another box of Chaos Marines that I’m planning to move on to following this, using them to fill out the Shadowspear stuff so that I have a full squad of chainsword guys and another with boltguns, and then I’m considering painting up the Cultists that I’ve had on the go for far too long!

I’m not 100% sure anymore how the Blackstone Fortress minis work with the regular stuff, so I’m thinking I might wait for the full 9th reveal before trying to incorporate things like the Rogue Psyker in the above picture. Hopefully there will be a way of getting these interesting bits into the army – although I’m still keeping my fingers crossed for now that we might well get a Renegades and Heretics Codex out of the new edition, so we’ll see what happens there!

I’m determined not to go crazy with Chaos (ha ha), but I’m looking forward to having a proper army painted up here!

Let’s turn our gaze from the empyrean now, however, and focus on the light of the Emperor – it’s time for the Adepta Sororitas!

I was very excited to get my hands on the battle box at Christmas last year, and set about building them all up – though that was pretty much where it ended, really. I think around the same time as the multi-part kits were being released, I’d hit my hobby slump, and 40k took something of a step back for me, as I thought staying away from the hobby for a while might help to reignite the passion! Well, I got there in the end, I suppose!

Some real #hobbyprogress has been made with the #SistersOfBattle these last few weeks! I think I've got a colour scheme sorted now, so I just need to get my act together, and start painting!! #Warhammer40k #AdeptaSororitas #SaintCelestine #PenitentEngine #ArcoFlagellants #SistersRepentia #GamesWorkshop #Citadel #miniatures #hobby #buildingWarhammer #awesome

The core of this list, then, is the battle box stuff, supplemented with a box of Retributors, and five Dominions (built from the same box as the multi-part Sisters themselves). I had originally picked a colour scheme that harkened back to the Deathwing, as Sisters and Dark Angels have something of a similar iconography with all the faux-Catholic stuff going on, and I had begun to move away from wanting a Dark Angel army but still love the colour scheme of bone with greens and pinks.

Thought I'd do some painting last night, as a tester for my #SistersOfBattle – well, I'm unimpressed with my lack of skills 😔 Could this be the end? #hyperbole #Warhammer40k #GamesWorkshop #AdeptaSororitas

I was excited for this scheme, but the execution did leave something to be desired! Sisters went firmly on the back burner for me, and it wasn’t until I started to consider selling off chunks of my collection, that I began to re-think keeping them, after all!

I’ve gone for the Order of the Sacred Rose, which is a white-and-black scheme, so that should be difficult! However, I thought I’d try it with the Contrast paints, and so far have been quite unimpressed. As such, I’ve been trying to paint them the more traditional method, so far with minimal results as I haven’t found much time, of course!

Similarly with the Black Legion, I’m not planning to go all that wide with the Sisters, although I have found myself with quite a bundle of plastic since the new year, so maybe that will be inevitable?! As it stands, I don’t think I need to buy anything more for the army for the rest of the year! 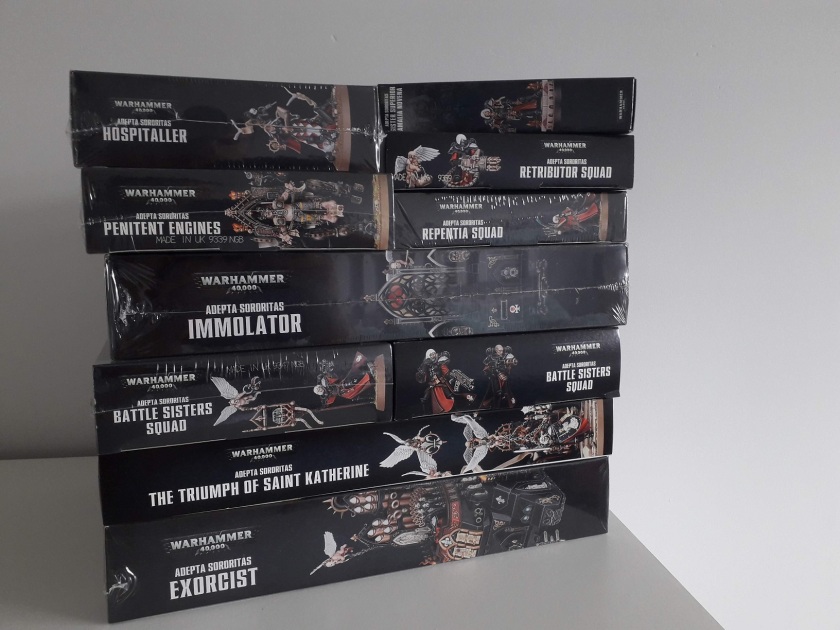 With both of these army lists, my intent has been to get a decent start on each of the forces, getting some characters and some troops painted up, along with a few more interesting bits. Basically, I suppose I’m trying to put together an interesting line up that will be fun to paint as time moves on. The armies are never going to be competitive, I’m fairly sure of that, but I’m looking forward to seeing how far I get. Interestingly, both the Chaos and Sisters forces have a squad of troops, a squad of heavy weapons, and at least one hero-character to lead them… though they don’t feel in any way balanced against each other!

I’m always keen to see how far I’ve gone, so I think over the weekend I’ll try to get some photos taken of the models as they stand right now. Then it might be fun to see how far I’ve come at the end of the year, when I get them together once more and see whether, in fact, I’ve made any progress at all! There’s always the risk of something distracting me, after all – especially with the new Necrons on the horizon!!

I’m really quite excited for these two projects, as they should sit quite nicely alongside my Genestealer Cults force. Of course, I’ve found myself with three of the most detailed model ranges out there, so I’m not entirely sure how much progress I’m going to make, but I’m hoping that, by the end of the year, progress will nevertheless have been made!

All of this sort of supersedes the Hobby Resolutions, then, I suppose, though it’ll be interesting to see at my New Year check-in just how far I’ve managed to get with, well, all of this, really! Stay tuned, as ever, for more exciting updates!

3 thoughts on “Getting ready for 9th”