Hey everybody!
I had what is most likely going to be my last game of 8th Edition 40k yesterday, though I didn’t let that stop me from trying out yet another new army!

I’d drawn up a list of Genestealer Cults, mainly the units that I’d already had built up over the last few years… 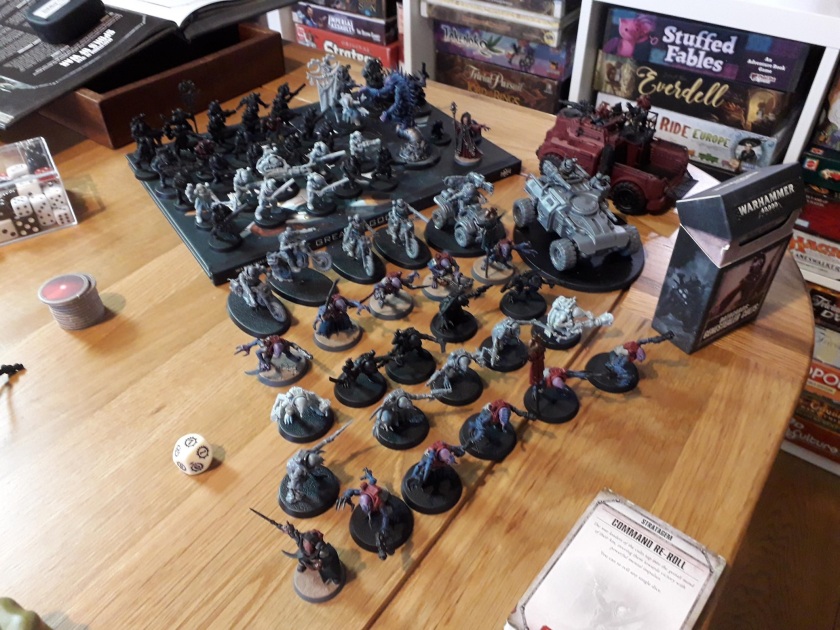 A double battalion with 13 command points available, and yet I manage to finish the game with 11 of the buggers left to me! Of course, I was using the Nexos to regain a couple of them over the course of the game, but even so! 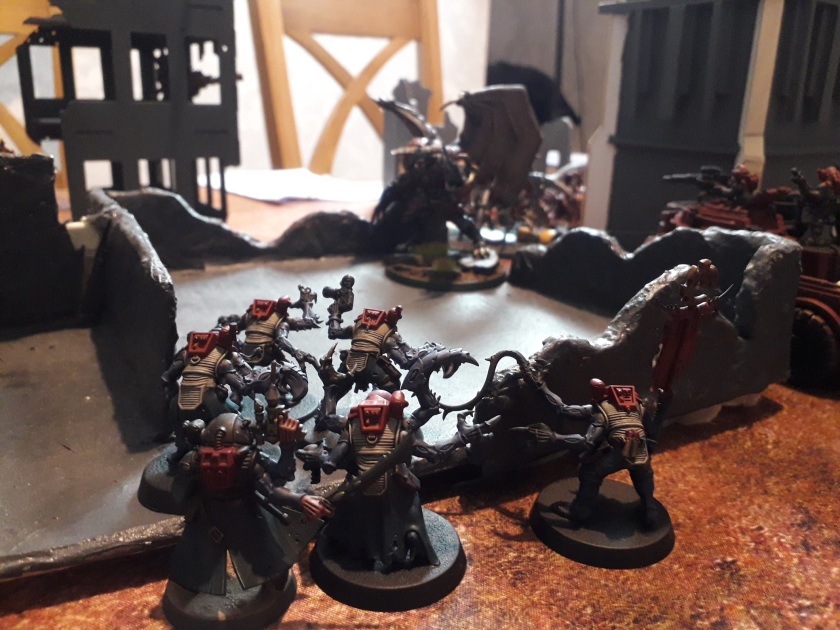 I really enjoyed this game, seeing how the Cult works and so forth. I had a blast with the various rules and seeing what I could do with the units that I have on offer!

The Genestealer Cults models are some of the most beautiful models in the game, in my opinion, and while I do like the models that we’ve had out for some time now, I was looking forward to trying out some of the new units as well! The Clamavus-Primus-Nexos trick of gaining command points back seemed like it would be glorious, but it actually didn’t seem to be worth bringing them all along just for that. I think I gained two back over the course of two rounds, so it wasn’t really worth having the Nexos and Clamavus both on the table. The latter did actually help prevent an Obliterator landing square in my backfield (instead, he came in on the corner, and only succeeded in wiping off half a squad of Acolytes).

The Primus was decent though, and he is a serious buff for Cult models, so I think he’ll be staying in the list.

I’m a big fan of this chap though, the Achilles Ridgerunner. With two heavy stubbers, and that heavy mining laser on top, it was pretty damn useful during the game, killing off the Daemon Prince to net me Slay the Warlord. I was really quite surprised at the punch of the laser! In all honesty, I don’t think I used it to the full potential – I don’t even think that I moved it during the game! – so I’d like to work again on what I would do with that in future games.

Man of the match, though, has got to be the Patriarch. Which I suppose is only fitting, really. When everything seemed to be looking quite dire for me, the Patriarch stepped up to the plate and used Mind Control on the Venomcrawler there to remove the Dark Apostle, before then utterly shredding his way through the Venomcrawler in a single round of close combat. I feel that he certainly helped me go out with a bang, anyway!

However, I did indeed lose, and quite badly, as well – I think the final score was 9-6, but when we’d been looking through the potential third round, it would have only gotten worse, so we called it there.

One of the main downsides for the army is just how squishy they are. With T3 almost across the board, vast swathes of my army were being chewed up. In contrast, I wasn’t really doing a great deal to fight back, despite the massed fire from Neophytes seeing a lot of dice rolled… I think I was averaging 3 successful wound rolls from 14 hits (though of course, several were then saved).

As much as they fold like wet paper bags, I’m thinking about maybe taking bigger blobs of Neophyte Hybrids, to allow for greater sticking power. Of course, their weapons still leave a bit to be desired, but I’m hoping that I can get some results just from the weight of numbers! We shall see. 9th edition seems to be losing the requirement for multiple detachments, so I suppose I could afford to then take my troops in bigger squads rather than the minimum squads that I have at the moment.

I’m very excited for these gribblies, as I really want to get better with the army over time. In particular, I’d like to get a better handle on the stratagems available to me. For sure, a lot of them were to do with playing around with the Cult Ambush rules, which I wasn’t entirely sure about before I began. Having no real plan, I think this showed most with my deployment, as a lot of things ended up in the middle of no-man’s land.

We were playing at 1230 points, although I do think it might have been better to have started with a smaller game to get the feel for it. Again, 9th edition might help me here, as I can potentially try smaller games to start with, as I get to grips with the army.

Been trying to come up with a list for these gents for a while now, and in 1500 points I've got a total of 78 models (of which I have 17 painted). I don't know how horde army players cope! #Warhammer40k #GenestealerCults #BladedCog #CultOfTheBladedCog #AcolyteHybrids #NeophyteHybrids #Primus #Magus #Genestealer #GamesWorkshop

For a long time now, I’ve been trying to paint the army up but it’s been a slow process due to the level of detail on the models. I’m thinking I’m going to try and focus on getting the equivalent of the Start Collecting box painted up, especially as I want to show some love to the Ridgerunner after such a good performance!

Regardless of the inaugural outing with the Cult being a washout, I am still really excited for the army as my new force for 9th edition! I’ve played a lot of Necrons and a lot of Dark Eldar during my time with 8th, but I think it was nice to say goodbye to the edition with my new army 🙂

One thought on “Goodbye to 8th Edition”