Hey everybody!
So with the news of the new edition coming out this summer, I’ve been going through my vast collection of 40k miniatures, and seeing what I can get rid of, trying to thin out the ranks as we start anew. In doing so, however, I’ve decided to finally make a proper go of things with my Genestealer Cult! I’ve been here before, of course, but I’m currently feeling really positive about this new project, so decided to announce things here, and go through it with regular updates as I proceed! 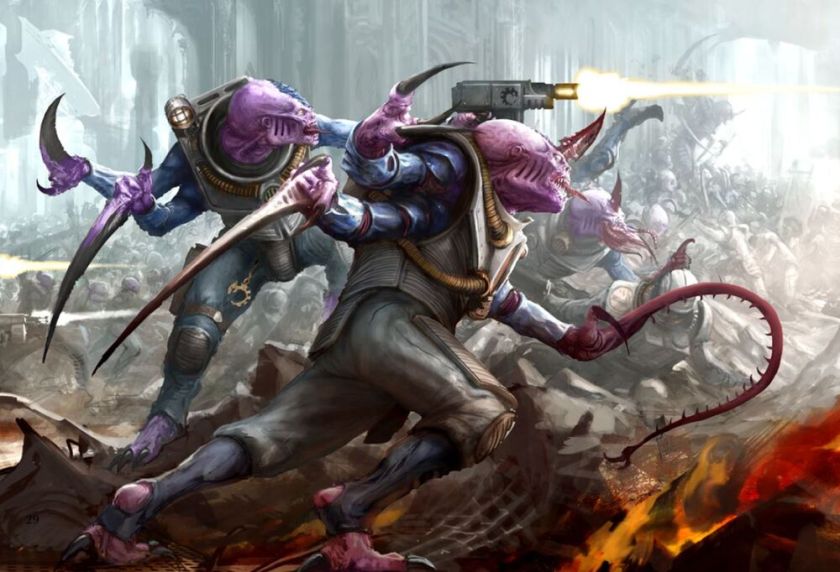 As always with these things, I’m building a list by starting with a unit from the codex, and seeing what I can do to build out from there. I’m starting with the Hybrid Metamorphs, a unit that I’ve always liked the sound of, and had originally built up two years ago for Kill Team. The Hybrids are those cultists who have begun to mutate with more Tyranid bioforms than the usual Acolytes and Neophytes, and are seen as particularly blessed by their fellows. These saint-like creatures are usually deployed very near to the day of ascension, in time to wreak havoc among the planet that has been chosen for the Tyranid invasion.

In the game, these chaps are quite the blender, pretty wholly close combat-orientated, with three attacks base (and four for the Leader). I’ve always found their upgrades quite confusing, as they are swapped out in pairs – talons and claws for whips and claws, or talons and claws for bigger claws… The Metamorph talon gives the bearer one additional attack, which is always nice, as keeping the squad at their basic load-out gives them 21 attacks. However, two of mine have traded their talons for Metamorph claws, so I’m doing myself out of 2 attacks. Sad face.

But things can get really interesting when you start pairing these guys up with stratagems, psychic powers, and the like. Let’s start with the Primus. This guy has got four attacks of his own, but gives +1 to the hit rolls of friendly <cult> models within 6″ in the fight phase. Now, the Metamorph talon allows you to add 1 to hit rolls as well, but a natural 1 will always fail, so let’s put this to the side for now. So my Metamorphs are making 19 attacks, and they’re hitting on 2s. I’ve got a cult icon with my squad, as well, which allows me to re-roll any hit rolls of 1. Nice!

Now, they’re only S4, for sure, but there are two guys in the squad with Metamorph claws, those massive crab things which are S+2. So there are 19 attacks, six of which are S6. Nice!

Without trying to get too far ahead of myself here, I want to include a Patriarch in my list, so he will have to be the warlord. However, I’m planning to spend a command point before the battle for the Broodcoven stratagem, allowing me to pick warlord traits for the Magus and Primus in the list as well. For my Primus, I’m taking the Biomorph Adaptation for +1 strength and +1 attacks. So the Primus is making 5 attacks of his own, hitting on 2s, and his attacks are at S5. Handy!

Let’s leave the Primus for a moment, and turn to the Magus. His sole use here is as a Psychic powerhouse – he knows 2 powers from the Broodmind discipline, but can only attempt to cast one per turn. I’m giving him Might from Beyond, which gives +1 to strength and attacks of units within 18″, and then Psychic Stimulus, which allows units to charge even if they have advanced, and also fight first in the fight phase. For one command point, I can use the Cult’s Psyche stratagem to attempt a second psychic power in my turn. I’m up to 2 CP used now, but my Hybrid Metamorphs are now making 24 attacks, eight at S7 with sixteen at S5.

But I’m not done yet!

In The Greater Good, there is a Hybrid Metamorph-specific stratagem for 1 command point, Violence Unleashed, which gives the unit +1 attack. What’s that, 29 attacks? I’ll take that, thank you very much!

I’m running my army as Cult of the Bladed Cog, whose unique strategem (1 command point) gives exploding hits on 6s. How nice! So that’s a total of four command points used, and I’m sort of banking on two psychic powers going off – the two powers have a warp charge value of 7 and 6, respectively, so I’d hope that it would work out, but I could potentially take a Familiar with the Magus to allow me a third bite at the (psychic) cherry.

I have no real head for probability calculations, so have used a dice roller to give it a try, and rolled an average of six 6s. Now, if you remember that I’m hitting on 2s and re-rolling 1s, so I’m going to be hitting on a lot of these attacks! Assuming that 32 attacks will hit, against T4 models, I’m going to be getting roughly 20 wounds in. My favourite tactic of drowning a unit in saving throws might well work out here!

On top of this, of course, we’ll have the Primus in close proximity, probably making his own five attacks. Interesting…

Hybrid Metamorphs WIP! Always loved these beautiful mutants, so I've been doing a spot of mathhammer to see what I can do. For 209 points, and 4 command points, I can do 29 attacks in the fight phase, ten at S7 and 19 at S5, hitting on 2s and rerolling 1s to wound? With exploding 6s? And always fighting first? 🤔😯 #Warhammer40k #GenestealerCults #HybridMetamorphs #GamesWorkshop #Citadel #miniatures #hobby #paintingProgress #isolationhammer #mathhammer #strategy

Of course, this is all fairly theoretical stuff, but it’s always nice to see what sort of things you can do with a unit like this. For info, my Metamorph – Primus – Magus combo costs 209 points (I did think about throwing in a Clamavus for an extra 55 points, to give +1 to advance and charge rolls, helping them get closer, but I’m thinking now that I’d prefer to throw them into a transport to ensure they get to combat unscathed), but I’m now considering making a max-unit of 10 Metamorphs, which would be purely with talons to get that 20 attacks base (30 attacks with all the buffs, which generated an average of three 6s for a potential +33 attacks in the unit, hitting on 2s and wounding MEQ on 3s).

Who knows how 9th Edition will change this up? Genestealer Cults were one of the last codexes published for 8th Edition, of course, so my guess is that they will be hanging around in this form for some time to come.

I’m going to be looking at using some Aberrants, and I am for sure going to be investigating the new Atalan Jackals, as they are some very cool models. I have two boxes of them, so it’ll be fun to see what I can come up with there! I think I’m going to do these sort of update-style blogs as I decide on the pieces of the list, rather than going through a massive run-down once I’ve got the whole thing decided (as I have done for Necrons before!)

So Genestealer Cults will be my 9th Edition army, although Necrons and Drukhari will definitely see play, and I hope that I can continue to paint my Grey Knights, and get started properly with the Sisters. Those are my current plans, but who knows if the AdMech or Black Legion, or any other project will get in the way?!

Thanks for reading, and check back soon for more musings on our four-armed saviours!

5 thoughts on “Genestealer Cults: A New Army for 9th Edition”