Hey everybody,
So it’s been a while since the fourth book in the Psychic Awakening series was released, but I’m only now trying to catch up with these things, so hopefully there will be something of a flurry of blog posts in the next few weeks as I make every effort to see what’s been going on over the last few months! As it happens, the global lockdown has meant this catch-up is a lot easier, as the releases coming out of Nottingham have stopped – otherwise, I’m sure it would be months before I could have properly caught up with things!

The Greater Good focuses on three factions – the T’au, the Astra Militarum, and the Genestealer Cults. Let’s first of all take a look at the crunch in this book, which is a little bit disappointing if I’m being perfectly honest…

The T’au get the lion’s share here. While previous books in the series came with a single model release, The Greater Good technically had quite a few. We saw a Start Collecting box for the Genestealers, as well as the new Kelermorph model that was previously only available via a Kill Team set, and we had Shadowsun released in a new plastic sculpt. I’ve moved away from the T’au Empire, having sold all of my models off last year, but I still think this new model looks amazing, and would have for sure picked her up if I had been collecting those models still. 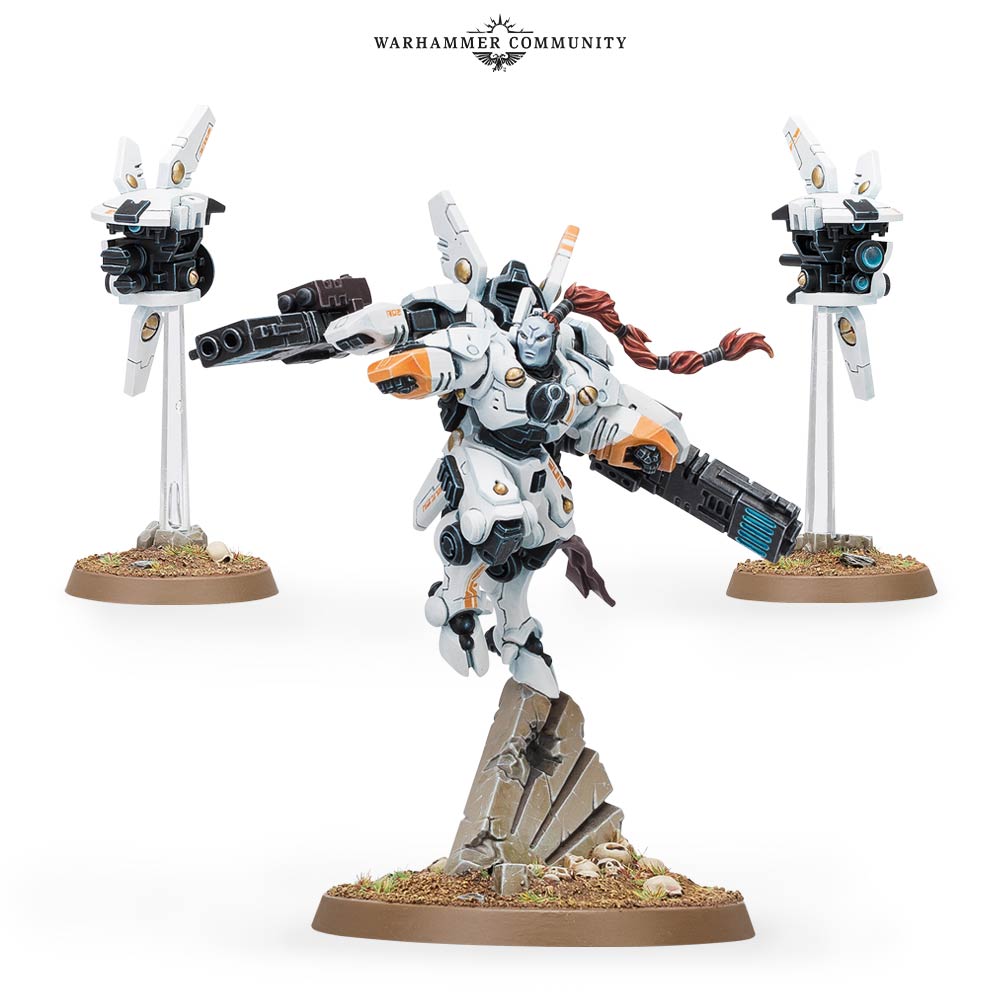 The new T’au rules therefore have an entire page devoted to the new Shadowsun’s datasheet – she is clearly a busy girl these days! They also have the standard name generator, and new Sept Tenets that you can use in place of those provided in the Codex. There are also new relics and stratagems rounding out the mix, which follow the now-established routine for these books by providing more model-specific stratagems – for instance, there are quite a few Kroot-specific stratagems, as well as one for the Firesight Marksman, etc. Interestingly, we then get the supplement for The Eight, Commander Farsight and his buddies that was originally printed back in Chapter Approved 2018. I guess they wanted this supplement to remain viable, much like that for the Ynnari that had appeared previously in a White Dwarf. I don’t recall if the CA2018 supplement had full rules for the Enclaves, including warlord traits and stratagems, but we get the full mini-dex treatment here, which is nice!

Astra Militarum are next up, and while they don’t have as many pages devoted to them, they still get the usual name generator, new stratagems, new Regimental Doctrines, and a couple of pages of Tank Aces which are a little like warlord traits but for tanks – you can choose one of them instead of a warlord trait, and there is a stratagem that can give you access to them if you choose to keep the warlord trait (or want a second Ace in the army!) 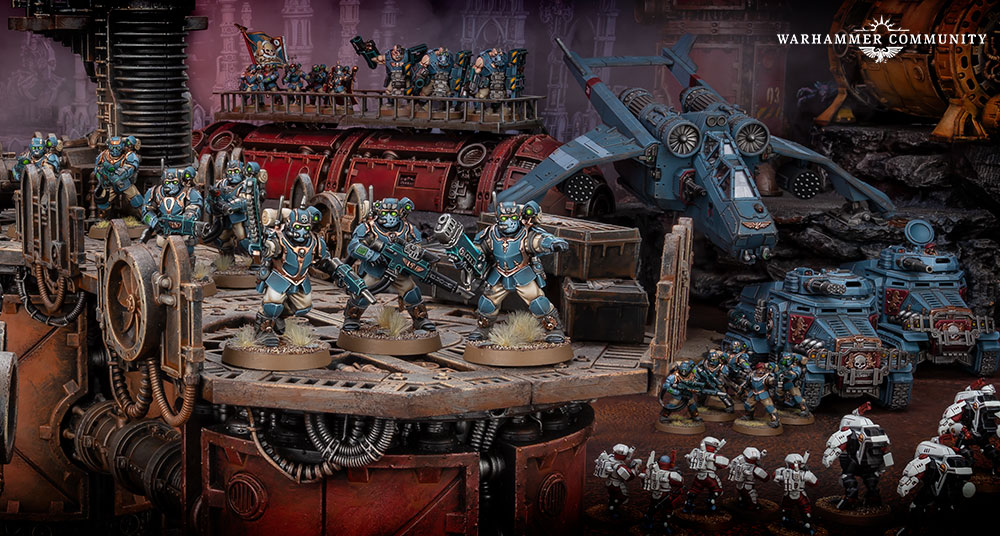 There is then something that I didn’t see coming – a mini-dex for the Militarum Tempestus! Back in 6th edition, these guys had their own book, but obviously they have since been enveloped into the wider Astra Militarum, with the result that the rules can sometimes be a bit clunky. Well, they’re still a bit clunky now, but at least we get more rules for this small sub-set of the army, which I think it really pretty cool! There are six different Militarum Tempestus Regimental Doctrines that you can choose, instead of the Storm Troopers doctrine from the main book, as well as relics and warlord traits, and two pages of Tempestus-specific stratagems! It’s a really nice addition, and I’m really pleased to see them doing this!

Finally, though, we come to the Genestealer Cults, who have the least new stuff. Sure, we get the expanded rules for Cult Creeds, allowing for us to pick our own rather than stick with those from the Codex, and we get more Stratagems and Creed-specific psychic powers (not forgetting, of course, the name generator!) But there are almost two pages devoted to errata for the Cult Ambush and Brood Brothers rules, and that’s that. I suppose it’s kinda nice to have this in a book, and not have to also carry around a printed FAQ, but even so. It definitely feels like Genestealer Cults get the short end of the stick on this one. But I suppose the Codex is fairly new in comparison to the other factions in the book, so they have the least to be added… maybe… 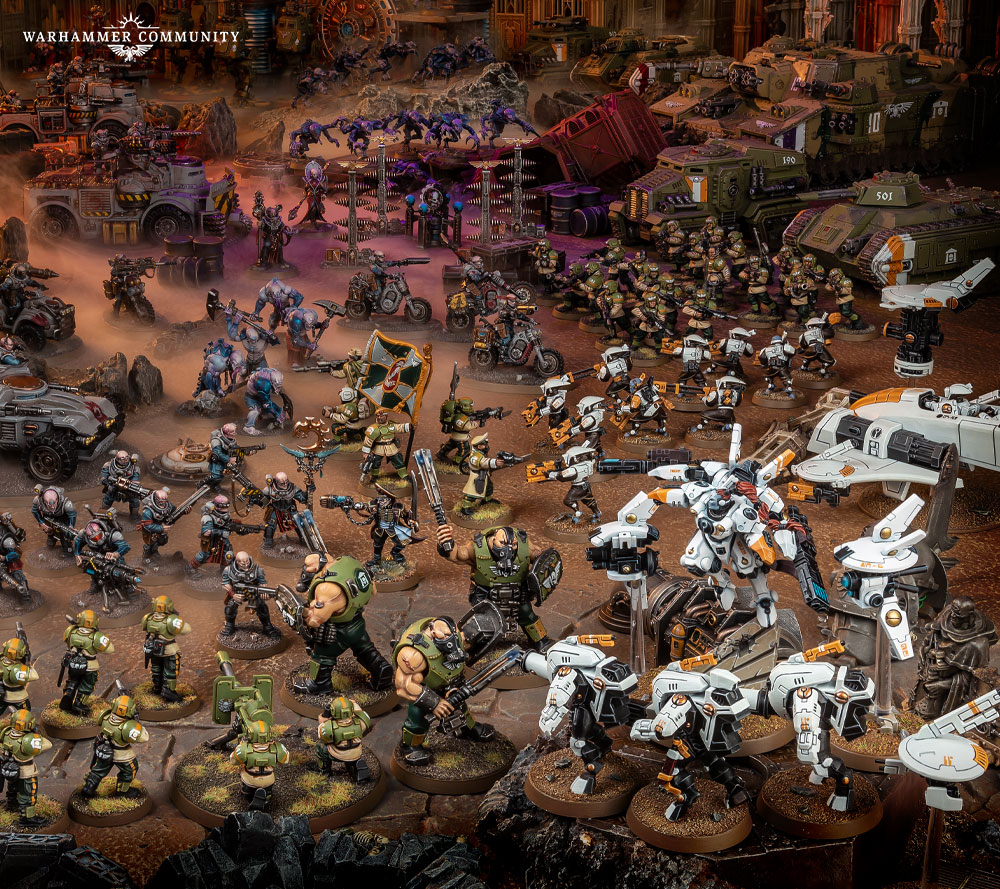 The lore is an interesting update to that presented in the T’au Codex, as we learn more about the ill-fated Fourth Sphere expansion. There are some interesting details about battles with the Death Guard, and we get some info on a Cult uprising led by the Pauper Princes. The atmosphere of some of these stories is quite claustrophobic, which is echoed in the mission included in the book, which includes Theatres of War rules, aptly named “Cavern Warfare”.

All in all, it’s a nice book, and I do enjoy seeing the various updates that they’re providing for the various factions throughout this series. I guess, being a Cult collector, I’d have liked to have seen more for them! 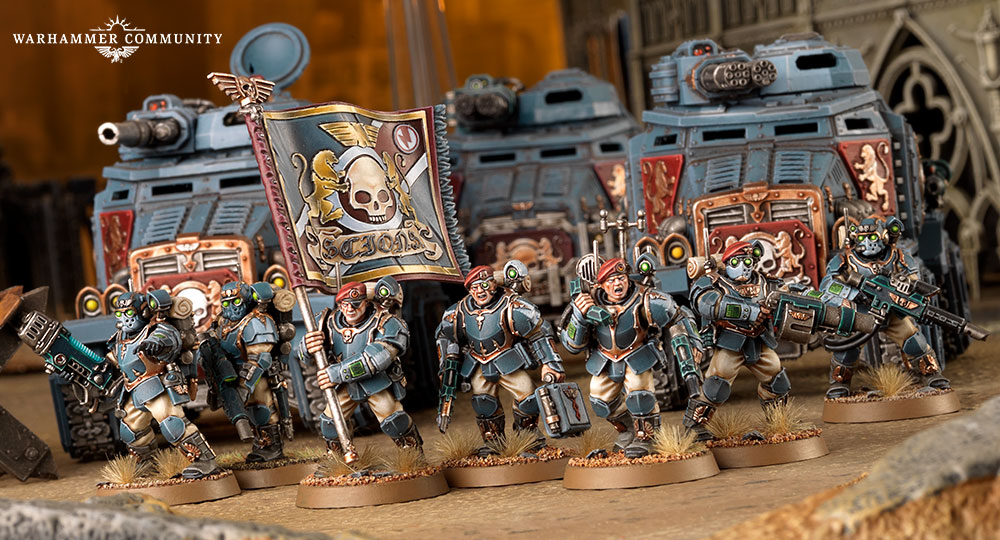 However, I thought I’d take the opportunity in today’s blog to talk more about the project I mentioned briefly in my last blog – the resurrection of my Tempestus Scions army! This is a project that goes back years, and I had started to make some progress with it at the start of 8th edition, where I planned an army split roughly 50/50 with Scions and Skitarii. Well, things have moved on a little now, and I’m thinking of something a little different.

This list has a core of Tempestus Scions, but adds on a bit of the more weird and wonderful aspects of the Imperium, without (I think) breaking the battle-forged rules. I’ve decided to use the plastic Commissar as just the regular elite choice, and have the finecast Lord Commissar for the HQ choice. Doing so, along with the Bullgryns and Command Squad, I’ve got a separate Vanguard detachment for the additional command points. I do plan to build out the Scion squads to 10-man squads each, which may involve reducing them from 4 to 3 squads in total. Not decided yet. I also need to buy the parts for the second Tempestor Prime, though that might be dropped anyway.

My plans for the list had always been to see wave after wave of orders being transmitted across the table, though I’m not 100% sure it will work as I see it in my mind! I guess time will tell on that one!

As well as using the psyker model from Blackstone Fortress, the list will allow me to resurrect another long-dormant project in the shape of these girls – looking forward to getting them painted up at last!

Another one of those ancient projects that I think it might be time to make some progress with at last! #Warhammer40k #AdeptusAstraTelepathica #AnathemaPsykana #SistersOfSilence #Vigilators #GamesWorkshop #Citadel #miniatures #hobby #paintingProgress #isolationhammer