Hey everybody,
I thought it would be nice to end this week’s birthday celebrations with a look at how the future of the Harry Potter series is shaping up – even if that future is currently set firmly in the past. I’m talking, of course, about the Fantastic Beasts series of movies!

Released back in 2016, the initial movie follows Newt Scamander as he travels to America as he attempts to release one of his fantastical beasts back into the wild. He runs into a problem when his case gets mistaken for one belonging to a Muggle (or No-Maj, as the Americans call them) and pandemonium ensues across 1920s New York, as Newt attempts to recover his lost magical creatures.

Along the way, we have a side story of the Director of Magical Security, Percival Graves, and his investigations into a powerful magical force within the city. The twist at the end of the movie is that this is none other than Gellert Grindelwald, the infamous Dark Wizard who believes in the superiority of wizardkind. Oh yeah, spoiler alert.

The first movie is a fun adventure, and without that little postscript at the end, would have been entirely fine as a standalone movie set within the wider Harry Potter universe. However, it turns out the movie is the first in a series – originally a trilogy, then projected to five films, which deals with the history of Grindelwald and culminating in the mythical duel with Dumbledore. 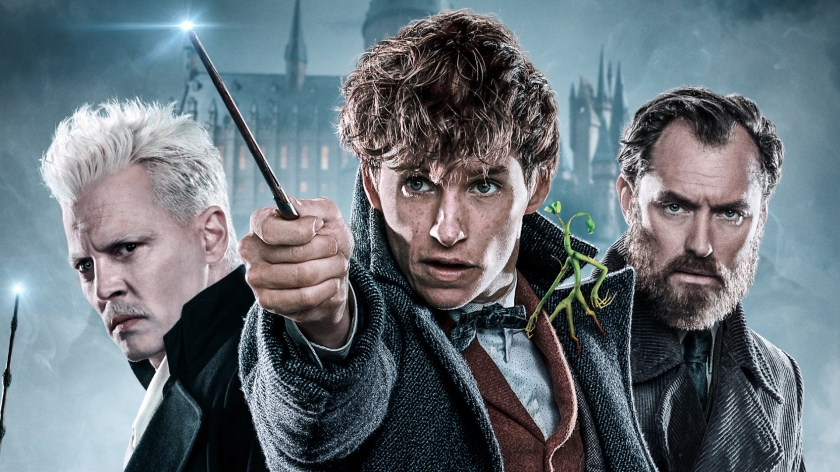 The second movie, The Crimes of Grindelwald, was released in 2018, and is perhaps a more focused movie than the first, in that the big baddie takes a more central role. The action has been relocated to Paris, with Grindelwald taking up residence with his disciples there as he attempts to track the powerful Obscurial, Credence. Newt is dispatched by none other than Dumbledore to try and get to Credence first. We get some inkling of the history of Dumbledore and Grindelwald, though a lot of it is implied from the stuff we know from Deathly Hallows.

This film has come under a lot of fire, from what I’ve seen – from the continued casting of Johnny Depp following accusations of spousal abuse, to the racial implications of Nagini as a Maledictus. Sometimes, I get the feeling that people are determined to not enjoy something on principal…

At any rate, both my wife and I really enjoy these films for what they are, a continuation of the exploration of the wizarding world, which began back with the first Harry Potter novel in 1997. The fact that the world has been blown right open here, so that we’ve seen New York, Paris, and we’re promised next to travel to Rio de Janeiro, is just simply delightful, and while there are always goofy parts to these stories, let’s not forget how goofy the books could be. I mean, some of the descriptions of Dudley Dursley leap to mind at once as defying all sense.

I do feel that people sometimes are just not happy unless they’re casting shade over popular things – and I realise there’s an irony about that, coming from me writing on a blog where I often criticise stuff quite negatively! But where these films are concerned, a big part of me thinks there may be something more at play here.

The Harry Potter novels have a sense of wonder to them, as we learn about the wizarding world through the eyes of the title character, and share in that sense of wonder that he himself exhibits for the most part. There’s also something quite innocently charming as we do this through the eyes of a child. For the adults among us, there’s a wonderful air of nostalgia as we read these books, as we remember our own childhoods and school days, irrespective of when we came to the series.

With Fantastic Beasts, however, that’s not the point. The world is presented to us from the adult perspective from the get-go, so it doesn’t have that sense of childhood nostalgia and charm. The main characters are all fairly accomplished witches and wizards and so, rightly or wrongly, the films expect us to have some understanding of the world that they inhabit before we begin. Some exposition is given through the fact Newt befriends the No-Maj Jacob Kowalski, the man who took Newt’s briefcase, and therefore gives some background to what is going on. This film series expects more from us, but has so much more to offer in return. We shouldn’t go into this series expecting the same level of charm and enchantment as we get from the main seven-book series, else we’re sure to be a bit disappointed.

As I said, though, the films aren’t without their flaws. I’m not a huge fan of Eddie Redmayne’s hunched, almost twitchy performance – I suppose it has something to do with him being an introvert? That’s nothing, however, to Ezra Miller as Credence, who seems to be trying to out-hunch Eddie, though added to that is a curiously wooden performance. Is he supposed to be trying to shrink out of the spotlight? Is it meant to convey (spoiler alert) the internalisation of his magical power as an Obscurial? Don’t know. He does get a bit better in the second movie, but still, I’m not a fan.

I’m also not big on the fact that (a) Dumbledore is teaching Defense Against the Dark Arts at Hogwarts (when he was said to be the Transfiguration professor prior to gaining the role of Headmaster) and (b) he uses almost exactly the same Boggart lesson during the flashback scenes that Lupin teaches in 1993. I’d got the impression, rightly or wrongly, that Lupin was quite an inventive teacher, and his methods were quietly unique; turns out, everybody gets a go with a Boggart as part of their magical education. I mean, that could be entirely possible, but it just irritated me a little bit!

But that’s no reason not to enjoy these movies. They take the magical framework that we’re used to from the Harry Potter books, and build upon it in new and interesting ways that are really pretty fascinating. There is a part of me that feels as though the final duel is going to be almost impossible to film satisfactorily, although we won’t have to worry about that for a while yet, given that production on the third movie has stalled due to the coronavirus lockdown. More than anything, though, I think it’s just really cool to travel the magical world, and see things that would never have been possible to see in a series set at Hogwarts.