So the world is currently in lockdown, as we all try to stop the spread of coronavirus, and the hobby community has really embraced this enforced isolation as the perfect time to get some of that old backlog painted. Personally, I’m classed as a key worker, so I’m still going into work every day, but I’m trying to stay inspired by the posts I’m seeing on social media, and I think it’s safe to say that I’m quite firmly over the hobby slump of a few weeks ago!

Space Marines are possibly the most iconic part of the Warhammer 40k setting, and even having had multiple redesigns over the years, there are design elements in there that effortlessly evoke the grim darkness of the far future. The most recent, Primaris iteration, has seen them almost with a meaner face, and they’re certainly much bigger now than they used to be. But for me, I think there will always be something about Mk VII armour that calls to mind the “classic” space marine.

A few years ago, I decided I was going to paint up a force of Space Marines in the quartered scheme of the Novamarines, a successor chapter to the Ultramarines. However, with barely two squads painted, I had to call a break, and I’ve not returned to them since. It’s a shame, because it’s a lovely scheme, and I was really very pleased with myself, with the units that I had painted. For this project, I had decided I would only use Mk VII tactical armour, and bought a host of bits for the occasion. However, I’ve since called a halt, and I’m now planning a wholly different project.

When I made the move from Fantasy to 40k, Space Hulk was a big deal, and there was a lot of hullabaloo around tyranids and Blood Angels. Now, I love the faux-Catholic vibe of the Imperium, and really appreciate that aspect of both the Dark Angels and the new Sisters of Battle. However, as far as marines go, the Blood Angels have always grabbed my attention for the sheer number of Chapter-specific units that they have. Along with Space Hulk, one of the cornerstones of my early days and weeks with 40k was the Shield of Baal series, and I picked up that box of good stuff that included the demented greatness that is the Death Company. However, as time went on, I sold all of that stuff off, but back in September last year, I began to reminisce about the Shield of Baal – in part, thanks to having finally started playing games with the fairly substantial tyranid army that I had by then amassed.

I’ve said it before: everyone probably has a Space Marines army. For me, I’ve hovered around the Dark Angels and Ultramarines for years, but last autumn, in the weeks and days leading up to my wife going into labour with our firstborn, I’d settled on Blood Angels for mine. As such, I feel almost a special place in my heart for this force. It was this Codex that I was reading while we were waiting to go down to the labour ward, and these were the models that I was building when, once our baby was here, the hospital staff had sent me home but I couldn’t sleep through sheer nervous excitement.

So far, then, I’ve got a few units of the older mini marines that I’ve had hanging around for years – a Devastator Squad, and an Assault Squad, and something that I’m really excited about, a Sternguard Veteran Squad. On top of that, there are a couple of HQs – a Captain and a Lieutenant. It’s really interesting how Lieutenants aren’t exclusively a Primaris thing, but have been reverse-engineered for the older marines, as well.

One of the things that really attracts me to the Blood Angels is the Chapter-specific units, as I find all of those fancy gubbins that make them unique really exciting! I’ve got a couple of squads of the Blood Angels tactical squad waiting in the wings, but I do want to add in some Sanguinary Guard as a sort of focal point for the army. I mean, there’s a lot of red, and with some Death Company bits in there, I’ll also have some black on the sides. Having a massive blob of golden warriors in the middle will really stand out, I feel, so hopefully I’ll be able to get them once lockdown is over, and things return to normal! 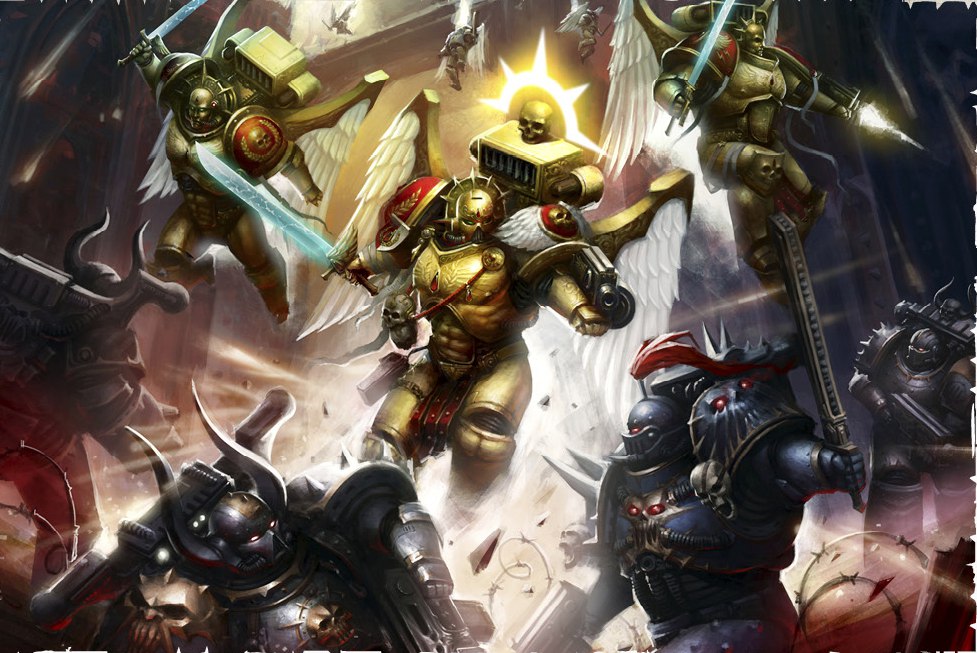 Death Company were a significant feature of the Shield of Baal box, with one squad alongside the dreadnought. Almost four years ago, I built up these chaps, although I have sadly since sold them off when I was trying to concentrate on just a couple of xenos armies…

Alongside the tacticals and the devastator gunline element, I do want a massive sledgehammer of a force to really just assault the enemy – the assault squad will be part of that, of course, but I think this is what is really exciting me about the Blood Angels, the fact that we have so many heavy-hitters like the Death Company and the Sanguinary Guard. With the right buffs, as well as the plethora of new rules from Blood of Baal (review coming soon, I haven’t forgotten about the Psychic Awakening!) it seems like the army really ought to hit like a brick to the face.

Of course, that isn’t forgetting the guns, and another reason for wanting to start on this project was the simple fact that I liked the look of red marines with blue helmets! So I’ve started out painting the Devastators, and so far I think they’ve been turning out pretty nicely! Don’t get me wrong, I’m not good at painting the red, but they don’t look too terrible, I think!

I hope you’re all coping reasonably well under the pressures and the strains of the current crisis, and that you’re all managing to stay safe. I’m going to try not to comment too much about this, as I do want my blog to remain a fairly decent escape from the world. While things have been quite quiet here in recent weeks, I’d like to pick up the pace once more as we head into the second quarter of 2020, so there will be plenty more of the usual fare coming up – book reviews, random musings and waffling is all just par for the course, now, after all!