Hey everybody!
It feels like the last couple of months have just flown by in a haze, and I hadn’t found much time to either hobby or come here and ramble about all manner of junk – I’m sure you’ve all missed that! I’ve been in a bit of a hobby slump of late, though, and haven’t been much in the mood to do anything. Feels like I’ve lost my hobby spark, and was struggling to get it back. Well, I recently took a major shift and decided to work on some Age of Sigmar stuff, as fantasy miniatures always feel like something of a breath of fresh air when I’ve been painting 40k for a long while, and I think my work on some Warcry stuff lately has begun to get me back in the saddle!

I mean, who couldn’t love that face, right?!

At the start of the year, I’d been thinking that I’d like to get a Slaves to Darkness army at last, and so had some vague ideas following my purchase of the battletome, mainly involving at least one Warcry warband, possibly two – the Cypher Lords, and maybe the Unmade. I had the idea of using a lot of rag-tag cultist-types, so also threw in the Godsworn Hunt, but the actual Chaos Marauders kit does put me off a little bit, so I had thought I might pick up some of the Bloodreavers as stand-ins, but I think that’ll be a long way off. I then thought about picking up some Wrathmongers to use as Chaos Chosen, as while I love the look of the kit, it is finecast, and so I doubt will stand up to the rest of the army now that the Warriors have been re-done. With that, though, I had begun to think that this could be the first time I look at creating a Chaos army with a distinctly Khorne feel! Normally I go Undivided or Slaanesh, but this could be interesting!

It definitely helps, having something I’m not normally into!

Lacking inspiration for a while now, I think this might be the time for a change of mood… #Warhammer #AgeOfSigmar #SlavesToDarkness #Chaos #Warcry #Wrathmongers #newProject #GamesWorkshop #Citadel #miniatures #hobby #buildingWarhammer #WIPwednesday

I’m still playing around with the Slaves to Darkness idea, as I’m not entirely sure how I want the army to look. I’ve got vaguely 900 points (or thereabouts) plotted out, with the units I’ve mentioned plus a Chaos Warshrine (because that model is just so iconic!) 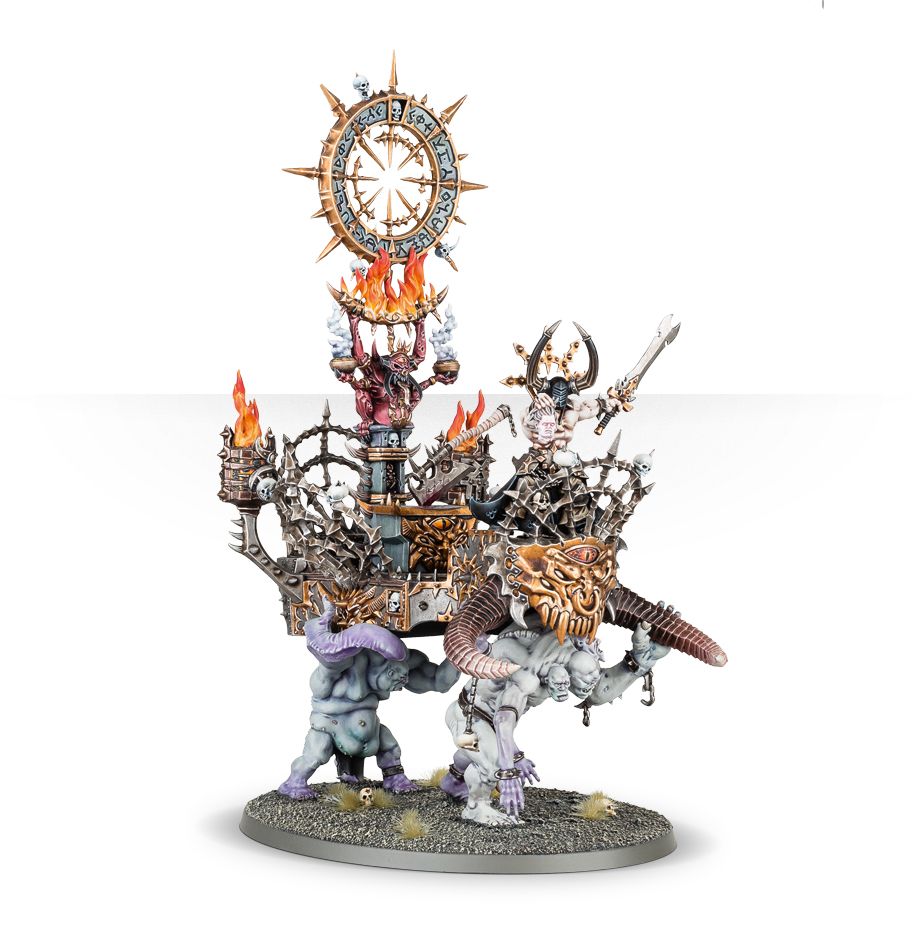 But yeah, I’ve started now to really go heavy into Warcry, and I’m interested in getting a warband finished so that I can play a game. The Cypher Lords are probably the models I’m furthest along with, having done some experimentation with Contrast paints back in January, so that could be a plan. I think I have all of the monsters released so far, too, so could see myself adding in a Mindstealer Sphyranx at some point (more for the theme, than anything!) So it’s all definitely quite exciting!

I suppose I just need to look into the rules now, and see if I can get a game sorted!

However, it’s not been all fantasy-related this month!

I’ve been slowly chipping away at this gent for a week or so now, having gotten some of the silver done, as well as thinking about the overall scheme that I’d like to have for it. When I first painted a Triarch Stalker, the results were decidedly different!

I’m hoping to get the two of them painted up for the army soon (the older model has been stripped, and is ready for re-painting as soon as I get my act together!) I might even get a third, not sure yet. That targeting relay rule is just so good, I feel as though they should be staples of the army!

I think the Necrons are possibly going to be my 40k focus for a while, as I’d really like to get my army up to scratch now. They are my first love, and I definitely enjoy playing them when I get them to the table, so it makes sense that I should have more toys to field than just waves of infantry! As fun as waves of infantry can be, of course!

The old bête-noir of the Doomsday Ark has also been at the back of my mind, and I think I’d like to get that painted up sometime soon, too. Though that’s probably going to be a long project, as well, so I suppose we’ll have to see how I go with that one!

As much as I do still enjoy the hobby and the game, I think I’d like to break out of the Warhammer thing more, though, and play more of a variety of games. I’ve sold off so many of the old favourites that it’s a little bit scary to think about, but I do still have plenty to enjoy. Stuff like the Ghostbusters kickstarters, all of that Hellboy goodness, and the classics like Eldritch Horror and Lord of the Rings LCG – I’m hopeful that this year will see a resurgence in my non-Games Workshop gaming, anyway!

It’s always good to have a variety, after all!