Last week, I finished reading The Unremembered Empire, the 27th novel in the Horus Heresy series. I’ve not read one of these books since Betrayer back in the summer. In real time, there is the short story anthology Mark of Calth to check out, as well as the Salamanders novel Vulkan Lives, though I’ve decided to leap over some of those novels that don’t really hold any interest for me and keep ploughing through the main storyline. (That said, I might come back to some of the short stories, we’ll see!)

In the weeks and months after the invasion of Ultramar by the Word Bearers, Roboute Guilliman has sought to create something of a haven for the Imperial loyalists in the five hundred worlds. Since the planet of Sotha has seen the mysterious Pharos xenotech that has almost replaced the Astronomican as a light through the Ruinstorm, principally squads of Salamanders and Space Wolves, the latter sent to shadow Guilliman and censor him if he proves to be disloyal.

After an attack on the Ultramarines’ Primarch by shadowy members of the Alpha Legion, Guilliman reveals his plans to provide an Imperium Secundus centred on Macragge, but he is incredibly reluctant to sit on the throne himself. However, when he is about to reluctantly take up the mantle of regent, none other than Lion el’Johnson arrives with near-Legion strength Dark Angels, following the light of the Pharos. Guilliman finds it difficult to trust the Lion, however, due to his almost compulsive keeping of secrets, one of which proves almost disastrous for Macragge, as Konrad Curze is revealed to have hidden on the Lion’s ship.

Curze and the Lion aren’t the only Primarchs to descend upon Macragge, however, as not only Vulkan arrives, insane following his torture at the hands of Curze, but also Sanguinius and his Blood Angels, fresh from their battles in the Signus Cluster.

Curze runs amok in Magna Macragge Civitas, over a night of hell for the combined Ultramarines and Dark Angels forces, though he is sent into the Warp by the Perpetuals John Grammaticus and Damon Prytanis, who have arrived on the planet to fulfill the wishes of the Cabal by killing Vulkan, furthering their plans to allow Horus to win the war and for Chaos to burn itself out: if Vulkan is not present to help defend Terra, this will be easier. Guilliman proclaims Sanguinius as the new Emperor, as the Primarchs agree to immediately forget about this whole episode if it is proven that Terra and the Emperor still stand firm. 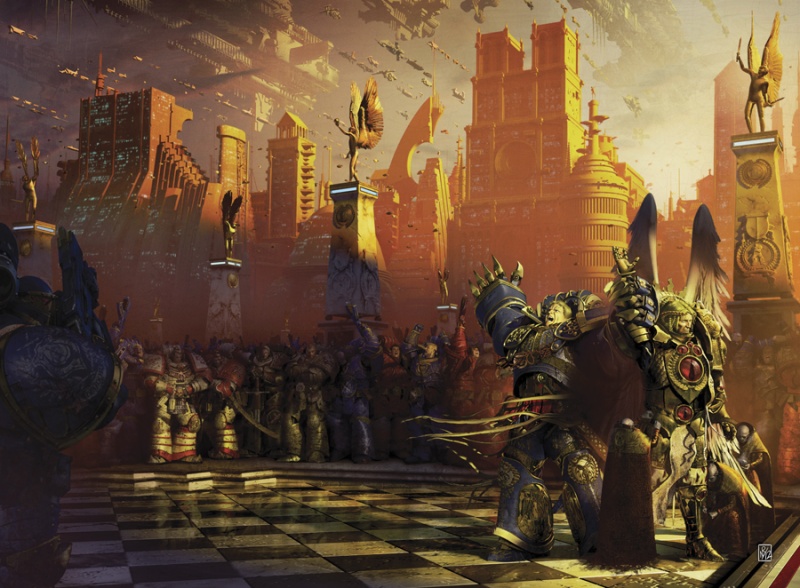 I’d fully expected to really enjoy this book. Dan Abnett is of course a fan favourite, and I really enjoyed Know No Fear, the last time he wrote about the Ultramarines. I don’t know whether it was just something as straightforward as the fact the cover had me expecting Sanguinius to show up for more of the book, but I just couldn’t get into it as much as previous books. There’s a lot going on, for sure, and Abnett covers a lot of ground between following up with Vulkan, bringing the Lion and Curze as well as then Sanguinius into the five hundred worlds.

We actually have a lot of Guilliman and the Lion, which was actually quite interesting for the most part, as we see the pair of them grow to almost-trust each other as potentially the only two Loyalist Primarchs remaining in the galaxy. I find it interesting that the Lion is a consummate secret-keeper in a period of time when we don’t have the whole baggage of Luther and the Fallen yet. It’s just part of his shtick, I guess. I’ve not read much of the Lion yet in the series, having avoided much of him after Descent of Angels, but this was a really welcome return to him.

Guilliman was much more of the statesman that we have come to expect from Ultramarines at large, with a surprising lack of the tactical/strategical brilliance we saw in Know No Fear. At least, that was my feeling! He’s still a much more interesting character than a lot of people would have you believe, of course, and his role in the book as the architect of the Imperium Secundus was really fitting overall. Maybe that’s where his strategic thinking comes in, though? Hm.

I think the highlight of this book, though, is probably the night of terror wrought by Curze throughout Magna Macragge Civitas. It’s a study in terror tactics, and I was really impressed at how relentless the pacing was. We do get inside of Curze’s head, and see how he is driven by his visions, and that sense of invincibility that he has, having seen his death already. However, for the majority (the entirety? I can’t remember) of the night, we’re seeing things from the eyes of others, which gives a real sense of the danger going on.

There is almost a Shattered-Legions sense from the book early on, when we see White Scars, an Imperial Fist, Iron Hands and Salamanders all converge on Macragge – only to discover that there is an Iron Warriors warsmith in charge of the Pharos! However, this is quickly pushed into the background as we focus on the Ultramarines and Dark Angels. Rightly so? I don’t know. They do make something of a reappearance later on, of course, but it feels a bit like a lost opportunity. For sure, the ending does feel almost rushed, with the denouement with Sanguinius being proclaimed Emperor coming almost as an afterthought…

I realise that I’m being quite critical of this book, but I suppose that’s only because I was hoping for so much from a Dan Abnett novel, and his previous offerings in the series have been pretty solid. I think it’s a pretty well-known fact by this point, however, that the Horus Heresy series does slacken off a little bit in the middle, as we’ve got so much ground to cover. Having 18 Legions pretty much all as important as each other is a tall order, though, and things do broaden out considerably in order to cover every corner. I think it does begin to tighten back up, though, as we get into the 30s, so hopefully there’s not long to go before we get back into the realms of the good stuff.

I think I said this about a year ago, but I want to get back into reading the series, and see if I can make some decent headway into it all. Two more novels have recently been released in paperback, bringing us up to fifty-one paperbacks now available. Gulp! I’ve definitely got some catching up to do, but at least I’m at the halfway point of the 54-book series!

3 thoughts on “The Unremembered Empire”