Hey everybody,
It’s been a while since my last blog post on here – in fact, I hadn’t realised just how long ago it was! Time to catch up, methinks!

Should see me through the festive season! #nowReading

First of all, I read the very wonderful Grey Knights, the first novel in the Grey Knights omnibus, shortly before Christmas. It follows Justicar Alaric as he works alongside Inquisitor Briseis Ligeia to prevent the rogue Inquisitor Valinov from bringing the daemon Ghargatuloth into the universe. As the majority of the Grey Knights have been deployed to the Cadian Gate in an effort to stem the tide of Abaddon’s Thirteenth Black Crusade, Alaric only has a small contingent to aid in his task. They track the likely place for Ghargatuloth’s return as somewhere within the Trail of Saint Evisser, and we really delve into the whole world of Imperial saints and the Chaotic corruption there – there are several twists and turns along the way, which I don’t want to spoil here because they were really well done, but suffice it to say it’s definitely worth picking this one up, even sixteen years after publication!

There is so much to enjoy in this novel, even though I found it difficult at times to get the time to actually read it! Having recently made a commitment to getting back into my Grey Knights project, I think this made me enjoy it even more, seeing the way the Grey Knights do battle. We get some really great descriptions of the Fortress-Monastery on Titan, and there is the real sense that Space Marines are, at their heart, warrior monks.

I very rarely read an omnibus as a single book, but rather treat it as the collected individual titles, and come back to it each time I want to read a particular book collected within. However, this is probably the first time I’ve wanted to carry on with the books, and I’m definitely planning to read the second book very soon.

Shiny boys! So, having lost a bit of confidence after attempting to paint the Orlocks, I thought I'd return to these chunky lads to get back into the swing of things… #Warhammer40k #GreyKnights #Chapter666 #BrotherCaptain #StrikeSquad #GamesWorkshop #Citadel #miniatures #WIPwednesday #hobby

Sadly, painting has not been something that I’ve been enjoying of late. I think I’ve been really out of practice since not having the time after the firstborn came along. Painting is, of course, something that improves over time and, after having a significant break, I’ve found that my brush control has really fallen by the wayside, and as a result I’ve become really frustrated with myself for not producing the sort of miniatures that I want.

I’d been wanting to paint up the House Orlock gangers that I’d started to paint almost two years ago, but a combination of the loss of confidence with a brush, as well as the fact the primer on some of these is a little thick in parts (it’s a grey primer, too, and I hate painting over grey!) has made me give up and strip them.

I’ve been watching Duncan’s video on painting the Sump Dogs, though, and as always, he has inspired me to give them a proper go. I mean, none of the lazy “just give it a drybrush and call it quits!” – I’m going to (try!) and follow this guide to the letter. We shall see how I get on!

Incidentally! How sad is the painting world now that Duncan has left GW?! I was gutted when the news was leaked shortly before Christmas – Duncan’s videos were basically how I learnt to paint!

This classic was, probably, the first miniatures-painting video I ever watched, and the massive collection of videos have been some of my favourites over the years – always come back to them, and I always look for a Duncan video when I’m going to paint something to see what he has to say about it. Hopefully they’re going to keep the archive up there, at any rate!

I'd voted for the Keeper of Secrets, but Abaddon is a fantastic model, and a very worthy winner! 2019 was pretty amazing for new models and re-sculpted old masters – can't wait to see what 2020 will bring! #Warhammer40k #HereticAstartes #BlackLegion #AbaddonTheDespoiler #GamesWorkshop #Citadel #miniatures #hobby #awesome

Model of the Year was announced the other week, and it was none other than the new Abaddon the Despoiler! I’m not sure if that was a shoe-in, though, as my personal choice was the new Keeper of Secrets, which is just such a phenomenal creation, it’s almost unlike anything else they have!

In a year when we had all of the Genestealer Cults stuff, the new Chaos Marines, new Drazhar, Ossiarch Bonereapers, new Slaves to Darkness, new Sisters of Battle – and all of that incredible Warcry stuff!

There were so many amazing new models in 2019, it was definitely a hard call. 2020 is already shaping up to be wonderful, now that we’ve had some of the new Sisters released – that Triumph of St Katherine centrepiece model is just astounding – so I can’t wait to see what else is in store!

Hopefully by then, I’ll be more confident with painting once again, and can actually knock out some of these new models!

So yeah, I think I need to get cracking with regaining my confidence when it comes to painting. There are so many miniatures that I have on the back burner of course, so I really need to crack on! I think a lot of this will be helped by going back to basics, to some extent, and trying to re-learn a lot of stuff. It’s definitely going to be worth spending the time to do this, though, as I so many models that could be outright ruined by sloppy (or worse) painting!

I mean, I’m going to be picking up the Triumph of St Katherine, for goodness’ sake! I definitely need to up my game for something so fancy! 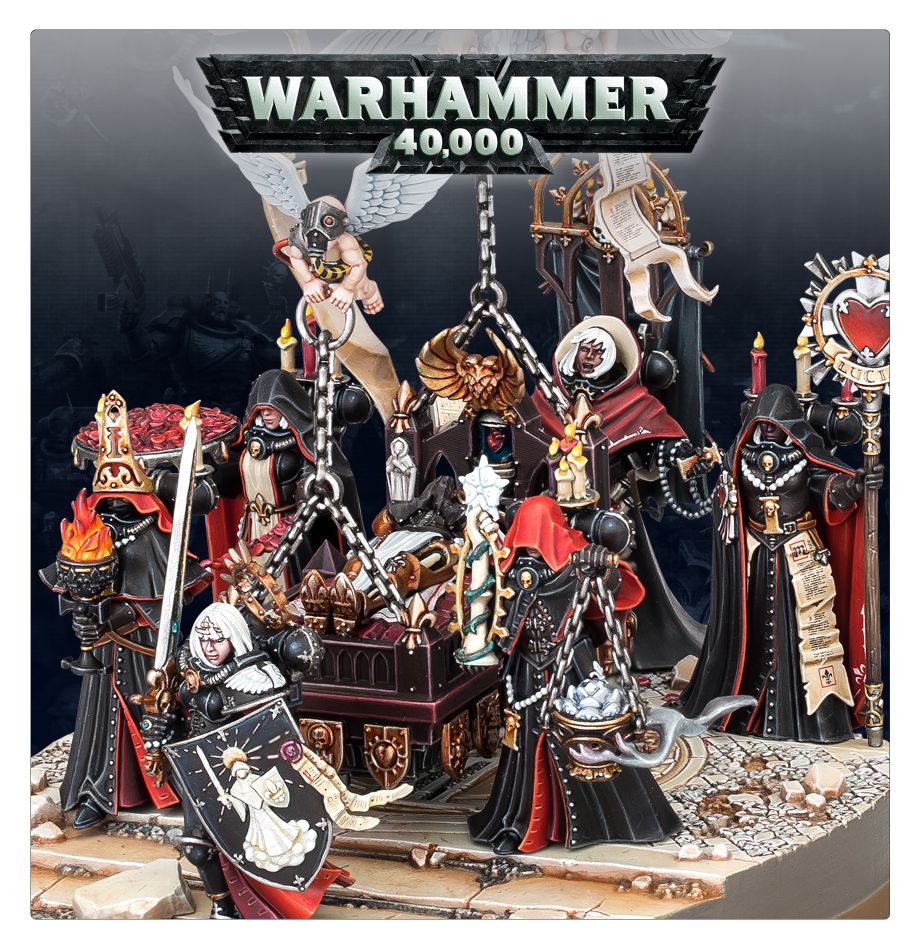 One thought on “January catch-up!”