Hey everybody,
So I’m trying to catch up here with all of the books that I’ve read so far this autumn (although there haven’t been all that many, truth be told!) and today it’s time for the conclusion to the new Thrawn trilogy, Treason!

After the events of the second book, I had decent hopes for the third. Any book with the Emperor on the cover has got to be worth reading, right?

The novel takes place sometime after a raid on the TIE Defender assembly line on Lothal by Hera Syndulla and Kanan Jarrus, which I believe was featured in an episode of Rebels. Thrawn is desperate to secure funding for the project, but unfortunately Director Krennic’s Stardust project is eating up Imperial resources, and Tarkin informs the Grand Admiral that there isn’t enough to go around. Stardust has been put back a little by the problem of grallocs – larger cousins to mynocks – attacking the shipping points, so to settle the problem of funding, Tarkin suggests a wager – if Thrawn can solve Krennic’s problem within one week, the Defender project will receive funding. If not, any additional funds will be plowed straight into Stardust. Tarkin and Grand Admiral Savit both approve the plan, and Tarkin, who has designs to take over the Stardust project one day, quietly tells Savit to help Thrawn however he can.

Krennic leaves Thrawn with his aide, Ronan, to effectively try to ensure the problem is resolved, but outside of the week stipulated by Tarkin. This felt a bit weird to me, if I’m honest, as it seemed like quite the flimsy premise for a book, although in retrospect I suppose it was quite indicative of how irresponsible the upper echelons of the Imperial military can be…

There is a lot of politicking between the moffs and grand admirals that pepper the book, with each trying to claim credit over the other. Krennic admits to Ronan that he wants to claim the credit for solving the gralloc problem for himself, which is perhaps symptomatic of the man himself, as we see him in Rogue One: Catalyst pretty much using Galen Erso’s scientific prowess to bolster his own position.

Meanwhile, however, Thrawn manages to deduce that the grallocs are not eating ships, but that the attacks appear to be a ruse to steal their cargo. The Chimera follows one such lost ship’s vector, and the Imperials find the ship and its crew murdered on an abandoned space station.

The Imperials have attracted the attention of a Chiss patrol ship under the command of Admiral Ar’alani, under whom is serving none other than Eli Vanto. While their reunion is far from friendly, Thrawn and the Chiss begin to work together to get to the bottom of the larger threat, that of the Grysks. Backtracking further along the ship’s vector, they find a cloaked warship at an asteroid base and engage in a brief skirmish, destroying the Grysks and discovering a young Chiss navigator named Un’hee being used by them. Ar’alani believes that Un’hee can allow the Chiss to discover the location of the Grysks’ base, and destroy the alien threat once and for all. Despite Ronan’s protests that the Grysks have nothing to do with the grallocs, and calling Thrawn’s loyalty into question, Thrawn believes that the Grysks pose a very real threat to the Empire, having already penetrated far into Imperial space, and so continues on with Ar’alani.

Vanto is given the task of sifting through data on the missing Stardust supply ships, and deduces that the contents of 28 of these ships had enough parts to make a total of eight complete turbolaser batteries. Suspicion falls on Governor Haveland, the governor in charge of the sector, and Thrawn dispatches Vanto and Ronan to the Aloxor system in an attempt to find out what Haveland is up to.

The mission uncovers that local smugglers are moving goods through the system on orders of Grand Admiral Savit. Vanto and Ronan are almost captured as spies, but rescued by an ISB operative sent by Colonel Yularen as a favour to Thrawn. They learn that the smugglers are moving the gas used as bait for the grallocs, adding a further dimension to the proceedings.

Meanwhile, Thrawn and Ar’alani track the Grysks to a communications hub, and manage to defeat the aliens and rescue some of the original pirates behind the Imperial thefts. Thrawn and Ar’alani manage to destroy the Grysk threat, before Thrawn then travels to the Sev Tok system to rendezvous with Savit. There, he confronts the corrupt Grand Admiral with proof of his illicit dealings, all encrypted on a data card that uses an encryption key reserved for sole use by the grand admirals. Savit, under pressure, admits that Stardust has been bleeding the Imperial navy dry, and his principle concern was to ensure vital supplies could find their way to the navy. Savit attempts to defeat Thrawn, but the nature of his treason loses him command of his men, and Thrawn prevails.

Ronan’s report to Krennic and Tarkin is that Thrawn failed to eliminate the grallocs in time. Tarkin promises to divert funding to Thrawn once Stardust has been completed. Thrawn determines to return to Lothal, and Tarkin assigns Captain Pellaeon to the Chimera to assist him. 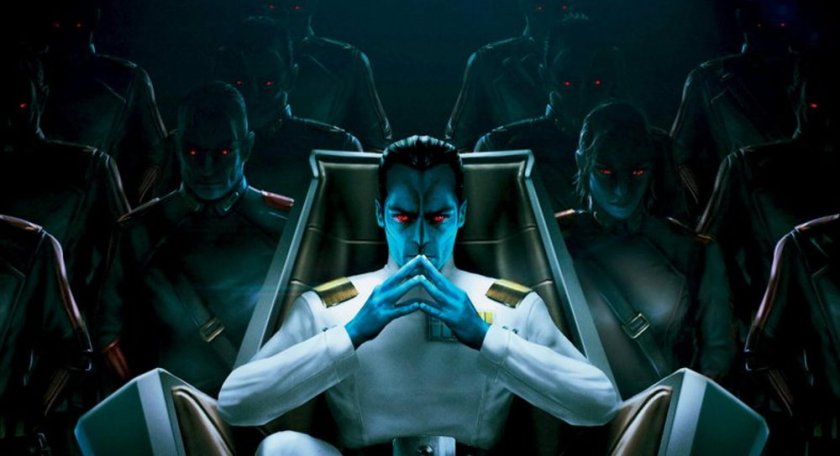 The new Thrawn trilogy has been a bit uneven, for me. While each book has its good parts and bad, there is always that nagging feeling at the back of my mind, that this isn’t the Thrawn trilogy that I know and love so much. That said, the trilogy did get better as it moved along, reaching a high point with the second book, and then seeing a slight falling-off in the third (in my opinion).

See, Treason is based on a bet that Thrawn cannot solve the gralloc problem for Krennic within a week. That feels like such a flimsy premise for a story, especially when you look at how that story unfolds, with the fight against the Grysks. As I said earlier, it does reveal perhaps more than I’d first thought about the upper echelons of the Empire, and how a lot of this stuff is like a game for them. But it just felt a little bit off, somehow.

Thrawn is much as we know him to be, once more, which was heartening after the Thrawn-at-school that we had in the first book. Eli Vanto is back, so we get to see a bit of what has been going on with him, though I felt the payoff between him and Thrawn felt a little bit lacking, somehow. Vanto seems to have embraced his life among the Chiss a little too limply, for me. I don’t know – I kept expecting more from that part of the story, and didn’t really get it in the end.

There is a lot going on in this book, and for that, I really liked it. The stuff with the Chiss added an extra layer to the story, which made this book feel like more than just the general Empire vs Rebels stuff we’re used to seeing for this timeframe. The sub-plot with Vanto and Ronan was almost like a return to the Zahn books of old, as we see the fringe through his eyes like nobody else seems able to capture. I do like Thrawn, but maybe we could get more Zahn books in the vein of Scoundrels? Far-flung, dusty worlds with battered and worn cantinas, street-toughs and crime bosses are all realised in a very Zahn-esque way, and I do love it!

Seeing Krennic and the Stardust project once more was a bit of a surprise, as it has almost begun to feel like he might be the sort of character we’ll never really get to now that his story has basically been told through Catalyst and Rogue One, so that was nice.

All in all, I think Treason was a decent end to the series, managing to continue the story, wrapping up some aspects while – potentially – setting up the future. Thrawn is now with Pellaeon on the Chimera, do we think that Disney means to make the Thrawn Trilogy canon, after all? Who the hell knows…

What we do know, however, is that Zahn will be back with The Ascendancy Trilogy, starting next May…