Hey everybody!
In a move that will no doubt shock nobody at this point, I’ve found myself thinking about painting something completely different to what I’m used to, and feeling the need for – not a new challenge, as such, but just feeling like I want to try painting something different… and so I’ve been thinking about new armies, and looking at different stuff online, and have returned to an idea from a few years back now: the Wood Elves!

Wood Elves don’t really exist in Age of Sigmar. They were a faction from the Old World that encompassed the new Sylvaneth alongside their elven counterparts. I think this is the aspect of Wood Elves that appeals to me the most; the image in my mind of some tree-spirit creatures like the Treelord and Dryads, alongside their “mortal” followers, the Eternal Guard and so on.

I don’t honestly know enough about the elves (or aelves, as they are these days) to know if they’re worthwhile in an Age of Sigmar army. I still think I’d like to try and put together a small number of miniatures though, simply because I love the appeal of walking trees alongside elf hunters!

There seems to be an interesting mix of units available to the Wood Elves, which is another appealing factor. Of course, I’ve not looking into it in any great deal, so I suppose this could be equally true of any other faction, but I do like the fact that there are a lot of utility units, and nothing really seems to be too wasted. Of course, there are a lot of units that do their own thing, but then it isn’t simply reliant on heroes to then buff those units. 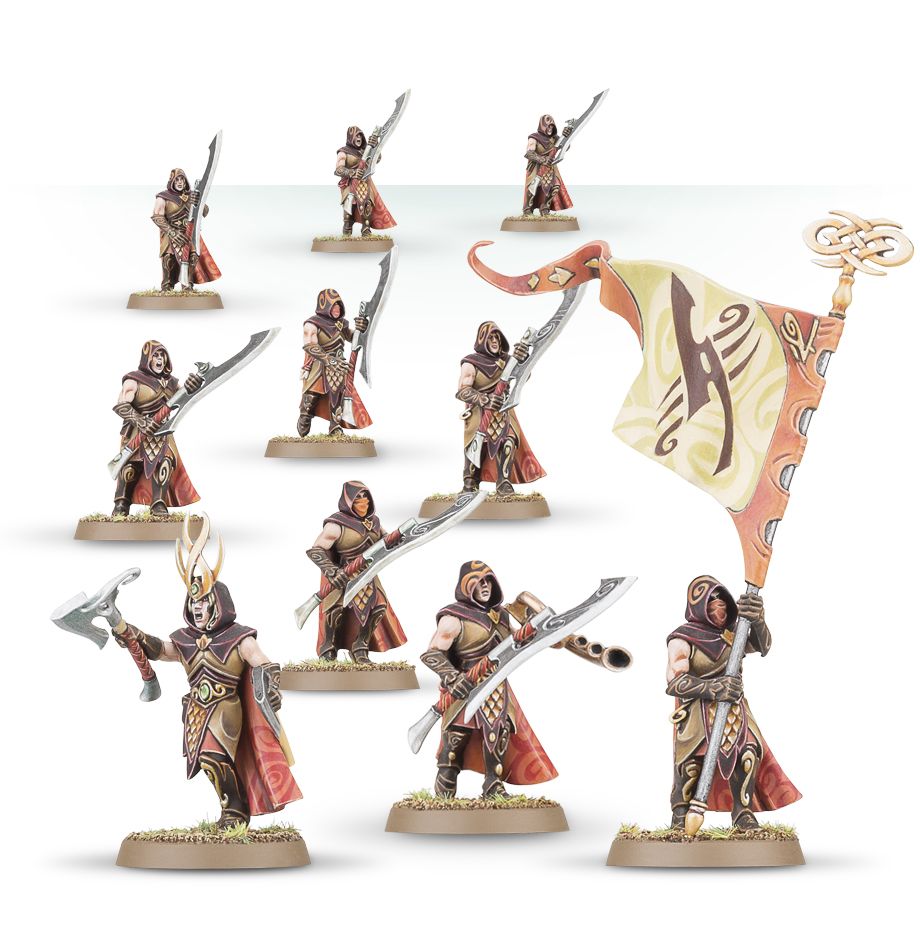 One of the units that first drew me to the army was the Wildwood Rangers, hooded and masked warriors wielding these massive two-handed draichs. I have previously picked up a box of these gents, in an effort to kit-bash them into plastic Incubi for my Dark Eldar army. Unsurprisingly, that was a project that ended in obscurity (well, ebay).

Of course, there have been so many new model releases that are just awesome for the Sylvaneth side of things since Age of Sigmar first launched, I think anybody would be hard-pressed not to want to include these in any such army! The exciting thing now, of course, is that we’ll hopefully be able to do exactly this, with the upcoming Cities of Sigmar battletome that was previewed at the weekend! 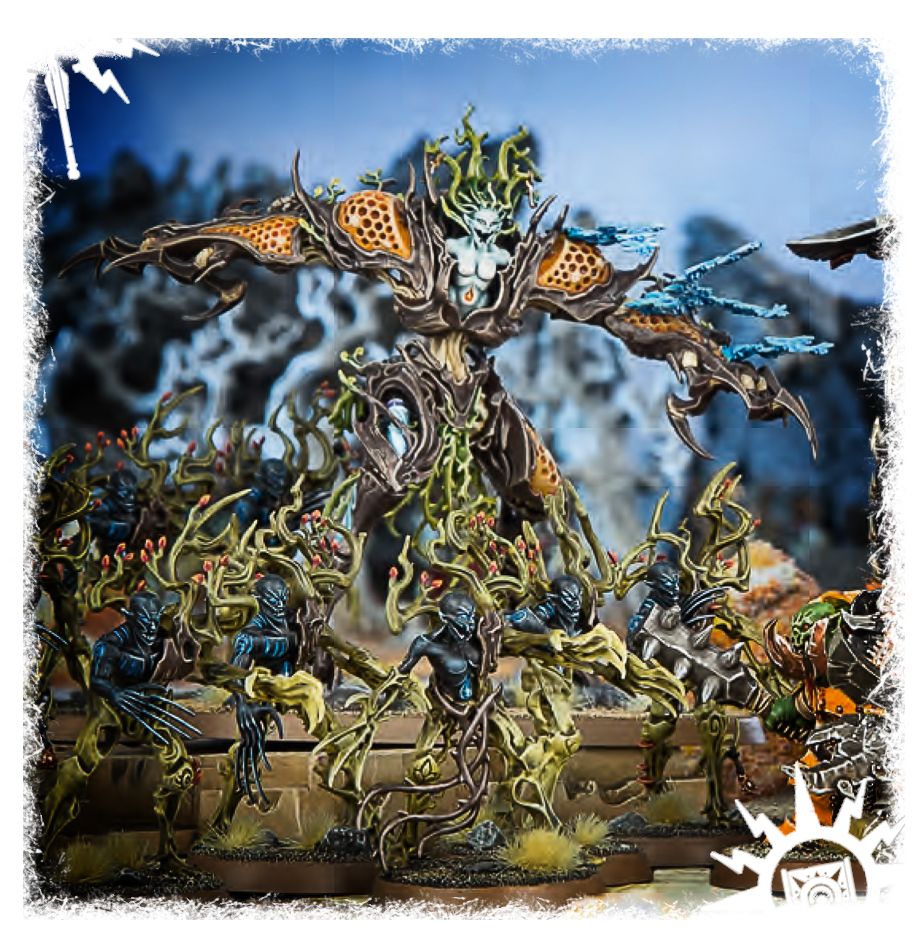 Back in the day, I was leaning heavily into Sylvaneth after I’d grown tired of painting Stormcast Eternals in the gold-and-purple scheme I’d been using, and had picked up several kits in an effort to build up a second force. The Tree-Revenants I later decided would be used as Mandrakes for my Dark Eldar, and I painted them up to match the main force:

Getting all of the outstanding Dark Eldar kits finished before I move house – my "Mandrakes" are finally based! #Warhammer40k #DarkEldar #Drukhari #WychCults #paintingWarhammer

I had also been painting Dryads, the first unit that I was building up for my Sylvaneth army, using the winter colour scheme from back in the day:

I also had the big daddy himself, the Treelord that would form the centrepiece of this collection of living trees:

I really like the Sylvaneth. I suppose part of it is because it takes me back to my early days in the hobby, where I would buy all kinds of random stuff and build and paint while the youtubes was on in the background. Back then, I used to listen to Joey Berry a lot, whose videos would chronicle her own beginning journey in the hobby and served as a nice sort of mirror. Given that Joey was a Wood Elves player, a lot of that has stuck with me down the years, and it’s a nice way to look back on my hobby “journey” (if that doesn’t sound too corny) and reminisce!

It was a wrench when I eventually sold all of this off a couple of years ago, thinking I would concentrate solely on 40k, only to then fall right back into it when Soul Wars came out and I found myself picking up more and more fantasy stuff once more as 2018 rolled to a close. I suppose thinking I would just stick to 40k was a bit disingenuous, as it was fantasy that got me into this wonderful game, and back in the day, I was actually really into Age of Sigmar and all the rest of it. 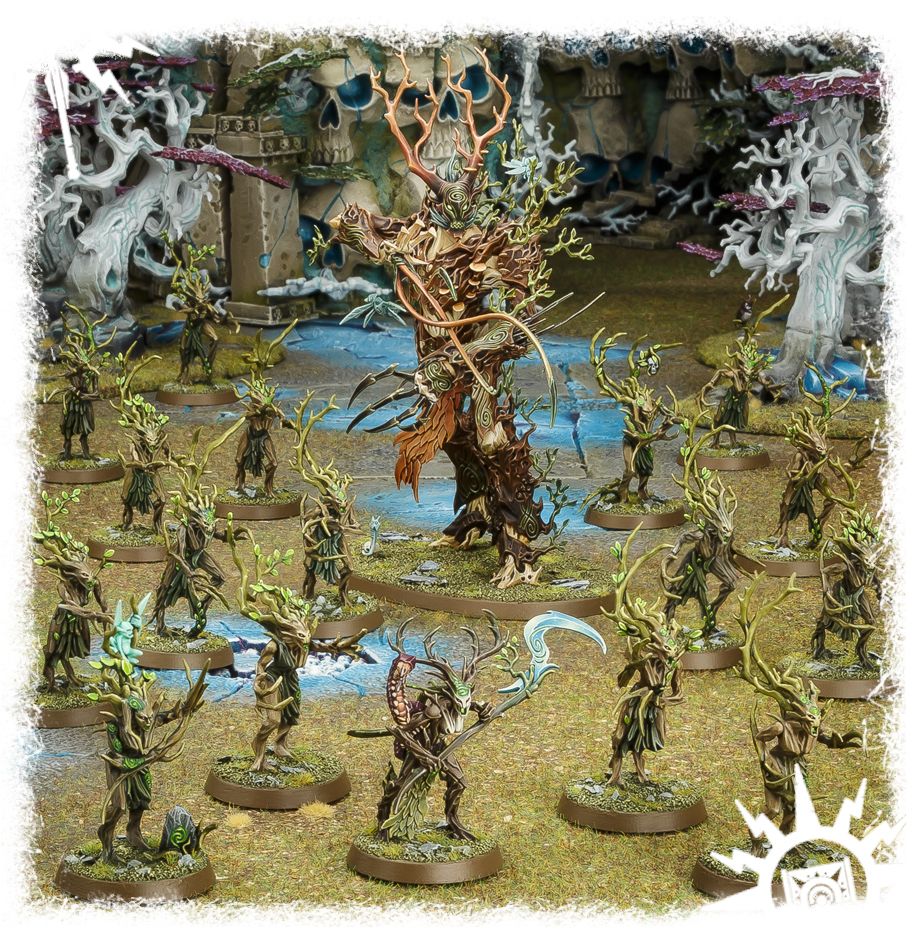 I’m probably not going to go wild with this project. I’ve definitely been thinking a lot about that Treelord miniature, and wanting to get one so that I can paint it up and enjoy it. Having a small band of miniatures adjacent to that would be just lovely, I’m sure, and making them a nice mix of tree-folk and elves is the dream.

I’m probably still going to stick to my plans for the Nighthaunt and Legions of Nagash being my main AoS focus, with Chaos being a close second. Sylvaneth have some beautiful models though – there is just something really pleasing to me about painting fantasy miniatures. It was the same when I was painting up the Nighthaunt, something that just strikes a chord with me, and takes me back to my early days in the hobby. I think this could be a really fun side project though, so stay tuned for some (hopefully) exciting updates to see where I go with this for the rest of the year!