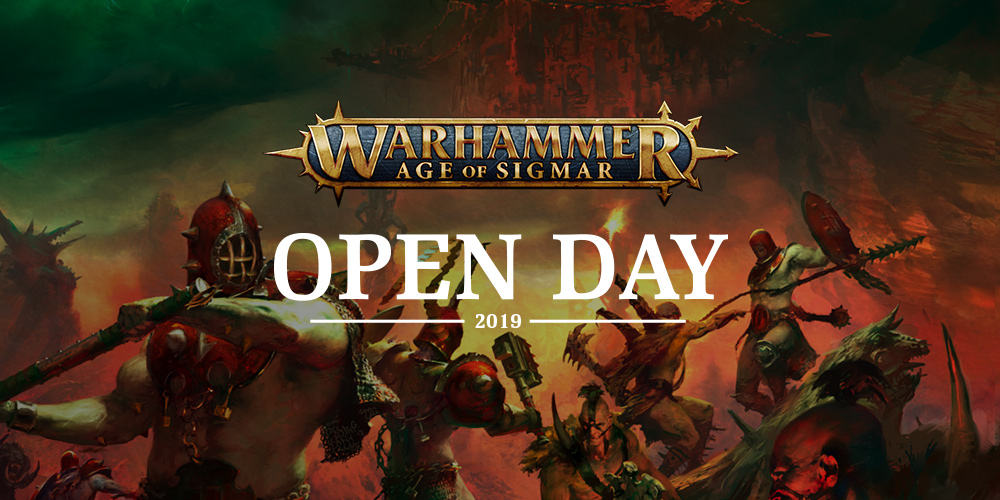 Yesterday was the Age of Sigmar Open Day over at Warhammer World, and perhaps unsurprisingly, the main focus was on Warcry, which is due out in a scant fortnight. 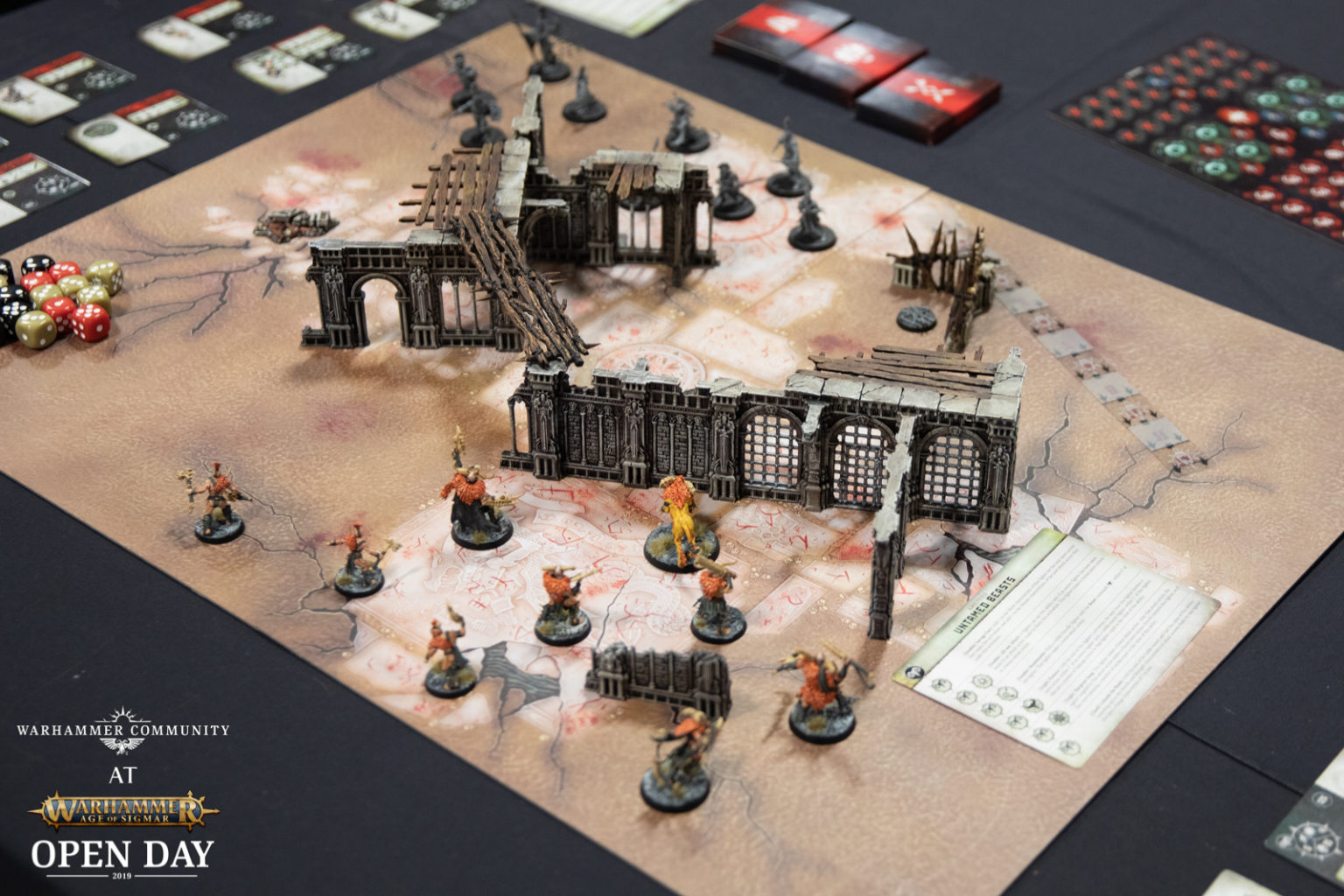 There were demo games, the beautiful models were on display, and folks were getting to paint up Iron Golems left and right. 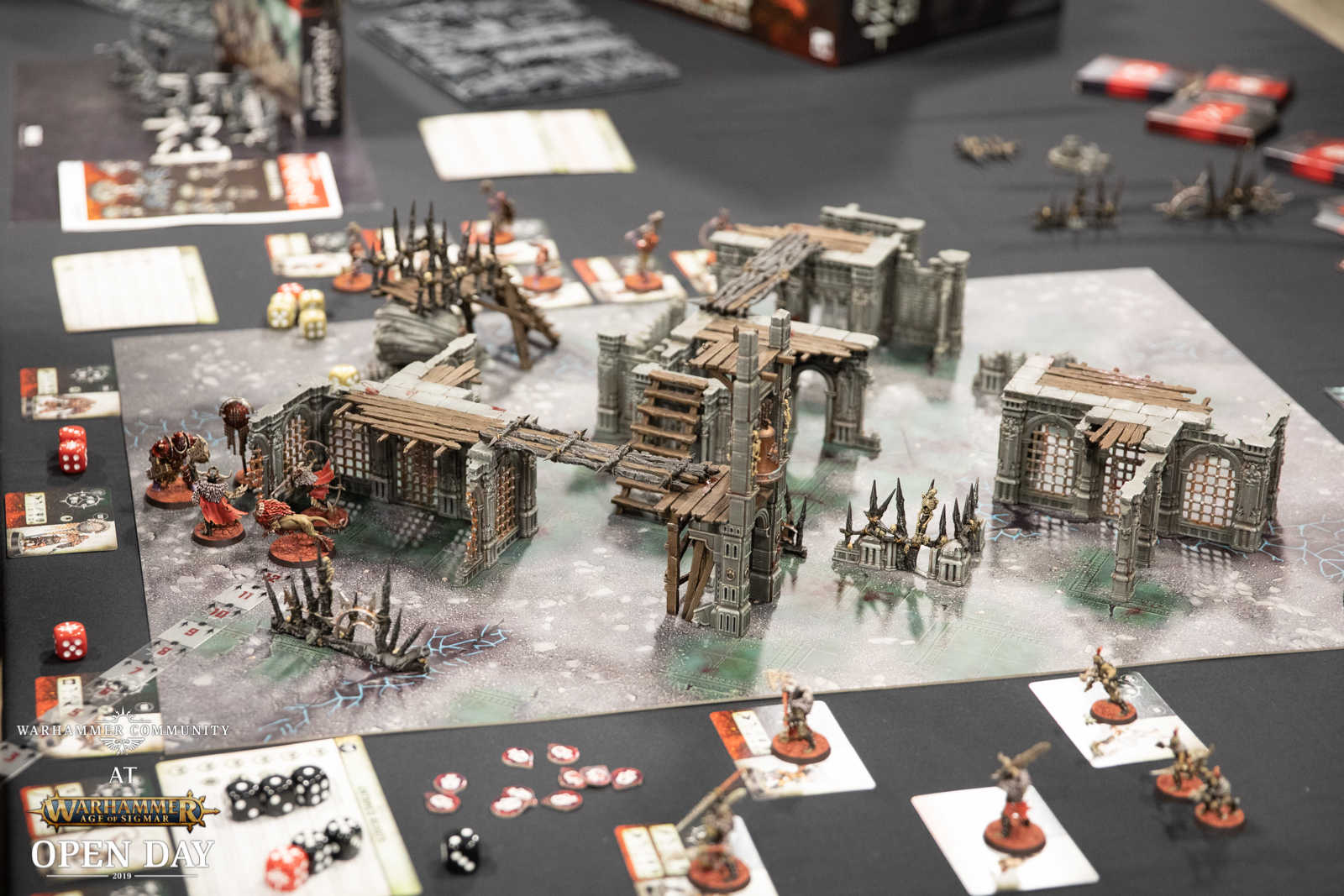 I wasn’t jealous at all…

At any rate, Warcry wasn’t the only thing going on over in Nottingham…

The next two Battletomes were announced, one of which I really didn’t think we’d ever see! The Orc factions getting amalgamated into their own book was a nice touch for sure, as it’s good to see the formerly-splintered armies finally coming back together in a sensible and cohesive way. This is especially true of the old Empire faction, which was hacked apart, much like the old elves, into several tiny factions which, overall, it seems was done simply to then eliminate portions from stock. Cities of Sigmar is promised as more than just the Empire re-imagined, however, as it instead re-forges the Empire, the Elves and the Dwarves into a single book! 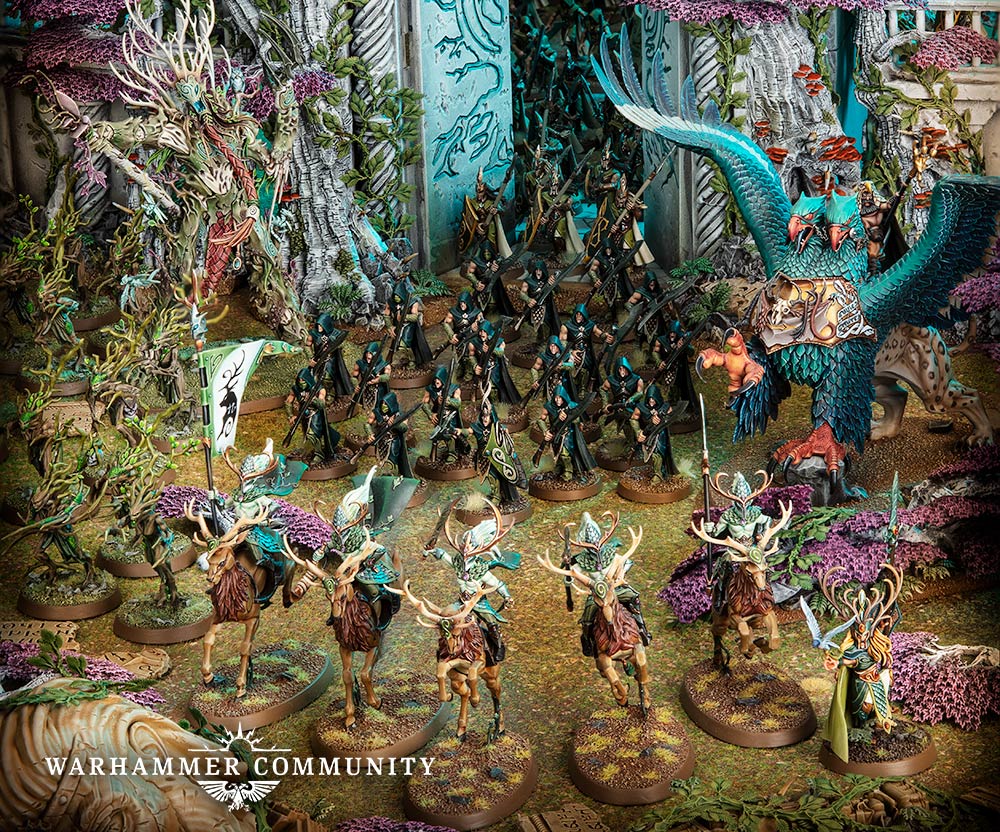 Cries of “Soup!” might well be warranted, but I’m hoping there will be solid plans in place to allow for an intelligent combination of these forces into a single cohesive army.

each City of Sigmar can enlist units from Battletome: Stormcast Eternals into their main force, while Tempest’s Eye and The Living City can draw on aid from the Kharadron Overlords and Sylvaneth, respectively, as full members of your army that share your allegiance abilities.

This has gotten me really quite excited, as I’ve been thinking for some time about trying to combine some of the old Warhammer Fantasy units with some of the new Age of Sigmar kits. Come back tomorrow for some of my thoughts on this! 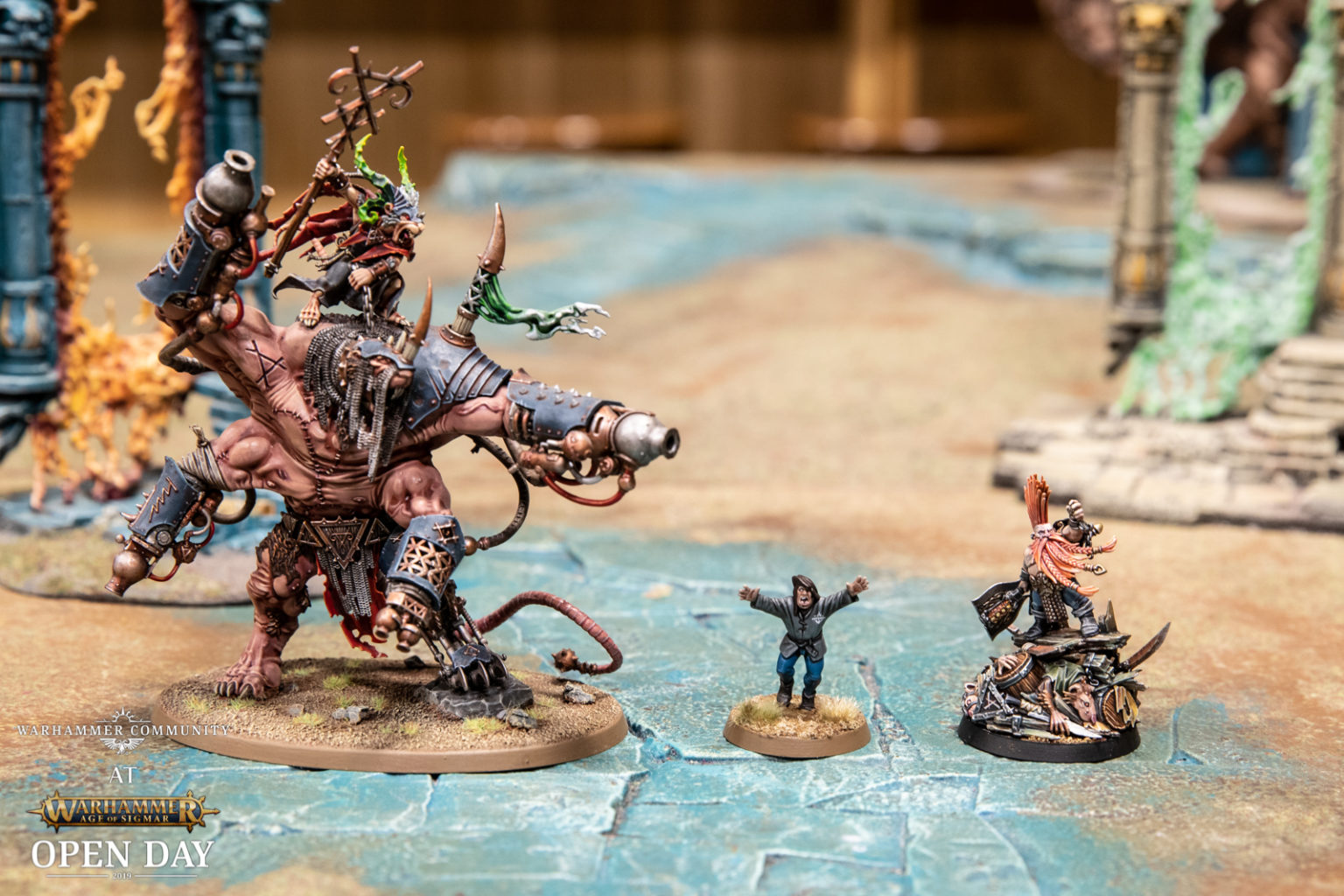 Legendary Slayer Gotrik Gurnnisson is finally getting the model that he deserves, standing atop a pile of dead Skaven. Nice. 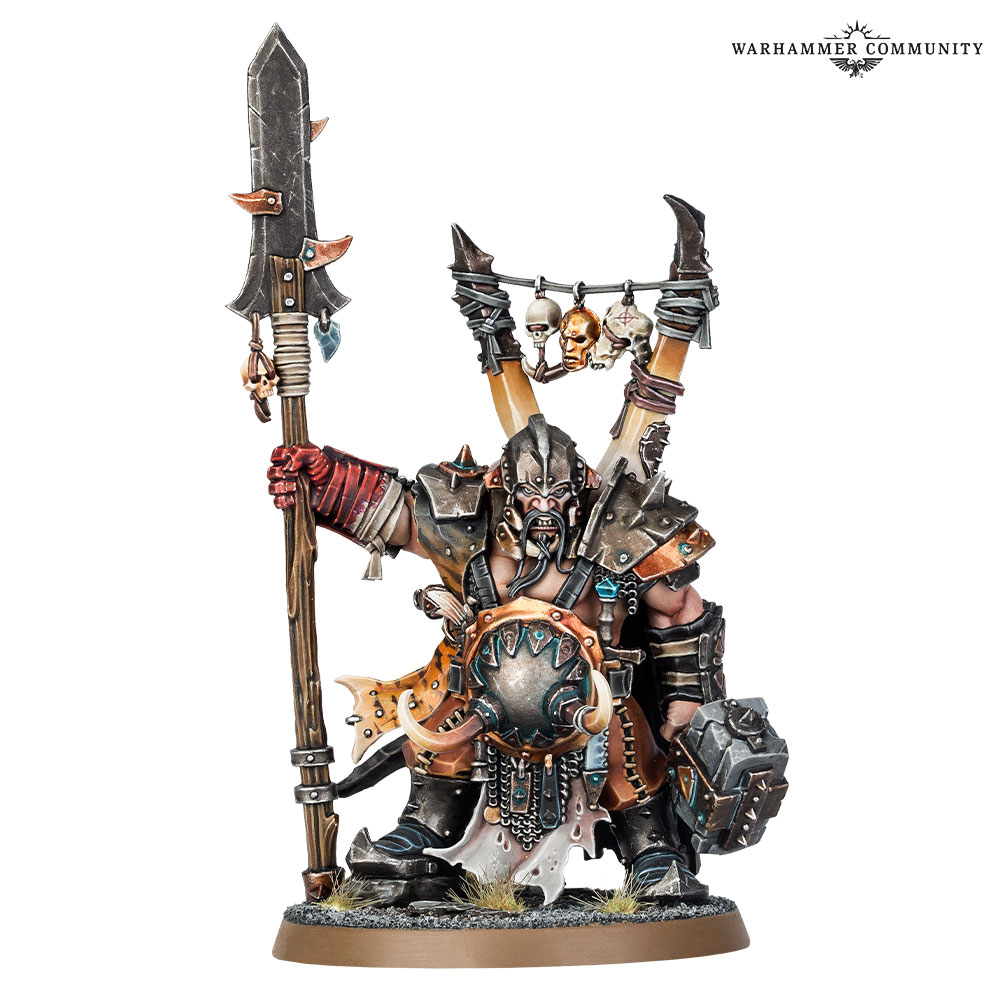 I did not expect this to ever happen! A plastic Ogre Tyrant kit?! He looks wonderfully menacing, as well, which is really good. Alas, I’ve cleared out all of my Ogres, so don’t have any need to buy this one, but if I were still collecting the fat dudes, I’d definitely be picking this chap up!

Exactly how he’s going to be packaged, though – I’m guessing it’s going to be something along the lines of Looncurse and Carrion Empire from a couple of months ago. Bring out a new Leader for a faction, bundle it up with a bunch of older kits, and watch the money come rolling in!

Feast of Bones – the new battle box coming for Age of Sigmar! Maybe…

Meanwhile, Warhammer Underworlds is gearing up for season three, and I still haven’t played a single game! I’ve got stuff all over the place for this (I blame moving house, but still) so I think it really is time I tried the game out sometime soon. It seems to have a good following at my local store, at least, so that’s a good start!

Centaurs? Could we be seeing entirely new factions for Age of Sigmar here, or simply new models for existing factions? Who the hell knows!

Finally – just what the hell is this all about? The Tithe of Bones? I’ve seen some speculation out there that the Tomb Kings will be coming back as a re-imagined AoS-style army, which would be incredible! Others think it could be Vlad coming back, or Krell. I’m not so sure, as I don’t think GW will be bringing back named characters anytime soon like this. So far, at least, it seems to have been mostly about creating new characters where possible, and the only named folks we’re seeing are the major players who came across at the very beginning anyway.

Re-imagined Tomb Kings would be so awesome. Death has got ghosts and it’s got zombies, and then there are the other bits within Legions of Nagash; it’d be really nice, in my mind, to have a faction of skeletons that forms a proper skeleton horde. Of course, TKs weren’t all about the skeletons and nothing but – rather, there were all of those constructs like the Necrosphynx and Ushabti. A skeleton army that features golem-like creatures could be really cool, and would allow for stuff like the Morghasts and Mortarchs to slot into the force quite easily.

Would it be too much to ask for a proper Deathrattle / Skeleton Horde? Possibly. I suppose only time will tell!

So there we go! I suppose for me, filtering out the Warcry stuff that was clearly the main focus of this event, the most exciting thing is this Tithe of Bones. I hope it’s basically a new faction release, and not the other half of that Ogres boxset that people have been speculating about!