It’s taken me almost a month to finish reading this book, but I feel like I need to point out that I haven’t been dragging my feet because the book is bad – far from it, it’s a really great 40k story in what I’m coming to think of as the “iconic” mode, as opposed to all of the throwaway stories that I’ve read in the past. But, as I’ve said already, I’ve been moving house, so time has been at a premium!

Plague War follows on from where Dark Imperium finished off, with the stage set for a Guilliman vs Mortarion showdown. In many ways, Plague War is a much better book, as it doesn’t really come with all of the baggage of the new edition that its predecessor had. Rather than reading the book to find out what would be in store for the new Primaris range, we can instead enjoy it on its own merits, and while I think I’ll most likely re-read them both when the inevitable third part comes along, I do think that the second act is definitely stronger.

The first couple of hundred pages feel like they are very deliberately setting the scene for the showdown on the planet Parmenio, presenting us with a number of small vignettes focused on several major characters to the story. We meet Frater Mathieu, who has settled much more into the role of Militant-Apostolic to Guilliman, and is continuing his schemes to make the Primarch a true believer in the divinity of the Emperor. We follow the Guard, as always, alongside some Sisters of Battle as they investigate the presence of a potential Imperial Saint in the city of Tyros, who first appears at the turning point in the battle against the forces of Nurgle. We meet several of Nurgle’s daemons, we catch up a little with Mortarion, and we also get to catch up with the Primaris marine Justinian Parris, who is seconded to the Novamarines following the events of the earlier novel. It’s all a little bit of a jumble – Guilliman himself doesn’t even appear until well over 100 pages, to take delivery of a curious strongbox.

While Mortarion is cooking up something particularly disgusting on Iax, which we got some clues about in book one, his feint on Parmenio is intended to bring Guilliman to his knees, and so the main portion of the book deals with the battle there. There’s only so much disease, filth and ichor that I can really take, but nevertheless, I felt it was somewhat toned down compared with previous Nurgle-centric novels. The Novamarines manage to destroy one of Mortarion’s clocks on the planet, which means that when the daemonic incursion takes place, the Neverborn are at a distinct disadvantage, due to the lack of any Warp power on Parmenio. They still put up a good show, of course, and Guilliman is almost destroyed by Mortarion’s scythe Silence, but at the crucial moment, the Battle Sisters bring the Saint onto the field of battle (defying Guilliman’s express orders) and her mere presence manages to send most of the daemon’s back to the Warp. Mortarion escapes to fight another day, calling out to his estranged brother to follow him to Iax and pretty much setting up the third novel, and the Imperium forces are left to gather their thoughts and their dead.

The fairly ambiguous end sees Roboute Guilliman open the strongbox, and begin to read possibly the only remaining copy of Lorgar’s Lectitio Divinitatus.

I said before, this is a much more enjoyable novel than Dark Imperium, and I suppose part of that has to do with how I approached reading the earlier novel. There is still an element of seeing these sorts of novels as miniatures catalogues, although there aren’t any new miniatures hinted at that I recall. The Astraeus super-heavy tank gets a mention, though, which I suppose was new at the time this book came out!

The novel did feel a lot like a short series of disjointed events for probably the first half, which didn’t really help me get into it too much. It became easy to pick up and put down after a single chapter, rather than wanting to read through for a good period of time. Nevertheless, once the story got underway, it was very enjoyable – though my personal disinterest in Titan warfare meant a particularly long chapter about 3/4 of the way into the book was just tedious to get through.

I thought it was really interesting how the Imperial Saint, Kaylia, was handled, though. She seems to have been just a regular girl who happened to have, to all intents, the Emperor act through her, bringing the cleansing light of His majesty to the disease-ridden battlefields of Parmenio. One of the daemons actually refers to her as “the anathema”, their word for the Emperor, though once this power has proven to be too much for a mere mortal to contain, and she expires as a result, Guilliman writes her off as an unsanctioned Psyker and berates Mathieu for planting the seed that enabled the Battle Sisters to take possession of her. The war between the Primarch and the Ministorum is clearly not over yet!

I do wish that more had been explored of that, but I suppose it’s possible that we’ll see more of it in the next book, which I hope will follow up on a lot of this stuff. Will Roboute Guilliman become a believer? I don’t know what to make of it – and I really don’t know what to make of him. Throughout this and the last book, we are led to believe that Guilliman, once he had come out of stasis thanks to the help of the Ynnari, had a chat with the Emperor on Terra. During the confrontation with Mortarion, however, it is implied that Guilliman did not, which makes me wonder what’s going on there. Is he trying to create some kind of cult of personality around himself, and maybe eventually declare the Emperor to be dead at last? I think he is now aware of the reasons for the Primarch project, and their eventual redundancy, so maybe his loyalty has shifted a little. I’m not trying to say that he is about to fall to Chaos, of course! I’m just wondering if we might be setting up for a further schism on the side of “good”, with the Ministorum heading up a pro-Emperor faction, and Guilliman at the head of his own? Like an Imperium Secundus, but for the modern age? Who knows!

I was a bit disappointed by the actual Guilliman/Mortarion confrontation however, and while inevitable, the fact that pretty much all of the Nurgle commanders escaped to fight another day was disappointing. I suppose it’s difficult to have such a confrontation where, presumably, the author isn’t allowed to kill off such a hugely important character (with a £90 miniature that was only released a year and a half ago…) In addition, the battle involving Typhus was almost entirely a bit of a sideshow, and I can just imagine the Herald of Nurgle twirling his moustache with a snicker and a “until we meet again!” 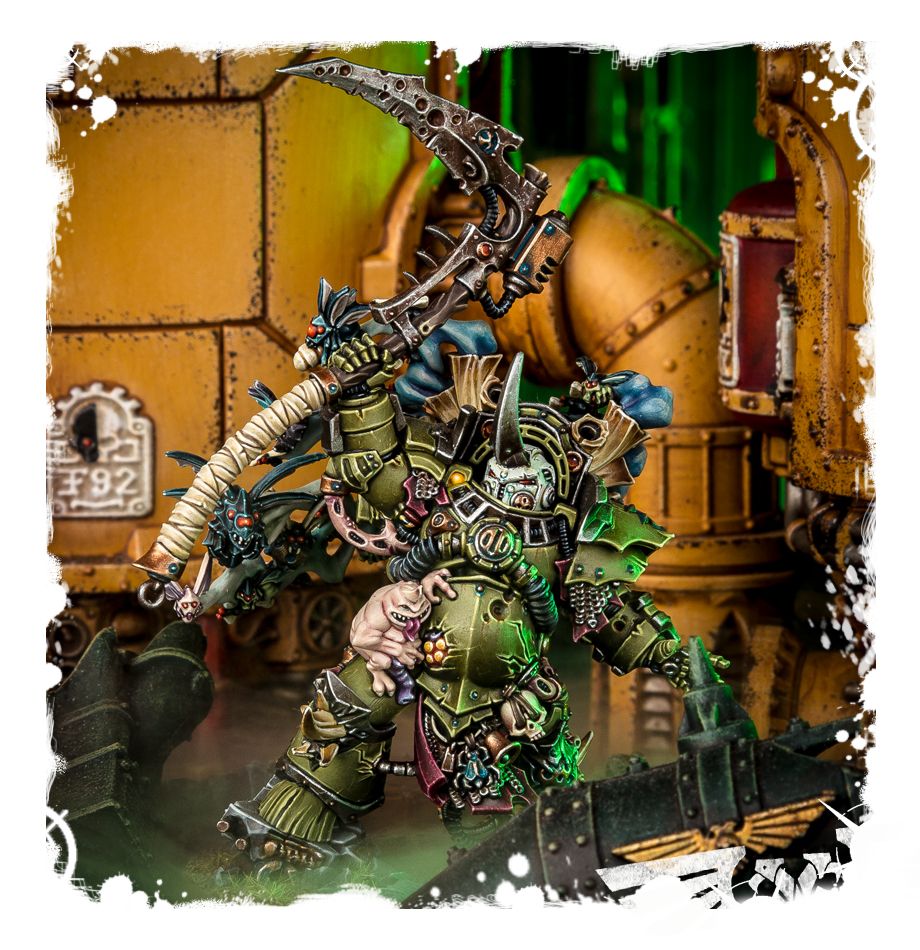 “You haven’t seen the last of me, muchachos!”

Overall, it’s definitely worth the read, although as the second part of a trilogy it both benefits and suffers, by having a decent story to build out from, albeit with no real sense of closure quite yet.