Hey everybody!
So I’ve picked up some of the new shiny stuff for Kill Team, and thought I’d come along here to ramble about these expansions, and just how much I’m actually quite excited for what they bring to the game! 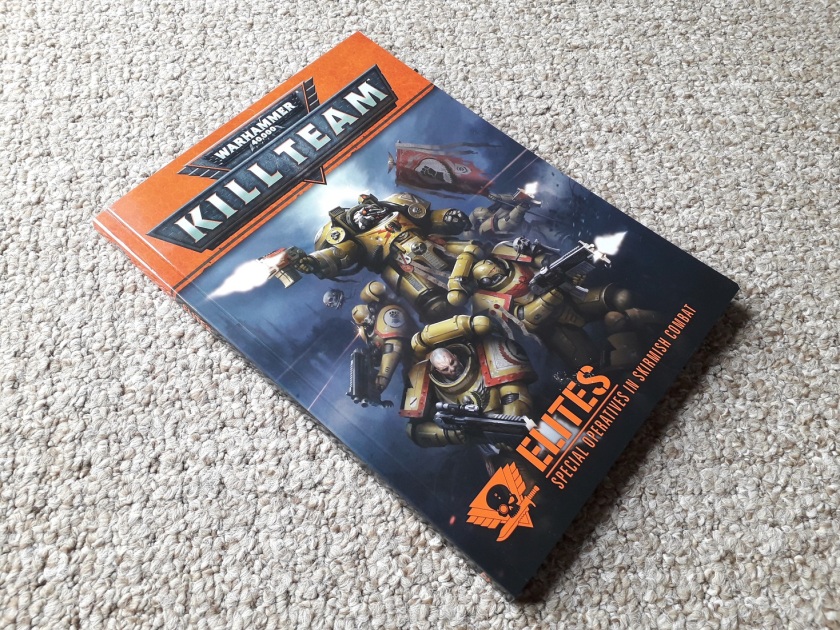 First of all, let’s take a look at the new book, Kill Team: Elites.

This is quite an incredible book, with the rules for using Elite model choices in the game only half the story. There are 67 datasheets in the book, but 30 of them are new Commanders, some of which are actual named characters from the lore such as Sly Marbo, Darkstrider and Illic Nightspear. That was really quite the surprise to me, if I’m honest, as I was expecting a similar situation to the core book, where we’d just get a progression of Elite choices and that would be it.

Not only do we get these, but we also get the sub-faction rules that now permeate regular Warhammer 40k, such as Chapter Tactics, Cult Creeds and T’au Septs, etc. This was something I really hadn’t thought to see in Kill Team, but it is quite nice to see this game closely mirroring the regular tabletop game. Sure, there are people who are no doubt calling this 40k by another name at this point, and I think the more rules that get bolted on to Kill Team, the closer it is going to become. But there are now a myriad of different ways that this game can be played and enjoyed, so I don’t think we need to be calling it anything just yet.

I do find myself wondering just where this game can go, if I’m being perfectly honest, as it is already running the risk of getting silly. What I mean is, what will the next expansion be? We now have troops, HQ choices, and elites playable in the game. We’re left with fast attack and heavy support, and while I can see a couple of these porting over quite well into the game, I’m starting to feel like the cynics are correct, and this could well just be re-named 40k lite. There are fundamental differences of course, and I do quite like those, but so far as expandability goes, I’m not sure where the game can go.

Within the elites book, we get pretty much all of the contents of Shadowspear as playable units, which may well provide a hint as to what is next in store for Kill Team. Rather than going down the route of allowing us to use Space Marine Devastators or Drukhari Reavers in the game, maybe we’ll just get updates for it every so often when new box sets come out. I know we’ve had the free pdf for the units in Blackstone Fortress, and maybe we’ll get that sort of thing rather than hard-copy books to buy. But that does feel like the main support for the game is going to just die off.

The other way for the game to continue, as far as I can see, is tied into the long-rumoured Inquisition vs Daemons expansion. Along the lines of last year’s Rogue Trader expansion, maybe we’ll get a book that provides a system for making up even more bespoke kill teams, which will look similar in style to those found in the Rogue Trader expansion. I’ve talked about this before, of course, and as I think about it, it’s something that I keep coming back to as being a potential for keeping the game alive. 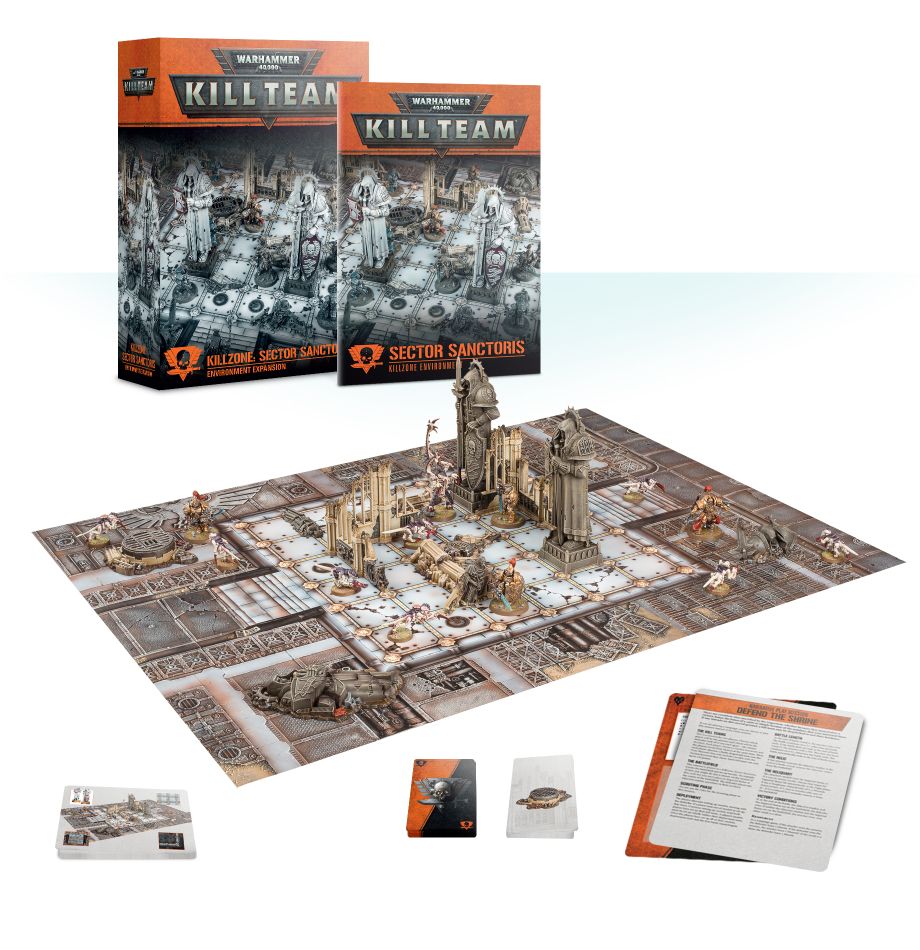 I don’t want to come across as being down on Kill Team, of course, just a little intrigued, maybe confused, by where they could be taking this thing next! Of course, one way that has worked out really well for them so far is the Killzone environment expansions, and while the most recent release in this line hasn’t had quite as much good press paid to it so far, I do find myself actually really enjoying it – indeed, whereas with others in the line I’ve just bought the boards and cards off ebay, this is the first environment that I’ve actually sunk my teeth into in its entirety!

Sector Sanctoris combines some quite disparate scenery pieces into one box, and currently retails for £50 like the others. Within the box, you get the two Imperial statues that were formerly available in the Basilicanum terrain set; the walls from the Sector Imperialis set, and the scatter terrain that came out in Urban Conquest earlier this year. There is also a short pamphlet with some background/fiction set around Imperial shrines, a short construction booklet showing how to build the scenery, and the environment card, mission cards, and tactics cards. People have been decrying this online for not being as good value for money as other sets, but I think this is such a subjective argument that I find it difficult to agree with. I really wanted that scatter scenery, and it would have set me back £60 to buy Urban Conquest. So I’m already up on the deal buying it this way. 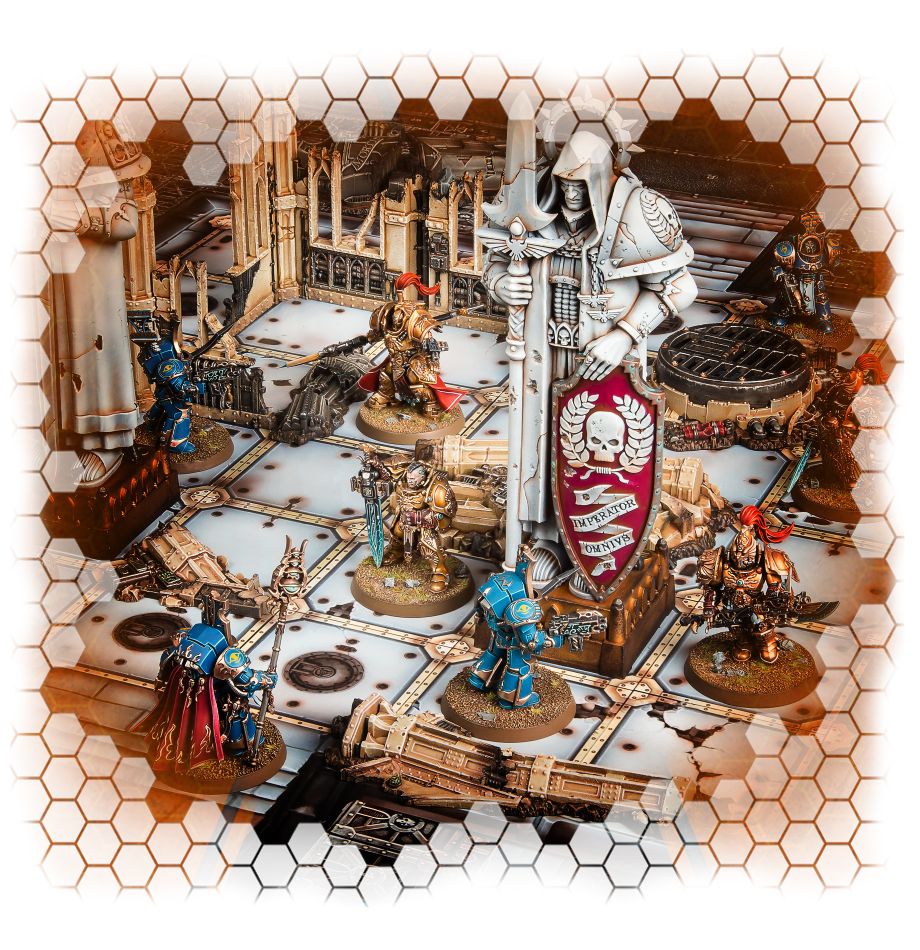 The set comes with the standard set of tactics cards that can be used by players using this killzone, as well as four mission cards (two for matched play, two for narrative play) and a killzone environment card that can add some extra effects to the game. As can probably be expected from a set focused around Imperial ruins, these effects tend to bolster factions under the IMPERIUM keyword. Even if you aren’t running Imperium factions, though, I do feel that the terrain is just so cool and so iconic – and blends in so well with that from the core set – that it’s really going to be worthwhile getting this one for the collection. Indeed, of all the killzone environment expansions released so far, this is probably the best one to pick up to complement the core set for the fact that they both use the new style Sector Imperialis terrain. 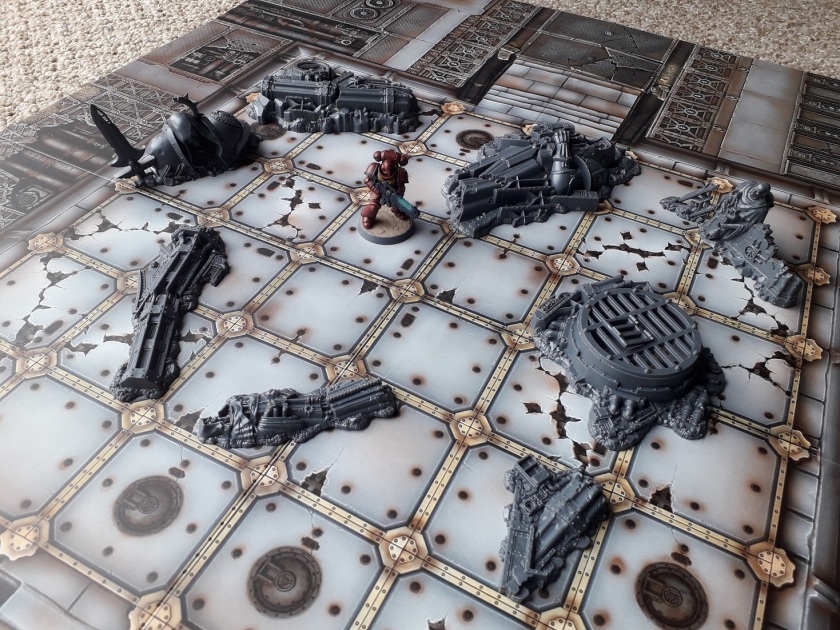 I’ve only built up the scatter terrain so far, and even just having that on the board, it’s quite wonderful. I say “built up” like it was a complicated job – only two of these pieces actually have to be assembled, the rest is just clipped off the sprue and away we go! The terrain pieces are quite huge, as you can see in the photo above, and are really quite detailed. It’s definitely a chunkier plastic than the usual stuff, very similar to the other terrain we’ve had now, but that doesn’t really detract from the overall effect. I’m definitely looking forward to getting this lot painted up, probably with the new contrast paints when they come out, so I can give some colour to my games. I think I should finally be able to paint all of that Sector Mechanicus scenery that has been hanging about unpainted all these years once I get those new paints, as well!

Should really try to make a start at getting this lot finished, really… #Warhammer40k #SectorMechanicus #terrain #scenery

I am definitely a terrain fan, though, and I think it’s a very important component of the hobby for me. It’s something that really brings the setting and the game to life, and so I might place a little too much import on actually getting terrain, collecting it and (hoping to one day start) painting it. Boxes like this are just wonderful, and while I could have picked up one of the army boxes like the Scarab Occult Terminators and gotten that scatter terrain that way, I already have those chaps, so it was either a case of buying more or else getting this and having all of the additional scenic bits, the cool add-ons like the cards, and of course the board to play on.

While I have no real clue how GW are going to set about expanding their line of Kill Team to keep the game alive and fresh, I think environment boxes like these, and then perhaps campaign books that might give us some rules for prescribed Teams, are likely going to be the way forward. I could well be wrong, but I’m very interested to find out, regardless.