“I’m basically still doing what I was doing aged five, drawing spacemen, bikers, superheroes and monsters, so here’s a book full of them!”

The Big Kopinski is the first volume in a series collecting sketches by the artist Karl Kopinski, who you will likely know from his work on the card game Magic the Gathering. I mean, that’s certainly from where I was familiar with the guy! Among so many other iconic images for that game, he also produced the wonderfully evocative artwork of Liliana that was used as both box art and playmat art for the Innistrad set, and is without a doubt a classic rendering of the infamous Planeswalker.

I started to play Magic seriously around the time of Origins, and learned the basics of the game from watching Spellslingers season 2, as well as playing via the Android app. The app uses a number of cards from M15 and earlier, and playing a black/red deck, I became familiar with Kopinski’s style though a lot of these cards. That Goblin token in particular is one that I feel should be on my Christmas card list, I am so used to it by now!

There is definitely something evocative about his work, particularly seen in the Temple of Silence art, but also the lighting in both Gatekeeper of Malakir and the Rakdos Drake – the use of light to create an imposing shadow is particularly striking, don’t you think? There are elements within the Rakdos Drake art, but perhaps moreso in the Blood Cultist art, that show a kinship with the grim darkness of the Warhammer universe (and, of course, that of Warhammer 40,000) – unsurprising, given that Karl has also worked for Games Workshop over the years. His style is definitely more veiled than that of the archetypal Warhammer artist, John Blanche, but it still lends itself perfectly to the setting. Perhaps unsurprisingly, he numbers artwork for Chaos among his work in that franchise, although is not averse to drawing the defenders of humanity, too: 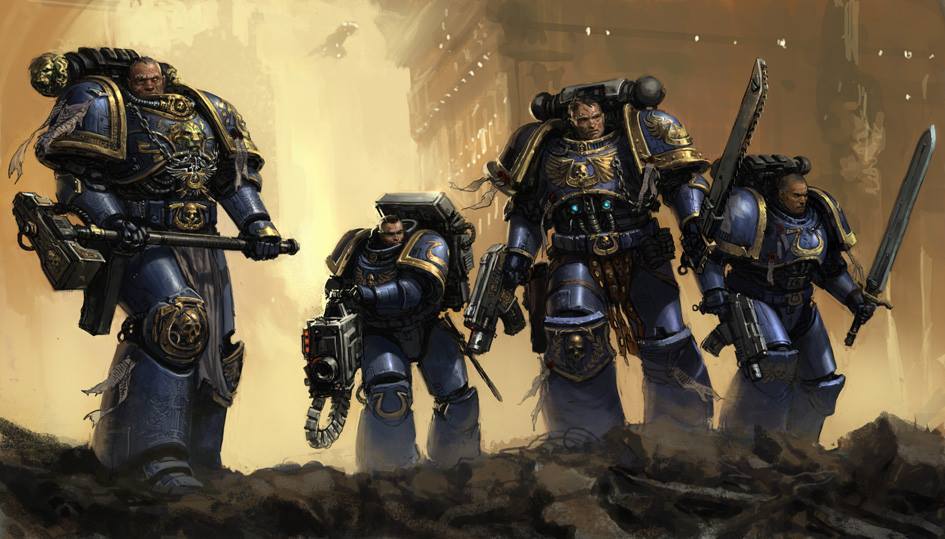 But let’s look at the book itself.

Like I said, it is principally a book of sketches that range from the fantastical and the futuristic to the more mundane and the realistic. It’s a fascinating collection of drawings that is an utter delight to leaf through. Even if you aren’t familiar with the man’s work, it’s a really nice book that is a treat for the senses, one that you can lose yourself in as you study the worlds created on the pages. I was really taken by that guy dragging the demon-head, shown above, imagining all kinds of scenarios it could be illustrating!

(As a side note, they are also lovely pages, with a very nice, soft feel to them – just in case you’re interested in that sort of thing!)

There are a lot of fantastical, sci-fi bikers in the book that look a lot like they have strong design elements of the Izzet League from MtG. And there are also superheroes, including the humerous older Batman shown above! But the most arresting image, to my mind, has got to be this hulking goblin character: 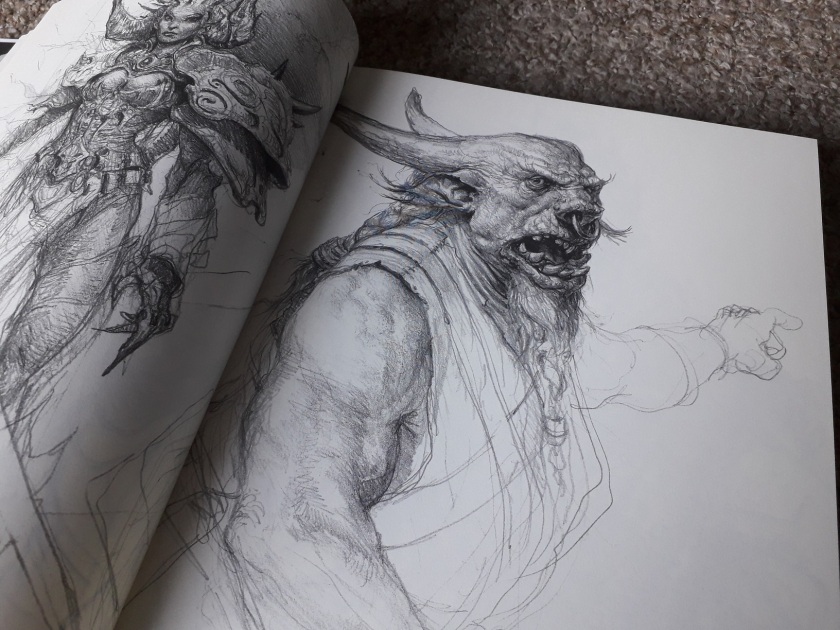 This is truly a fantastic piece of artwork, whether you think it unfinished or not. That face! The textures Karl uses on the skin feel so real, and the detail just brings this piece to life off the page. I couldn’t help but gaze intently at this dude, again, imagining all manner of worlds and situations he could inhabit. It’s just fabulous, and a really great example of the hundreds of others across these pages.

Now, I’m not an art student, but if you’d like to learn more about Karl’s work with a focus on the MtG stuff, you won’t go far wrong by checking out this video from The Magic Man Sam:

You can see more samples of his work (and purchase any you like the look of!) from his website, here.

I am very grateful to the publisher of this book, editions caurette, for sending me a copy to review here on my blog. All of the sketches used to illustrate this blog were taken from the book, as was the quote at the top of the page. You can pick up a copy of The Big Kopinski direct from the publisher, here.