Hey everybody!
It’s the second blog in my mini-series of posts looking at how I can increase the size of some of my 40k armies to 1500-points and play some larger-scale games with them. Since 8th Edition arrived, I’ve not really looked beyond 1000-point games, but I feel like I might be missing out on some opportunities when limiting myself in this way. I’m therefore looking at how I can build on the core of an army that I already own, and raise the bar a little to allow for an expansion. I’ve already looked at doing this with Tyranids earlier in the week, so today it’s the turn of the robot-men from Mars, the Skitarii! 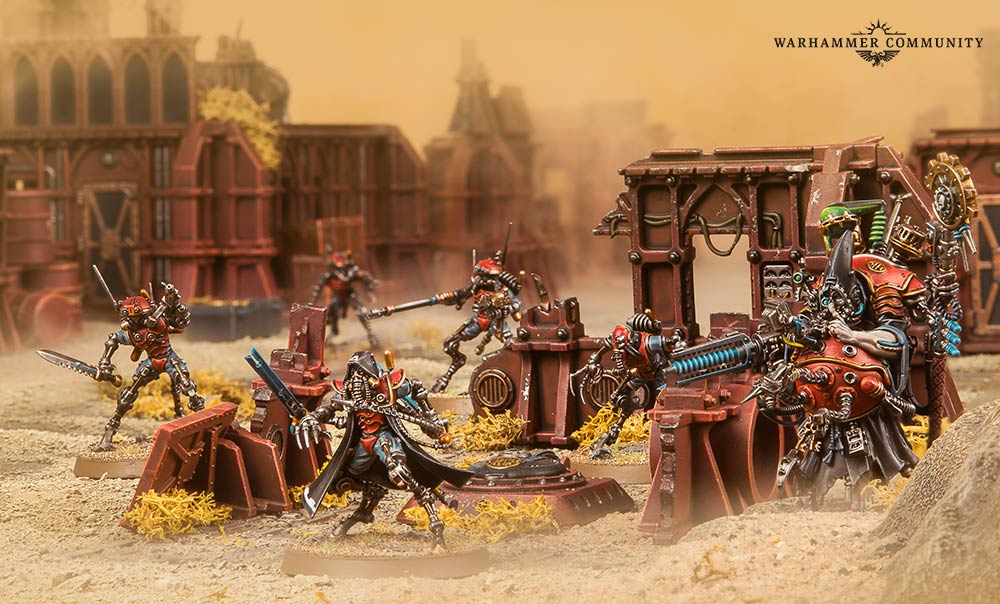 While I have off-and-on been looking at Skitarii for a number of years now, I’ve recently renewed my interest following the possibility of entering a doubles tournament this summer. I’ve previously blogged about this when I was considering going down the Deathwatch route, but have since switched gears to Skitarii, thinking it would be the perfect excuse to finally get this army off the ground and onto the tabletop! Around the same time, GW released an expansion for Kill Team, Theta-7 Acquisitus, with the new Tech Priest Manipulus model, and building him up has somewhat springboarded me into making a renewed effort to paint the models I have lying around!

I’ve talked many times on this blog about my plans for a Skitarii force, and pretty much every time I keep coming back to the same idea: waves of Skitarii foot-soldiers walking across the battlefield with implacable force. Sadly, this idea is not going to really stand up to the scrutiny of a game, Skitarii on the whole being quite weak in terms of Toughness and Saves. The 6++ is going to be handy of course, but in order for this to be a viable option, I do feel that the army would need to have a lot of models to survive such an action! And so, on that note, let me present my list!

I’m fairly happy with this list as it stands right now. I’ve got a good spread of units, with pretty much everything organised how I’d like it. There is a battalion in here, as well as a spearhead and a vanguard detachment, so I’m starting the game with a good number of command points.

Let’s talk first about the Tech Priest Manipulus. I can’t deny, the main draw for me to using this model is the fact that he’s new, and I’ve been a bit seduced by the shiny. I’ve chosen to equip him with the transonic cannon, an Assault D6 flamer, as I feel he’s going to be getting more into the thick of things than any of the other HQs. I can see him being screened by the Sicarians of both flavours, and using his Galvanic Field to help improve those units around him. The Sicarians are something of a new unit for me, as while I’ve previously built some Ruststalkers with transonic blades, I’ve never before now actually included them in the list. I’m hoping that the Ruststalkers can go around with the Manipulus, and the Infiltrators perhaps just appearing with their infiltrate move when the stars align, and everything can start wrecking face. 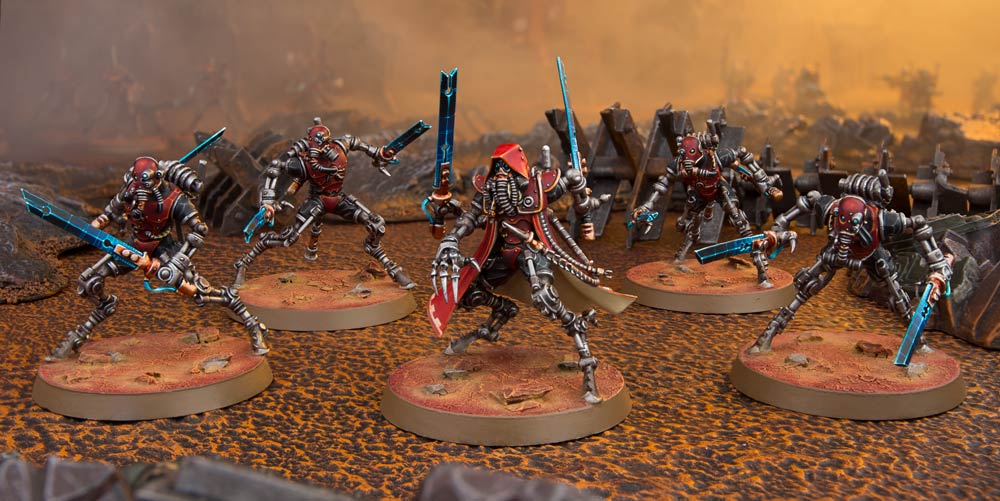 There are a lot of troops in this list – 43 of them, to be precise! The additional three Rangers have been thrown in simply because I had the points left over, but between all four units, I should be able to achieve a good number of shots. I’ve only got one transauranic arquebus, and am otherwise relying on either the cheaper arc rifles, or the plasma calivers to add some spice to the proceedings. Of course, Vanguard are the more lethal of the two, with their basic guns Assault 3, so the arquebus unit will be able to dish out 24 shots at 18″ – they are only S3, for sure, but my theory here is to just drown the enemy in shots in an attempt to ensure that at least some get through. Indeed, this is really the theory behind most of this list, trying to get maximum number of shots out of everything, and force too many saves that should see a good number of shots get through.

In ideal circumstances, the whole troops section should be putting out a combined total of 93 shots. Granted, that is including the pistols that each Alpha is equipped with, so I’m assuming that these shots are coming from 12″ away – not the sort of distance Skitarii want to close to! – but even so, 93 shots will see a good number getting through because of the sheer volume of saves being forced on the opponent. And that’s just from four units of troops – there are 15 shots coming from the Corpuscarii, the Kastelans can theoretically put out 36 shots with the right Protocol in place, etc etc. 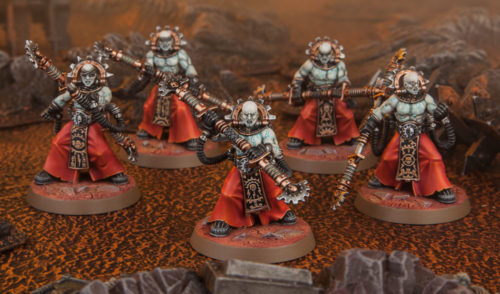 In my head, the army is definitely a gun-line, shooty list. But I’m not neglecting close combat, as already mentioned with the Sicarians, but also I’m including some Electro-Priests, by far some of my favourite units in the entire AdMech army. I really don’t know how well these chaps will fare, as I hear so many mixed reviews of them, but I’m not going to give up on including them in the list before I actually try them out. I’m using both flavours, so it’ll be interesting to see which kind will be best, as I do have a third box waiting for me to build… 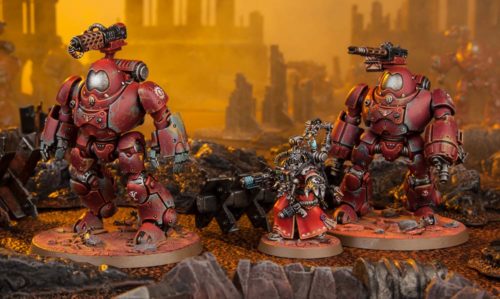 One of my favourite 40k youtube channels is StrikingScorpion82, and I really enjoy his video series where he looks at an army and goes through tactica on a selection of the units therein. For the AdMech, he talked about building an army that centred on an Imperial Knight, the idea being this is an army of machine-worshippers, so why not include at least one of those machines in the list? Well, I’m not a big fan of Knights, so instead have gone for a pair of Kastelan Robots as well as a duo of Onager Dunecrawlers as the central focus of my army, led by a pair of Tech Priest Dominuses (who I imagine to be brothers, for some reason). 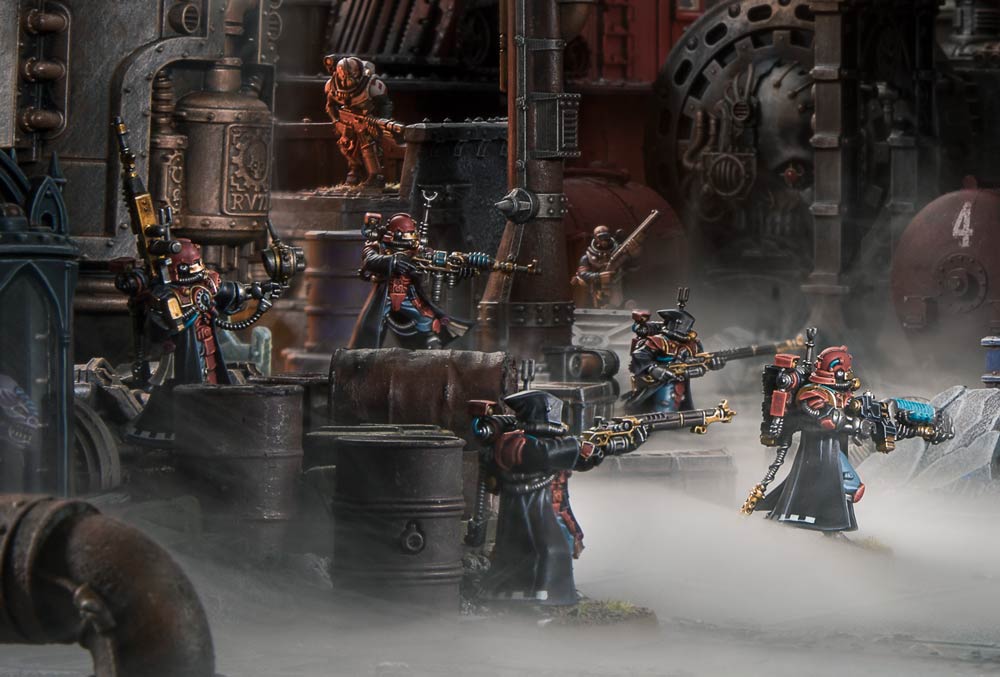 You might be wandering, then, just how I’ve organised these half-man, half-machine killers. Well, I’ve gone for Ryza as my Forge World, having painted up my army so far without a specific Forge World’s colours in mind. It’s a choice that I made last year, when I was trying to inspire myself into doing more work on these guys (though sadly didn’t work at the time!) The dogma allows for re-rolls of Hit rolls of 1 in the Fight phase, which is partially why I feel somewhat safe including such a high number of close combat units in the list. The unique Ryza stratagem gives +1 to wound and +1 damage for all plasma weaponry, which is admittedly not being used to great effect within the list as I only have three such weapons, but I think there will likely be more targets for my CP expenditure across a battle. Finally, I have gone for the Ryza warlord trait on the Tech Priest who wields the eradication ray, giving that weapon +1 strength and +1 damage. Should be handy!

His brother Tech Priest is wielding Weapon XCIX, which improves his volkite blaster a bit. Without trying to over-think these things from any kind of competitive standpoint, I actually like a great number of these relics, and can see myself changing this a number of times as and when I get to play with the army.

Overall, I’m quite pleased with the list I’ve come up with. I do still need to build a few pieces for it – notably the Infiltrators and second Dunecrawler – as well as painting the vast majority of it! Though I’m definitely further along in that respect than I am for the Tyranids list I talked about on Monday. I’m currently focusing on trying to get my infantry painted up so that I can actually base them – I paint inside the robes etc first, so don’t attach them to the base until at least that part has been done, which does mean it’s a while before I can actually get these folks on the table. But even so, I’m enjoying the process, and I’m definitely looking forward to having my first playable Imperium army ready soon!

One thought on “Going Bigger with Skitarii”