Hey everybody!
So I’m a little late to this party as well, but given the amazing line-up of new stuff that we’ve seen previewed at the New York Toy Fair from GW. I’ve come across quite a bit of negativity towards some of these things while looking around at the online reaction, which is a bit of a surprise to me in some respects, but I suppose you can’t please everybody! At any rate, let’s dive in and take a look at some of the upcoming goodness: 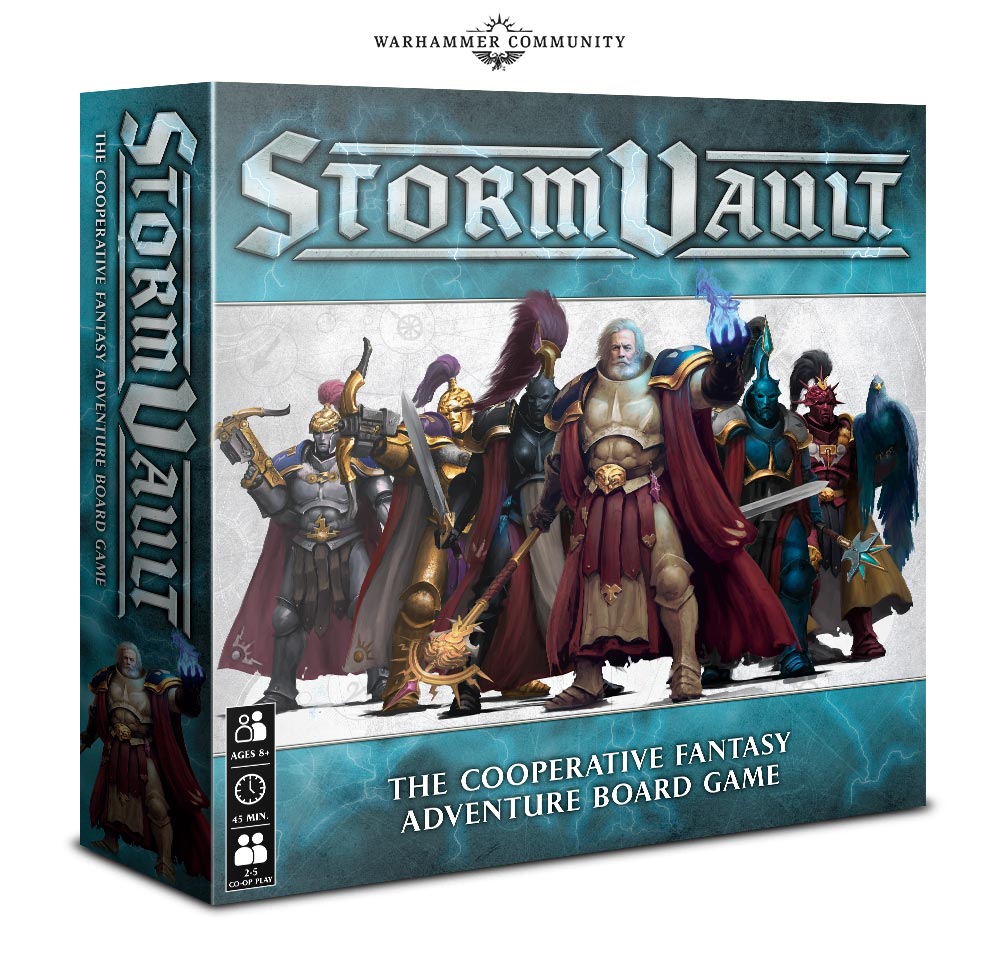 I want to start with Storm Vault, a co-operative dungeon-delving game that looks like it only includes Stormcast Eternals as the playable heroes, from the look of the box. I originally wasn’t even sure if it was a miniatures game, as I couldn’t see any in the promotional shot of the game board, but I think they’re up there in the top right corner: 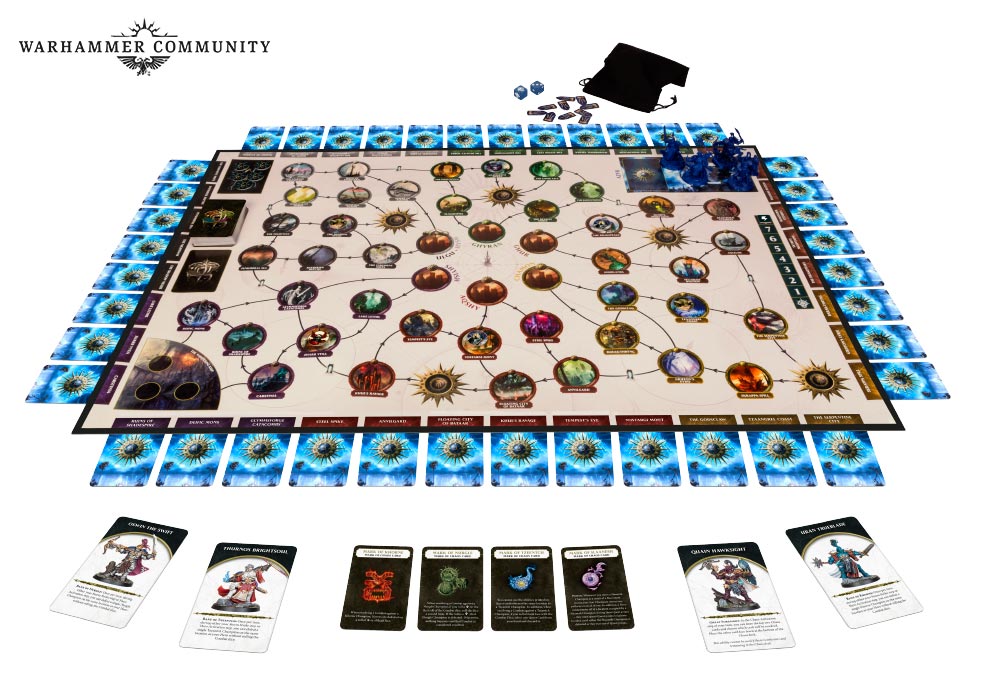 This does look kinda neat, and reminds me a lot of Talisman, for some reason. They’re both GW IP games, I suppose, but it has the feel, from the scant info we had revealed, of that kind of adventure game. It looks like the four Chaos gods play a part in the proceedings, too, which is interesting… 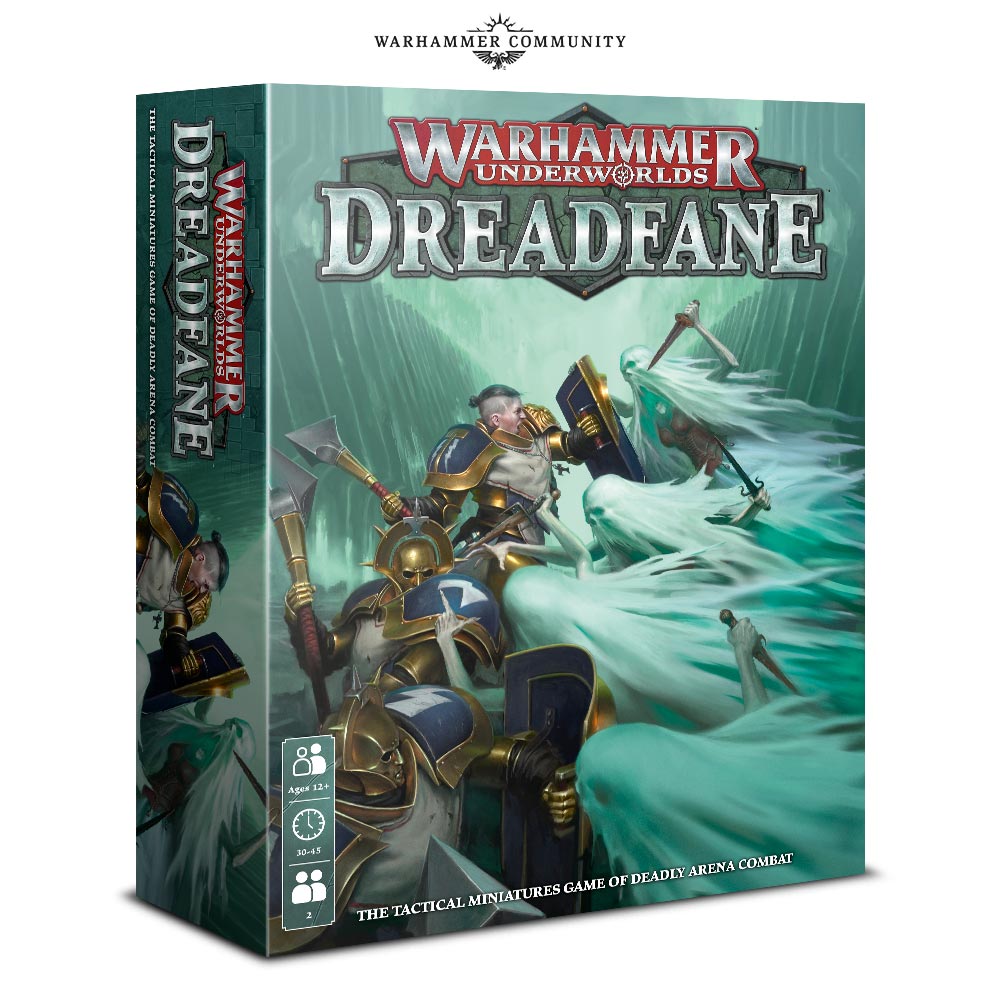 I’ve still not played Warhammer Underworlds yet, shame on my, but this seems like an interesting take on things. Aimed at new players for the game (so, me) it features what looks like two of the Easy-to-Build kits for Age of Sigmar made into warbands that can be used here with training wheels, and then taken further into the main game. I do love the Nighthaunt, after all, and I am looking to get into Shadespire/Nightvault, so I think this could well be a good buy. 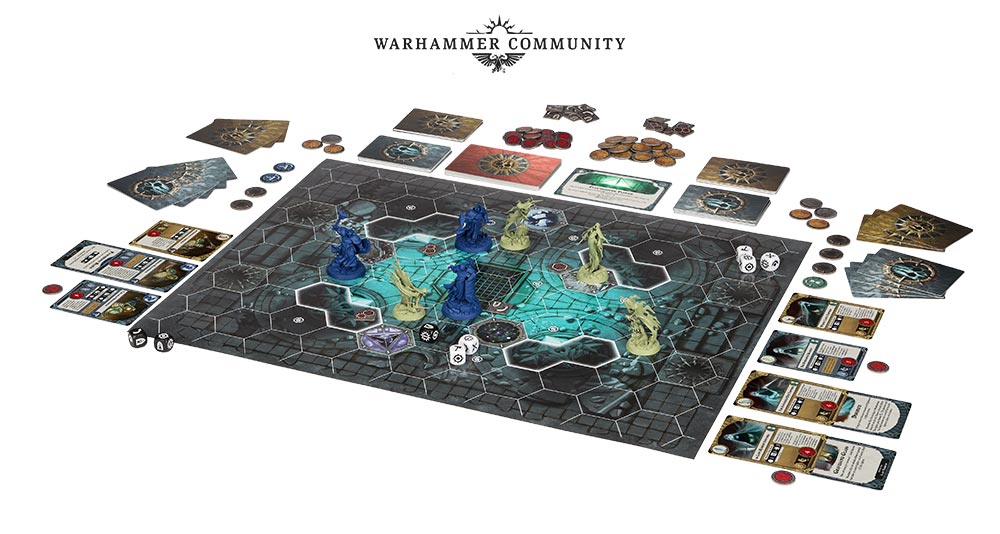 I do see the perspective of those players who already have been playing the game, and perhaps begrudge having to get this if there are unique cards that they will no doubt need for more competitive deck builds, but I think all too often we’re bound up with the loud voices here online who decry such enterprises by game companies – all the while, without realising that they just aren’t the majority target audience for this sort of product.

While there was also talk of the new Funko Pop range, and this Space Marines Heroes thing, by far the most interesting and exciting announcement to come from the event was, of course, this: 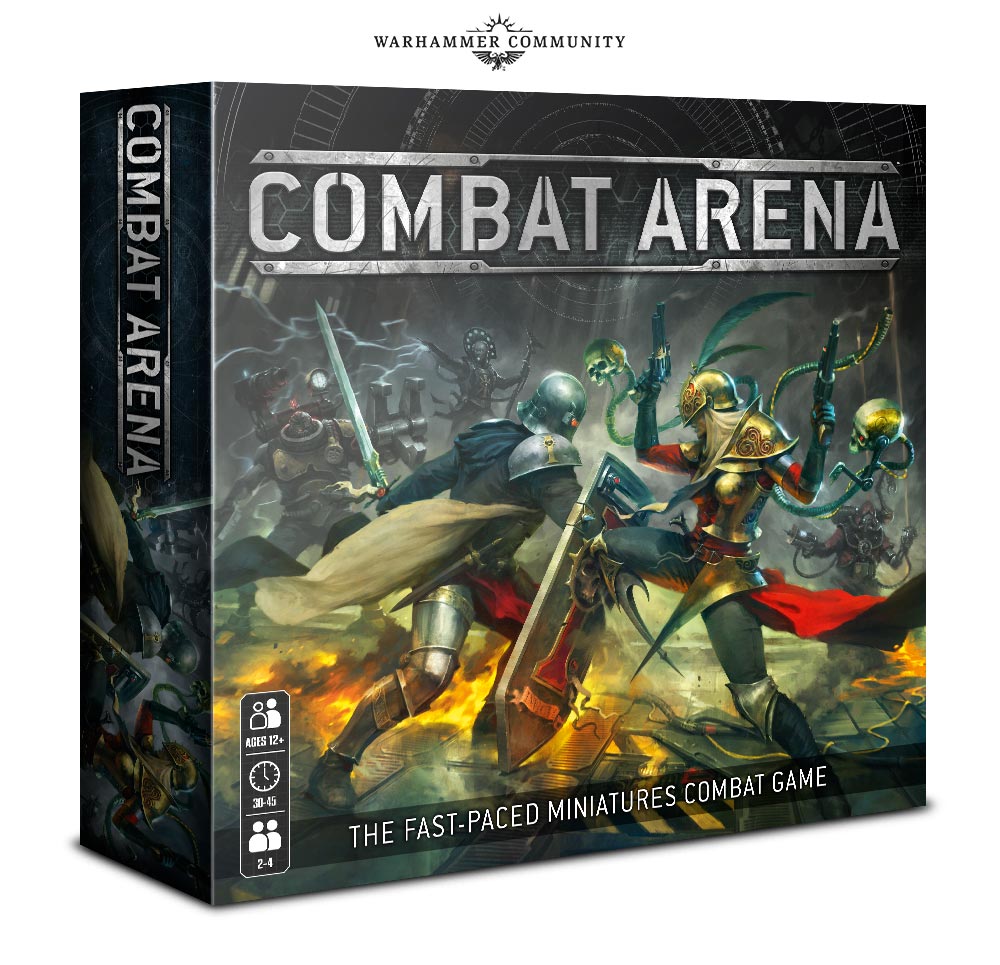 Combat Arena appears to take the principle of Gorechosen and supplants it to the 41st millennium, with generic hero-types being thrust into a pit-fight set aboard a space ship. All of them are Imperium heroes, and so a lot of people seem to be a bit confused as to why such folk would be fighting one another, but there we have it. 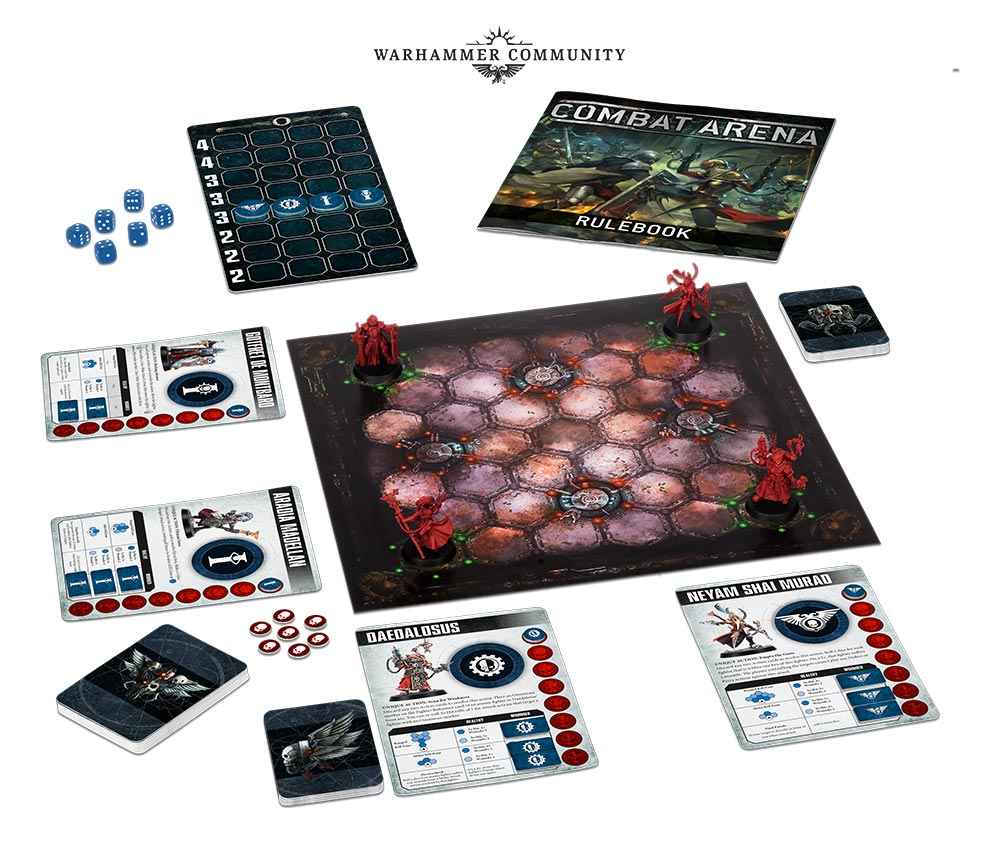 The game might well be a complete dud, but I’m definitely willing to give it a try. Most importantly, though, the game is bringing to us five new plastic miniatures of iconic figures from Warhammer 40k, from the Primaris Psyker to a third Rogue Trader mini! 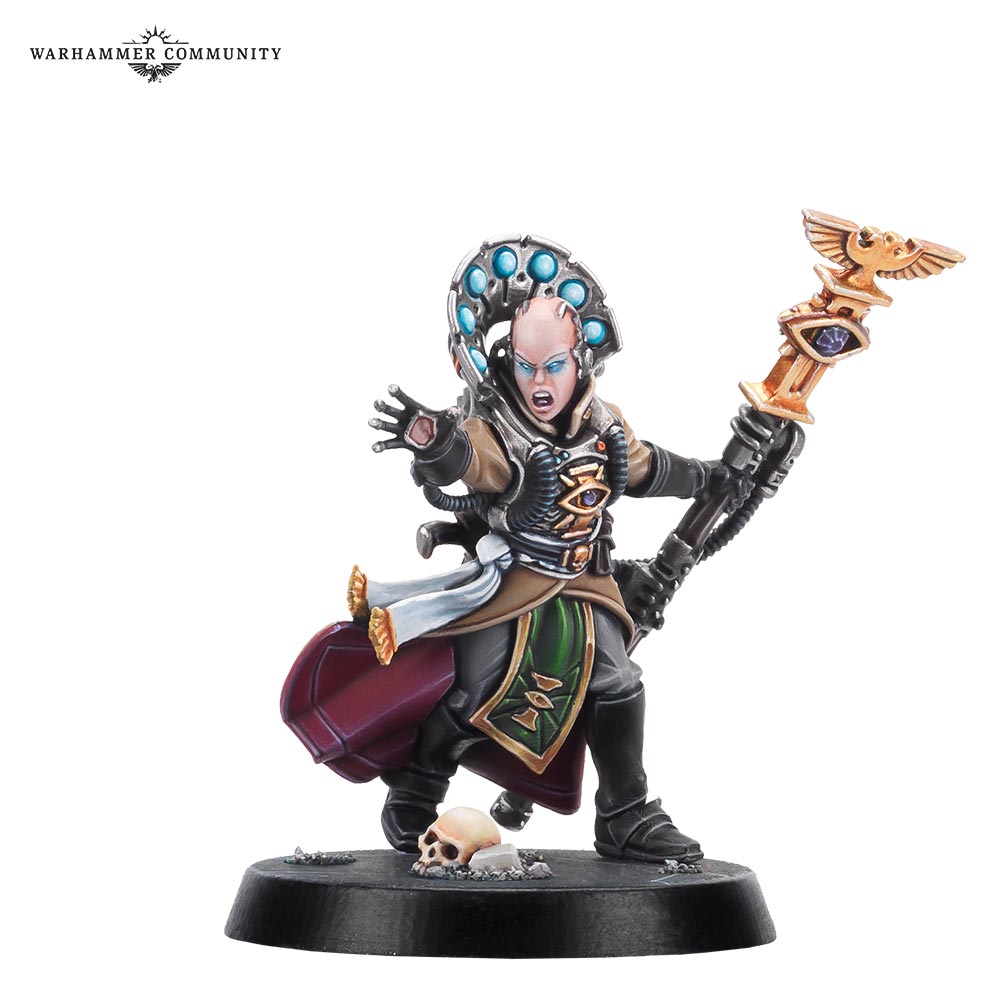 Apparently, this is a prequel to the Blackstone Fortress game, and these minis will feature in an upcoming adventure pack. What on earth does that even mean? They’re going to be coming out in a Blackstone Fortress-branded box, so we shouldn’t buy this game if we want the minis? Or will they start to release rules for existing minis to be used in Blackstone Fortress, simply as card packs or whatever? The basing for all of the minis previewed at the event has the same scheme as the other game, so it very much looks like it’s a tie-in, but I’m not sure I quite get it at the moment. 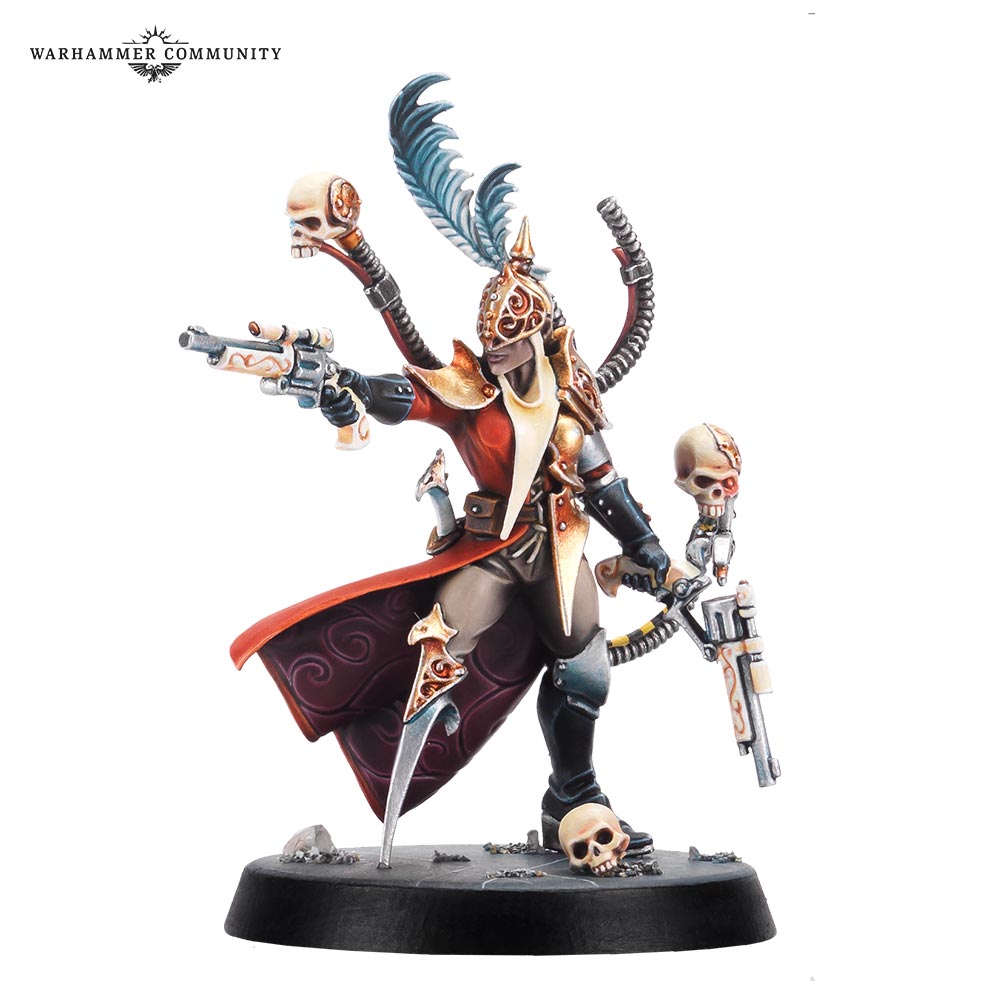 Anyway, the minis look fantastic, and I really can’t wait to get them in my collection. I really appreciate how interesting GW is making their universe through the introduction of new models or re-imagined sculpts for classic models within these sorts of boardgames. I hope we see more stuff like this come out for a long time to come, as we see all manner of weird and wonderful creations for the game. And yes, of course I would like to have rules for 40k included, and maybe even crossover rules for Blackstone Fortress and Kill Team as well. I’ve already been working on building a Chaos force that uses all of the weird stuff from Blackstone Fortress, and I’m still thinking about how to fit the Elucidian Starstriders into an Imperium list – I don’t care if they aren’t competitive, I just love the fact that the lore is being fleshed out on the tabletop, and the more esoteric corners of the 40k universe are being explored in this manner!

You know what else I’m really enjoying about this announcement? The fact that we’re seeing Games Workshop actually beginning to realise the promise of their own company name, and produce a whole smorgasbord of games for us to feast upon. When the FFG licence ended, I was a bit disappointed because I have enjoyed their offerings in the board game, card game and RPG formats for a long while. Thinking that GW might only want to concentrate on their big three tabletop wargames, I was anticipating a lack of anything further. But here we are, with a whole slew of new games as well as new takes on the existing games stable, and I think it’s just glorious! Combat Arena or Storm Vault may well be throwaway games that people only buy for the minis and never once look at the game itself – heck, I pretty much did that with Gangs of Commorragh when that came out, though I have still got all of the game material for that one waiting for me to one day take a better look at it. But there are so many games being produced now with incredible new miniatures that they can probably afford to have a couple of duds on the shelf. If Combat Arena is only remembered as the place where that sweet new peg-leg Rogue Trader first came out, then that’s fine, because we still have stuff like Warhammer Underworlds, Necromunda, Blackstone Fortress and the like that have been, from all accounts, runaway success stories. But if people are still enjoying Combat Arena years from now, and either clamouring for official rules for Sly Marbo to be written, or playing with fan-made rules for using a Genestealer Patriarch, then that is awesome, too. The important thing to take from this, I feel, is that Games Workshop are trying, and I love them for it!

4 thoughts on “A Workshop of Games!”