Hey everybody!
In yesterday’s hobby update blog, I mentioned the Deathwatch progress would be explored more in a post today, so ta-da! Time to talk about what I’ve been up to with the alien-hunting elite!

Trying to paint for just half an hour each night, to see where it gets me. Some good progress is being made! #Warhammer40k #Deathwatch #SpaceMarines #WatchCaptain #WatchCaptainArtemis #WatchMaster #KillTeam #GamesWorkshop

At the start of the year, my gaming buddy Kev suggested trying our collective hand at going to a doubles tournament this year, which sounded like a fun idea at first, though I had no real inclination just how competitive Kev could be! Sure, whenever we’ve played I’ve usually been demolished by his lists, but still! His main army is Deathwatch, though he started Grey Knights for Kill Team (it was against those models I had my first KT games, as Genestealer Cult – and got demolished), which he has now branched out into a more full-fledged army. Having so much Deathwatch of my own that I’d like to get moving with, we pretty quickly settled on a Deathwatch/Grey Knights combined army for this theoretical tournament.

The main issue I’m coming up against, of course, is that I’m just not that competitive! Kev knows Deathwatch inside out, and has been giving me a lot of tips and advice, but I keep feeling like I’m looking at an army choice that I wouldn’t necessarily like to field. I suppose it’s natural, going to a tournament, that you’d be looking at getting the best units in the army, but even so, I feel like I’m missing out on a lot of “my sort” of models, because they probably aren’t that competitive.

I last talked about the Deathwatch thoughts I had been having at the back end of December, with this list being the one I had settled upon:

Well, that has been through no less than five re-writes, and currently looks more like this:

I keep playing around with this, of course – in part because I want to fit in a Razorback with twin assault cannons for 116 points, now that I’ve bought the Inquisition rhino doors from Forge World! But I think this is where I’ll be concentrating my Deathwatch endeavours for the time being.

Army Make Up
The plan for this is the first group of six veterans will be used to camp objectives, and possible play bodyguard for the Watch Master if he decides to do anything out of the ordinary. Having a terminator in the list should hopefully act as a suitable deterrent, I’m thinking, too. The second group of five veterans will be used more for distraction/mid-field harassment, and will be equipped with hellfire rounds for more damage output. The final group of seven veterans will act more flexibly, moving around the field to position where they’re needed most. These and the first group will have kraken bolts in their weapons to increase their threat range.

The vanguard veterans will work alongside the watch captain to drop in where required. The variety of pistols will hopefully form a suitable threat level for them, as well as providing a decent distraction when they show up. Finally, the Dreadnought is in there for the stratagem, as well as added threat.

A few thoughts
I’ve never played Marines of any flavour before, being much more used (in recent times) to the Dark Eldar way of getting absolutely wrecked, so needing to swarm the field to ensure enough chaps survive to do anything. I’m used to big lists, even at 1000 points, so I was a bit surprised to find out how few units I would get in here if I went for a really optimised build. I like infantry, though, and I prefer to keep this as an actual miniatures game rather than having massive stuff in the army just because. Luckily, of course, Deathwatch don’t easily have access to such stuff. I’m staying away from Primaris, because I think all of the other Deathwatch stuff looks fantastic enough, and while I’ve not been able to fit my beloved Chaplain model in the list, there’s always time yet for that!

I’m almost constantly told that the frag cannon is king of the list, though at 25 points each, I’m always a bit wary. I’ve probably mentioned this in my Dark Eldar ramblings, but any time a weapon starts to cost more than the guy who wields it, I get a bit twitchy. Including so many instances of this in the army feels really quite wrong to me. But as I am often reminded in these situations – Marines have got a much better toughness and save characteristic than space elves, so I don’t really need to worry on that level.

I’m often caught up with how exciting Deathwatch Veterans seem on paper, and have until this current iteration of the list forgotten that I actually need five of the basic Veterans in a squad before I can start adding Terminators or any other fancy chaps. Oops! So that has been a learning curve. It also took the article series on frontline gaming to get me to realise that mixed teams of Veterans is usually not a good idea. True, I have seven veterans in this list who have mixed weapons, but there is a point to them, insofar as they’re intended to be a more flexible unit. By keeping all of the heavy weapons in one team, and the assault weapons in another, it helps to make the tactical use of these units easier.

I think this has been a big eye-opener for me, and in a way is linked with what I was talking about earlier. I might be disappointed that I can’t get “my sort” of units in the list, or whatever, but if it means the army works better as a result, then isn’t that the important thing here? We are talking about going to a competitive tournament, after all! There has got to be an expectation of winning, even if it might not be likely given that it’s a first for both of us!

Shenanigans
Deathwatch look beautiful, with some very unique models, considering they’re just a little bit fancier Space Marines. They’re also confusing as all hell to me though, because of the fancy ammunition they have, as well as the Chapter Tactics equivalent they get, Mission Tactics. Mission Tactics give you bonuses for going up against specific unit types, such as HQs or Troops, and while these two are probably guaranteed to be on the opposing side, picking a bonus to going up against Elites or Fast Attack might be more of a waste – hence the Watch Master’s ability to switch up the Tactic you’re using, so he’s very useful in the army.

Special Issue Ammunition is one of these things that has been needlessly getting me tied up in knots – it’s not actually that complicated, it just allows you to get a bonus on any attacks made by a bolt weapon in the squad. All members of the squad use the same fancy bullets, so it’s not even like there will be excessive book-keeping to do. It just feels like one of these things that might confuse me, though! It certainly has the potential, of course… 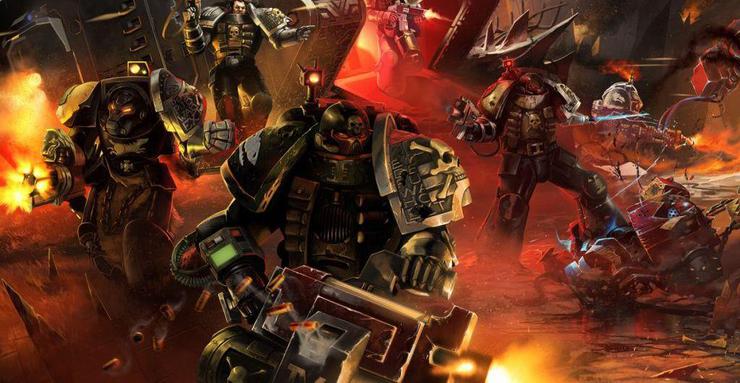 All in all, I think I’m enjoying getting some of these chaps painted, because the models really do look fantastic. However, I feel a bit like it’s incumbent upon me to get all of them painted up, and I have to get playing games with them to practice for the tournament, so I’m starting to feel less inclined towards them at the moment! I’ve got a lot of stuff on the go, after all, and I’m finding myself wanting to get going with that instead – Grey Knights, for instance, and I’m once more thinking about stuff like the Skitarii, or maybe Dark Angels.

This is starting to sound like a rant, isn’t it?!

Having had these minis since Overkill and Death Masque, I’m really excited about the prospect of finally getting to play with them and see what it’s like to wield that glorious 3+ armour save. It is a project that should look damn fine when it’s finished, I hope, and I’ll definitely be keeping you all posted along the way!