Hey everybody!
So yesterday, I was talking about some of my thoughts around some new army builds that I’ve had going round in my mind for the last few days. There have been a lot of such thoughts, so it’s been a busy process! 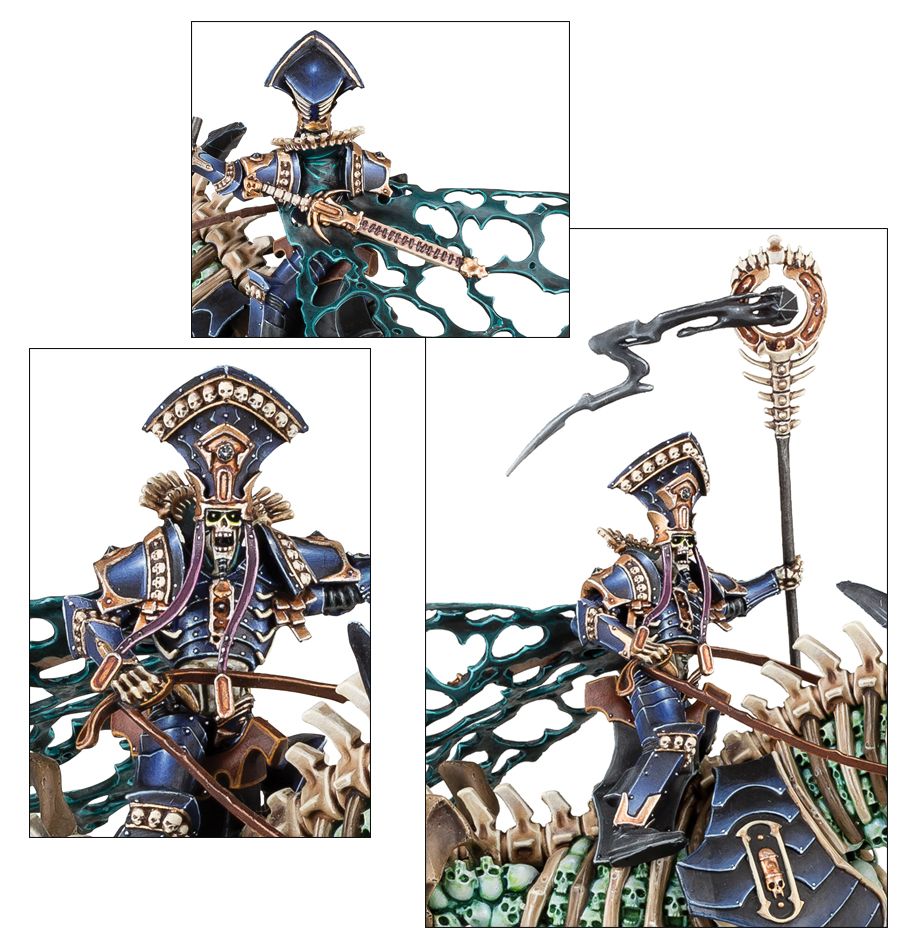 To begin, I want to talk about my plans for a Legions of Nagash army. This has pretty much evolved out of the desire to build up Arkhan the Black – I’ve loved this model since he came out, and have wanted to do something with it despite having bought and sold it twice! When I first had it, I was leaning towards Neferata, though now that I’m thinking more in terms of the rules and how I want the model to work within the wider context of an army, I think Arkhan would work well with the magic emphasis and so on.

Wanting the model to go alongside my existing Nighthaunt project, it seems like I need to go with Legions of Nagash and then ally the majority of the Nighthaunt in – luckily, everything from the Soul Wars box can be put into the army, so it’s not too much to faff about with.

I love the Spirit Hosts, as well, so I wanted to use a lot of them – and luckily they’re already in the battletome, so no need for this allies stuff! I’m currently splitting the battleline units between the Chainrasps and the Skeleton Warriors, the usual battleline units for the undead.

I really enjoy the Legions of Nagash battletome, and I was quite impressed at the number of options available when first flicking through it. However, when it came time to actually go through the rules for everything, I felt a little bit underwhelmed. I’ve gone for the Legion of Sacrament because of the fact that Arkhan is in the list, but it was really surprisingly difficult to come up with the organisation of it all. I’ve given Arkhan the command trait Dark Acolyte, which basically allows him to know one more spell. Being a wizard, of course, he knows all of the spells of Death Wizards within 18″ of him, so he can also benefit from the Guardian of Souls, so I’ve gone for a couple of quite offensive spells to help keep the enemy at bay. Well, we’ll see!

I’m still going with the Nighthaunt for now, of course, but I’m really looking forward to adding some more skeletons to the ghosts in time! And maybe one day…

Along with the ghosts, I’m wanting to get myself moving with the Idoneth Deepkin that I started building up late last year. Much like with planning the Legions of Nagash, I’ve been finding it quite difficult to come up with an actual army list. Some things really felt quite natural to go together, such as the Namarti Thralls along with the Soulrender. But it has proven quite difficult to get something more of a cohesive army that I would like to play with. I mean, I like the sorts of armies that have a lot of variety in the units – just look at the Legions of Nagash army above! – but the Deepkin feel like the sort of force that would quite happily be made up of massive amounts of the same sort of unit, be that Thralls or Guard.

I’ve chosen the Mor’phann Enclave, more because I like the colour scheme of blues and purples, but it also adds a buff to the Soulrender bringing Namarti models back. Again, I found it difficult to pick artefacts and command traits to ascribe to the units, so I have just gone a bit generic for the time being, while I build up the army and attempt to get some games in to try to get the hang of what they all want to do.

More so than any other Age of Sigmar army that I’ve come across so far, I feel the Deepkin might benefit from having allies within the force, especially Sylvaneth. Daughters of Khaine would be a wonderful excuse to start getting myself some snake ladies, of course, but I can see myself getting some Kurnoth Hunters sooner or later to pepper into the force.

It’s been really interesting to me, getting back into Age of Sigmar after all this time. If you remember, I was really into it back when the system first launched, despite so much negativity being leveled at it across the internet. Painting up a massive amount of Stormcast Eternals was quite a joy, now that I look back, though I never really got into the actual gaming side of things before 40k took over my life. I think this is in part due to the fact that the fantasy scene at my local GW is highly competitive, with most of the players regularly taking part in all manner of tournaments and whatnot. The opportunity to have small-scale games just for fun were very few and far between, and I would get quite nervous even thinking about playing. So I think it’s been really nice that I’ve been able to find at least a couple of people locally who are now getting into it all at the same time, and have smaller-scale, casual games where it’s not too dramatic as we’re only playing for the fun of it, and all that.

Had my first game of #AgeOfSigmar 2.0 today, #Nighthaunt vs #Maggotkin – just a 500pt skirmish as we'd both never played before, but it was a lot of fun, and given me a lot of food for thought with both my army and the game as a whole! Overall, not a bad day off work! #Warhammer #GamesWorkshop #Nurgle #SoulWars #fantasy #gaming #playingWarhammer

I suppose it’s an aspect of the hobby that I don’t always talk about, but I do get quite nervous when meeting new people to play games with, as I think part of me is concerned whether they’ll be taking it too seriously, and whether I’ll just annoy them with my casual attitude, etc. But I do tend to over-think some things like this!!

Going back to re-discovering the game, I think AoS 2.0 is a lot better than the first iteration of the game, just because of the depth gained from Allegiance Abilities and so forth. They’re basically Chapter Tactics for the fantasy world, of course, but I love the richness that we’ve gained from seeing these things, and while I have made a few comments up above about both Legions of Nagash and Idoneth Deepkin being a bit of a let-down in this regard, I do strongly feel this is more due to my lack of experience with both the game and each army, rather than any true reflection of things.

I’ve also been enjoying painting something different. 40k has been with me for so long now that I feel a bit of a release painting the ghosts, especially because they have such a fantastical feel to them. While of course there is always creative licence in these matters, I feel much more freedom when painting the fantasy minis to when I’m painting those for 40k. It’s been really quite fun so far, and I’m hoping that continues for a long time to come!