I’ve been inspired to take a look back at last year through all of the books that I read, most of which I’ve made some rambling posts about on this here blog, I think – so without further ado, let’s get started! 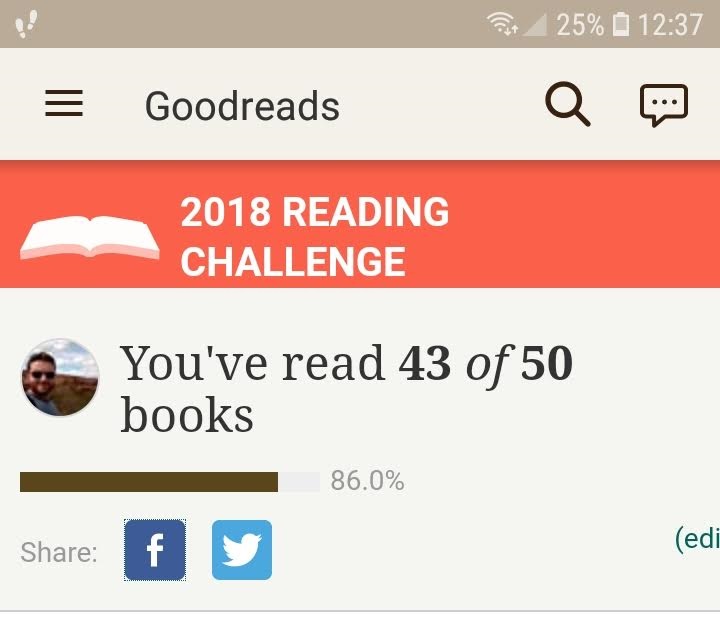 I’d been hoping for better from 2018, if I’m honest. My wife Jemma is a voracious reader, and easily got through a lot more than the 50 I’d set myself! I think it’s to do with the fact that she has a very focused ‘want to read’ list on goodreads, whereas I had a more casual approach to that.

February
The Devastation of Baal (Guy Haley)
Elephants Can Remember (Agatha Christie)
Cult of the Warmason (CL Werner)
Aquaman and the Others: Legacy of Gold (Dan Jurgens)

May
Fear to Tread (James Swallow)
Star Wars: Out Among the Stars (Jason Aaron)
Star Wars: The Ashes of Jedha (Kieron Gillen)
Murder on the Orient Express (Agatha Christie)

Not a bad attempt, for sure! I’ve been reading a lot more broadly this year, in the main due to Jemma’s influence with trying to get me to read something more than Warhammer of Star Wars! So there’s a lot of crime stuff on here this year, historical crime in particular! For Christmas 2017, one of the things I had was the first book in the Matthew Shardlake series, Dissolution, and so have been reading my way through those, among the more regular fare. I’ve also read the second of the Mistborn series by Brandon Sanderson, Well of Ascension, while on holiday in Ireland for my now-brother in law’s wedding. The point of singling these out is that I’ve been reading my way through some quite weighty tomes, so I suppose that helps to explain the low numbers!

To help mitigate things, I’ve been reading some shorter stories, particularly the Horus Heresy stories at the end of the year, and also some comics – particularly when trying to catch up with the Star Wars books! Of course, I’ve been told off for calling these books by the wife, though I do feel there’s a lot to be said for comics, but that’s just me!! In compiling this list though, I was surprised at how many I’ve missed off writing up some thoughts, might have to try and get some of these done in the coming weeks!

Anyway, it’s been an exciting year for branching out, and all the rest of it, and I’m hoping for more excitement in the year to come!