Happy Christmas everybody!
Whether you’re celebrating in style, or just enjoying a pleasant Tuesday, I hope you’re all having a fabulous day. While it is Christmas Day for many, it’s also game day here at spalanz.com, and today I thought it would be a great time to take a look at one of the classics – and take the opportunity to finish a series of board game reviews that has been on hiatus for nearly three years! Let’s take a look at the fifth and final big-box expansion for Runebound: Mists of Zanaga.

Mists of Zanaga is a jungle-themed expansion for the classic fantasy adventure game from Fantasy Flight, and was released all the way back in 2010. In the same theme as previous big-box expansions, such as its predecessor The Frozen Wastes, we are transported to a new realm within Mennara. The game’s storyline involves the survivors of the Dragon Wars sailing across the ocean and finding the mythical lost realm of Zanaga, populated by the jungle-dwelling makhim, and the singhara of the savannahs, as well as savage orcs and savage barbarians who live in the ruins of a lizardmen empire.

Beneath this land dwells the demon Tarakhe, whose taint has touched the land with pollution. We have met this primal force in the previous expansion Island of Dread, where it was known as Assif Shib-Sa. The makhim have devised a plan to rid their lands of the taint of Tarakhe by awakening one of the other primal gods who created Zanaga, in the hope that the two deities will defeat one another…

As with all big-box expansions for Runebound, we get a new gaming board as well as new heroes, new adventure decks, new items to buy, and a couple of new mechanics. The expansion should be noted for having possibly the best ever design for the back of its adventure cards, but anyway!

The new mechanics for this game involve the Rituals – these cards, like the adventure decks, are coloured green through to red. Whenever you draw an encounter, you add a Ritual token to the card – when defeated, the token is placed on a Ritual card with a corresponding icon. When these ritual cards are completed, they are used to determine which ancient god will be awoken to defeat Tarakhe. After the first three Ritual cards have determined the god you will face in the final showdown, that god’s card is flipped to its Omen side, and further completed Rituals will trigger the effects of these Omens until the players can confront the god himself. 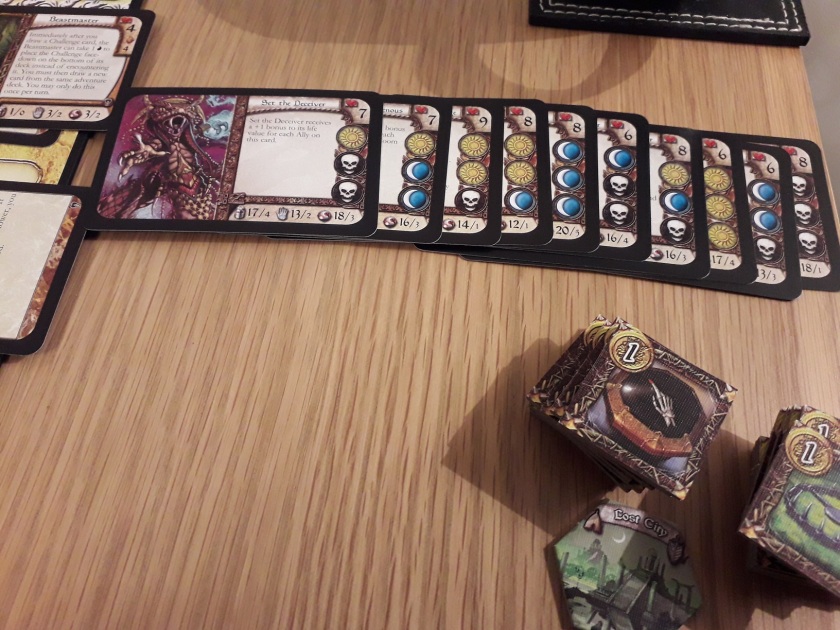 Moving around the board is pretty much the same as we have come to expect, and we also get survival gear as is common for the big-box expansions. Crucially, there is also a Lost City token that comes into play when certain Rituals are completed – you need to be on the Lost City space in order to confront the ancient deity.

While the game is basically Runebound but with different characters and adventures, I find myself completely drawn in to the theme of these expansions, and I rarely find myself feeling like I’m having the same gameplay experience with each one. However, while Frozen Wastes feels cold, and Sands of Al-kalim feels hot, Mists of Zanaga doesn’t really have the same sort of environmental feel to it, as weird as that may be to say about a board game. The closest this one comes to having something global going on is the Roaming Monster track, which effectively replaces the Undefeated Monster track, re-implementing the idea in an interesting way.

Each monster encounter card features a terrain symbol on the right-hand side. If you don’t manage to defeat the monster, it goes along the bottom of the board on the Roaming Monster track. In subsequent turns, if you end your movement in a hex that does not feature an encounter or a market, you must check if your terrain matches any of the Roaming Monsters; if it does, then you have to encounter that monster, if not then you draw a new card and add it to the track. It does add an element of danger to the game, in that it does get you thinking about how you’re going to move this turn in the same way that the cold mechanic in Frozen Wastes and day/night mechanic in Sands of Al-kalim makes you think like that. The new survival gear we get in this expansion allows you to re-draw encounters, escape encounters, or change the results of the movement dice in order to make this easier, however, so there is that.

All in all, Mists of Zanaga is a solid expansion for the game. It feels somewhat like the least complex of the big-box expansions we have available, though at the same time the Ritual mechanic is perhaps the most intense of all the new things we have seen. I suppose it is this that sets the expansion apart from all the others, as it strives for an Aztec/Mesoamerican flavour to the storyline, which does come through quite well to my Euro-centric way of looking at things. There are some classic fantasy tropes for the jungle setting such as lizardmen and frogmen, and I think jungle-fantasy is not often done so that this expansion gets a definite feel of uniqueness to it.

The mechanic of awakening primal gods has often felt a bit like Arkham Horror to me, probably due to the terminology used rather than anything else. The talk of Omens and Awakening Gods has the definite feel of one of the many games from the Lovecraftian stable of FFG, to my mind! Gameplay-wise, of course, the game is very definitely Runebound.

With no further expansions for Runebound Third Edition since Unbreakable Bonds in July 2017, the future of Runebound itself is a bit shaky.  I don’t really want to see it go away, but I feel to some extent like this type of game has had its day. I talked about the culture of making boardgames more accessible in my Runewars blog earlier this month, and while I do kind of see a place for games like that, I’m not sure about those like Runebound. I suppose there are just more streamlined adventure boardgames out there now, and Runebound just feels a bit like it belongs where it belongs. People do like mass army games, but I think the adventure boardgame needs something more than Runebound can provide. The Witcher was a case in point, where the theme to some extent drives the game. I’m not entirely sure about Runebound, which has been continually lambasted for its vague, generic, bland fantasy setting. Personally, I love it, but that is more to do with my own history with the game. Looking objectively at it now, there is very little to help it stand out from the crowd. It definitely belongs to another time, and I think that could well be why FFG are choosing to look at new ways of implementing the Terrinoth setting, such as the RPG and the new card game, Heroes of Terrinoth.

2 thoughts on “Mists of Zanaga”