Hey everybody!
I’ve lately been reading the first novel in the Enforcer series, Crossfire, by Matthew Farrer, along with fellow blogger wordaholicsanonymous, and finally managed to finish it last night. I say “finally”, like it’s been a chore to get through, but nothing could be further from the truth! 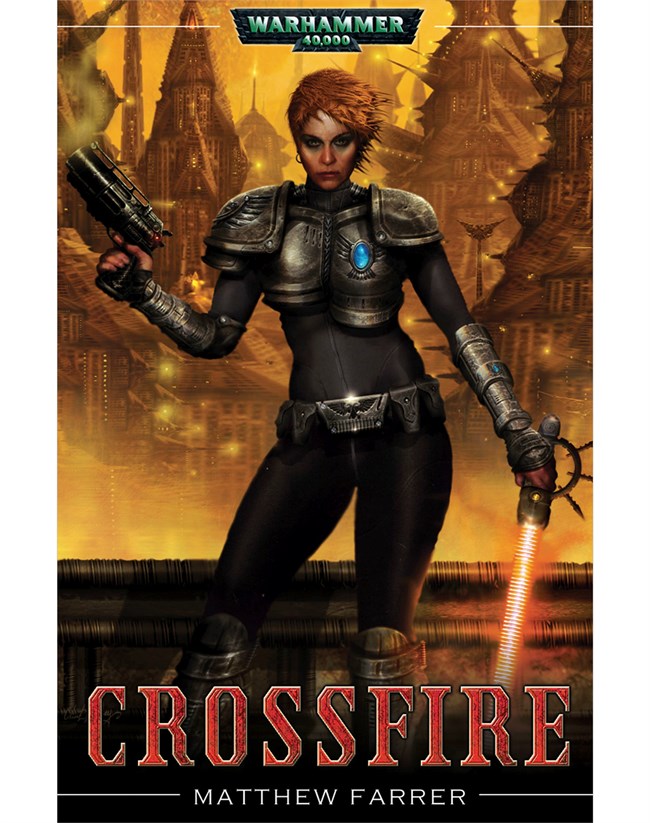 The first book introduces us to Shira Calpurnia, a senior member of the Adeptus Arbites, as she takes up her new posting on the planet of Hydraphur. The Arbites are a classic element of Warhammer 40k lore, the enforcers of the series title, basically the police force of 40k, though with the sort of grim dark twist that you can obviously expect! They are, as the name might suggest, Judges, and live by the maxim, “we determine the guilty, we decide the punishment”. So if they decide that you’re guilty, and the crime committed deserves death, they’ll just shoot you point blank right between the eyes, and be done with it.

The Adeptus Arbites was featured in the original 40k source material, with their look and several fluff ideas directly derived from the popular 2000AD comic line (and some elements of design from RoboCop). In game terms, while they have been a firm favourite in Necromunda, they did have a presence in regular 40k during third edition, when they actually had army options thanks to the Citadel Journal. Later editions would relegate them to using proxy rules from things such as Inquisition Storm Troopers, then Astra Militarum Veterans. Currently, there is no actual 40k ruleset for these minis, though the feeling is strong that GW will be bringing out new models for the latest incarnation of Necromunda soon, which may see a spill-over into the regular tabletop game.

The classic line-up of Arbites with shotguns, power mauls and suppression shields – and not forgetting, the cyber-mastiff! 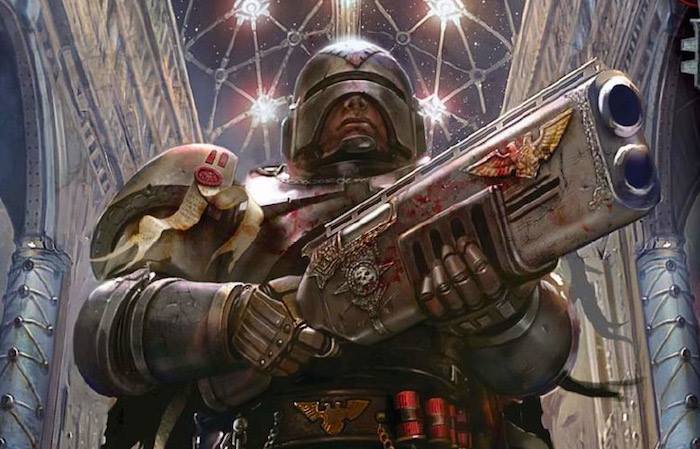 Crossfire is set against the backdrop of a religious festival, the Mass of St Balronas, with the preparations for each of the twelve days detailed prior to each chapter. Shira arrives on Hydraphur and is almost immediately targeted by an assassin, who turns out to be a rogue psyker. The search for the would-be-assassin’s employer leads Shira throughout the hive city, where other acts of sabotage are initially thought to be linked with the psyker’s attempt to kill her. The situation is further complicated by the local politics of Hydraphur, which has a strong Imperial Navy presence, and questions of jurisdiction come to the fore during the the investigation.

Without trying to give the ending away, there is a fairly explosive conclusion to the novel, with Shira tracking down the culprit at great personal cost.

I really liked this book, as it was such a different change of pace for the 40k setting – kind of like a police drama in space, but due to the fact it dealt more with the little people, it had a real feel of “proper” science fiction to it. We get to learn a fair amount about the life and role of the Arbitrators in 40k, which I enjoyed – even if I did find myself thinking of it in terms of what models we’re likely to see if and when they get made! We also get to meet an Inquisitor, who almost feels like he’s there primarily to butt heads with the Arbites, and several Sisters of Battle, which is always a nice inclusion in 40k books. Hydraphur seems to be a bit of a nexus for several branches of the Adeptus, with the Ministorum being chief among them. As such, there is a lot of the gothic aspects of 40k prevalent throughout the story, large chunks of which take place in the massive cathedral. We don’t get a great deal of info on the Ministorum, as the novel is told exclusively from Shira’s standpoint, so they’re primarily also there to butt heads with, but it was still nice to have these smaller sections of the lore take a prominent part.

It’s also nice to have this sort of character study for a 40k novel. We get that with some of the stuff like the Eisenhorn trilogy, where we’re following a single person, and I suppose it’s much easier to do this with one of the “little people” rather than, say, a Space Marine Captain. The Devastation of Baal was a good book, for sure, but it’s somewhat difficult to relate to the oldest living Space Marine as a central character. Shira, on the other hand, is just a police officer trying to adjust to her life in a new precinct. Of course, it’s more than just that, but at its core there is a really interesting story about this one person, as she comes to grips with the local way of life, and it was really cool to see.

I’ve been reading quite a bit of 40k stuff lately, which has almost ignored the rich setting and grim dark feel of the place in favour of pitched battle after pitched battle. Having the background of the religious festival really helped to cement the sort of world-building that I’ve come to enjoy from 40k, and much more firmly fix the story within the universe proper. I mean, Of Honour and Iron was an interesting story enough, but so far as the setting goes, I feel like the book borrowed a lot of it from the fact it carried the 40k logo on the front, and made little-to-no attempt to set the story within the actual universe. Crossfire, on the other hand, takes quite a few pains to really embed the story within the lore, and I do appreciate it for that. Indeed, I think it has pointed out to me the amount of times some (but only some) authors of more recent 40k books have just used the shorthand of the 40k logo to bypass any need to set the grim dark tone.

I definitely enjoyed this book more than some of the other 40k novels I’ve been reading lately. Definitely recommended if you’re looking to delve more into the universe, rather than wanting a series of battles that could be taking place in any futuristic setting.