Hey everybody,
We’re getting closer and closer to the time when we’re finally going to see the Genestealer Cult codex drop, so it’s about time I started to think about my own uprising in the name of the four-armed emperor, as I feel like I’ve got these gribblies coming out of my ears right now!

Thinking about my favourite minis that I've painted this year and, while I've painted up my entire Dark Eldar army this year (and enjoyed almost every single model in that force), I think this pair has to be top of my list. Get ready for 2018, and the year of the four-armed emperor! #Tyranids #Warhammer40k #GenestealerCults

I’ve been a fan of these Cultists for a long time now, and their release in the autumn of 2016 was just a fantastic time to be in the hobby, as we got to see so many classic 40k ideas come into plastic form with these guys. I wouldn’t say that the Cultists necessarily brought about that kind of grimdark renaissance, but it feels a bit like their return has paved the way for more of the mundane side of 40k life to come to the fore, with things like the Necromunda minis and Rogue Trader for Kill Team. It’s a side of the universe that isn’t all about massive Knights or plasma cannons and stuff; instead, it’s the little people with their crappy guns gathering up en masse.

With the new Codex, which I believe current speculation is placing at the end of January for a release, we’re expecting to see a slew of new models, mainly of the Cultists on bikes, but also a couple more HQs such as the gunslinger Primus, and the chap planning his invasion of Warhammer World. I really can’t wait to get my hands on these guys!

My own force has been causing me agonies for a while now, as I had initially planned to have a two-part army consisting of the mining cult and the guardsmen cult, the latter allowing for all manner of tanks.

I’ve since moved away from this idea, instead thinking about fielding them with a detachment of Tyranids, so that they will be fighting alongside the big bugs they worship. I’ve decided to paint the Tyranids that I’m keeping in the same colour as the classic genestealer colourscheme of blue and purple, so I think they’ll fit in alongside them quite nicely.

This summer, I was really quite focused on getting at least some units for the Cult fully painted up, and managed to get a grand total of two units finished. This was partly due to Kill Team, of course, where I initially wanted to play the Cultists, though that didn’t really end well for me! So I managed to get eleven Neophytes finished (one squad of ten, plus an icon bearer), as well as a squad of five Acolytes, and one Purestrain! Hurrah!

The Acolytes in particular were quite pleasing to get done, as they are some very beautiful models with a classic Cultist look to them. However, special mention must go to the Neophytes, perhaps the best-looking troops choice in the entire game right now!

Having started to paint some of these back when Deathwatch Overkill came out years ago, I've finally arrived at the point where I'm happy with these chaps. They're not perfect, sure, but they're a decent start to my #KillTeam 🙄 #Warhammer40k #GenestealerCult #NeophyteHybrids #paintingWarhammer #xenos #fourarmedemperor #GamesWorkshop #Tyranids

These guys have been haunting me since Deathwatch: Overkill came out, and I started my work on painting up a cult of them back in 2016. They are incredibly detailed for troops, with loads of pouches and straps all over the place, and I found it really heavy-going trying to make a decent stab of it with them – so much so, in fact, that earlier this year I was thinking about trying an alternative scheme to make life easier for myself! But I’m sticking with my now-established Cult of the Bladed Cog, so hopefully soon I’ll be able to crack on and get more of these glorious miniatures painted – I mean, it’s not like I don’t have enough waiting for me in the wings…

This is quite a ridiculous number of Genestealer Cultists, I feel, though by the same token, I suppose it’s pretty average for what basically amounts to a horde army. With the amount of crappy weaponry available to them, Neophytes are possibly best spammed to the max, so it was on this basis that I started to play around with an army list for them at the back end of 2017.

So what have I actually got here? Going off the Index points values, of course, I’ve surprised myself by having well over 1700 points of these guys, so that’s quite impressive! Though most of that comes from the 60 Neophytes that I’m not sure I’ll ever need. But still, it’s nice to have them for that horde feel! 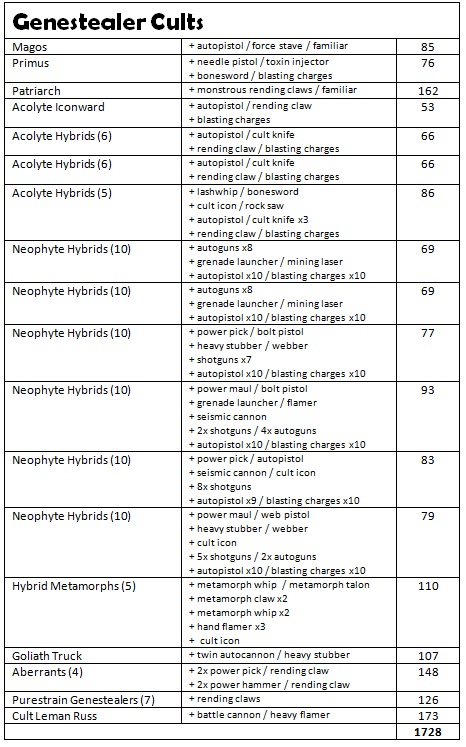 The list will hopefully come down a bit when we finally get our Codex, anyway, so it was one of my driving reasons for getting this blog published sooner rather than later, as I wanted to put this out here beforehand to see how it compares when the book hits. There are a couple of changes that I’d like to make, for sure, and I think I’d like to get some more Metamorphs but not use quite so many Acolytes, so there is a certain element of flux here. I think I’ll probably be giving this some more thought over the festive period, anyway, as I’ve very much built a list out of everything I have here, rather than thinking about what I actually want out of the army and then building the models to match the list.

And things will no doubt change again when the Codex comes out, and we get those awesome new models to go alongside!

Giving some thought to my #GenestealerCults army this evening, in anticipation of finally getting the Codex #Warhammer40k #Tyranids