Hey everybody!
It’s been an interesting couple of days for me, as I’ve been trying to implement my plans to get stuff painted – so far, so good, but I have been noticing the fact that I’m actually feeling in the mood to try different things all the time, and I’m finding it difficult to stay focused. It’s always the trouble, I guess, when trying to do something like this, as you risk not being productive because you’re instead in the mood for something else.

For me, right now that something else is Grey Knights!

I’ve talked about my Deathwatch plans here not too long ago, of course, and I’ve been thinking a lot about that army and maybe making some addition to it, trying to incorporate the more weird and wonderful elements of the Imperium. Something that always attracts me to 40k is the gothic grimdark look of it all, and the smaller factions of the Imperium such as the Adeptus Ministorum and the Inquisition really pull me in for their weird and wonderful aesthetic. We’re probably another year away from getting anything associated with the Adepta Sororitas, which I would imagine to include all manner of Priests and other wonderful bits, but the 40k-adjacent stuff like Blackstone Fortress has provided us already with some of the more obscure stuff, with the promise of more to come, and I love it! But today, after about a week of turning it over in my mind, I went and bought the Codex and a Strike Squad.

I’d originally bought a Purifier Squad in 2016, but only got as far as this bad boy before selling it off as another abandoned project (though I did use the swords for some Alpha Legion Chosen back when I was building an army of those sneaky chaps). I had some serious painting issues in 2016, as I kept going wider and wider with my projects, and ended up selling off a whole load of things I’d partially finished or finished entirely. It wasn’t really until I wrote that blog about the Inquisition the other week that I began to think about doing anything remotely linked to Chapter 666.

I’ve played against Grey Knights in Kill Team, and it was shocking (though I was playing as Genestealer Cults, so there is that…) I’m definitely looking forward to making up a small detachment of daemon-hunters to add to my xenos-hunting Deathwatch, anyway!

Mention of Genestealer Cults brings me on to today’s preview of the new Vigilus Defiant campaign book over on the Community site. The book is bringing out some specialist detachments for armies in all three branches of play, and it sounds amazing. Rather than having the crazy special rules of 7th edition, or merely having points attached to them like Age of Sigmar, detachments in 8th edition are bought using Command Points, and merely unlock further Stratagems, Relics and Warlord Traits that you can give to your units within that specialist detachment. It’s a bit early to say, for sure, but it sounds like it should be a really nice addition to the game and, so long as they don’t use this as an excuse to drive sales of miniatures that aren’t doing so well at retail, or try to balance the meta by bringing out more and more insane detachments, I think it should be good. 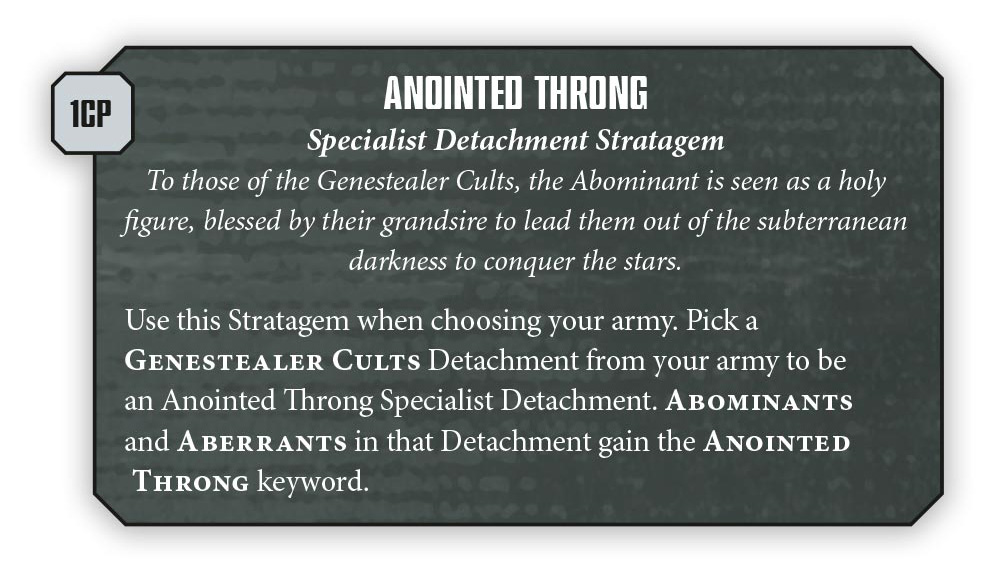 Giving a select few units access to some cool new stuff sounds like a fun idea, anyway, and from the look of the preview article, it sounds like they’re definitely aiming for theme more than anything else. Of course, that can always go one of two ways, so I suppose it will just be a case of waiting to see how all of this pans out…

That’s not all on the Community site today though – we also got a pdf with Kill Team rules for the miniatures within Blackstone Fortress, which is really nice! While there have been no firm promises to provide Blackstone Fortress rules for the Kill Team Rogue Trader stuff, it’s still good to see the level of crossover within these games, and I like the fact they’re available for free.

While the explorers all have specific armies they slot into (mainly Imperium ones, though obviously Tau and Eldar feature), the adversaries all slot into their own Servants of the Abyss faction, and I’m definitely going to be looking at building a list with these guys soon enough!! I’m thinking a Rogue Psyker, some Negavolt Cultists, maybe a Black Legionnaire, and a few Traitor Guard to round it out to 100 points. Should be interesting – I’ve played against psykers in Kill Team of course, but the psychic phase in general is one that I tend to avoid!

Finally, I started to read the Enforcer omnibus the other day – so far, it’s been excellent, so I hope that the quality continues! I’m probably only going to read the first book in the trilogy for now, as I’m also itching to get back to the Horus Heresy, but had been reading far too much about the Iron Warriors lately, so felt the need for a palette cleanse before I get back to it with Angel Exterminatus!

Look out for my review soon, anyway, along with progress with the Grey Knights!

6 thoughts on “The Grey Knights, and more!”