Oh my goodness, this thing is just phenomenal. I’m trying to look at this with a lot more objectivity than my usual fanboy garglings, but let’s be honest, the reveals that we’ve seen so far coming from Nottingham are really blowing the world wide open as regards what’s next for 40k! 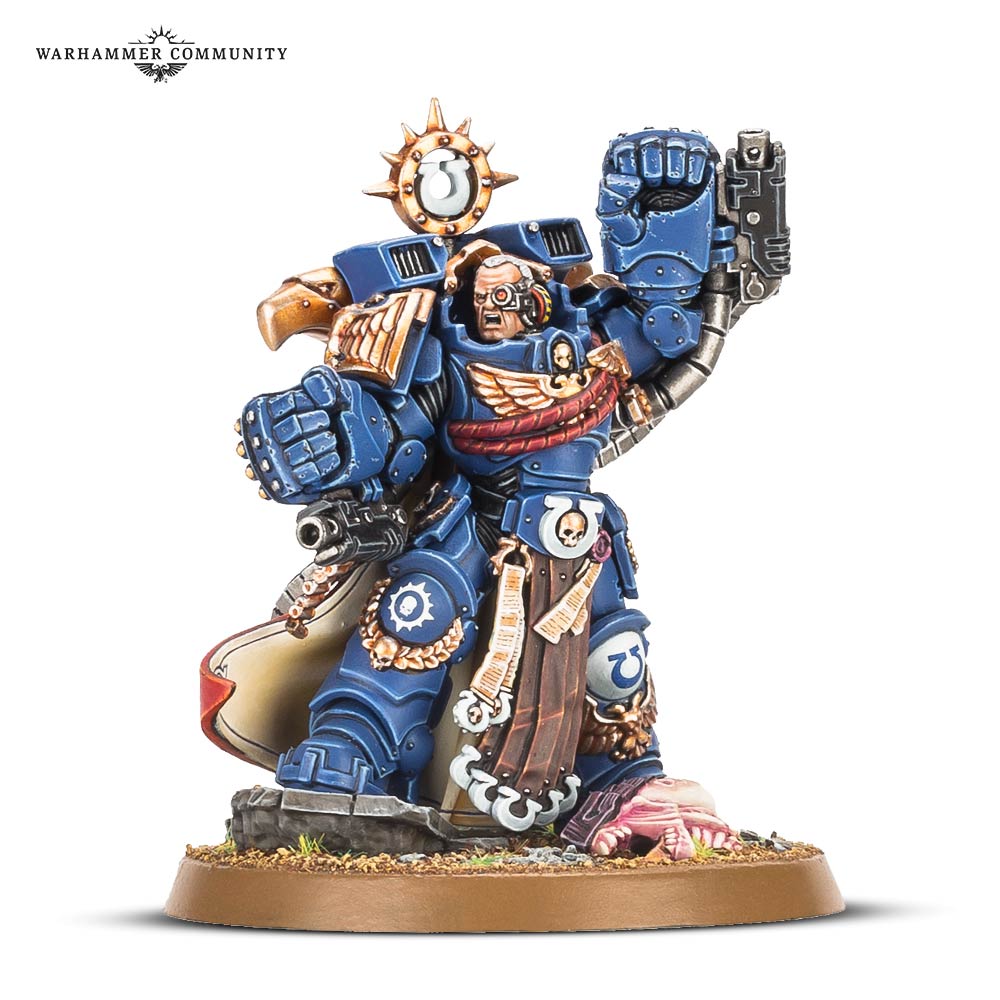 So first of all, Marneus Calgar is getting a new model, Primaris-style, and he looks quite sensational. I’ve been really quite up-and-down with the Primaris marines taking over the regular chaps, given that I’ve invested so much already into that line, and while my initial thought was that this does indeed signal the end for the classic space marines, as Calgar is “the first to be reborn as a Primaris Space Marine”. Hm.

But, you know what? I’m pretty fine with this now. The Primaris range feels quite bland, given the fact that we can’t customize a squad as we could with the classic Tactical Marine Squad, but they really do look good, so I’m fine with peppering my army with some more of these guys. I’ve been wanting to paint up my marines as various successor chapters to the Ultramarines, and now I think I have the perfect character model around which to do so!

Bring on the Primaris!

So not only do we have Ultramarines, but we’re also getting Black Legion, in the form of “the sinister herald”, Haarken Worldclaimer. Weird name, but whatever. I like the fact that we’re getting a character model for these guys as well, and the fact that Vigilus has been declared to fall to the Warmaster in 80 days could possibly mean that we will indeed be getting a new Abaddon model, when he turns up to claim the world!

I think Calgar coming in Primaris form does mean we’ll be getting more characters, rather than merely generic Lieutenant #48, so I’m hopeful that GW will see their game and their world does benefit from having more named characters that we as gamers and general lore enthusiasts can get behind. So it’ll be exciting to see what comes next! 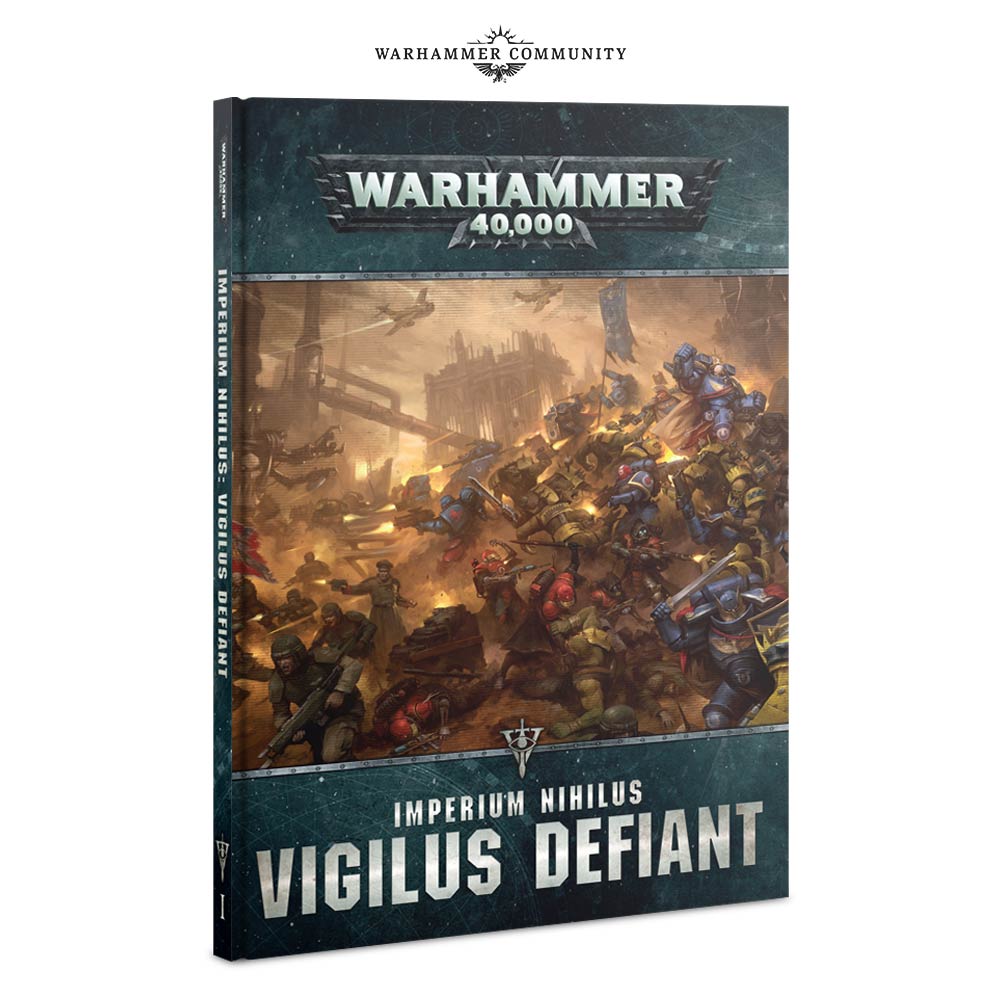 The main feature, for me, is the new campaign book, Vigilus Defiant, which is going to include the rules for these new minis (and more, apparently…) This is what I’ve been waiting for now that the Codexes are almost done, and this is what has got me most excited for the world of 40k to come!

Towards the end of 7th edition, we saw a number of these things come out, starting with Shield of Baal, and taking in the Tau expansions and the War of the Fang. These books featured campaigns with lore, missions and new rules, so I would totally love to see them return to this model to further expand the game.

And look! Marneus Calgar comes with his Honour Guard once more! This is all just excellent stuff!

But it’s cool, because it means we won’t be getting second editions of Codexes in order to update them with a new unit or two. And we won’t have to wait for Chapter Approved once a year to get new stuff. Campaign books really do open up so many design opportunities that I cannot wait to see where this model takes us in 2019!! 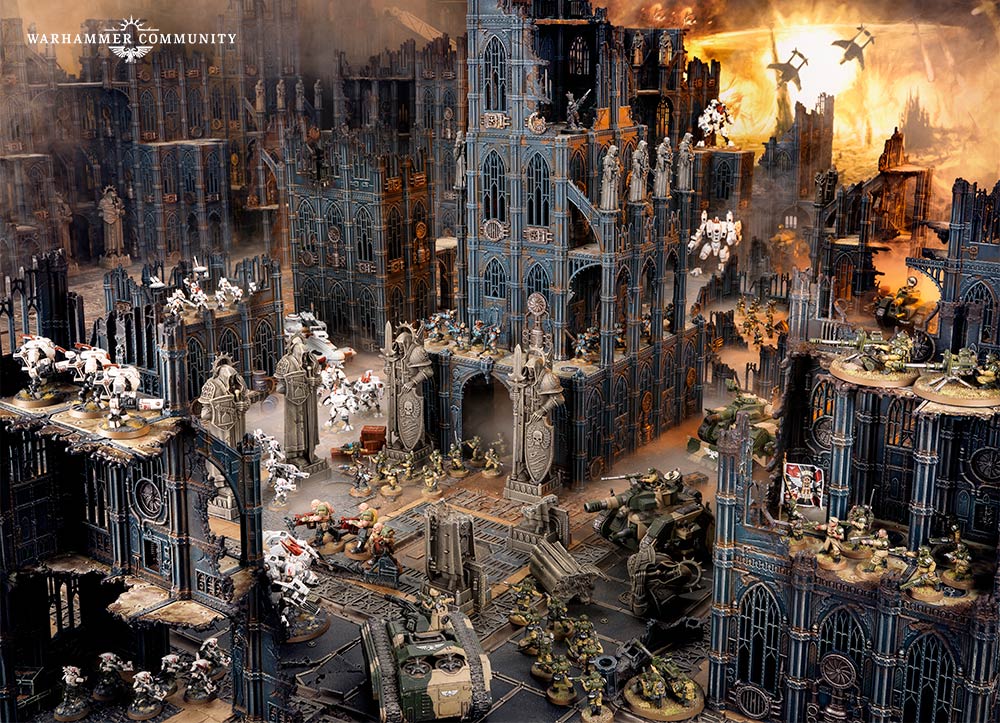 Looks like we’re also getting a boxed campaign next year around city fighting, which I’m not all that fussed about, but the teaser video looks like there may be some new terrain involved, which might be nice to have… Urgh, I am a sucker for the shiny new toys! 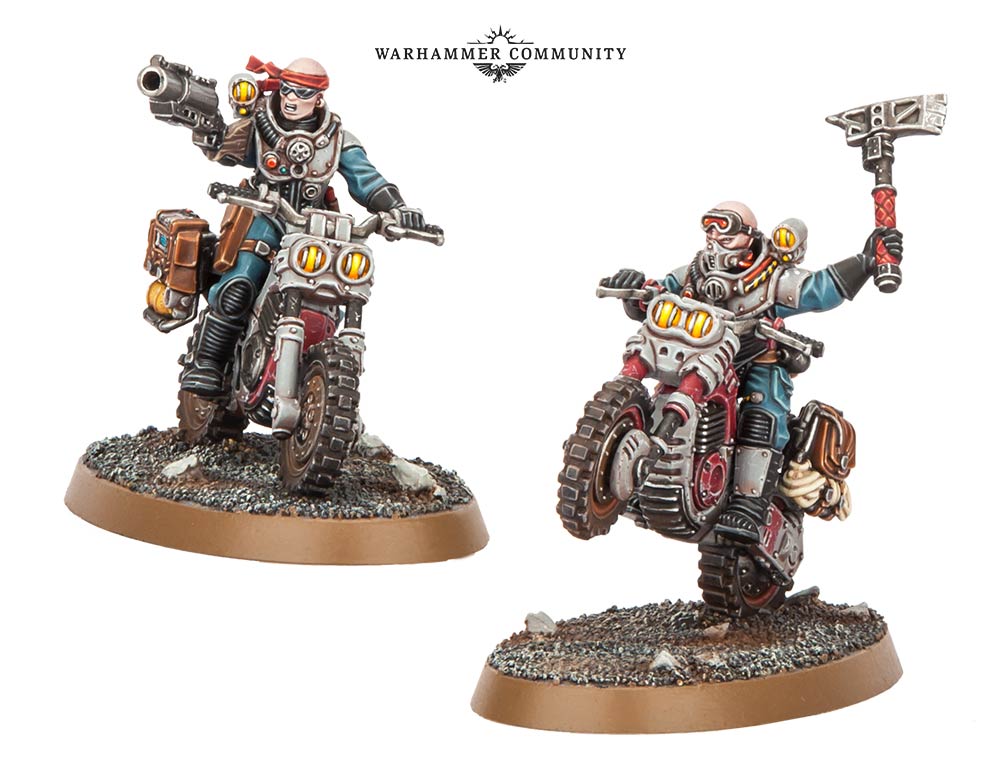 Finally, let’s talk some Genestealer Cults. I don’t think anybody could have seen Cultist bikers coming out, which is just spectacular if you ask me! Not only are we getting these chaps, but some of the photos making their way online from people at these events show a quad-bike will be coming, too! Part of me wonders if they’ll be usable in Speed Freeks, though not having that game, I wouldn’t be too disappointed if they weren’t. It is, however, an excellent way to capitalise on an existing game etc, while also expanding the galaxy in general.

I love this new GW!

These models are just tremendous, and I think the dirt-bike look really fits in with the mining aesthetic so it looks like a natural extension. So good!

The Genestealer Cults are coming – and it looks like they’ve been busy scrounging, scavenging and repurposing the works of the Imperium for their own nefarious purposes… #PaintingWarhammer

But the bikes aren’t all that’s coming, as we’re also getting another new character model, the Nexos!

I love the idea of having a sort of spymaster, co-ordinator-type chap as an army HQ (assuming he is, of course!) It really nicely plays to the dual-aspect of the Genestealer Cults, having him wearing the regular mining gear, yet looking so much like the army commander (planning to infiltrate Warhammer World, no less!) – it’s definitely a model that I’m looking forward to adding to my collection, whatever his rules! We also know that the gunslinger Primus was on show at the event, so I’m hopeful we’ll get all of these new things in the Codex. Whenever that shows up! 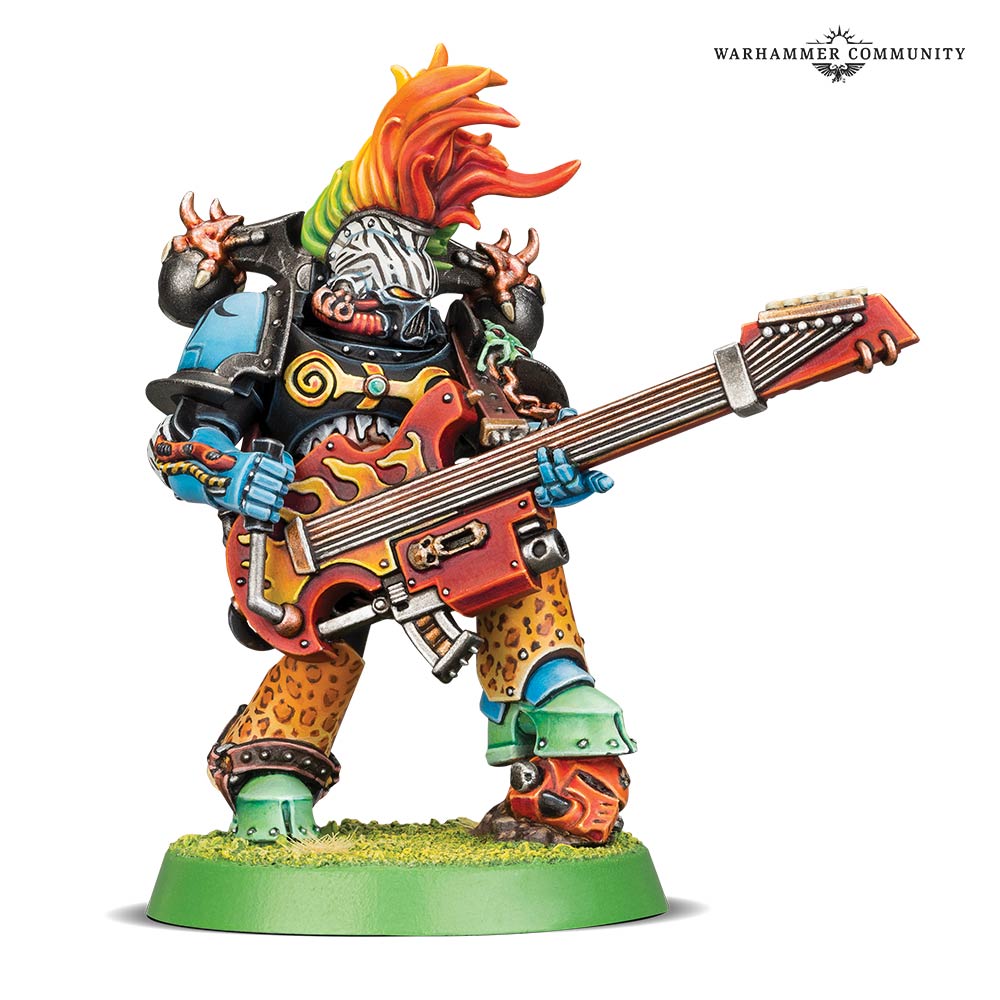 Ah yes, Noise Marines might be back! The Christmas exclusive model is no less a re-imagining of a classic, and while I don’t know if this is supposed to herald a new Emperor’s Children release (Sly Marbo was never the start of anything last year…) it’s exciting to think we might just be getting the third Legion coming out soon in plastic!

We’ve also got some wonderful new Slaanesh models (and Khorne, as well) from the Wrath & Rapture box, including a new Herald playing the harp. Because who doesn’t want some lilting melodies in the middle of battle?

I’m really trying hard not to get suckered into starting a Slaanesh army again, but these models definitely hold an allure for me, I might just have to get that Harpist on ebay to paint. So wonderfully sinister!

So, along with yet another Knight, that was the Vigilus Open Day! What do you think? I’m impressed overall, if the campaign book structure becomes the new delivery method for models to make it into the game – especially for re-worked models like Marneus Calgar and Abaddon (when he eventually arrives), then I think this is the start of something tremendous, and should really help to free up some creative spirit for the designers over there in Nottingham. The Genestealer stuff was just wonderful, and really excited me, as it took me back to those heady days when they had their initial release for 7th edition, and I was excited to start a Cultist army of my own! So I’m really looking forward to those models coming out – given the fact that the campaign book and the models for Marneus and Haarkon are set to come out in December, I’m guessing that we’ll have to wait until January at least for the Genestealer Cults Codex, but I have so much to get built and painted, it’s hardly like I have an army waiting to be played! Might add some more Cultists to the painting roster then, methinks!

They promised us that “something big” was coming. Do you think any of this could count as that? The campaign thing is big, for sure, and while I’m excited for the models, I would have thought, if they were treating the Genestealer Cults announcements as the “something big”, it would have been the full Codex release, and not just some new model teases. The new Knight is, of course, enormous, and mocks the concept of a miniatures game, but I don’t know…

It’s got to be the re-imagining of Marneus Calgar, but I feel like they have somehow missed the mark, and it could have been more. Or bigger. Or both. Or maybe I’m just expecting too much these days! I love the Genestealer Cultist models, and I love the campaign system – I just thought we’d have something different, I guess.

What do you guys think?

4 thoughts on “The Vigilus Weekender!”